Accessibility links
'You've Got To Risk It': How Tragedy Inspired St. Louis Singer Tonina's Artistry Truly a rose grown out of the concrete, Tonina's artistry is a glaring reflection of her tumultuous journey told through unblemished vocal range and the sounds of intermingling cultures.

'You've Got To Risk It': How Tragedy Inspired St. Louis Singer Tonina's Artistry

'You've Got To Risk It': How Tragedy Inspired St. Louis Singer Tonina's Artistry 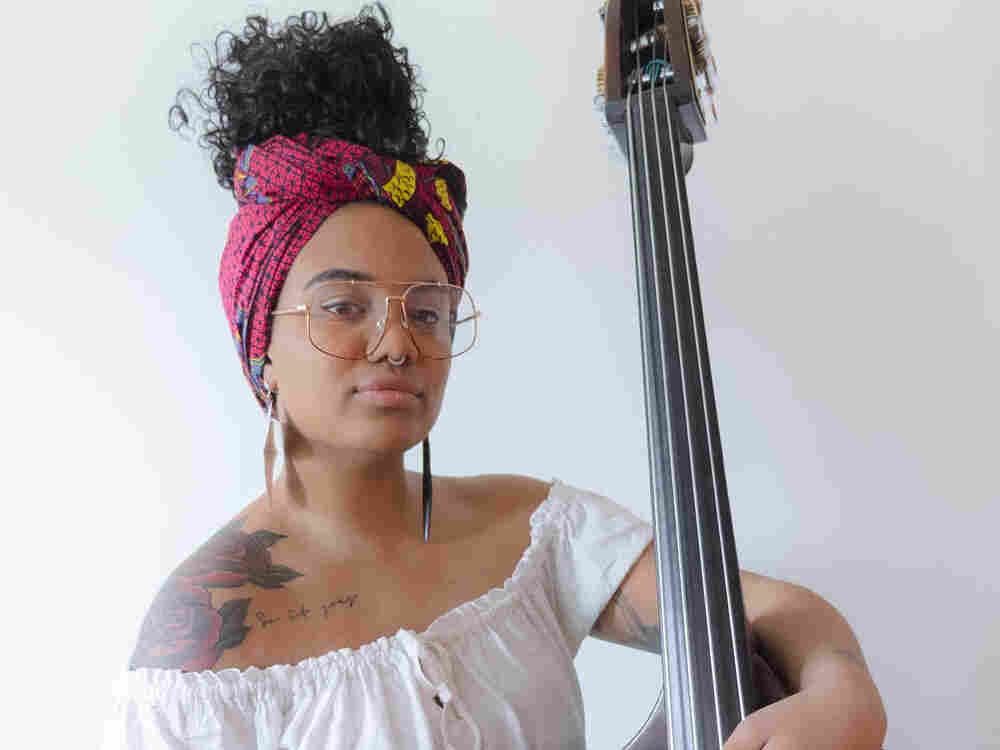 "I truly believe folk music is the heart of people, the music of the people," Tonina Saputo says. "That's what I consider — myself a folk musician. I'm not a jazz musician at all." Courtesy of the artist hide caption 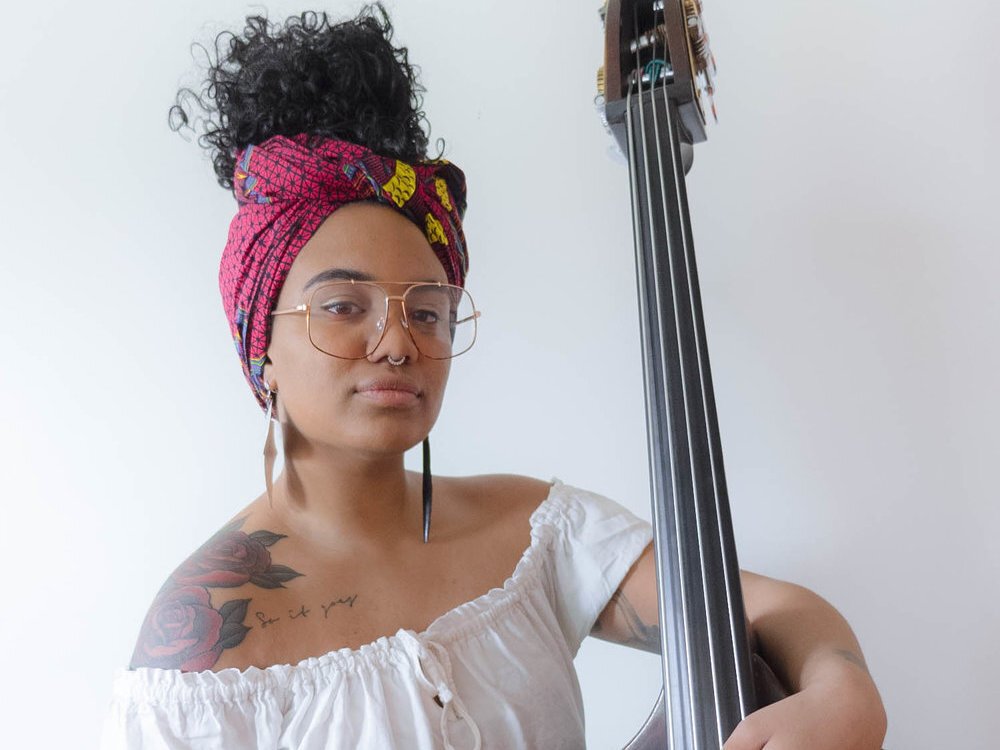 "I truly believe folk music is the heart of people, the music of the people," Tonina Saputo says. "That's what I consider — myself a folk musician. I'm not a jazz musician at all."

"It's really an amazing and tragic thing that blossomed. But ... if he didn't die, I wouldn't be here," Tonina Saputo says. "And that's nuts to think about. From tragedy there could be something born."

Tonina, a singer, songwriter, bassist and poet, is referring to the 1991 plane crash that killed her uncle, St. Louis musician Tony Saputo, along with seven other members of Reba McEntire's band.

"The plane crashed near San Diego and my mom flew out from (St. Louis) to see where her brother died on the mountain," Tonina says. "And my father was in charge of the search and recovery effort. So they met on top of the mountain. They named me after my uncle Tony."

Tonina is already hard at work on that legacy. A classically trained bassist from childhood, she is a recent graduate of the Berklee College of Music with an album under her belt, another in progress, a European tour behind her and gigs all over town.

"I really do think of my purpose as in being able to carry on a legacy of my uncle and what he would do if he was able to play music in the physical world. That's a lot of inspiration for me. And when I say my name to people in the music community, especially the jazz community, they'll say 'Oh, are you Tony Saputo's family?' It feels good," she says.

Depending on where and when you see Tonina perform, you will get a different experience. "If I'm playing a more intimate show and the place is appropriate for my bass, I'll just bring my bass and guitar. But sometimes it's just full guitar. Some of my songs I can't play on bass. Some of my songs I can't play on guitar. And then some venues I tend not to bring my upright because my upright is my baby. His name is Chauncey. We've been together for 13 or 14 years. And my parents had to work a lot of extra shifts to pay him off. So I'm not bringing him into a dive bar, that's for dang sure," she laughs.

Her first foray into music was at age 6. Her father and another one of her uncles, both musicians who "just play anything you put in front of them," gave her a guitar. "I didn't like it. I didn't want to do it. I didn't have time. I wanted to watch Cartoon Network," she remembers.

But later, as her older siblings played instruments, things changed. "My dad played the bass. I wanted to be like him. He told me, 'Don't do that. Be like your sister and play violin.' I chose bass."

Though dedicated to the bass, she later taught herself to play guitar during the summer between high school and college because she knew she would need it for songwriting. "I mostly write on guitar just because it's a chordal instrument and it's easier to compose that way."

As a black-presenting multicultural woman who sings primarily in Spanish, Tonina has faced an interesting and frustrating phenomenon.

"Here and in Spain people call me Esperanza Spalding, just because I'm another of color woman with an upright bass. And then they call me Tracy Chapman, who I love. I didn't realize how nuts it was until people from different countries were telling me the same thing," she says. "I was like, 'Wow this is very interesting but it's so false because I don't play anything like Esperanza. I don't play the same music. We don't sing alike. She is amazing at her thing. I'm good at my thing. And, Tracy Chapman? I love her. [But] don't sound anything like her.'

"Why don't people call me Sting? I'm much closer to Sting than I am to Esperanza, honestly," she adds. "But when they haven't seen a person of color playing ... it just shows their limited view of black female musicians. I was the same way; I couldn't name a black female musician when I was younger. It's really messed up. I want to change that."

Beyond race, she also challenges perceptions by rejecting the concept of typical genre categorization.

"I truly believe folk music is the heart of people, the music of the people. That's what I consider myself — a folk musician. I'm not a jazz musician at all. I think people just categorize me as that because of my instrument. I am a bassist who sings and I sing my songs and do arrangements of covers. None of them are jazz."

I truly believe folk music is the heart of people, the music of the people. That's what I consider —myself a folk musician.

Tonina taught herself Spanish as a girl in order to emulate one of her biggest musical influences. "I love Selena. I've been thinking about getting a tattoo of her."

Tonina finds deep inspiration in Selena's story of a young girl essentially creating her own musical genre, Tejano, and crossing cultural divides. "Selena brought Spanish speaking music to such a wide audience," she says. "When she sang in English and in Spanish she brought a crowd. And it was amazing. And that fact that we don't have that now is so messed up. So I want to do it. We are so close as a people geographically. We should be embracing that music!"

Tonina grew up speaking English and Sicilian. She chooses to largely perform in Spanish because she wants her music to be for everyone, though worries that it has the opposite effect on English-speaking American audiences. "At first, people are like, 'Oh cool' and they're trying to detect what language I'm speaking. But then after a while, I see like kind of confusion."

Tonina names Lauryn Hill as another major influence, both as a musician and her storytelling approach to writing. "She was one of the first black women I saw playing guitar. I had never seen that before. It was a huge inspiration."

While she grew up speaking Sicilian, she hadn't publicly sang in the language until her recent two-week European tour. "At my European shows, for my encores I sang a traditional Sicilian song and it was magical because I sang a capella and then everyone chimed in. I felt welcomed because I was really nervous and I didn't know if they would be offended because I'm not 100 percent culturally Sicilian. It warmed my heart. That was the highlight of my tour."

The European tour was arranged by Javier Limon, a renowned Latin Grammy Award-winning recording artist and producer, who met and signed to Tonina to his Spanish label, Casa Limon, while she was studying at Berklee's Valencia, Spain campus. "He's a genius. He can write a song so quickly that is beautiful and doesn't sound rushed. I really respect him as a producer and a writer and all of the above." Together they produced the album Black Angels which features Tonina singing Limon's music.

She also is working in St. Louis on creating a different sound for her next album. Her first St. Louis project will be an album with the working title of "St. Lost" — a collection of songs written when she was living in Boston.

"It's a whole identity thing ... I wrote while I was feeling homesick, reflecting on my relationships with friends and family and my city."

Tonina says her songwriting is generally more influenced by her voracious reading habits instead of personal reflection.

"I love Toni Morrison. I'm trying to read all of her books. I love bell hooks. I like to mix it up – fiction, non-fiction, fiction, non-fiction, some essays. James Baldwin is my biggest, him and Richard Wright are my two males. I rarely read heterosexual males. I've heard enough of their perspectives," Tonina says as she excitedly shares her favorite books, ranging from Twilight to Wuthering Heights. Songs will often be about a character in a book or even a pair of personified blue jeans.

Her upcoming album will fully reflect her range of musical ability from writing charts, selecting her band.

"I'm completely in charge," she says. "Being a woman band leader can be so annoying. It's not like you're sitting in a board room where people have to shut up when you're talking – which they don't always do anyway. But in rehearsal when you're trying to get the part right and you have to call someone out who's not doing it ..." she laughs. "It was more of an issue in college. Especially in jazz classes and it sucked, because often you're the only female in class."

By choosing her own band, she is able to circumvent some of those issues.

"I have experienced it with people I've asked to sub. And it's like 'never again.' I'm super strict. I have things to do. I have dates. I don't have time to babysit ... Especially if I'm paying you."

Though she was born in San Diego, California, Saputo counts St. Louis as her home, having grown up in Kirkwood. She currently resides in the Cherokee neighborhood of South St. Louis and is enjoying getting reacquainted with the area.

"I think I'm still fresh into the scene of me playing my music out," she says. "I want people to like my music and I want them to feel like there's music for all people. If someone doesn't speak English, I want to sing in their language, whatever it is. That's what I want to bring — Spanish, Italian, English to other countries ... I wish I could have a crystal ball and see how I'm going to be perceived and how my music is going to be received. But you've just got to risk it."