Accessibility links
The Stories We're Missing When We Focus On Trump's Supreme Court Pick It matters, because important stories are getting less attention, coverage and prominence than they should — a state of affairs likely to worsen in the weeks and months ahead. 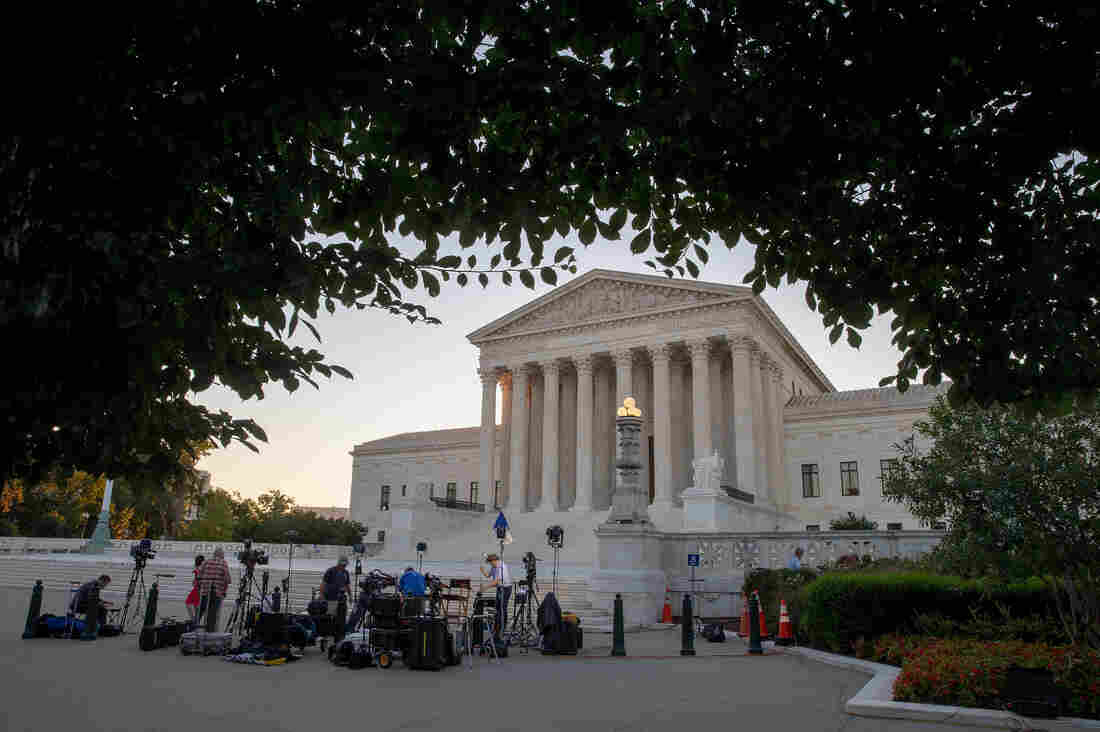 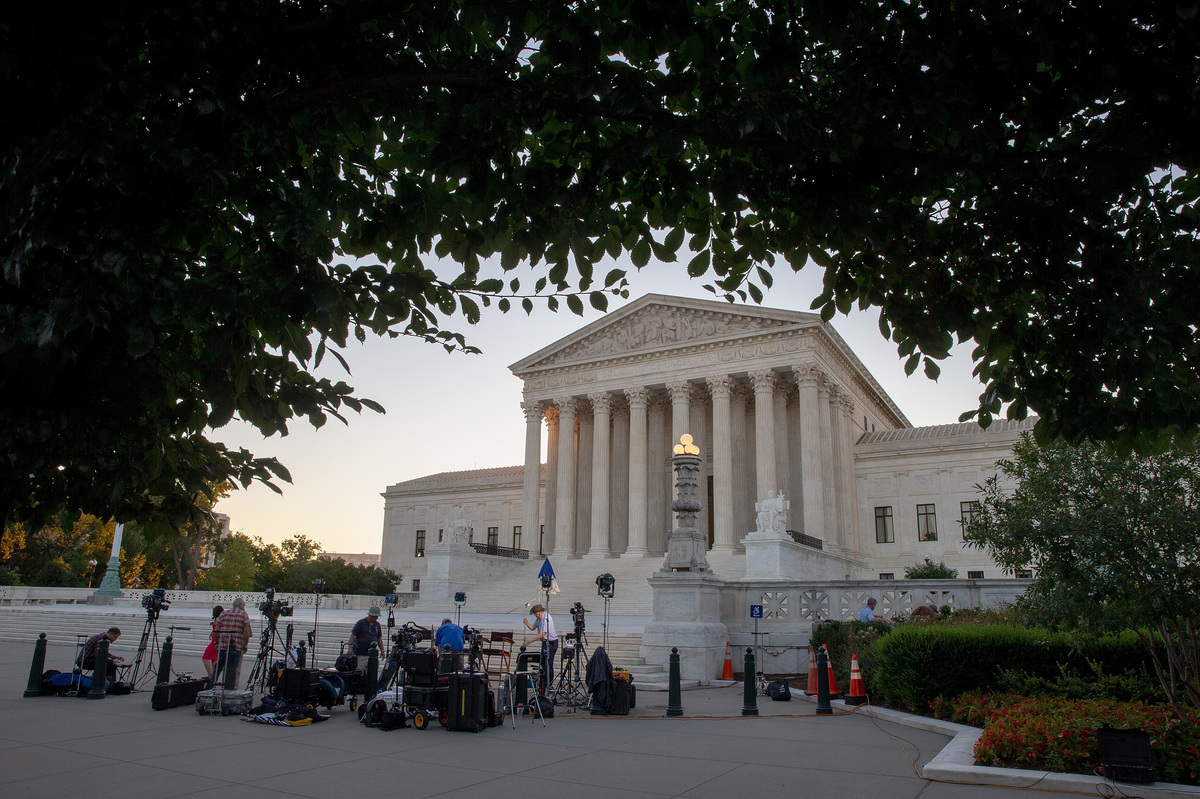 Journalists set up in front of the U.S. Supreme Court building on Monday in anticipation of President Trump's announcing his next Supreme Court nomination Monday evening.

But here it comes anyway, President Trump's latest choice to serve on the U.S. Supreme Court. At a minimum, that person will be the center of attention in Washington through much of the summer and fall, through Senate hearings and deliberations — after which the nominee is highly likely to be confirmed and to serve on the nation's highest court for decades.

When it comes to Washington news stories, it doesn't get much bigger than that.

But when it comes to news environments, this one was already overrich. The flow of news has swollen like a river that threatens to escape its banks.

Second Group Of 4 Boys Are Rescued From Thai Cave, After Long Ordeal

Set aside for the moment the drama that has the whole world transfixed: the improbable and dramatic rescue of a dozen young boys and their soccer coach from a flooded cave in Thailand.

Set aside the global obsession with the final rounds of the World Cup and the early matches at Wimbledon.

Speaking strictly of Washington government and politics, we already have more news than we can handle.

It matters, because important stories are getting less attention, coverage and prominence than they should — a state of affairs likely to worsen in the weeks and months ahead.

What sorts of stories are we talking about? There are so many, any catalog is likely to omit a few. But let's throw out a random sample of continuing events that have to compete these days for the front page – or for even a mention on the evening news. 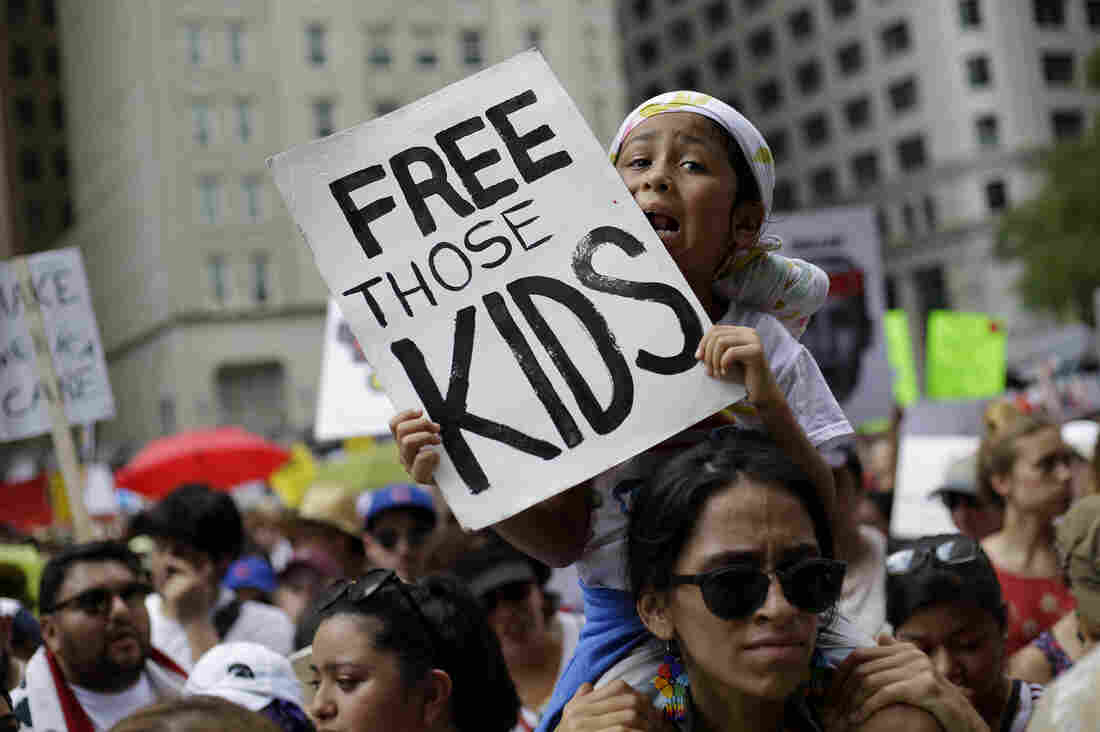 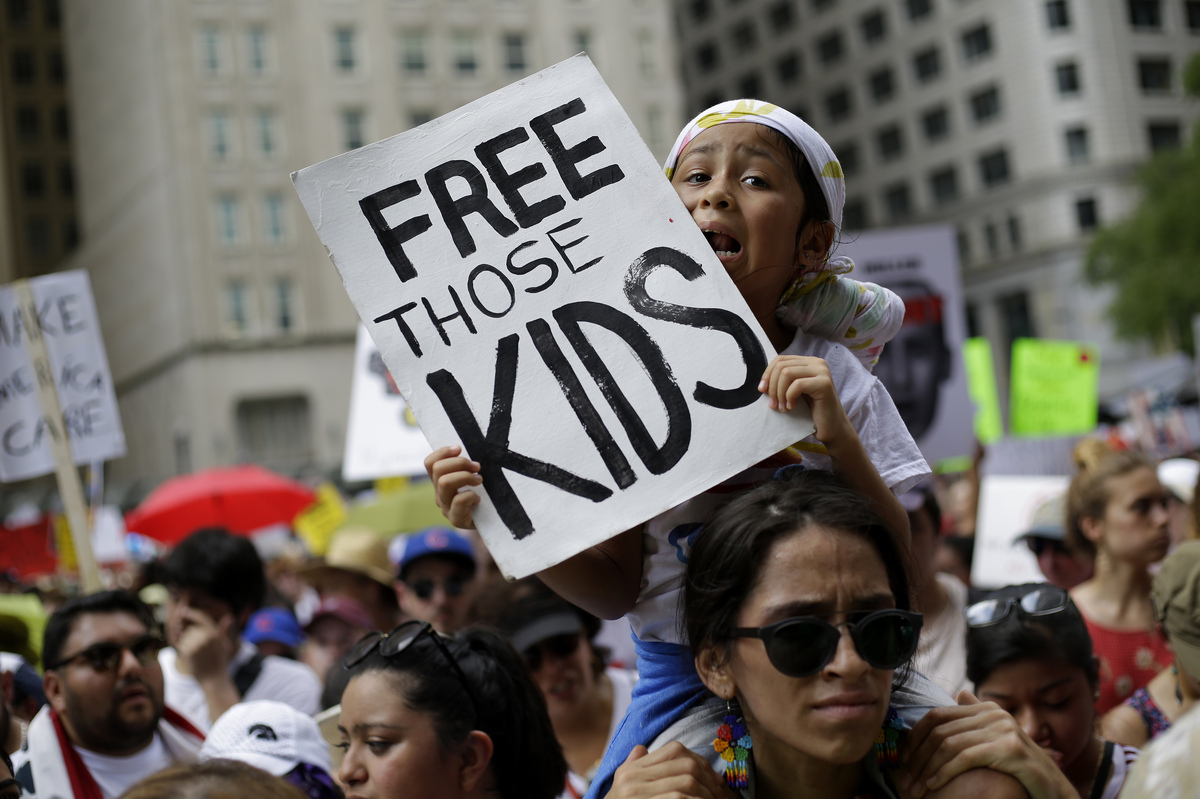 Demonstrators protest against Immigration and Customs Enforcement and the Trump administration's immigration policies at Daley Plaza in Chicago on June 30.

Separated families: The latest news has federal officials promising to reunite children and parents separated by the Trump administration's "zero tolerance" policy at the border for asylum-seekers as well as other arrivals from other countries. But thousands of children remain in custody apart from their families with no clear timetable for reunion. This has been a big story for weeks now, but it begins to recede as other stories arise.

North Korean meltdown: Over the weekend, North Korea lashed out at the U.S. and at Secretary of State Mike Pompeo, saying demands for a permanent end to that country's nuclear program were "gangsterlike" and destructive of the attitude of cooperation previously presumed to have followed the summit meaning in Singapore. Pompeo had said the talks had been "productive," but on Sunday he fired back, rejecting the North Korean criticism. The rapid deterioration in what was supposed to be a new era of negotiation and rapprochement undermined Trump's recent claims that the threat from North Korea was in the past.

Putin sitdown: Trump plans to go from his summit meeting with NATO allies next week to a one-on-one meeting with Russian President Vladimir Putin. NATO leaders and Putin regard each other as nemeses in world affairs, and Trump's highly public warming toward the Russian autocrat is viewed with alarm in Europe. Trump has rejected the idea that Putin still represents the old Soviet mindset of the KGB, which he once headed. At a rally last week he said: "Putin's fine. He's fine. We're all fine." The president has said repeatedly that the Russians deny interfering in U.S. electoral campaigns, despite the official reports to the contrary from the U.S. intelligence community and the U.S. Senate. He has also said he wants at least part of his meeting with his Russian counterpart to include only the two of them and the interpreters — no staff, no witnesses, no recording.

Stung By Trump At G-7, Allies Look For Better Outcome At NATO Summit

NATO blowup: Even apart from the Putin issue, Trump has riled relations with historic U.S. allies in Europe by sending a pre-meeting letter chastising them for what he calls inadequate defense spending. He has said he considers the NATO countries to be free riders on U.S. military capability and demanded that they do more for themselves. This comes on the heels of a barrage of tariffs on goods from the European Union, which consists largely of NATO countries.

Trade wars: Beyond the trade and defense contretemps with European allies and partners, the Trump administration has imposed hefty tariffs on an array of Chinese goods entering the U.S., prompting Beijing to retaliate with an equivalent round of duties. The extent and duration of this confrontation are hard to predict, but indications are it will broaden and persist while each side's stamina is tested. Wall Street seems unfazed, but soybean farmers and many manufacturers are more than worried.

Mueller wars: In Washington, more people are predicting some kind of major development before summer is over in special prosecutor Robert Mueller's probe of Russian interference in the 2016 election (see above). Former Trump campaign manager Paul Manafort is in jail awaiting trial, denied bail because he allegedly tried to contact and influence potential witnesses in his case (which includes charges of money laundering and foreign influence peddling). Meanwhile, Trump's lawyers are saying Mueller must meet various conditions before he can seek testimony from the president. 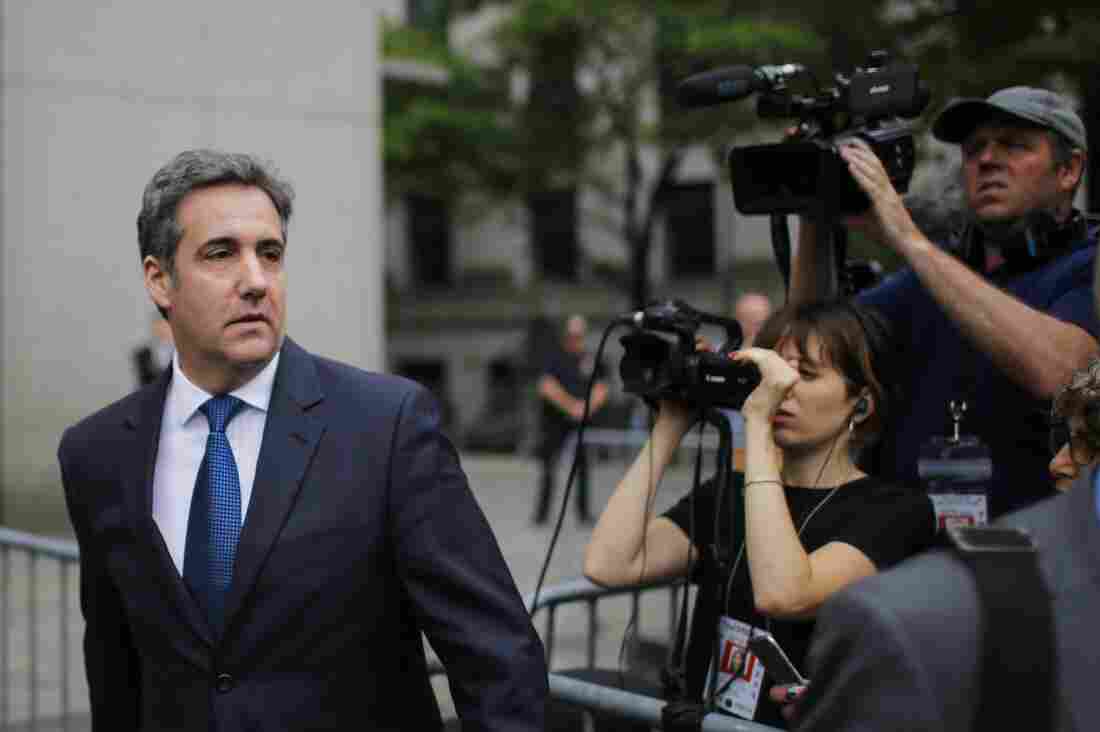 Cohen crackup: Back home in Manhattan, former Trump attorney and ally Michael Cohen is facing a battery of possible charges as court-appointed attorneys sift through voluminous records seized from his home and hotel. Cohen has hired new attorneys to replace those with whom he had a mutual defense arrangement with Trump. This is the latest in a series of signals that Cohen might cooperate with prosecutors if he is not given a pardon by the president. On Sunday, Trump attorney Rudy Giuliani told NBC's Meet the Press "it would be great" if Cohen cooperated with the government because there was nothing Cohen could tell that would be a problem — "so long as he tells the truth."

Pruitt exit: The contraction "Pruxit" never had a chance to catch on, but the most widely predicted departure yet from the Trump Cabinet finally happened on Thursday. Trump accepted the resignation of embattled EPA Administrator Scott Pruitt, saying the former attorney general of Oklahoma feared "becoming a distraction." Pruitt was already the subject of more than a dozen investigations into his official and personal business since coming to Washington early in 2017. A headline on Friday, the story was so long anticipated that it already seemed "old news."

Affordable Care Act payments: The Trump administration has decided to hold up the next round of "risk adjustment" payments to health insurers under the ACA. Even a temporary interruption in the billions of dollars involved will expose the insurers to big losses, meaning they are likely to charge higher premiums or cease offering the policies this fall. The administration says it is awaiting greater clarity from the courts, which have issued somewhat different rulings regarding the payments.

Congress returns: After their Independence Day recess, the House and Senate come back to find their competing farm bills and defense bills still unresolved. Fights with the president loom over his handling of trade, foreign relations in general and the funding for his wall on the Southern border.

In this sort of environment, potential stories that could have a wide audience in more typical times simply go by with relatively little reaction. So a Trump rally speech in Montana on Thursday that included remarkably aggressive attacks on various adversaries barely stayed in the public eye beyond the length of its live coverage on cable TV.

And a head-turning tale of U.S. officials objecting to a World Health Assembly proposal to boost the benefits of breastfeeding was likewise an also-ran for most news consumers. Ecuador had proposed the resolution backing the most traditional form of nursing babies, with new scientific support. But U.S. officials at the U.N.-affiliated conference threatened Ecuador with trade consequences if the resolution were to be approved.

One can only wonder how many other remarkable stories are out there, or will be out there, going unnoticed and unremarked upon in the welter of other news.