Accessibility links
Reuters Reporters To Face Trial In Myanmar After Covering Rohingya Massacre Despite international outrage, a Myanmar court has ruled that a case can proceed against Wa Lone and Kyaw Soe Oo, who were arrested while reporting on the killings of 10 Rohingya men last fall. 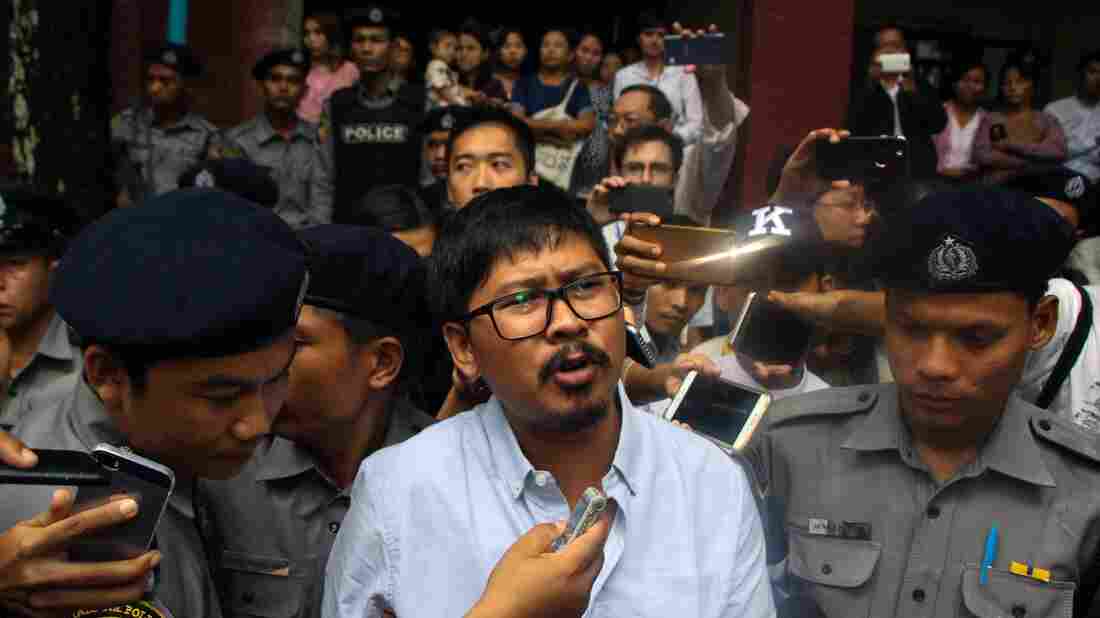 Wa Lone, 32, speaks to reporters as police escort him from the courthouse following his pretrial hearing Monday in Yongon. He is one of two Reuters reporters charged with breaking the country's secrecy law, which carries the possibility of 14 years in prison. Myo Kyaw Soe/AFP/Getty Images hide caption 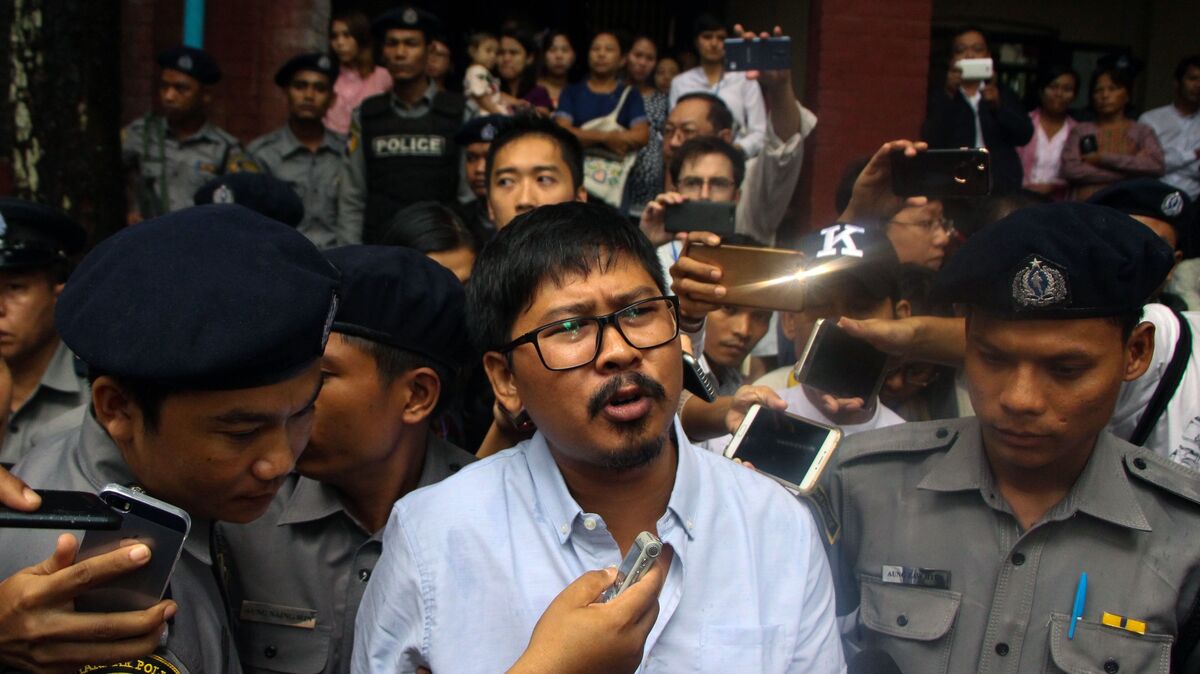 Wa Lone, 32, speaks to reporters as police escort him from the courthouse following his pretrial hearing Monday in Yongon. He is one of two Reuters reporters charged with breaking the country's secrecy law, which carries the possibility of 14 years in prison.

Half a year after Myanmar prosecutors announced they'd seek charges against two Reuters reporters for allegedly violating state secrets, a court in Yangon has ruled that the controversial case can proceed. The decision Monday means Wa Lone, 32, and Kyaw Soe Oo, 28, will stand trial.

The two journalists were in Myanmar reporting on a massacre of members of the country's Rohingya Muslim minority. The men pleaded not guilty to breaking the Official Secrets Act — a law rarely prosecuted since its institution in 1923, back when Myanmar was still known as Burma under British colonial rule. It carries a maximum penalty of 14 years in prison.

Observers beyond Myanmar's borders have widely condemned the case as a thinly veiled bid to stifle press freedom in the country, which has been riven by a bloody government crackdown on the Rohingya. Since last August, when a Rohingya insurgent group attacked several military outposts, the military's vast retaliation in Rakhine state has sent more than 700,000 members of the Muslim minority fleeing into Bangladesh.

The two Reuters journalists had been investigating allegations of one such atrocity, the Sept. 2 massacre of 10 Rohingya men, when they were arrested late last year. Prosecutors say the journalists illegally obtained confidential government documents in the course of their reporting. 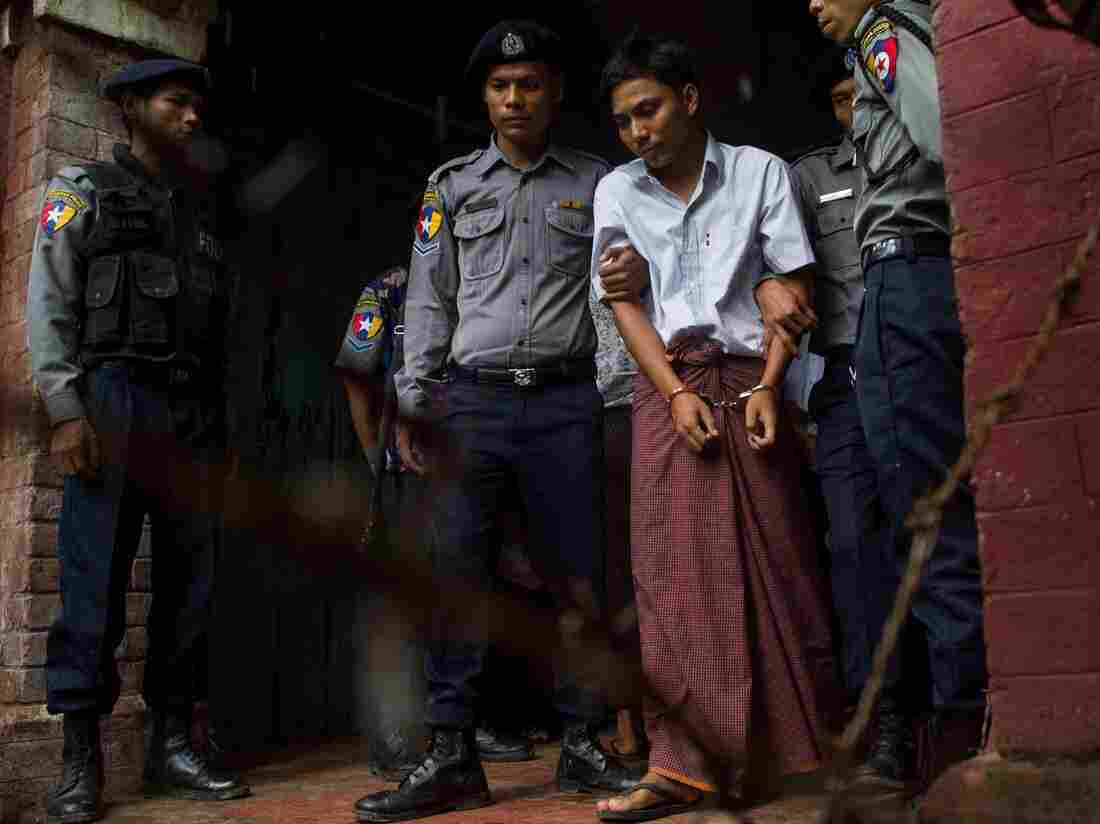 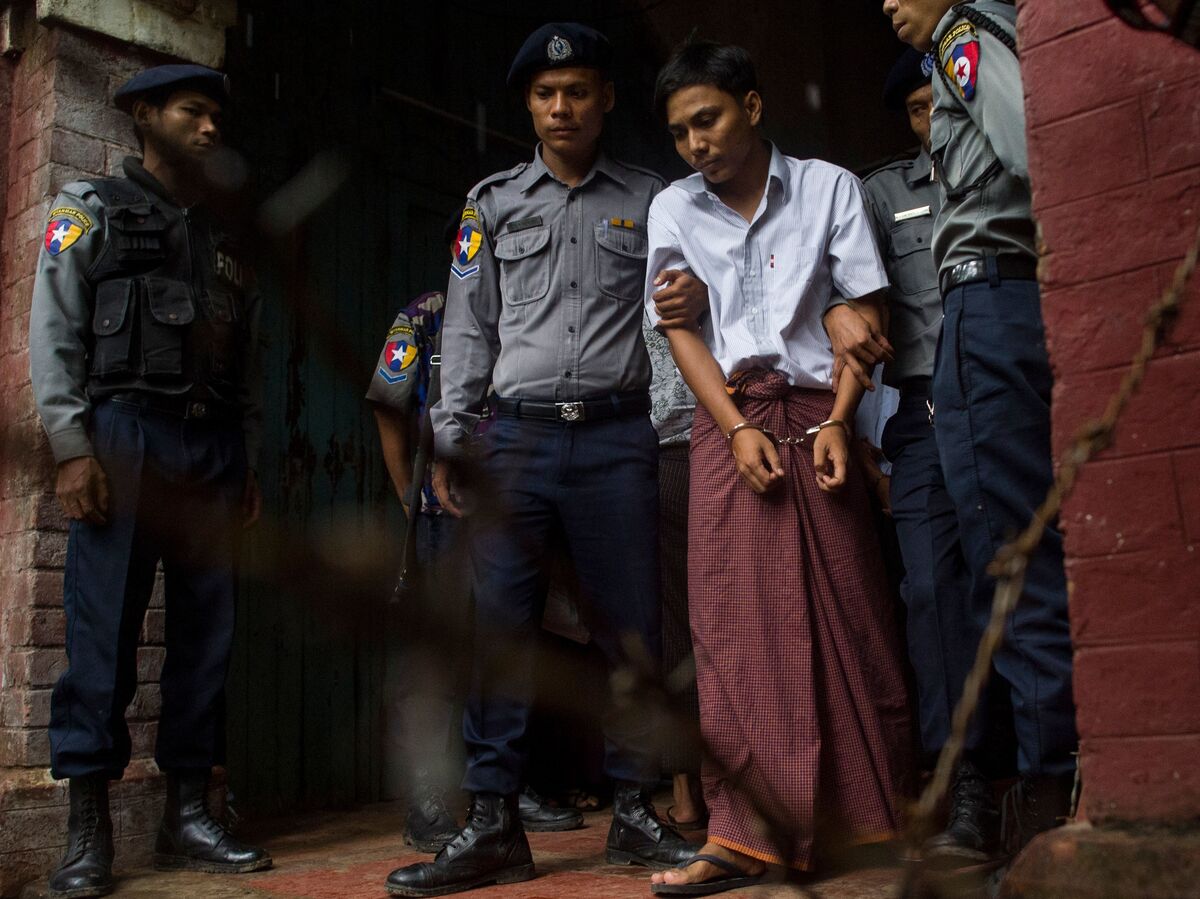 Kyaw Soe Oo, 28, leaves the Yangon courthouse in May, handcuffed and flanked by police officers.

Yet the arrest failed to quash their story, which Reuters eventually published as a special report in February. Unlike most stories on the crisis to date, theirs drew not on victim accounts, but primarily on interviews with local Buddhist villagers and Myanmar soldiers who claimed to have taken part in the killing and grave-digging.

Also in an unusual move, the Myanmar military issued a statement acknowledging that the killings took place — doing so the same day that Reuters published its story, complete with images of the 10 bloodied bodies piled into a single shallow grave immediately after their murder.

Among the brutal details in the Reuters report was an incident explained by Soe Chay, a retired soldier and local Buddhist villager who had been enlisted by security forces to dig the victims' grave.

"Do whatever you want to them," the soldiers told him, according to the reporters, and ordered one of the Rohingya captives to stand up. "I started hacking him with a sword," Soe Chay recalled, "and a soldier shot him when he fell down."

The journalists were in prison when their reporting finally saw the light of day. And there they have remained, behind bars, as international advocacy groups for free speech and journalism lauded their work with several awards — and leveled condemnations at the Myanmar government.

"These Reuters journalists were doing their jobs in an independent and impartial way, and there are no facts or evidence to suggest that they've done anything wrong or broken any law. They should be released and reunited with their families, friends, and colleagues," Reuters' president and editor in chief, Stephen Adler, said in a statement released Monday.

"Today's decision casts serious doubt on Myanmar's commitment to press freedom and the rule of law."

"This is a black day for press freedom in Myanmar," Tirana Hassan of Amnesty International said Monday. "The court's decision to proceed with this farcical, politically motivated case has deeply troubling and far-reaching implications for independent journalism in the country."

Myanmar's civilian leader, the Nobel Peace laureate Aung San Suu Kyi, has defended the case as being irrelevant to the journalists' coverage of "the Rakhine issue."

"They were arrested because they broke the Official Secrets Act," Suu Kyi told Japanese broadcaster NHK last month. The leader has come under heavy criticism for her silence as Myanmar's military carries out what has been widely described as ethnic cleansing against the Rohingya. "We cannot say now whether they were guilty or not. That will be up to judiciary."

The journalists' formal trial is set to begin next Monday, Reuters notes. And their lawyer says his clients are determined to maintain their optimism.

"Naturally, I'm not satisfied ... not happy," Khin Maung Zaw told reporters after Monday's decision, according to the wire service. "But I'm not losing hope. In the end we will have a happy ending."