Accessibility links
It's Summer, And It's Time For Some 'Pew-Pew-Pew' Research Can a person who once had an Atari 2600 learn to love games without characters made up of colored squares visible to the naked eye? This summer, we'll try to find out.

It's Summer, And It's Time For Some 'Pew-Pew-Pew' Research

It's Summer, And It's Time For Some 'Pew-Pew-Pew' Research 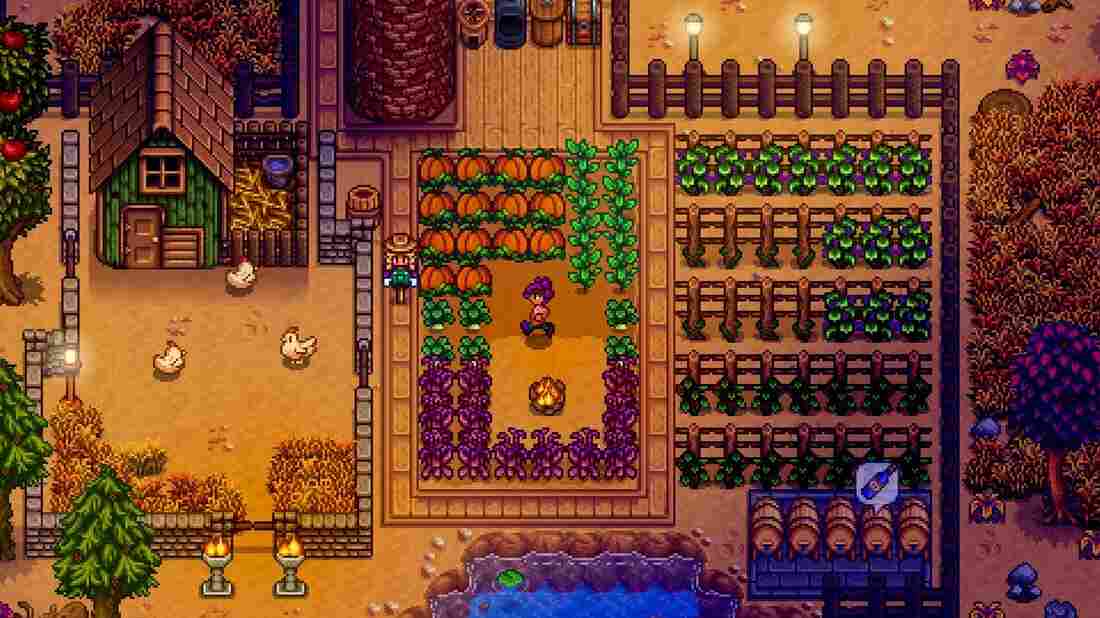 Stardew Valley is a game in which you create your own thriving farm. It's just one of the ones we'll be talking about this summer. ConcernedApe hide caption 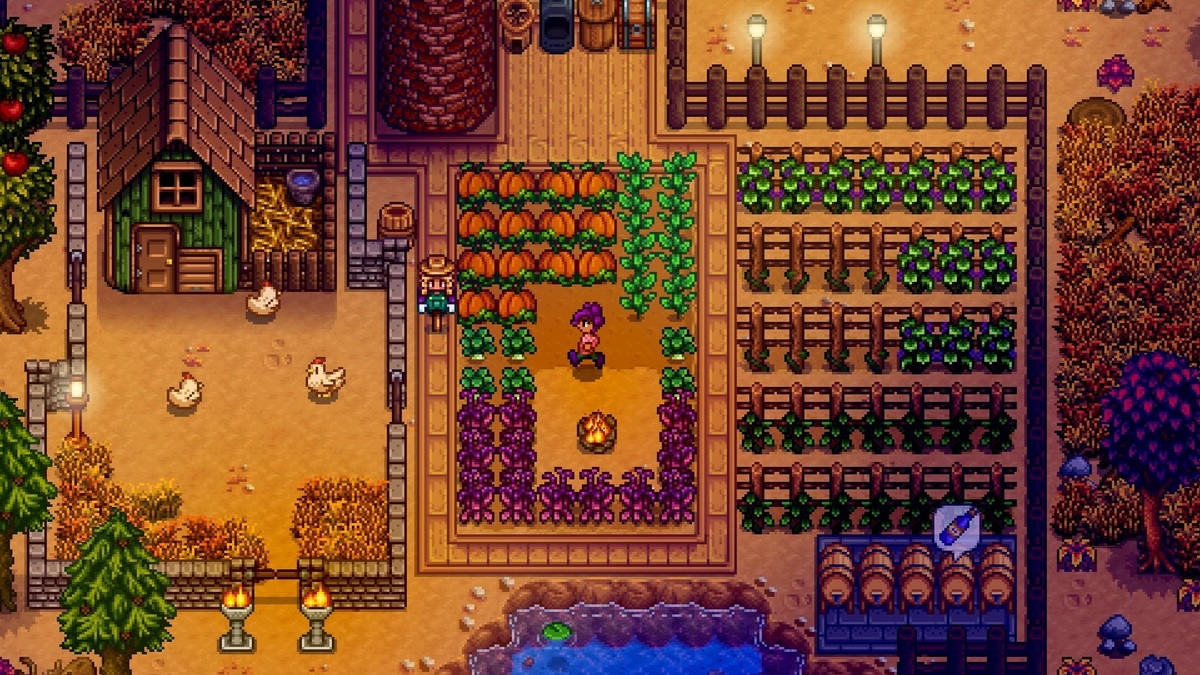 Stardew Valley is a game in which you create your own thriving farm. It's just one of the ones we'll be talking about this summer.

There's a good chance that I try to absorb too much stuff, culturally speaking. I try to keep up with TV, and movies, and at least some books, and I read other people's criticism, and then there's news, and also I now spend a lot of time looking at pictures of other people's dogs. (I have a reciprocity agreement with All Internet Dog People. They look at my dog walking a stick down the streets of D.C.; I look at their dogs sleeping or wearing clothes or looking balefully at the camera.)

But every year that passes, my passing relationship with games is more of a liability. Their centrality to culture increases; the conversation around their artistic aspect intensifies; the role they play in the lives of other people expands; my detachment from them makes me less and less of a pop culture generalist.

I've been here before. I got a PS3 in 2013, and I had a lovely time playing the sand-floating game Journey with a stranger. I had a Wii before that. And I played games when I was a kid — we had the Atari 2600 a lot of people had, back when the idea was new, back in the very very very distant past. I played Pitfall! and Space Invaders and Asteroids and Combat! I played a game that I thought I remembered as Video Olympics, but I hadn't thought about in about 35 years, so I checked to make sure it was real, and it is. I remember a boy who spoke mostly Spanish trying to make rather adorable conversation with me at camp when I was 13 by asking whether I had Atari or Intellivision.

In fact, sometime during the 1980s, the first computer we had at home was a TRS-80 my parents borrowed from work, and I played Frogger on it from, as I recall, a 5 1/4-inch floppy disk. Believe it or not, I played Leisure Suit Larry somewhere — someone's house, someone's computer, I don't remember. I played time-killers on my phone and my various PCs: Tetris and Minesweeper for a while, Bejeweled for a while, Angry Birds briefly. I played Sim City 3000, but I got very bored stamping power plants into the earth — I felt like Tom Hanks in Big, asking what's fun about playing with a building. I played The Sims, too, but I did not particularly want to make imaginary people use the bathroom, nor did I want them to be literally jumping up and down complaining. (If I wanted that experience, I'd just stay on the internet, amirite?)

And even in the last few years, whenever I would start a well-regarded game like Super Mario Galaxy, I would quickly get frustrated by my stuck points — the places where I couldn't figure out how to solve a problem that was difficult but not particularly interesting and that kept me from doing anything else until I'd solved it. I would get bored. I didn't want to spend an hour figuring out the exact speed at which I had to hit three buttons or whatever it might be; it was too much like punching in random codes until I lucked into the right one. I didn't want to bash my head into a wall over and over again — figuratively or literally — just hoping for a change in my luck. I didn't want to figure out by process of elimination — desperation, really — that a button did a thing there was no reason to believe it would do. I didn't want to get desperate in the first place. What's fun about that?

I took recommendations. I tried other highly regarded and/or very popular games: I played Brothers: A Tale Of Two Sons, but that was too sad. I played Grand Theft Auto, but I didn't want to shoot people or spend that much time driving around. I played a teamwork game with friends and made one of them so frustrated that he literally took a deep breath and dropped his head to look at the floor so that he wouldn't scream at me.

I felt like a bit of a Goldilocks, poking at games and thinking this one was too hard, this was too dark, this was too simple. Since I was doing this in my free time (which is also how I watch most of my TV and movies), it seemed like a lot of investment to hope I'd get something from it for work.

Oh, that's right: the investment. This brings us to the other problem. If you are a generalist, you can spend a few hundred dollars on a console and learn a year later that everyone thinks the one you bought is now irrelevant. (You will also learn the next day that half the world thinks you got the wrong one. Or that you should have all of them, which works as long as they assume your consoles are paid for by your job. There is only so much you can do.) Popular games often cost 60 bucks a pop now, meaning that to be a person who knows about Legend of Zelda: Breath of the Wild costs about four times as much as being a person who knows about a movie, and the same amount as casually watching everything on Netflix for a few months — and that's before you buy the initial gear.

I also come with two disadvantages that purely have to do with my personal taste. The first is that I will never want to hear strangers in my ears talking to each other or to me. When I recently opened the incredibly popular building/fighting game Fortnite, I immediately heard two young strangers close-talking into what seemed to be headset microphones almost up against their lips, and not since a mouse ran under my couch in my first Brooklyn apartment has a critter fled the way I fled that game. I hear you: "BUT YOU CAN TURN THE SOUND OFF!" Yes, of course you can. But they're still doing it. They're still there. Now they're just talking about me behind my back. Knowing that as I am learning and figuring out what I'm doing, other people are cackling and name-calling my dumb little avatar and I'm just sticking my fingers in my ears? No, thank you.

In any event, whether or not I could learn to live with this, I certainly don't like it. It's not a feature for me the way it is for a lot of people who love games right now. With Journey, I liked the fact that the only communication was saying "BING!" That's all I want from strangers most of the time when I'm relaxing: acknowledgment. If you put a giant virtual swimming pool in front of me with a sign that says that it offers a three-hour dip in everyone else's id and the price of admission is $60, I will not buy a ticket.

The other is that I will never want to play first-person shooters, except maybe in some highly cartoonish paintball or fruit-hurling scenarios. I don't judge people who do, but it's not my thing. Not relaxing, not pleasant, not fun or funny — not for me. I will watch violent shows that don't directly ask me to participate, even though they may not be to my taste. But I don't feel like I need to partake in simulated massacres so I can know what's going on. My brain does not need help being corroded at the moment.

Can you not care about playing with strangers (who will just talk to you, ugh) and not care about shooters and still be less distant from all this than I have been recently? Of course. And so, knowing what I know of myself, I chose a Nintendo Switch, which transitions easily between being a console game you play on your TV with controllers and a handheld game you ... well, you hold in your hands. And I bought some games.

So this summer, I'll spend some time writing about these new adventures. Super-popular games, hopefully some less popular ones, and even why I'm growing virtual parsnips. The whole thing has come a long way since Video Olympics, so let's jump in. And by all means, tweet me if you have recommendations. (Unless they are to go back in time and play Leisure Suit Larry. Not interested.)