Accessibility links
Kavanaugh Nomination Sparks Partisan Uproar On Abortion Rights A large number of Senate Democrats immediately announced that they plan to vote against him, largely on fears that he could tip the Supreme Court further against abortion rights. 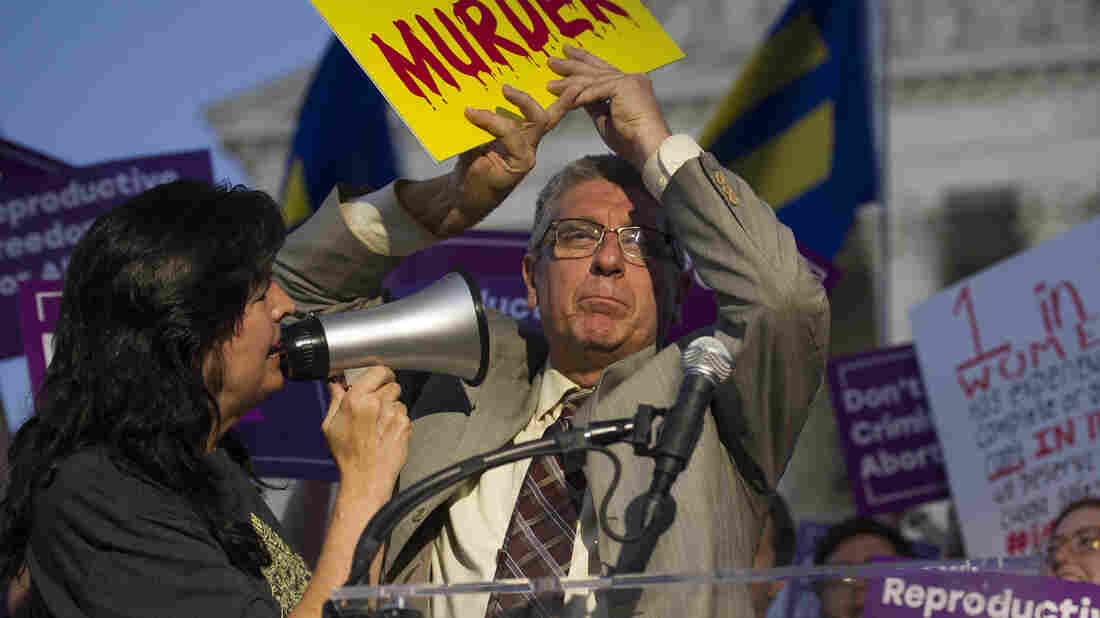 Operation Rescue founder Randall Terry is confronted by a supporter of abortion rights in front of the Supreme Court on Monday as President Trump announced his nomination or Brett Kavanaugh to the Supreme Court. Abortion will be a key issue in the confirmation process. Cliff Owen/AP hide caption 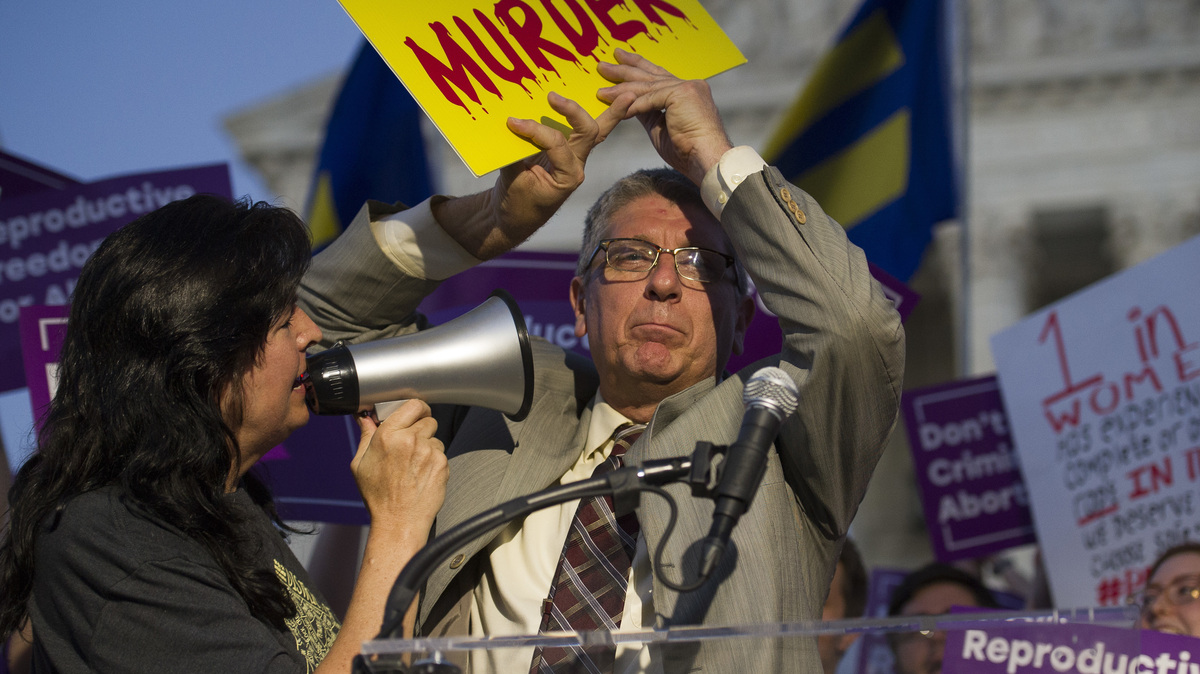 Operation Rescue founder Randall Terry is confronted by a supporter of abortion rights in front of the Supreme Court on Monday as President Trump announced his nomination or Brett Kavanaugh to the Supreme Court. Abortion will be a key issue in the confirmation process.

President Trump's nomination of Judge Brett Kavanaugh to fill the Supreme Court vacancy left by retiring Justice Anthony Kennedy was met with swift partisan response from many in Congress, emphasizing the power of a narrow group of uncommitted senators.

A large number of Senate Democrats, including Senate Minority Leader Chuck Schumer, D-N.Y., immediately announced that they plan to vote against Kavanaugh.

"I will oppose Judge Kavanaugh's nomination with everything I have, and I hope a bipartisan majority will do the same," Schumer said in a statement. "The stakes are simply too high for anything less."

Republicans called the choice a triumph and rallied behind Kavanaugh. Senate Majority Leader Mitch McConnell, R-Ky., called him a "superb choice" who is well-qualified for the job.

"Judge Kavanaugh has sterling academic credentials. He is widely admired for his intellect, experience and exemplary judicial temperament," he said. "This is an opportunity for senators to put partisanship aside and consider his legal qualifications with the fairness, respect and seriousness that a Supreme Court nomination ought to command."

But Schumer and other Democrats based their opposition in large part on fears that Kavanaugh would band together with the court's four conservative justices to restrict abortion rights and further undermine the Affordable Care Act. Those issues will be central to a heated fight among Democrats to persuade moderate Republicans and moderates in their own party to oppose Kavanaugh.

The pressure will be most intense on Sens. Heidi Heitkamp, D-N.D., Joe Manchin, D-W.Va., and Joe Donnelly, D-Ind., all of whom are running for re-election in states Trump won in 2016.

Trump polls highly among voters in those states, and the closely watched Democratic trio will be under tremendous pressure to back the president. All three have reputations for working with Republicans on some policy issues and appearing at events at the White House when their politics align with Trump. But a controversial Supreme Court pick could test the boundaries of their willingness to buck the rest of the Democratic Party.

All three released statements that focused on their willingness to fully vet the nominee.

"Part of my job as Senator includes thoroughly considering judicial nominations, including to the Supreme Court," Donnelly said in his statement. "I will take the same approach as I have previously for a Supreme Court vacancy."

"An exhaustive and fair process took place for Justice Gorsuch, who I supported," Heitkamp said. "It should and must take place again now."

Outside groups on both sides of the debate over abortion rights immediately issued predictions about what the nomination would mean for the future of Roe v. Wade.

Dana Singiser, the vice president for public policy and government relations at Planned Parenthood Federation of America, told reporters Monday night, "The right to access abortion safely and legally in this country is clearly on the line."

Anti-abortion-rights activists do not disagree. Marjorie Dannenfelser, the president of the conservative Susan B. Anthony List, told reporters on a press call that the nomination of a fifth conservative justice is the culmination of years of work getting Republicans elected to all branches of government.

"We have known this moment was coming, and so over a year we have been organizing in these Senate battleground states," she said, "knowing that these senators would be key to a confirmation battle."

That confirmation process is set to begin immediately on Tuesday, when Kavanaugh is expected to come to Capitol Hill to begin meetings with senators.

He will be accompanied by former Sen. Jon Kyl of Arizona, who will be helping the nominee through the arduous confirmation process. Kyl is well-liked in the Senate and was personally recommended by McConnell as a good choice for the job.

He is a former member of the Senate Judiciary Committee, where he participated in the confirmation of four justices.

Kyl's job, known as the "Sherpa," is to usher the nominee to one-on-one meetings with senators and to help him prepare for the types of questions he may face. Kyl may also be asked to sit in on the meetings or help guide the conversations behind closed doors.

Those meetings are an opportunity for senators to ask questions of the potential justice in a private setting before public hearings begin. Once that is done and Kavanaugh has completed a questionnaire from the Judiciary Committee, formal hearings can begin.

Committee members will question Kavanaugh over the course of several days of hearings. Sen. John Kennedy, R-La., a member of the Judiciary Committee, said Monday that he hopes to use that time to learn more about Kavanaugh's legal mind.

"I'm not looking for an ideologue," Kennedy said. "I'm looking for someone who has a sound, well thought out judicial philosophy."

Republican aides said Monday that they expect the whole process could take about two months. The last two Supreme Court nominees — Justices Elena Kagan and Neil Gorsuch — were approved after about 66 days.