Accessibility links
Daring New Novel Fetishizes A Desperate Desire For Sleep Ottessa Moshfegh's My Year of Rest and Relaxation centers on a miserable young woman who believes that if she could only sleep long enough, she'd wake up refreshed and free of existential pain. 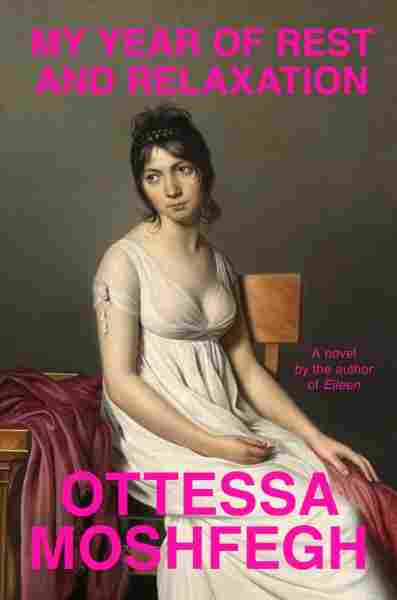 My Year of Rest and Relaxation

Title
My Year of Rest and Relaxation
Author
Ottessa Moshfegh

Over the years I've called many a novel a snoozer, but this is the first time I'm using that term in tribute. Ottessa Moshfegh's new novel, My Year of Rest and Relaxation is a real snoozer, a daring and accomplished tale about a miserable young woman who believes that if she could only sleep long enough, she'd wake up different — refreshed and free of her existential pain.

Whatever you may think of her novel's subject — and I'm still on the fence — you have to give Moshfegh props for her skill as a writer. Sleep, that activity we spend a third of our lives doing, may be the least chronicled subject in all of fiction and art. Andy Warhol gave it a try with his cult film called Sleep, which was five hours and 20 minutes of footage of his lover at the time sleeping. The story goes that nine people attended the premiere in 1964 and two walked out during the first hour. The others probably dozed off.

Unlike Warhol, Moshfegh isn't just observing her sleeping subject; instead, Moshfegh wants to fully enter her unnamed narrator's strange frame of mind so that her quest for shut-eye is compelling. Our narrator is a recent Columbia grad whose parents are dead. Thanks to her inheritance, she lives alone in an upscale East Side apartment. Here's how our narrator introduces herself:

Whenever I woke up, night or day, I'd shuffle through the bright marble foyer of my building and go up the block and around the corner where there was a bodega that never closed. I'd get two large coffees with cream and six sugars each, chug the first, ... then sip the second one slowly while I watched movies and ate animal crackers and took trazodone and Ambien and Nembutal until I fell asleep again. I lost track of time in this way. Days passed. Weeks. A few months went by. ... I'd wake up to find voice messages on my cell phone from salons or spas confirming appointments I'd booked in my sleep. I always called back to cancel, which I hated doing because I hated talking to people.

In a flashback we learn that, until she was fired for falling asleep on the job, our narrator worked as a receptionist at an art gallery in Chelsea — one of those places that sells so-called "subversive" art. In one of the many wry moments in this novel, our narrator describes an exhibit at the gallery called Cling Film, featuring objects — like a Big Mac and fries, used panty liners and baby teeth — all encased in Saran wrap.

Something else we learn is that our narrator is beautiful — comparisons are made to the young Lauren Bacall and Faye Dunaway. Indeed, a subplot of My Year of Rest and Relaxation involves the passive force of beauty. For instance, even though our hibernating narrator shuns contact, a college friend named Reva keeps showing up at her apartment. Here's our narrator's take on their relationship:

[Reva's] envy was very self-righteous. Compared to me, [she said] she was "underprivileged" . ... I looked like a model, had money I hadn't earned, wore real designer clothing . ... Reva. . . came from Long Island, was an 8 out of 10 but called herself "a New York three". ... She worshipped me, but she also hated me. ... I had chosen my solitude and purposelessness, and Reva had, despite her hard work, simply failed to get what she wanted. ... So when I started sleeping all the time, I think Reva took some satisfaction in watching me crumble into the ineffectual slob she hoped I was becoming.

The narrative suspense of My Year of Rest and Relaxation derives from tracking our Sleeping Beauty's efforts to cure herself of desolation by just sleeping it off with the help of meds supplied to her by a quack psychiatrist. In a bizarre climax, our narrator encases herself in her apartment and embarks on a six month marathon slumber — interrupted only by sporadic trips to the fridge and more sleeping pills. Asleep in her cocoon she's like one of those Cling Film objects from the art gallery.

As engrossing as it is, there's also something undeniably airless and off-putting about this novel. Reading it is like having one of those weird vivid dreams; a dream that's so self-contained, once you shake off its drowsy spell, you may find it hard to remember what it was all about.