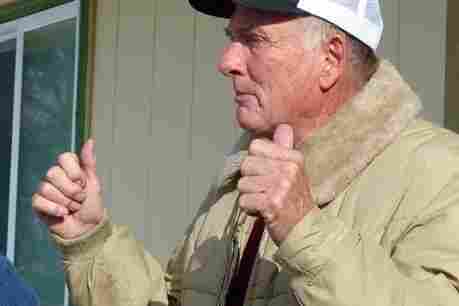 In its statement announcing the pardon, the White House said, "The Hammonds are devoted family men, respected contributors to their local community, and have widespread support from their neighbors, local law enforcement, and farmers and ranchers across the West."

As for when the pair might be freed from federal prison, that event seems imminent: Larry Matasar, a Portland, Ore., attorney who represents the Hammonds, tells NPR that he spoke to the Office of the Pardon Attorney about sending the proper paperwork to the prison. A representative of that office within the Justice Department said he's "expecting the Hammonds to get out today," Matasar said.

The Hammonds were convicted in 2012 of setting fires that spread on government-managed land near their ranch. The elder Hammond was initially sentenced to three months in prison, while his son was ordered to a year and one day behind bars. But those sentences fell short of five-year minimums for arson committed against federal property. Prosecutors appealed, and the Hammonds were ordered to serve the full five-year terms.

In its statement Tuesday, the White House called the appeal "overzealous" and the resulting sentence "unjust."

Saying that he and other attorneys involved in the case will try to expedite the Hammonds' return to society, Matasar stated, "I am very happy for the entire Hammond family, who I have known and respected for 25 years. I hope that Dwight and Steven will soon be able to continue their work on the Hammond Ranch."

Protesters who rallied to support the Hammonds included Ammon Bundy, who was part of the self-styled militia that broke into the Malheur National Wildlife Refuge in 2016, beginning a 41-day standoff with the U.S. government over how it handles rangelands throughout the Western states.

The pardons come as some federal employees in the rural West are wary of what they say is a high likelihood that more standoffs could develop, NPR's Kirk Siegler reports, citing soil scientists, cattle range managers, and the people who staff recreation sites.

"It's also not clear yet if other ranchers who graze their cattle on public lands might decide to openly defy federal laws, [with] the Hammonds being pardoned," Kirk says.

The pardons were welcomed by the Oregon Farm Bureau, which describes itself as "a grassroots, nonprofit, nonpartisan organization."

The OFB, which has advocated on the Hammonds' behalf, said on Tuesday that their punishment was a case of "prosecutorial overreach and bureaucratic vendetta."

Rep. Greg Walden, R-Ore., said, "I applaud President Trump for thoroughly reviewing the facts of this case, rightly determining the Hammonds were treated unfairly, and taking action to correct this injustice."

Walden added that the Hammonds were "serving a mandatory minimum sentence that was established for terrorists" – referring to the Antiterrorism and Effective Death Penalty Act of 1996, which increased the penalties for using explosive or arson against federal property.

The law was enacted after the one-year anniversary of the Oklahoma City bombing in 1995.

"The seeds of the current situation were sown in 2001 and 2006. In both those years, the U.S. government said the Hammonds set fires that spread onto land managed by the [Bureau of Land Management]. The 2001 blaze burned 139 acres of public land, according to court documents; the 2006 fire — for which only Steven was convicted — burned an additional acre of public land."

Here's how the Justice Department described Steven Hammond's actions, in a statement after he was resentenced:

"Witnesses at trial, including a relative of the Hammonds, testified the arson occurred shortly after Steven Hammond and his hunting party illegally slaughtered several deer on BLM property. Jurors were told that Steven Hammond handed out 'Strike Anywhere' matches with instructions that they be lit and dropped on the ground because they were going to 'light up the whole country on fire.' One witness testified that he barely escaped the eight to ten foot high flames caused by the arson."