Accessibility links
NFL Players Union Files Grievance Over League's New National Anthem Policy The league aimed to end controversy by requiring players on the field to stand for the anthem. But the players association says the rule "infringes on player rights." 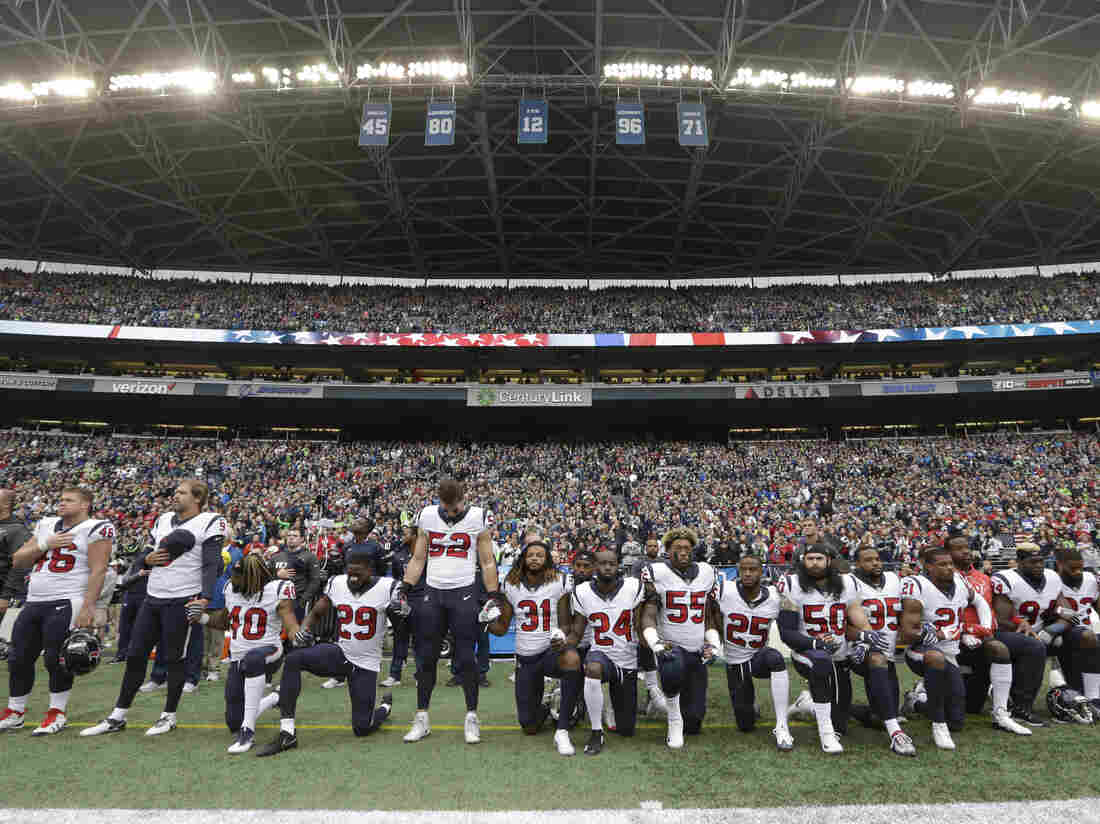 Houston Texans observe the national anthem before a game against the Seattle Seahawks last October, with some players kneeling in protest while others stand. Elaine Thompson/AP hide caption 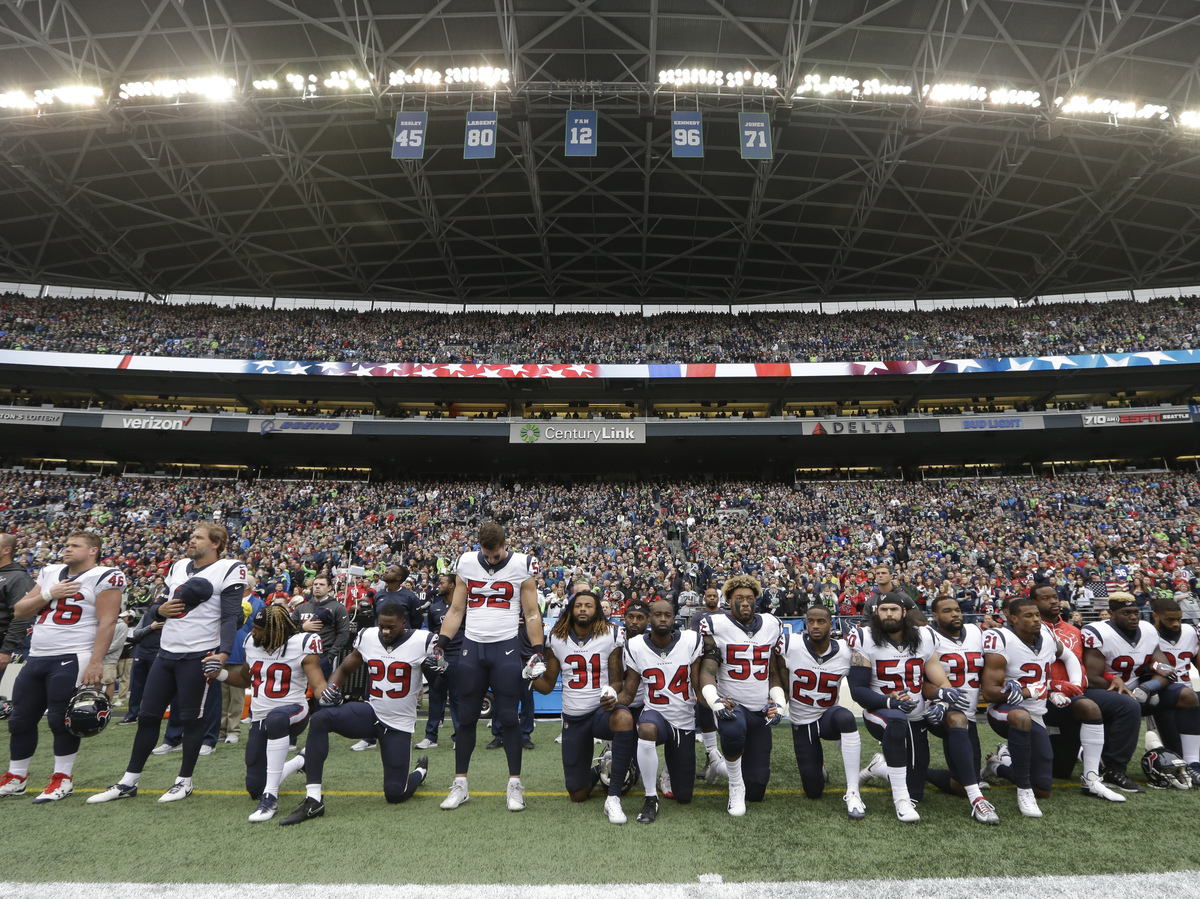 Houston Texans observe the national anthem before a game against the Seattle Seahawks last October, with some players kneeling in protest while others stand.

The NFL had intended for its rule to achieve a resolution.

For more than a year, controversy had eddied endlessly around players' decisions to kneel during the national anthem. And the league thought a policy requiring players to stand for the anthem if they were on the field — but also allowing them to stay off the field and out of sight — would end an uncomfortable conversation that had reached even the White House.

But if it was resolution the league was seeking, the move failed.

The NFL Players Association announced Tuesday that it has filed a grievance against the league "on behalf of all players."

"The union's claim is that this new policy, imposed by the NFL's governing body without consultation with the NFLPA, is inconsistent with the collective bargaining agreement and infringes on player rights," the group explained in a statement.

Virtually from the moment the new rule was rolled out in May, the NFLPA has made its displeasure clear, saying NFL Commissioner Roger Goodell and team owners failed to consult players and contradicted assurances they had offered the union.

"NFL players have shown their patriotism through their social activism, their community service, in support of our military and law enforcement and yes, through their protests to raise awareness about the issues they care about," the NFLPA said at the time.

Many players publicly criticized the rule as a backslide for a league leadership with whom they had recently found common ground. Just one day earlier the Players Coalition, a group of activist-minded current and former NFL athletes, had inked a partnership with the league putting tens of millions of dollars toward initiatives grappling with social issues.

But in instituting the new rule, the NFL owners sought to "thwart the players' constitutional rights to express themselves and use our platform to draw attention to social injustices like racial inequality in our country," said Malcolm Jenkins, co-founder of the Players Coalition and All-Pro safety for the Philadelphia Eagles. "Everyone loses when voices are stifled."

Less than two weeks later President Trump disinvited Jenkins' Super Bowl-winning Eagles from a victory celebration at the White House. The president was clear about why he was rescinding his invite to the champions, many of whom had already said they did not want to attend.

And Trump made known on Twitter that he was not satisfied either with the NFL's solution to a controversy he and his vice president have followed closely — albeit for a different reason: "Staying in the Locker Room for the playing of our National Anthem is as disrespectful to our country as kneeling," he tweeted in rescinding the invitation one day before the delegation was to arrive. "Sorry!"

The NFLPA's move Tuesday is not the first grievance filed by players or on their behalf regarding the league's reaction to the anthem protests.

Colin Kaepernick, the former 49ers quarterback who began the action, filed allegations that team owners have colluded to keep him out of the NFL, and the union filed a similar claim on behalf of his ex-teammate Eric Reid, who has also struggled to find a job since becoming closely associated with the protest.

Now the union is following through on its promise in May to "challenge any aspect of [the new rule] that is inconsistent with the collective bargaining agreement." Though the group did not clarify which particular aspects it was challenging.

At any rate, NFLPA leaders have expressed optimism they will be able to work together with the league to achieve what Goodell and Co. said they had intended in the first place: that elusive resolution. And they will be enlisting an independent arbitrator to help.

George Atallah, the union's assistant executive director of external affairs, said Tuesday he was glad that both players and management "will sit down and work on a solution, together."