Accessibility links
Why 'Seven Nation Army' Is The One Jock Jam To Rule Them All From the Queen of England to the hounds of hell, just about anyone can sing its hypnotic riff. Here's why The White Stripes' "Seven Nation Army" is the world's biggest sports anthem. 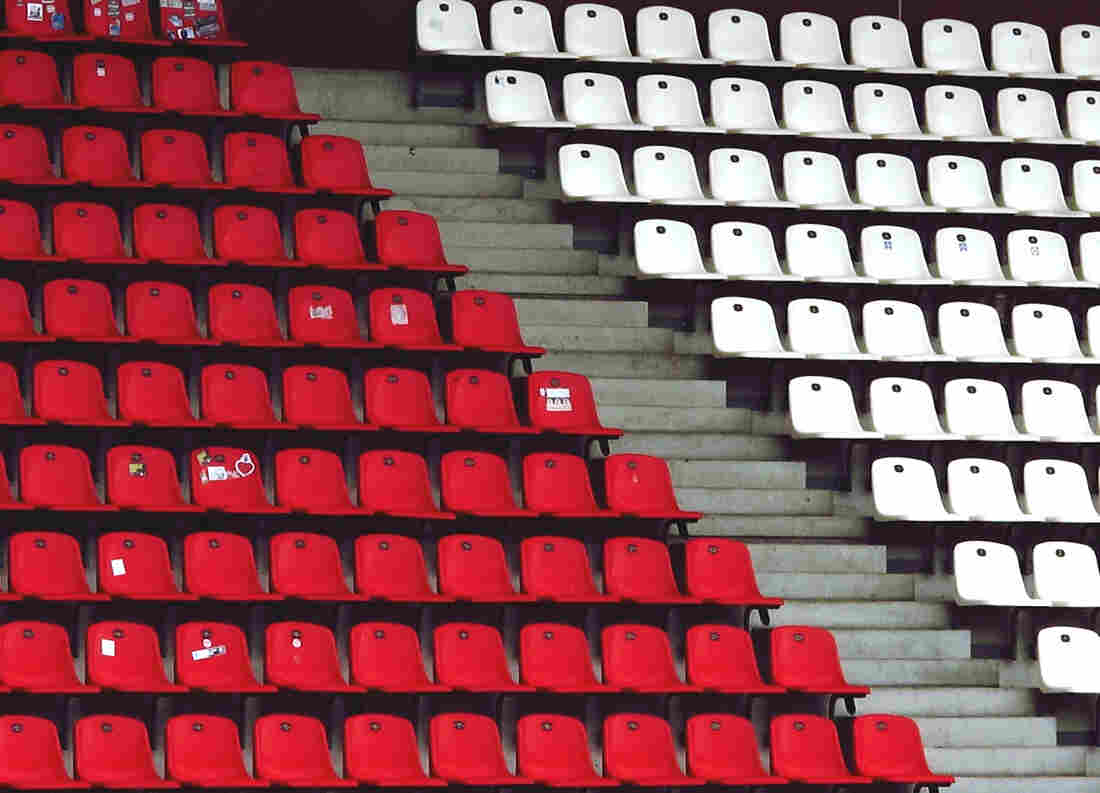 The White Stripes officially broke up in 2011, but the band's presence is still felt in sports stadiums around the world thanks to the song "Seven Nation Army." Jessica Bindernagel/EyeEm/Getty Images hide caption 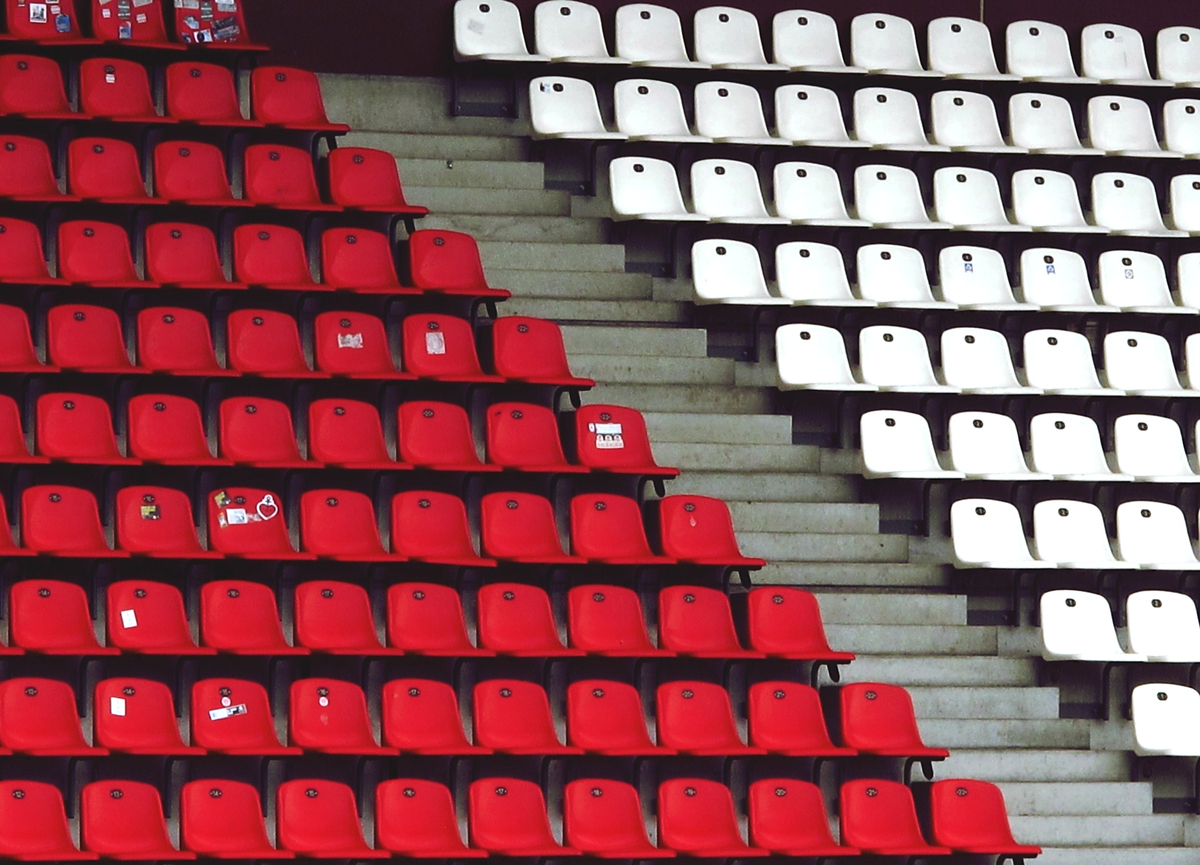 The White Stripes officially broke up in 2011, but the band's presence is still felt in sports stadiums around the world thanks to the song "Seven Nation Army."

This summer, the world's biggest sporting event has an American soundtrack. At every match of the 2018 FIFA World Cup in Russia, players have walked onto the field to the opening strains of "Seven Nation Army," the song first released in 2003 by The White Stripes.

More than 2 million people have heard it blaring over PA systems in stadiums across Russia. So have hundreds of millions of television viewers around the world. That arguably makes it the world's most popular sports anthem — which isn't bad for a song from a country whose men's national team failed to qualify for the quadrennial world championship this year.

"It's simple, catchy and aggressive, so it's perfect for a sports anthem," says Alan Siegel, a Washington, D.C.-based journalist who reported on how "Seven Nation Army" found a home in stadiums around the world for the sports website Deadspin.

Siegel says that the first thing you'll notice hearing the song at a sporting event is that instead of Jack White's impassioned vocal line, fans sing the song's central guitar riff. "It's just, 'Ohh, oh-OH-oh-oh ohhhh, ohhh,' and that's it, just over and over and over. It just gets hypnotic."

It's a simple musical phrase: just five different pitches, spread out over less than an octave. "And with the exception of the second note, the notes are all in sequence in the scale — like consecutive steps on a ladder," explains Nate Sloan, co-host of the podcast Switched On Pop. "It's very egalitarian, the kind of riff that's the first thing you figure out when you're learning how to play guitar."

The minor key gives it an intimidating ring. "Those last two notes — from the flat six to the five — have a lot of weight in musical history. You hear them a lot in laments, which form a genre going back to the baroque," Sloan says. The rhythm compounds that feeling: "By holding on to that first note, it generates a feeling of suspense. Then you get the almost machine-gun rapid fire of the next four notes, and they're syncopated, on the off-beats. ... That gives the riff an urgency that makes it much more memorable."

It's a folk melody. The riff has been deracinated and transformed into this instantly translatable chant.

"Seven Nation Army" didn't catch on right away: The song only made it to No. 76 on the Billboard Hot 100 after its release in March 2003 (though it did top the Alternative Songs chart). Its life as a sports anthem began six months later, when fans of the Belgian soccer team Club Brugge KV traveled to Italy for a UEFA Champions League match against one of the giants of European football, A.C. Milan.

"Some supporter groups were having some drinks before the match, and 'Seven Nation Army' was playing," Siegel says. "And then Brugge, which is not a traditional power, ended up upsetting Milan." The Belgians sang the riff as their team eked out a 1-0 victory, then brought it home as an unofficial club anthem.

Three years later, Club Brugge played host to another Italian team, A.S. Roma, and the tables turned the other way: The Romans headed home with a 2-1 victory — and a brand-new stadium anthem that they'd learned from the Belgians. That summer, Italian fans made the "Seven Nation Army" riff their own in the run-up to the 2006 World Cup, where they would score again.

"At that point, it sort of becomes the anthem of the Italian national team — and Italy wins the World Cup," Siegel says. "So it just takes off there."

Within a year, the song had made its way from European soccer to American football, starting with fans of Penn State's Nittany Lions. (Siegel says it was introduced by an executive in the school's athletic department who had heard fans singing it during Italy's championship run.) From there, other universities picked it up. NFL fans started singing it. NBA and NHL teams blared the recording during games. And music publishers sold thousands of arrangements for marching bands.

Within a few years, the song had entered the pantheon of stadium jams, alongside Metallica's "Enter Sandman" and Survivor's "Eye of the Tiger." But Sloan says "Seven Nation Army" has something that those anthems lack: singability.

"It's a folk melody," he says. "The riff has been deracinated and transformed into this instantly translatable chant."

Today, many soccer fans use the "Seven Nation Army" chant to sing the praises of players — especially those with five-syllable names, which notch neatly into the riff's last five notes. "We'll do it with Maxi Moralez, our No. 10, " says Neil Govoni, a supporter of the Major League Soccer team New York City FC. "And when [Italian player] Andrea Pirlo was here, that was also used for him. That cadence works a lot with many different players."

Professional soccer players disagree on whether chants make a difference down on the pitch. NYC FC defender Sebastien Ibeagha says he is too busy to listen when he's playing: "Half the time I don't really hear them," he says. "I can't say I've heard one yet that I've really picked up on. Sometimes I don't even know what they're saying, 'cause they're just so loud."

But two-time Olympic gold medalist and World Cup champion goalkeeper Briana Scurry says fan chants make a big difference to professionals."A lot of players might say professionally, 'Oh, we don't hear it,' " Scurry says. "But we do. We're human. It's a big energy boost. To have your home fans chanting together — it's very powerful and a moving experience."

Part of that power comes from hearing so many fans chant together in unison — an experience Sloan likens to being "a tuning fork in a sea of tuning forks."

How 'The Battle Hymn Of The Republic' Became Everybody's Anthem

"This is how people sang for a long time, especially before the advent of notation when music was strictly an oral tradition," he says. "Technology has eroded that in many ways, because so much music is now recorded. The moments today that allow us to access that more ritual and more social role of music are rare — like when we're singing 'Happy Birthday' or 'Auld Lang Syne.'

"At a moment when music education and arts education is at such a crisis point, I find any moment of public group singing is exciting," he adds. "It might get people interested in music who might not otherwise be — like, 'Maybe I'll join the choir!' "

Govoni agrees in principle, but he's over "Seven Nation Army" as a chant — especially after all the exposure at this summer's World Cup. Fan culture, he says, is a living thing that's always changing: "There are some songs that we sang in the first season that aren't really sung as much anymore, because we come up with new ones gradually."

As far as sporting events worldwide, however, Siegel says The White Stripes' riff hasn't worn out its welcome just yet.

"To be honest, I started to get tired of hearing it," he says. "But at every major soccer tournament, you start hearing it again. It's got a life of its own. It ebbs and flows, but you're gonna hear it."