Accessibility links
Caught In The Extended Stay Motel Trap Branson, Mo., welcomes more than eight million tourists each year, but the economic boom has passed by many of its low-wage workers who struggle to find safe and affordable housing.

This summer, millions of vacationers are expected to visit Branson, Mo., to see acts like singer Tony Orlando or the Oak Ridge Boys. It's boom time for the tourist destination, but for many of the workers who keep the good times rolling, a severe shortage of affordable housing forces them into rundown extended stay motels.

The main strip of Branson, in southern Missouri, is lined with miles and miles of all the miniature golf, bumper cars, fudge shops, custard stands and music theaters that a vacationing family could wish for.

Branson became internationally famous in the '90s for nightly shows by performers such as singer Andy Williams and comedian Yakov Smirnoff. The town of 11,000 people was hit hard during the recession, but it's bounced back and now welcomes more than 8 million tourists each year.

Shannon Cronin works as a waitress in a Branson restaurant and says she loves being part of the action.

"I love to hear where people are coming from," Cronin says. "You get to know someone even with five minutes of talking. Where are you from? Why are you here? You kind of get to escape."

Escape from a hand-to-mouth existence where workers like Cronin barely scrape by. At the end of the day, she returns to a musty extended stay motel where she and her three children and pets live. Their one room has a single king-size bed where the family sleeps together. She does laundry in the bathtub. For a kitchen, they have a mini-fridge and a microwave. Outside, drug dealers and prostitutes stalk the parking lot. Cronin says raising her kids in seedy motels like this for the last six years has changed the way she thinks about parenting.

The extended stay motel trap that many Branson families fall into starts with the promise of a better life, according to Carla Perry, who also spent years in them herself.

"It's like the commercials you see. 'Come on down,' you know?" Perry says. "Family friendly, kid friendly. Nice, clean. No crime. No drugs. Beautiful town. And it is in the commercials."

In the summer, when the vast majority of tourists visit, businesses can't find enough workers to fill all the seasonal low-wage positions. But because almost any apartment or house is rented for top dollar by tourists, there's little low-cost housing for workers.

Once the seasonal jobs dry up in the winter, so do paychecks. Unemployment rises to three or four times the state average. So workers like Perry have to stay in motels that run about $500 a month.

"You get stuck in like this big whirlwind that's going down the toilet. And it's just sucking you down," Perry says.

One rainy evening, volunteers with the nonprofit group Jesus Was Homeless knock on motel doors to hand out free sack lunches. Since the group was started 10 years ago, average hospitality wages have barely budged from $10 an hour.

Now that tourism has swelled to more than eight million people a year, worker advocates say the city should provide low-income housing and employers should increase wages.

At one extended stay, volunteers for Jesus Was Homeless give free sack lunches to residents. They also offer people in the motels help with things like housing, job training and health care.

Ashley Harkness, the director of operations, says the group prides itself on welcoming people in crisis.

"We've had them come in high. Prostitutes. I mean, drunk, literally on a Sunday morning," Harkness says.

Jesus Was Homeless was founded 10 years ago, and organizers say the demand has grown.

"I think wages are important," Harkness says. "I think the way employers treat employees is important." 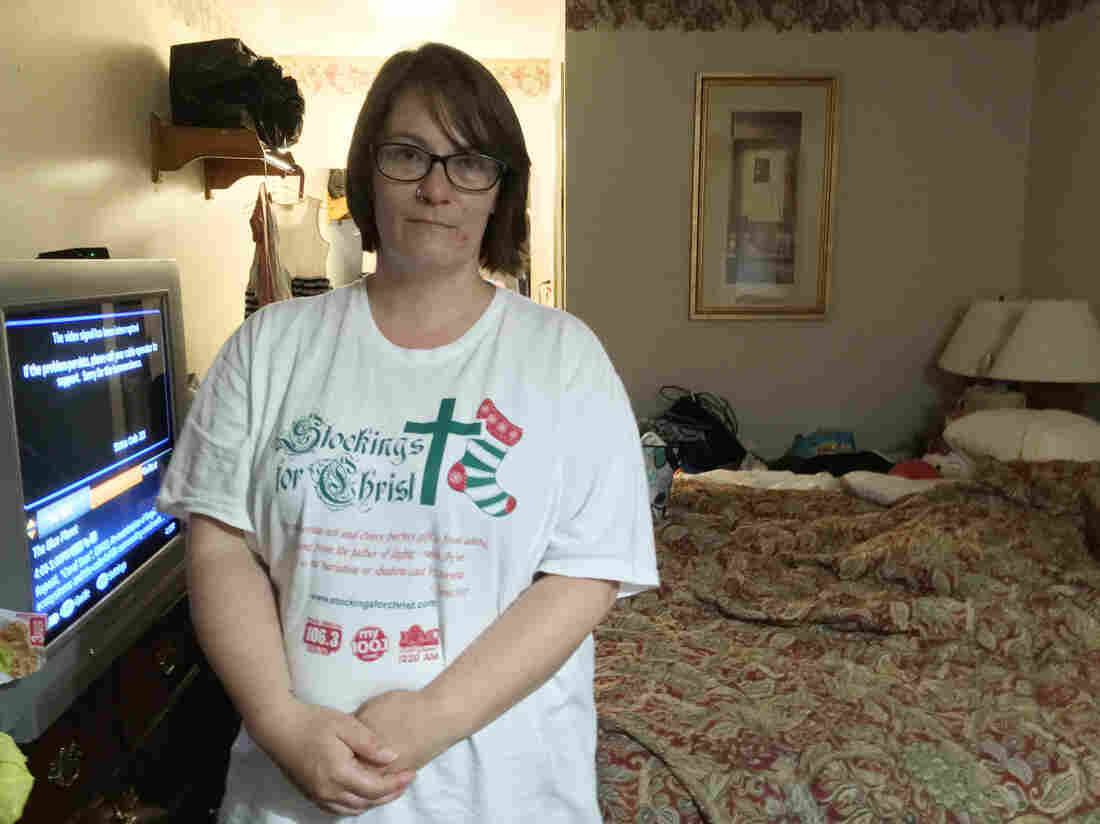 Shannon Cronin and her three children have lived at extended stay motels in Branson for the last six years. Alex Smith/KCUR hide caption

But there's little incentive for that in a town that appears to bend over backwards to accommodate businesses.

"Employees have to understand the employer is running a business, and they're trying to keep the doors open," says Stan Dobbins, Branson's city administrator.

Dobbins thinks one solution to Branson's poverty is to attract new industry, but that remains a struggle. He acknowledges the motels are a problem that's gone on too long, and the city has recently been changing its approach to dealing with them.

But when it comes to paying more, he says employers are in a tough spot because tourism is a fickle business, and that makes it hard for them to promise higher wages.

"Our theaters and our attractions and our businesses want to do the best they can by their employees," Dobbins says.

Branson is working to become a year-round destination, which would lead to more stable, and permanent, jobs.

Why Affordable Housing Could Become Harder To Find

Carla Perry, who spent years living in motels, now works for Jesus Was Homeless to help others, like Shannon Cronin, get out.

Perry says that for even the most motivated people, however, the stain of motel life can be hard to wash away.

"When you do go to get a job or do something different, you're tattered. You're broken," Perry says. "And the smell of poverty is very relevant around here. And so it's really hard for people to see past the outer shell to just see that person needs a chance."

With Perry's help, Cronin and her kids are leaving the motel. They got a government housing voucher and found an apartment to rent for the next two years.

Cronin is thrilled to be moving out and welcomes worrying less about her children's environment.

"We used to go on treasure walks, where we would find a heart-shaped rock, bring it home, you know, whatever was our adventure that day," she says. "When your son picks up a needle out of the rocks, that changes quickly. Then you start talking to them about not being able to pick up anything. You get scared about whether they should even...be in your hands for fear of what they could find or see."

Over the last few years, Cronin and her family have dealt with hunger, shelter and safety issues, but she says she's never let her children go without the most important resource of all.

"If I have a little hope, I'm for sure going to share it with them," Shannon says. "They're resilient. They're bright, and they're happy. But they need to hold on to that."