Accessibility links
Floating Prison Drones Equal Menace In 'The Furnace' Prentis Rollins' new graphic novel is set in a near future where the government uses drone-powered mobile invisibility fields to control its prisoners, keeping them out of sight and incommunicado. 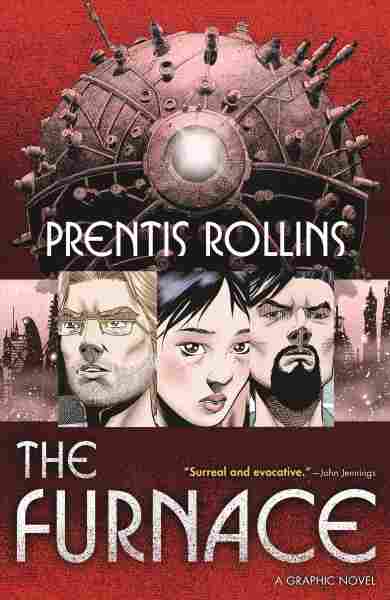 When we think about prison, we tend to think about vision. For centuries the ultimate prison design has been Jeremy Bentham's Panopticon, which allows a single guard to monitor numerous prisoners without them knowing exactly when they're being watched. In modern times, the theme of vision governs prison policy outside the walls, too. Americans don't want to see what goes on in our prisons, so we put them far away — sometimes even in other countries' hinterlands, where their very existence is kept secret. But we get curious, so we generate floods of fictional and documentary entertainment promising uncensored glimpses through the bars.

All these paradoxes fuel Prentis Rollins' sci-fi graphic novel The Furnace. Rollins imagines a future where society simultaneously expunges prisoners from its landscape and makes their plight powerfully, alarmingly conspicuous. In a concept similar to the "blocking" technology from the "Arkangel" episode of Netflix's Black Mirror, Rollins' near-future government uses mobile invisibility fields to both mask and regulate its most dangerous criminals.

The fields are generated by black metal spheres, bristling with ominous appendages, that float just above the invisible person. Called GARDs, these drones hover over the crowds in urban areas, keeping the prisoners beneath out of sight and out of communication with ordinary people. The architecture of state power is menacingly ever-present, but the individuals caught within it are obliterated.

Besides being deprived of the ability to be seen, the prisoners are kept from seeing their floating jailers. A GARD, explains the brilliant and unscrupulous scientist Marc Lepore, "is always exactly one meter behind and .5 meters above the prisoner's head. If the prisoner looks one way, it moves the other, as quickly as it needs to." A particularly thoughtful kind of malice would seem to be required to cripple an invisible prisoner's perceptions in such a deliberate (and thematically resonant) way. But this malicious mind is never evident in The Furnace — on the contrary, one of Rollins' themes is the corruptibility of ordinary men. The scientists we see working to refine the GARDs — Lepore and protagonist Walton — are only carrying out orders from higher up. The whole sadistic program seems to have evolved through a series of bureaucratic decisions: The GARDs are cheaper than traditional incarceration, they allow the prisoners a degree of freedom, and so on.

The GARD idea is weird enough, and Rollins is a good enough storyteller, that the narrative remains unpredictable. That keeps things interesting when Walton's endless self-recriminations get to be too soggy. In truth, this book's greatest weakness is its protagonist. Walton was once a brilliant young scientist, but he's never stopped regretting his involvement in the GARD program — and although Rollins suggests this regret is what's turned Walton into a washed-up alcoholic, it's hard to imagine any better fate for such a sad sack. His fellow scientist Marc may be more evil, but at least he's not a sap.

Even if you're not inclined to meditate on punishment and human nature, 'The Furnace's visuals make it a page-turner.

Fortunately, Rollins' deft art beguiles even when Walton won't stop whining. It's hard to say what's more visually appealing: The light, elegant lines of futuristic cites, the slightly off-kilter faces or the overflowing backgrounds that bespeak an artist who's having as much fun as possible. Rollins' style is tight and a bit antiseptic, like mainstream manga, but he takes plenty of chances. He delights in the formal problems presented by deep, complicated compositions and bodies viewed from unusual angles. Those backgrounds are a wonder, too: He throws in all sorts of incongruous detail just because he can. When Walton and Marc walk on the beach, chewing over the ethics of GARDs yet again, Rollins allows their hair to blow every which way and, for his own oddball reasons, fills the sky with faint topographic-style outlines.

Whoever it was at Tor, Rollins' publisher, who decided to print The Furnace on uncoated stock was really onto something. The butter-colored, textured paper immediately imbues the book with a sense of artistic portent and indie idiosyncrasy. A slick surface would have accentuated the cleanness of Rollins' style, making it seem sterile and mass-produced, but the slight roughness offsets his sharp lines nicely. Even if you're not inclined to meditate on punishment and human nature, The Furnace's visuals make it a page-turner.