Accessibility links
'We Need To Take A Stand': U.K. Protesters Mobilize For Trump's Visit President Trump arrives in the U.K. after a bitter NATO summit. Demonstrators will be waiting for him. 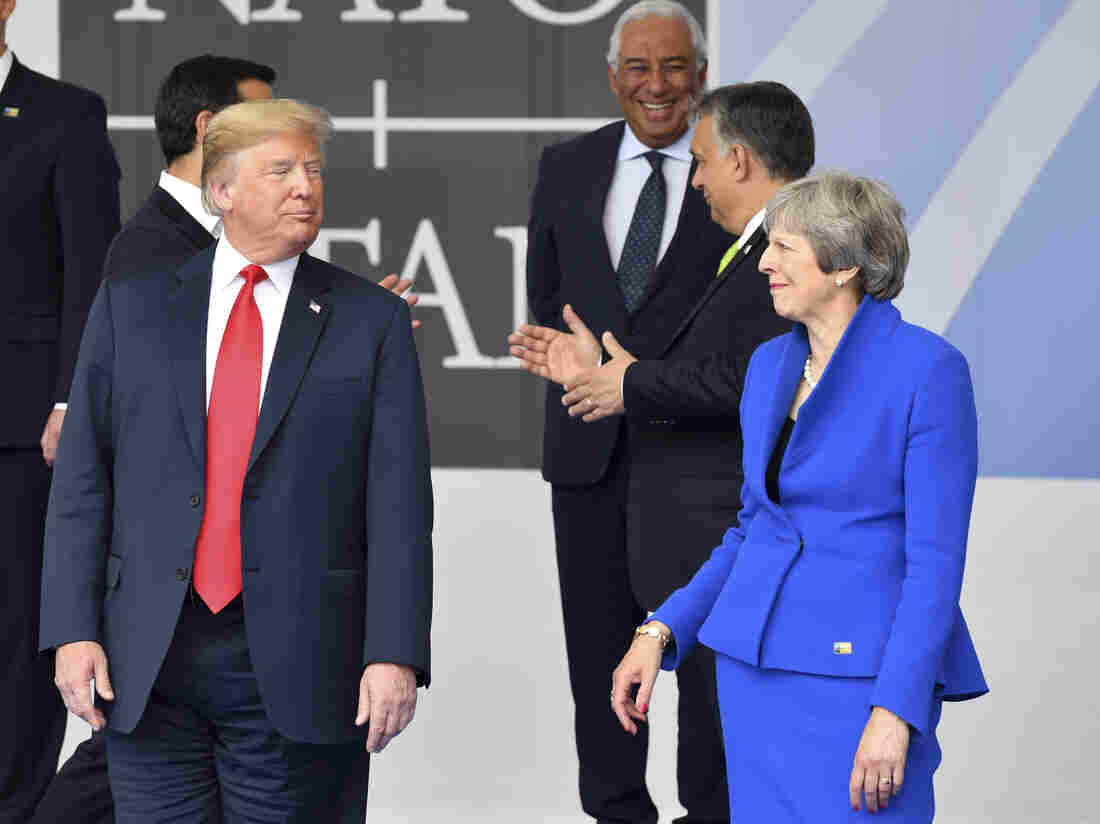 President Trump and British Prime Minister Theresa May, seen during a NATO summit in Brussels on Wednesday, will reconvene this week in the United Kingdom. Geert Vanden Wijngaert/AP hide caption 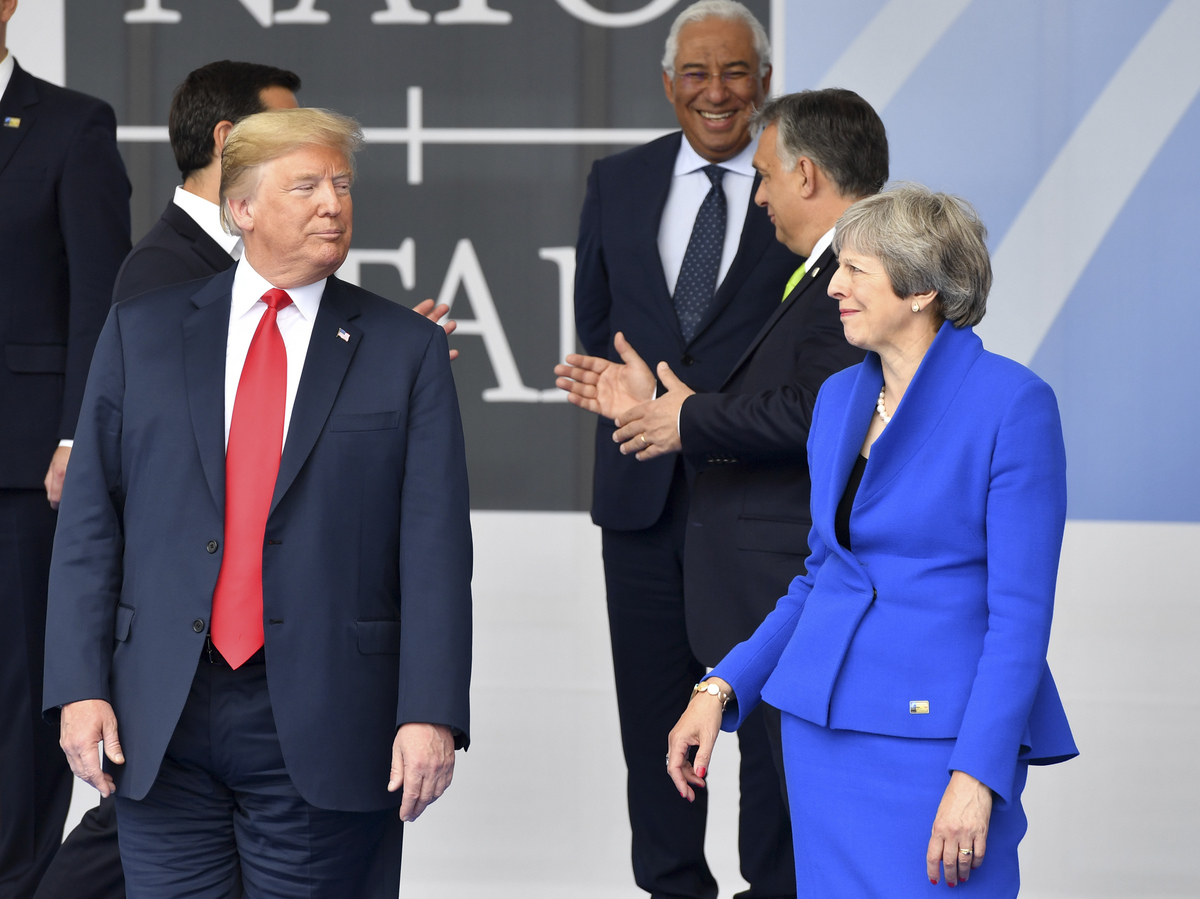 President Trump and British Prime Minister Theresa May, seen during a NATO summit in Brussels on Wednesday, will reconvene this week in the United Kingdom.

The bond between the United States and the United Kingdom runs deep. The phrase "special relationship" was made famous by Prime Minister Winston Churchill in a speech in Missouri in 1946, after the two countries fought shoulder to shoulder in World War II.

Security is still a cornerstone of the relationship, as are trade and less tangible things like shared language and the fact that many Americans are proud of their British roots.

But as President Trump arrives in Britain on Thursday, he will find plenty of people who think it is more important to oppose him than it is to nurture U.S.-U.K. ties.

"It is in the interests of the U.K. to stand up and take a firm moral stance," said Zoe Gardner, a researcher and spokesperson of the Stop Trump Coalition, which is organizing protests this week in cities across the country. "We are at a very key point in history right now, and we need to take a stand."

Gardner, who works with refugees as part of her doctoral research at the London School of Economics, said Trump's speeches about refugees and immigrants are "a very dangerous line of rhetoric to be normalized."

The demonstrations are expected to attract large crowds. A giant inflatable depiction of Trump as a nearly naked baby will hover above Parliament Square. Permission for the float was issued by London Mayor Sadiq Khan, who has exchanged back-and-forth criticism with Trump. 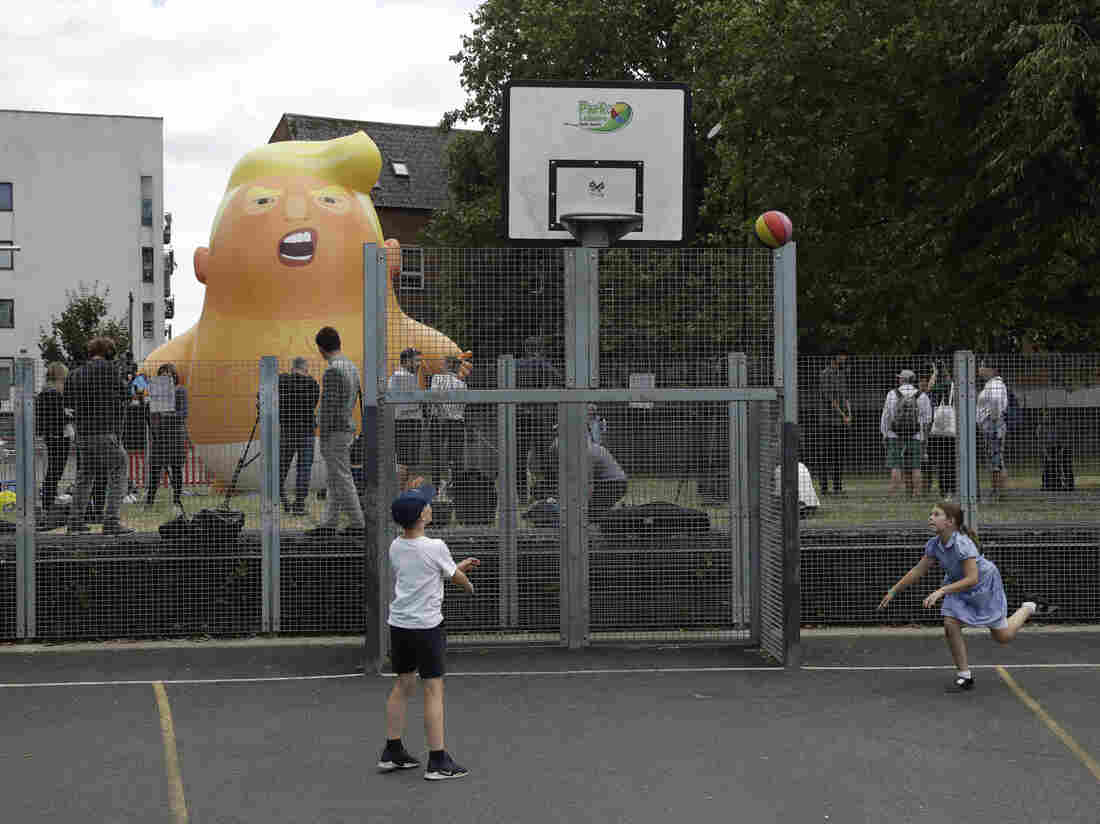 A 20-foot-tall blimp depicting President Trump as a cartoon baby stands inflated in London's Bingfield Park. It will hover above Parliament Square later this week during the president's visit. Matt Dunham/AP hide caption 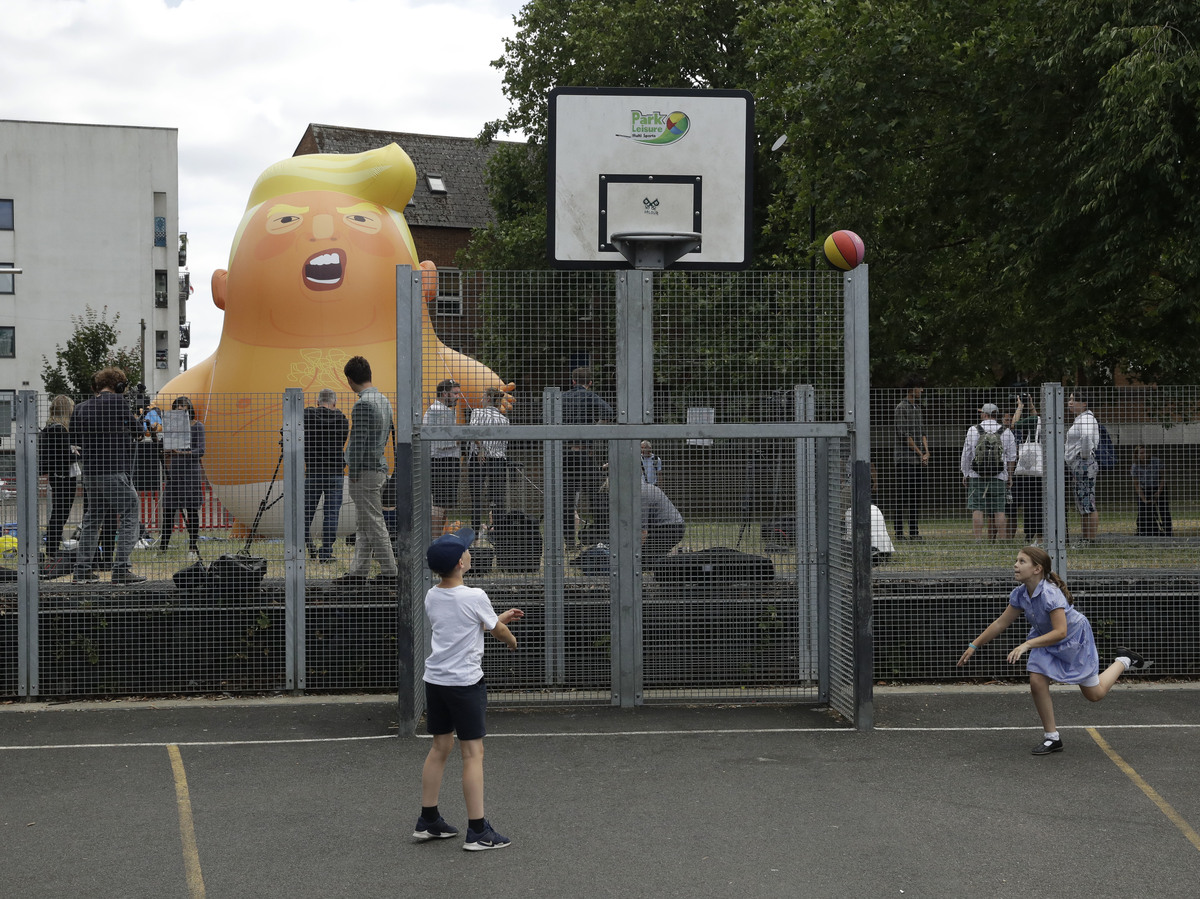 A 20-foot-tall blimp depicting President Trump as a cartoon baby stands inflated in London's Bingfield Park. It will hover above Parliament Square later this week during the president's visit.

The U.S. Embassy in London alerted American citizens there to "exercise caution" and "keep a low profile."

Trump heads to the U.K. after this week's NATO summit in Brussels, at which he slammed allies for not spending more on defense.

He arrives about a year and a half after Prime Minister Theresa May invited him for a visit, an invitation that was met intense opposition in the U.K. — almost 2 million people signed a petition to rescind the invite.

Some British citizens are even more distressed about Trump than they are about the U.K.'s own feverish political turmoil. That includes this week's resignations of members of the Cabinet and Parliament over May's proposals to keep some agreements intact after leaving the European Union next year.

In the busy south London neighborhood of Brixton, Victor Greetham, who runs a jazz bar, said he hasn't been to a demonstration since he protested against the Iraq War in 2003, but he planned to attend one of the protests against Trump's visit.

"It's a disastrous and divisive time, and Trump is very much part of that," he said. "You need to be a part of saying no to some of these people. I'm 54 years old, we lived through pretty good times. We seem to be going into a cycle of rather regressive thinking."

May has had to defend Trump's visit in the face of fiery criticism from opposition lawmakers. She pointed out there are many issues that legislators have urged her to raise with her American counterpart.

Last month, Labour member of Parliament Gavin Shuker ran down a list of objections to Trump: the separation of migrant families and detention of children; the U.S. departure from the United Nations' Human Rights Council; the U.S. president's praise for North Korean leader Kim Jong Un.

The prime minister will host a gala dinner and a meeting with Trump, giving them time to talk. She said they will discuss security and defense, an aspect of the relationship that is causing anxiety for some British politicians.

In June, Defense Secretary Jim Mattis wrote to his British counterpart Gavin Williamson warning that if the U.K. wants "to remain the U.S. partner of choice," it should spend more on defense and noted that France is increasing military spending.

It would be a blow for Britain to lose that special status, said Shashank Joshi, a British security analyst. "They trust us with stuff on intelligence," he said. "They trust us on issues to do with nuclear missiles in a way that they don't trust any other country."

But that could change. Joshi added that the defense community's worry "is that Trump will wake up one day and say, 'Hey, why are we giving all this stuff to the Brits?' "

The economic and trade relationship with the U.S. is also vital: The U.S. is the U.K.'s single largest trading partner. The future of its ties is uncertain, muddied by confusion over Brexit.

"There is definitely a sense that Britain needs America more because of Brexit," said Bronwen Maddox, head of the Institute for Government, a think tank. "Britain is going to have to look right around the world for allies with which to do trade deals."

Yet according to David Wemer of the Atlantic Council, a new U.S.-U.K. trade deal isn't a high priority for the Trump administration.

Trump is not expected to spend time in central London. The prime minister will host him for dinner at Blenheim Palace, the ancestral home of Churchill near Oxford, and then for the meeting at the prime ministerial country retreat Chequers, north of London.

The president is then set to take tea with Queen Elizabeth II at Windsor Castle, before heading to Scotland and the rolling green landscape of his golf course.

Then on Monday, he will be off to Helsinki to meet with Russian President Vladimir Putin.

An earlier version of this story incorrectly said President Trump was going to be in the United Kingdom for a state visit. It has not officially been designated a state visit.