Accessibility links
Emmy Nominations 2018: Complete List of Nominees For the first time in years, the venerable Modern Family and its cast failed to nab a nomination, making room for several freshman comedies — and new faces.

Emmy Nominations Analysis: Lots Of Old, But Something New

Emmy Nominations Analysis: Lots Of Old, But Something New 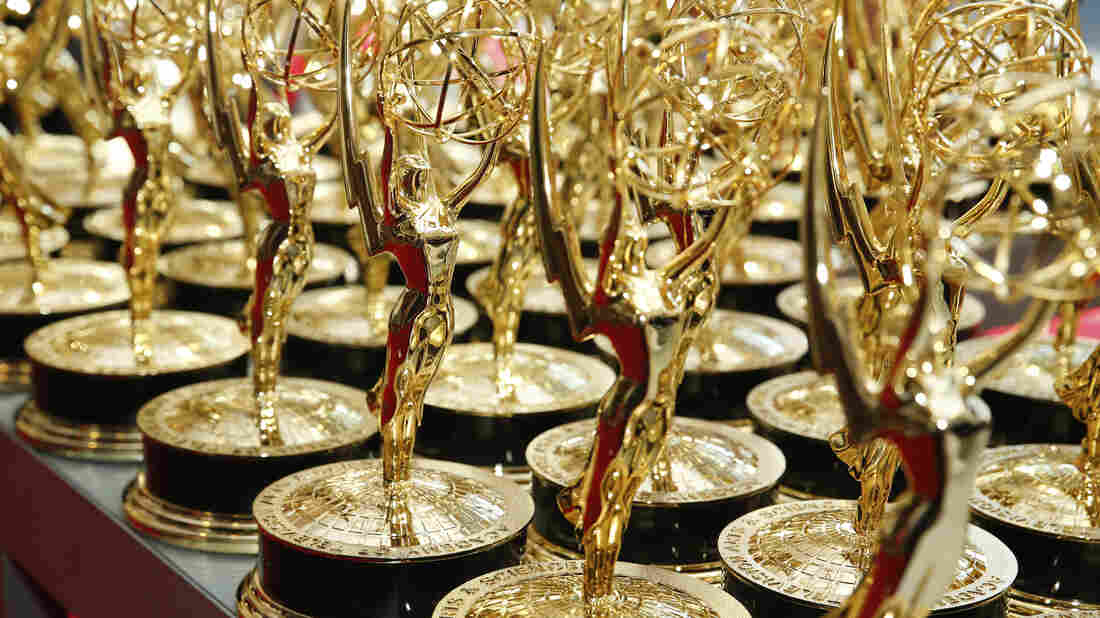 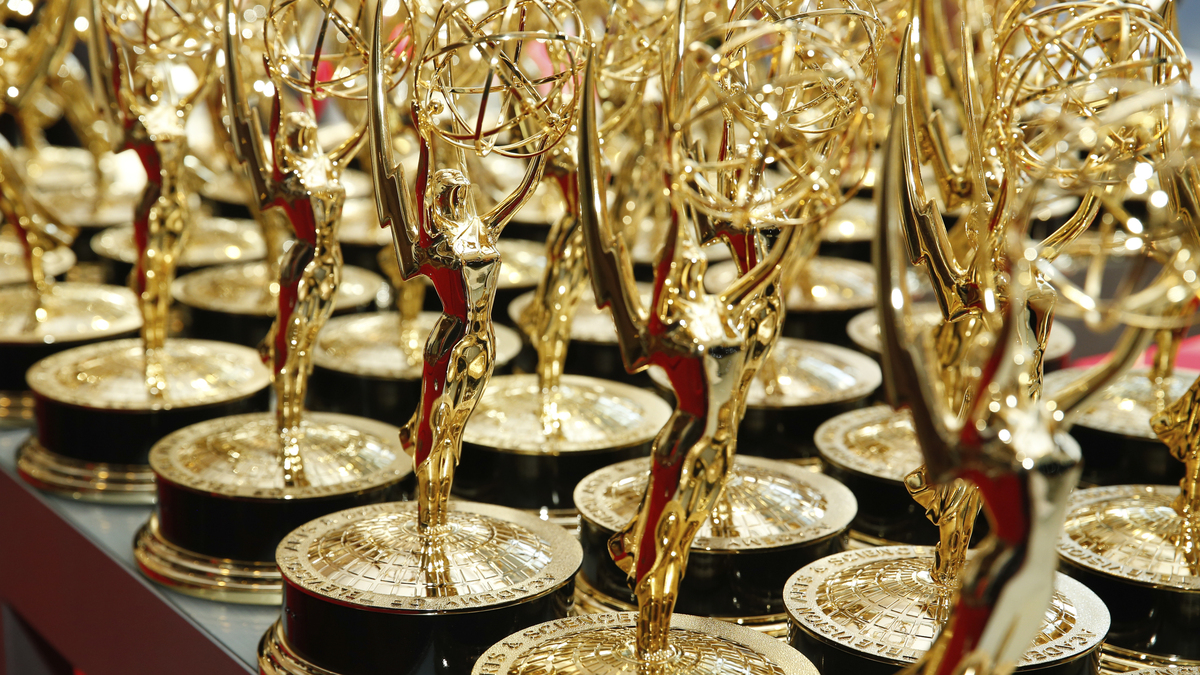 Emmy statues stand on a table during the 69th Primetime Emmy Awards.

To see the best stories inside the Emmy nominations, you often have to look past the ones that often make headlines. The big nomination numbers were raked in by familiar nominees: Game of Thrones was the leader with 22 nominations, Saturday Night Live and Westworld had 21, The Handmaid's Tale 20. In comedy, Atlanta led with 16, but the next two spots went to first-year series: Amazon's The Marvelous Mrs. Maisel with 14 and Barry right behind at 13.

This year, five of the drama series nominations are exactly the same as last year: The Handmaid's Tale, Westworld, The Crown, This is Us, and Stranger Things. The two that didn't repeat, Better Call Saul and House of Cards, were both ineligible. Taking their spots are Game of Thrones, which wasn't eligible last year, and The Americans, which missed out last year but had been nominated in 2016. In other words, the big drama series nominees are just about as similar as they could have been to recent history.

Identity And The End Of 'The Americans'

On the comedy side, there are four repeats from last year: Silicon Valley, Unbreakable Kimmy Schmidt, Black-ish, and Atlanta. Veep and Master of None weren't eligible to repeat; the additional nominees are Curb Your Enthusiasm, which has been around forever; Barry, HBO's very dark comedy about a hit man starring Bill Hader; The Marvelous Mrs. Maisel from Amazon; and GLOW from Netflix. The last three of those are all nominated in their first year of eligibility, which is where comedy shows itself to be a much more open field than drama. The other big story, though, is that Modern Family, which has been nominated eight years in a row and won the first five times in a row, finally fell off the list. Its actors did, too, ending a long residence that sometimes dominated the comedic acting nominations.

As some actors left the stage, others surged forward: Issa Rae is a first-time nominee for lead actress in her comedy series Insecure. Ted Danson hasn't been nominated for a comedy series since Cheers (he was nominated a few times for the drama series Damages), but he was recognized for his work on NBC's inventive The Good Place. Zazie Beetz won her first nomination as Van on Atlanta. John Legend, Sara Bareilles and Brandon Victor Dixon are all first-time nominees for the NBC telecast of Jesus Christ Superstar Live in Concert. Letitia Wright, who broke out huge in Black Panther as Shuri, was nominated for her Black Mirror episode, "Black Museum." And Sterling K. Brown has now been nominated for very different performances in three different categories on three different shows in three years: The People vs. O.J. Simpson: American Crime Story in 2016, This is Us in 2017 and again this year, and now also a guest shot on Brooklyn Nine-Nine, where he was very funny as an interrogated suspect.

As is often the case, you'll find some fun stories in less publicized categories. Netflix's Black Mirror installment "U.S.S. Callister," which is fun, strange, scary and painfully timely, pulled a nomination for best TV movie (last year's winner was Black Mirror's "San Junipero"), and for its busy lead actor Jesse Plemons. Megan Amram, a writer on The Good Place who's known on Twitter for tweeting "Today is the day Donald Trump finally became president" every single day, made a comedy web series called An Emmy For Megan, which explicitly parodied overwrought awards-friendly cliches and was made only to try to land her an Emmy nomination for outstanding actress in a short-form comedy or drama series. She was nominated. So was her series.

There are certainly nominations that many hoped for that didn't come through. While Sandra Oh was nominated for her leading role on BBC America's excellent Killing Eve, the series itself wasn't nominated. Neither was any aspect of Netflix's well-loved One Day At A Time, other than multi-camera editing. Those hoping for a big showing for the return of Twin Peaks got directing and writing nominations plus seven other more technical awards, but the series and acting categories left the show out. There was nothing at all for either Crazy Ex-Girlfriend or Jane The Virgin, the CW's pair of smart, unique comedy-dramas about women.

Approaching the Emmy nominations in particular — because of their sheer volume — as a reliable list of bests is a losing game. It will always end in disappointment over what wasn't recognized. But a lot of these nominees are well worth watching for those who haven't seen them, and the upside of the overstuffed TV landscape is that we'll never lack worthy options.

Below is the list of this year's Emmy nominees.

The Truck, The Choice And The 'Handmaid's Tale' Finale

Sterling K. Brown (This Is Us)

Milo Ventimiglia (This Is Us)

Cicely Tyson (How To Get Away With Murder)

Ron Cephas Jones (This Is Us)

Gerald McRaney (This Is Us)

'We Built This': 'Black-ish' Makes A Piercing, Vital Juneteenth Musical

Megan Mullally (Will And Grace)

Molly Shannon (Will And Grace)

Outstanding lead actress in a limited series or movie

Outstanding lead actor in a limited series or movie

Outstanding supporting actress in a limited series or movie

Outstanding supporting actor in a limited series or movie

At Home With Amy Sedaris (TruTV)

I Love You, America With Sarah Silverman (Hulu)

Who Do You Think You Are? (TLC)

Outstanding host for a reality or reality-competition program

Night of Too Many Stars: America Unites for Autism Programs (HBO)

Steve Martin & Martin Short: An Evening You Will Forget for the Rest of Your Life (Netflix)

My Next Guest Needs No Introduction With David Letterman (Netflix)

The Defiant Ones (HBO)

A Series of Unfortunate Events (Netflix)

Outstanding directing in a drama series

Outstanding directing in a comedy series

Outstanding directing in a variety series

Outstanding directing in a limited series or movie

Outstanding writing in a drama series

Outstanding writing in a comedy series

Outstanding writing in a variety series

The Late Show With Stephen Colbert

Outstanding writing in a limited series or movie