Accessibility links
Stormy Daniels Update: Charges Dismissed After Arrest At Ohio Strip Club The adult entertainer who has sued President Trump was arrested on Wednesday while performing at a Columbus strip club, after allegedly violating a law that limits touching in such establishments. 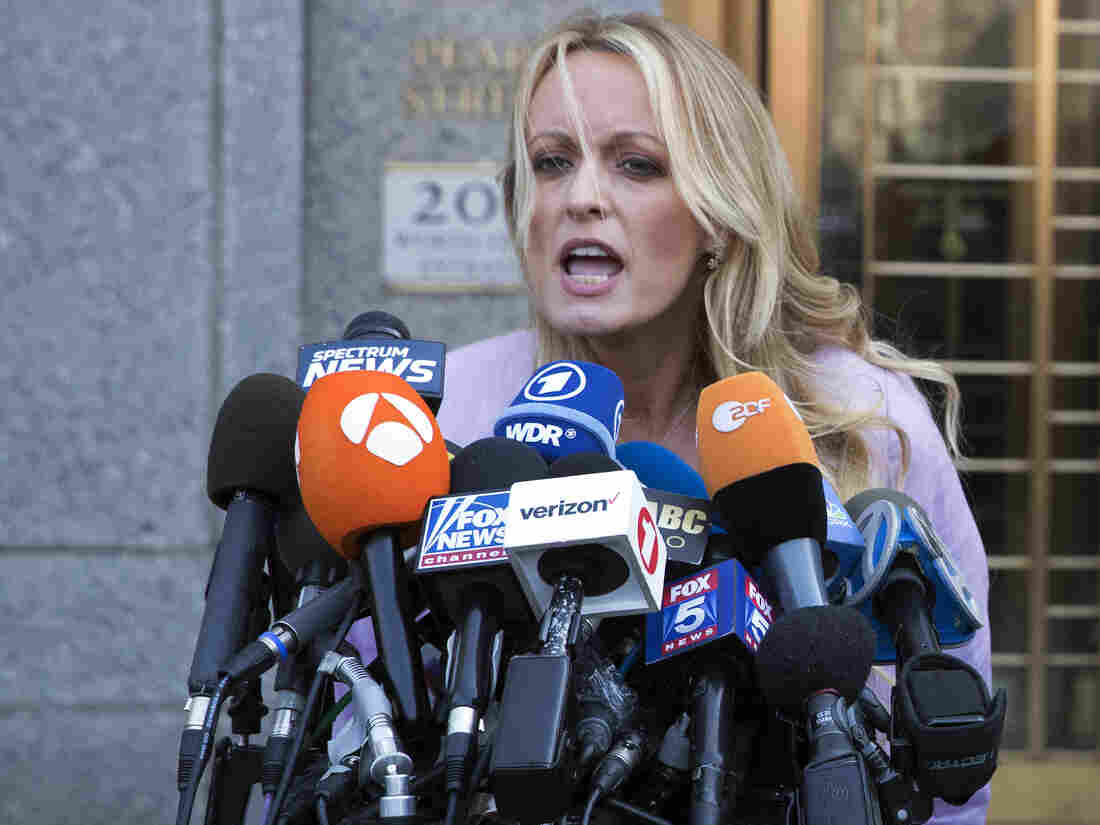 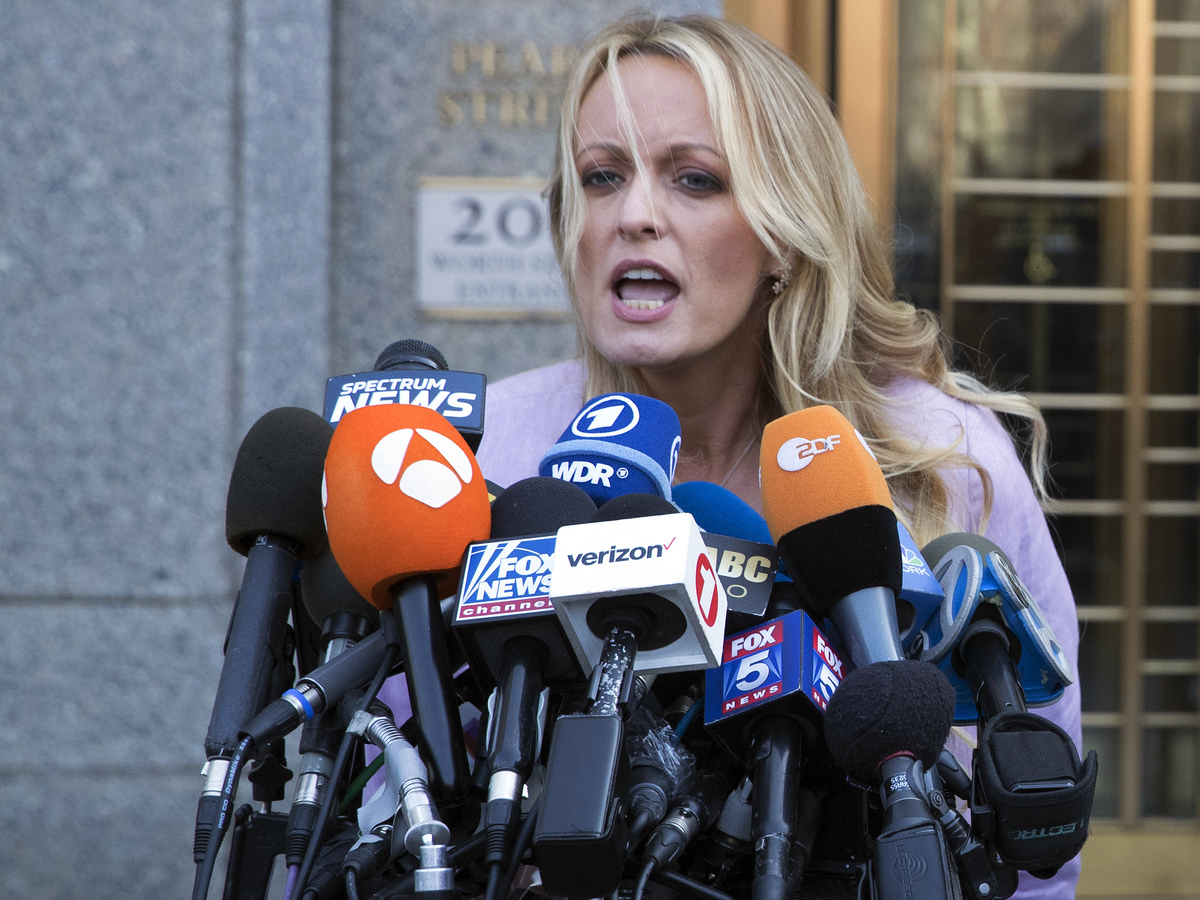 Adult film actress Stormy Daniels speaks outside federal court, in April in New York. She had filed suit charging that President Trump had defamed her.

Prosecutors in Columbus, Ohio, have dropped criminal charges against Stormy Daniels, the adult entertainer who is suing President Trump, after she was arrested at a strip club Wednesday night for allegedly violating a law that limits touching in such establishments.

I am pleased to report that the charges against my client @stormydaniels have been dismissed in their entirety (below motion was just granted). I want to thank Joe Gibson & his colleagues at the prosecutors ofc for their professionalism starting with our first call early this am. pic.twitter.com/xHPSWsyqM2

"I am pleased to report that the charges against my client ... have been dismissed in their entirety," Daniels' attorney, Michael Avenatti, said in a tweet around midday on Thursday. He added a photo of the prosecutors' motion to dismiss all three charges against Daniels, which a judge has granted.

In requesting to dismiss the charges, prosecutors said the Ohio law that was invoked to arrest Daniels was meant to apply only to a person "who regularly appears nude or seminude on the premises of a sexually oriented business" — and that because Daniels hasn't been a regular at Sirens, the strip club in question, the case wouldn't hold up in court.

There is no sign yet of whether Daniels will return to the club Thursday night to complete what Sirens had billed as a special two-night engagement in Columbus.

In the initial hours after the arrest, Avenatti had tweeted that his client's arrest "was a setup & politically motivated."

Just rcvd word that my client @StormyDaniels was arrested in Columbus Ohio whole performing the same act she has performed across the nation at nearly a hundred strip clubs. This was a setup & politically motivated. It reeks of desperation. We will fight all bogus charges. #Basta

She was arrested for allegedly allowing a customer to touch her while on stage in a non sexual manner! Are you kidding me? They are devoting law enforcement resources to sting operations for this? There has to be higher priorities!!! #SetUp #Basta

"It reeks of desperation. We will fight all bogus charges," Avenatti said.

Daniels, whose real name is Stephanie Clifford, was performing at Sirens when some of the club's patrons touched her in a "non-sexual" way, Avenatti told The Associated Press.

However, police charging documents state that it was Daniels who touched patrons and several police officers during her performance Wednesday night, reporter Patrick Cooley of The Columbus Dispatch tells NPR's Here & Now.

"There were some patrons standing by the side of the stage. She would walk up to one of them, grab his head, put it in her chest and just shake her breasts around," Cooley said, citing the documents.

He says that according to the documents, at least four police officers who were there investigating possible vice-related violations saw what was happening. "Three of them went up to the stage, and she touched the officers in a similar manner," Cooley says. "And so they arrested her and two other employees of this club."

An Ohio law known as the Community Defense Act, passed in 2007, prohibits anyone who is not a family member from touching a nude or semi-nude dancer.

According to an article published last year in The Columbus Dispatch, the law, which also restricts the hours of operation for strip clubs and adult bookstores, is rarely enforced.

The article quoted the Franklin County Sheriff's Office as saying that in the decade since the law was enacted, it had never had "any complaints or reasons to apply" it.

"We have gone back as far as we have records for, and nothing has been found," a spokesman for the sheriff's office, Marc Gofstein, told the Dispatch.

Daniels' rise to national attention dates to October 2016, on the eve of the presidential election, when reports emerged that then-Trump attorney Michael Cohen had paid her $130,000 in "hush money" in exchange for her silence about an alleged 2007 affair.

In April, Daniels filed suit in federal court in New York charging that Trump had defamed her.

The president has denied the affair but has admitted to reimbursing Cohen for the payment. "The agreement was used to stop the false and extortionist accusations made by her about an affair," Trump tweeted in May, referring to Daniels.

A previous version of this story said Stormy Daniels was accused of letting patrons touch her while performing at an Ohio strip club. Charging documents state that she was accusing of touching patrons and police officers at the club.