Accessibility links
Ex-Premier Nawaz Sharif Arrested After Return To A Pakistan Riven By Violence Nawaz Sharif and his daughter were arrested upon arrival. With less than two weeks till elections, Pakistan is reeling from political violence, including an attack Friday that killed scores of people. 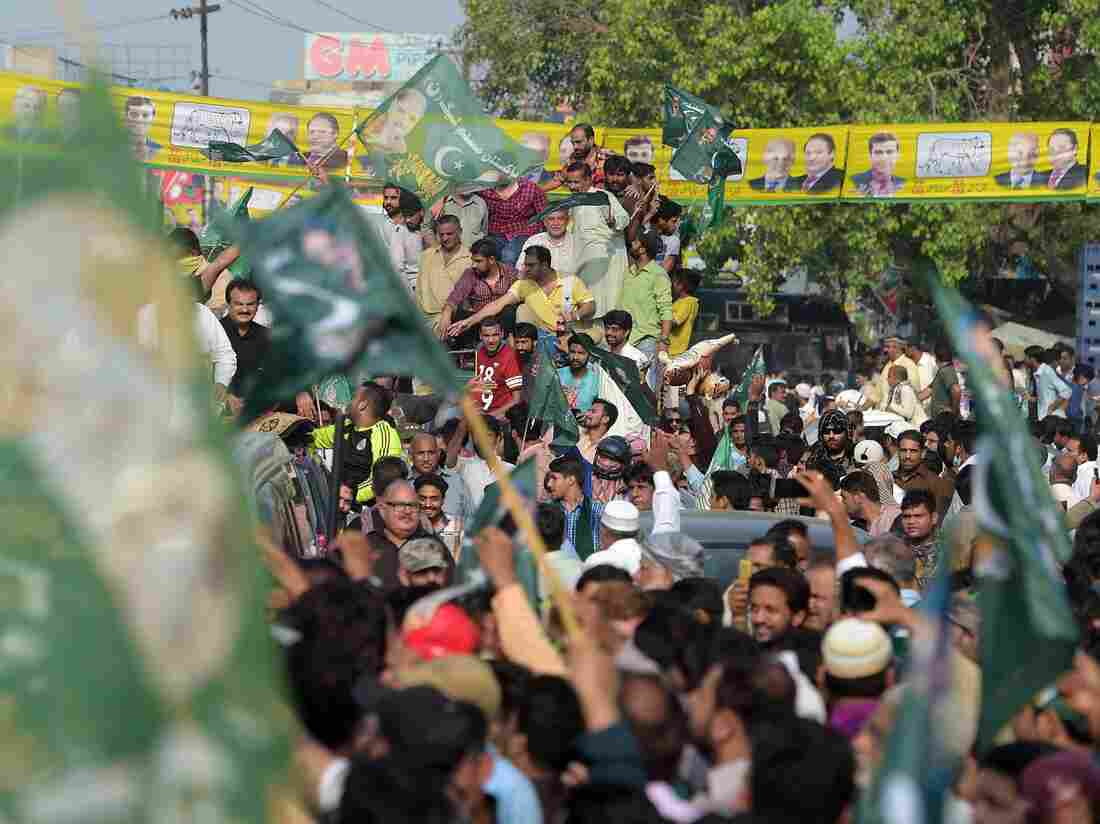 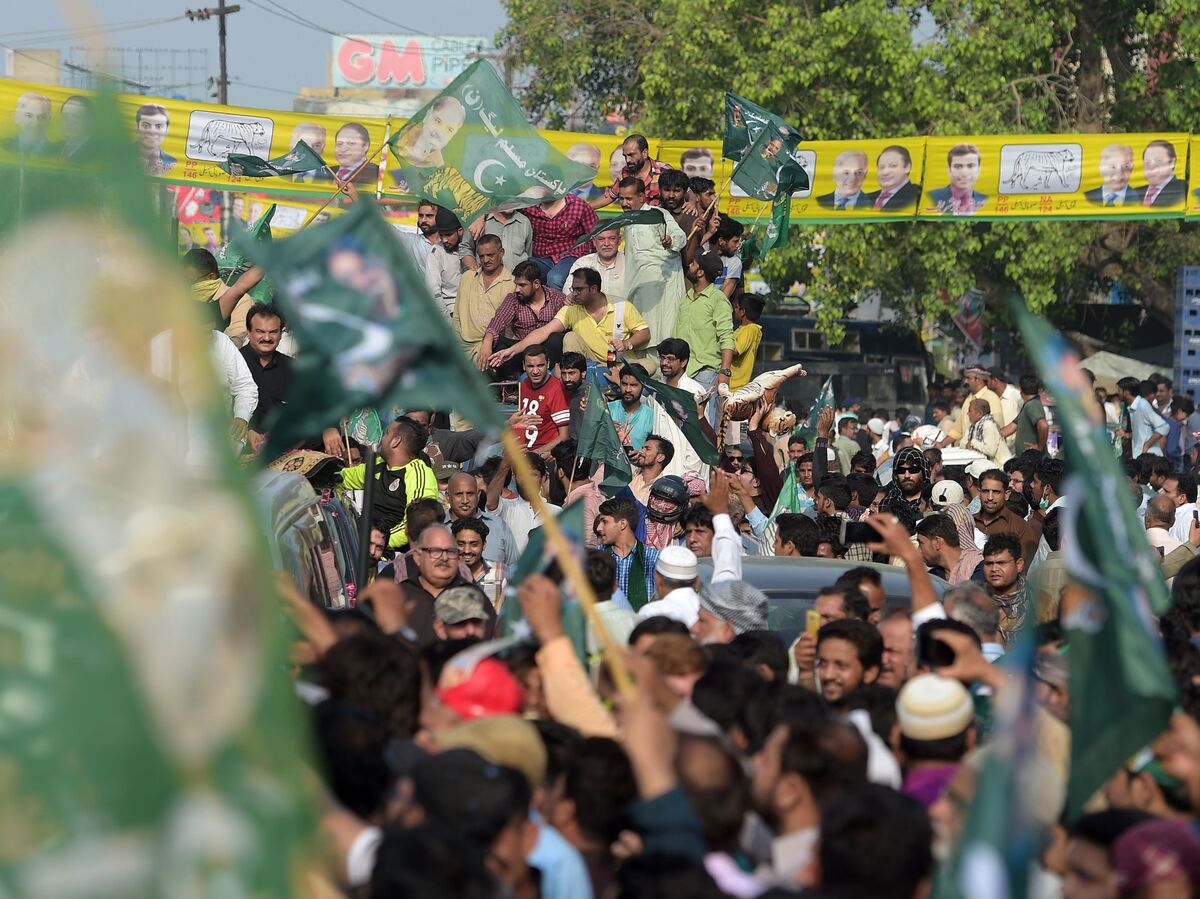 Supporters of ousted Pakistani Prime Minister Nawaz Sharif march toward Lahore's airport ahead of his arrival from London on Friday.

Just a week after receiving prison sentences while abroad, former Pakistani Prime Minister Nawaz Sharif and his daughter Maryam have returned to fight the corruption verdict in person. And police were in Lahore to greet them — with handcuffs ready. Law enforcement arrested father and daughter on the tarmac shortly after their arrival from London.

The Sharifs returned to a country in deep turmoil with less than two weeks to go before nationwide elections on July 25.

Far from Lahore, a deadly blast ripped through a political rally in the district of Mastung, killing dozens of people and injuring scores more on the country's southwestern border. Authorities say the suicide bombing claimed the lives of at least 128 people, including a prominent local politician who had organized the rally to support his candidacy for the legislature.

The BBC notes it was was the deadliest attack in Pakistan since 2014, when Taliban gunmen launched an assault on a school. 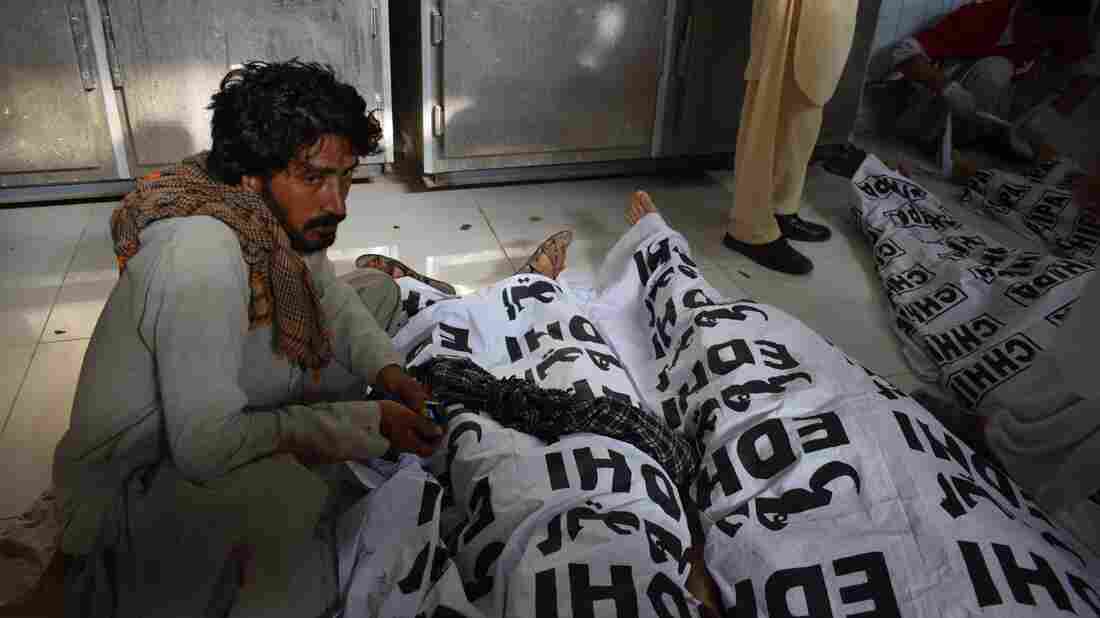 A man sits next to his relative's body Friday, shortly after bombing tore through a political rally in southwestern Pakistan. Banaras Khan/AFP/Getty Images hide caption 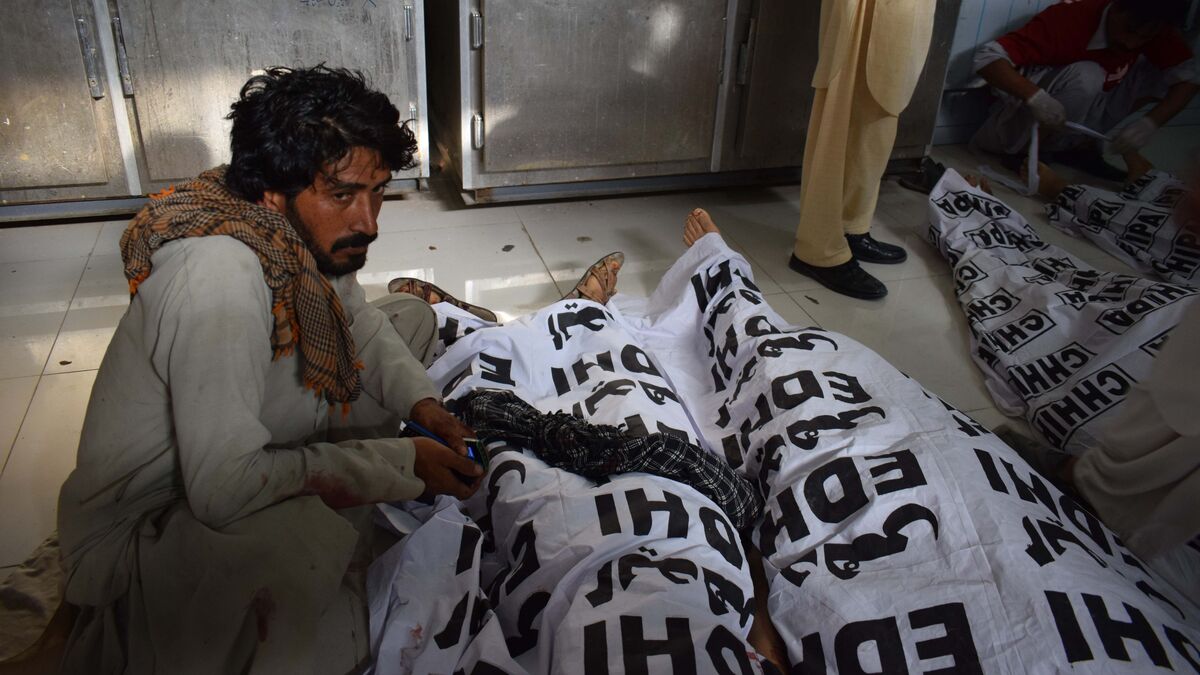 A man sits next to his relative's body Friday, shortly after bombing tore through a political rally in southwestern Pakistan.

In a statement released through his spokesperson, Pakistan's army chief of staff, Gen. Qamar Javed Bajwa, said Friday that he was "grieved on loss of precious lives."

"Attempts of inimical forces to derail important democratic activity shall not succeed," vowed the statement posted by his spokesperson.

Yet the apparently politically motivated attack was not the only one to befall Pakistan this week. In fact, it was the third assault on a campaign event in a matter of days.

Earlier Friday, another attack on a politician, this time in Bannu, killed several people. And just days ago, a suicide bombing killed a politician and at least nine other people in Peshawar. The Pakistani Taliban said it carried out the attack earlier this week; the Islamic State claimed responsibility for Friday's massacre in Mastung.

Meanwhile, in Lahore, thousands of Sharif supporters congregated at a centuries-old landmark and were marching on the northeastern city's airport. Shehbaz Sharif, brother of Nawaz and leader of their political party, the Pakistan Muslim League-Nawaz, planned to lead the rally protesting the hefty sentences meted out to his family members late last week.

As NPR's Diaa Hadid reports from Lahore, the protesters chanted while waving the green flags and toting stuffed tigers, the animal the party has adopted for its symbol.

At this time last year, Nawaz Sharif was still serving as premier — but revelations about his pricey, secretly owned London apartments, unearthed in the Panama Papers leaks, precipitated a months-long fall from power into legal woe. The three-time Pakistani leader was pried from office, banned from politics and finally, in an apparent coup de grace, was sentenced last week to 10 years in prison for owning assets beyond his income.

For their roles in the scandal, his daughter and her husband, retired army Capt. Safdar Awan, also received seven- and one-year sentences, respectively.

The Sharifs, who have had a rocky relationship with Pakistan's powerful military, have cast the sentences as part of a conspiracy to stifle their power before the nationwide general elections in less than two weeks. Held up at an airport in Abu Dhabi, waiting for a delayed connection home, Nawaz Sharif even urged people to "think about who delayed this flight and why."

"What is happening in this country today, what is happening in Lahore, raises questions regarding the elections. No other province is facing the situation we see in Lahore: hundreds of our party workers have been arrested; people are being pressured into switching loyalties," Nawaz Sharif told Pakistan's Dawn news service over the phone while waiting for his connection.

"All of this forms a question mark on the credibility of the election," he added.

Pakistan's caretaker government has cracked down on popular dissent in anticipation of the Sharifs' arrival, arresting hundreds of people in Lahore — many of whom were members of the Sharifs' party — and suspending cell phone service in parts of the city, according to Dawn.

And the unrest has not been confined merely to Lahore. The news service notes that dozens of protesters have been arrested and major intersections shut down in several other cities across the country.

Retired cricket star Imran Khan, the military-backed favorite to become next prime minister in the upcoming elections, has defended the government's response. And on Friday, he implied there could be a nefarious relationship between the Sharifs' arrival and the outburst of political violence this week, connecting the dots to suggest a conspiracy theory of his own.

"There seems to be a conspiracy to sabotage the 25 July elections but the people of Pakistan will not allow any design intended to target these historic elections to succeed," he tweeted. Shortly afterward he added that he's "beginning to wonder why whenever Nawaz Sharif is in trouble, there is increasing tension along Pakistan's borders and a rise in terrorist acts? Is it a mere coincidence?"

Strongly condemn the terrorist attack on Akram Durrani & his convoy. There seems to be a conspiracy to sabotage the 25 July elections but the people of Pakistan will not allow any design intended to target these historic elections to succeed.

According to Sharif himself, though, Pakistan simply has reached a "critical juncture."

"I have done what I could," he said in a video recorded aboard his flight and tweeted by his Maryam Sharif, according to a translation by Dawn. "I am aware that I have been sentenced to 10 years [in prison] and I will be taken to a jail cell straight away — but I want the Pakistani nation to know that I am doing this for you."