Accessibility links
Mueller Indicts 12 Russian Intelligence Officers In DNC Hacking Case The Justice Department announced Friday that a new indictment had been unsealed against 12 Russians connected to hacking of Democratic Party and other targets. 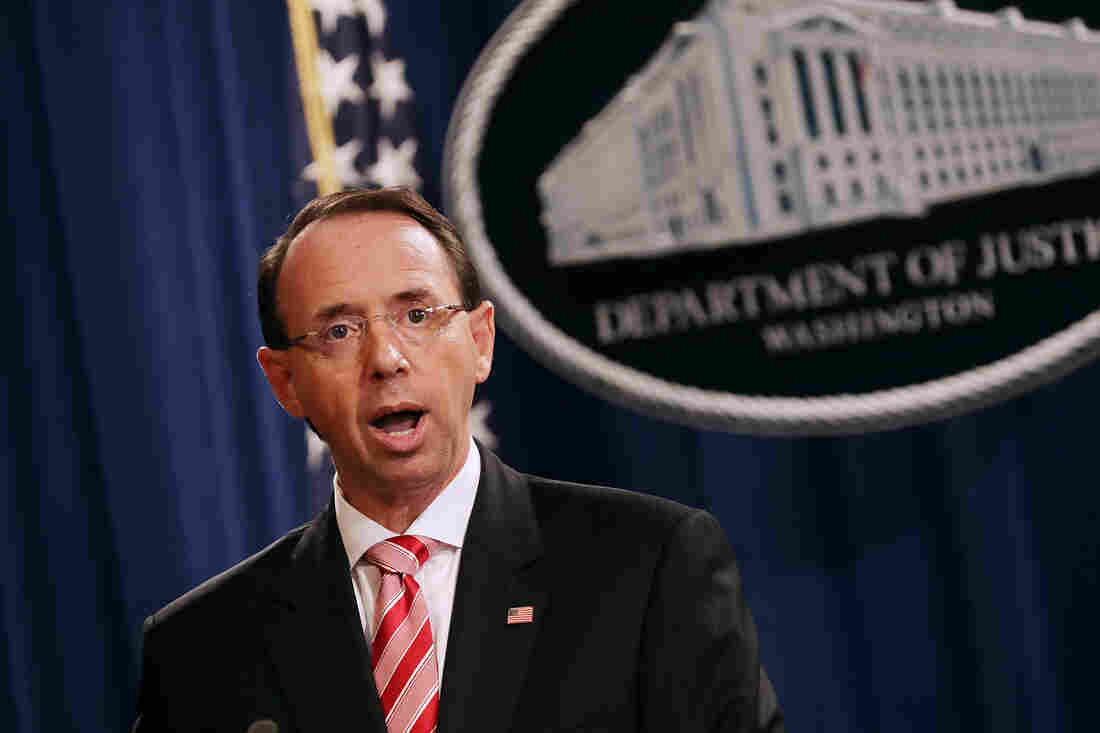 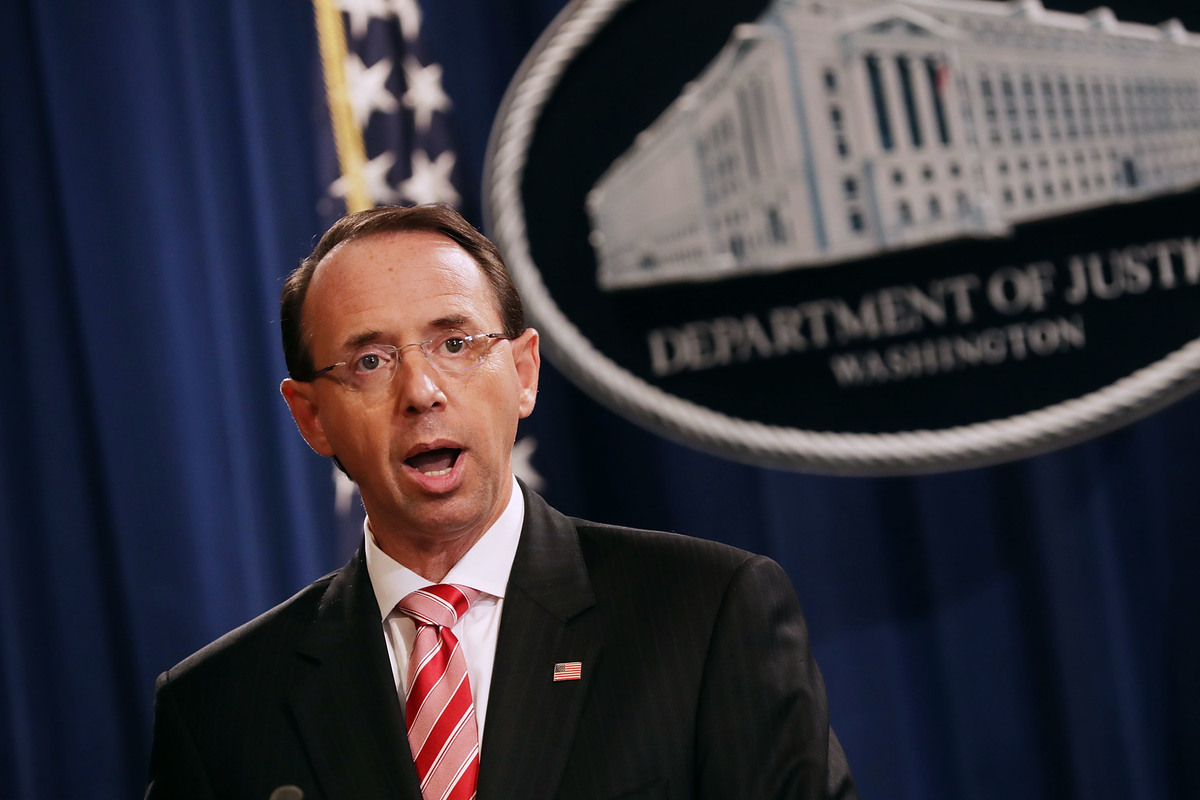 The Justice Department charged 12 Russian intelligence officers on Friday with a litany of alleged offenses related to Russia's hacking of the Democratic National Committee's emails, state election systems and other targets in 2016.

Deputy Attorney General Rod Rosenstein, who announced the indictments, said the Russians involved belonged to the military intelligence service GRU. They are accused of a sustained cyberattack against Democratic Party targets, including its campaign committee and Hillary Clinton's campaign.

The attacks were a signature feature of Russia's active measures against the United States; embarrassing emails were passed to WikiLeaks, which released them publicly. The GRU also created other ways to pass the material it stole into the public, including a website called DCLeaks and a fake persona called "Guccifer 2.0."

The flood of embarrassing information about the inner workings of the Democratic Party's leadership led to the resignation of then-DNC Chairwoman Debbie Wasserman-Schultz. Later, Clinton's campaign chairman John Podesta also was embarrassed by the release of his emails.

The Russians named in the indictment discussed how and when to release material they had accumulated to make the biggest political splash inside the United States, Rosenstein said.

There is no allegation in the indictment that any American participated knowingly in the GRU cyberattacks, Rosenstein said.

Justice Department special counsel Robert Mueller is continuing to investigate whether anyone in the United States conspired with the Russian attack on the election.

But Rosenstein said that responsibility for this prosecution — which is unlikely to go forward to a trial in court as Russia is unlikely to extradite the suspects who have been charged — would pass from Mueller's office to the national security division of the Justice Department.

Friday's announcement follows a separate but related indictment by the special counsel's office from earlier this year of Russians allegedly connected to the campaign of social media agitation aimed at amplifying political controversy within the United States.

The Russian government has so far declined to extradite the people named, although one American attorney has been arguing the case in Washington on behalf of a company that's involved.

Rosenstein asked Americans to not only focus on who was hurt by or benefited politically from the Russian attacks but to unite against foreign influence in the American democratic process.

"In my remarks, I have not identified the victims," Rosenstein said. "When we confront foreign interference in American elections, it is important for us to avoid thinking politically as Republicans or Democrats and instead to think patriotically as Americans. Our response must not depend on who was victimized."

The U.S. intelligence community has concluded, with further verification by the Senate intelligence committee, that Russia's active measures were aimed at hurting Clinton and helping Trump.

White House spokeswoman Lindsay Walter emphasized that no one in the Trump campaign was connected with the indictment unsealed on Friday.

"Today's charges include no allegations of knowing involvement by anyone on the campaign and no allegations that the alleged hacking affected the election result," she said. "This is consistent with what we have been saying all along."

Separately, one of Trump's lawyers, former New York Mayor Rudy Giuliani, welcomed the Justice Department announcement and said it showed that Mueller should finish up soon.

"The indictments Rod Rosenstein announced are good news for all Americans," he wrote on Twitter. "The Russians are nailed. No Americans are involved. Time for Mueller to end this pursuit of the President and say President Trump is completely innocent."

The indictments Rod Rosenstein announced are good news for all Americans. The Russians are nailed. No Americans are involved. Time for Mueller to end this pursuit of the President and say President Trump is completely innocent.

The Americans who were unwittingly communicating with the Russian spies included a candidate for Congress — who is not identified — and at least one journalist. At least "one person who was in regular contact with senior members of the presidential campaign" also communicated with the GRU officers.

The indictment also says that on July 27, 2016, the GRU officers "attempted after hours to spearphish for the first time email accounts at a domain hosted by a third-party provider and used by Clinton's personal office." They also pinged 76 emails associated with the Clinton campaign.

July 27 was the day that Trump said, "Russia, if you're listening, I hope you're able to find the 30,000 emails that are missing" from Clinton's email servers.

Rosenstein's announcement took place just ahead of a planned meeting between President Trump and Russian President Vladimir Putin on Monday in Helsinki.

Trump told reporters Friday during his visit to the United Kingdom that he planned to "ask" Putin about Russia's attack on the election.

Trump has gone back and forth as to what he acknowledges about what took place and has cited Russia's official denials about its active measures. The president also has said the interference took place and vowed that if it returned in the 2018 midterm election — as U.S. intelligence officials have warned it may — he would "counteract it very strongly."

Rosenstein said the announcement of the charges on Friday took place because that was when the special counsel's office had completed its work investigating them and had the ability to present the evidence to a grand jury. The deputy attorney general said he had briefed the president about the matter.

Russia's foreign ministry said the indictments were an attempt to "spoil" the meeting.

Virginia Sen. Mark Warner, the top Democrat on the Senate intelligence committee, called on Trump to cancel his one-on-one meeting with Putin in Helsinki.

Warner told reporters on Capitol Hill that he worried that Trump's "ad hoc style" in which he "does not prepare" would be "taken advantage of" by Putin.

House Minority Leader Nancy Pelosi, D-Calif., said the indictment emphasized how tough Trump must be on Putin at their summit.

"The stakes for the upcoming Trump-Putin meeting could not be higher," Pelosi said. "President Trump must demand and secure a real, concrete and comprehensive agreement that the Russians will cease their ongoing attacks on our democracy. Failure to stand up to Putin would constitute a profound betrayal of the Constitution and our democracy."

Pelosi later joined other Democrats on Friday in calling for Trump to cancel his meeting with Putin.

Republicans stopped short of calling for Trump to cancel his meeting but some of them did also call for the president to take a firm line.

"All patriotic Americans should understand that Putin is not America's friend, and he is not the president's buddy," said Nebraska Sen. Ben Sasse. "We should stand united against Putin's past and planned future attacks against us."

South Carolina Rep. Trey Gowdy, chairman of the House oversight committee, echoed the note that Rosenstein sounded about how Americans of all political parties should be concerned about foreign election interference.

"I am pleased Russia is being held accountable for their actions against our country," Gowdy said. "This was not an attack on Republicans or an attack on Democrats — this was an attack on the United States."

The oversight committee plans to convene a hearing about election security by the end of July.

The indictment unsealed on Friday is available here.