Accessibility links
In 'The Cost Of Living,' Renouncing Serenity For A Life In Motion Deborah Levy's brilliant new memoir opens at a time of great change in her life — divorce, deaths, moving house — and it's full of the feeling of travel and movement, but preoccupied with home. 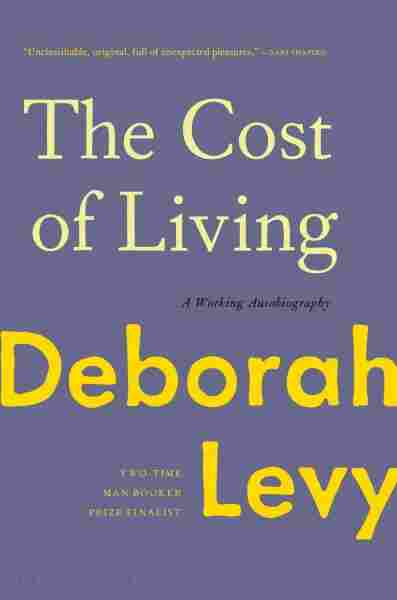 The Cost of Living

In her first novel, Swallowing Geography, the English novelist and playwright Deborah Levy described a character becoming "many selves in order to survive. Through observation, study, and meditation she taught herself to change from one self to another, from one state to another." It's an early, tossed-off line, but it predicts Levy's whole body of work. Over and over, this is the story she tells: First a woman learns to change selves, and then she chooses, defiantly, to be the one self she likes best.

The Cost of Living, Levy's second memoir, opens with this story in miniature. Levy is at a beach bar in Colombia, watching a young scuba diver hold her own in conversation against a middle-aged man she calls the Big Silver. The Big Silver is, very clearly, a jerk. He's rude enough to almost be threatening. When the young woman tells him a story, he responds, "You talk a lot, don't you?" And yet she keeps speaking, "making a bid to be someone braver than she felt, someone who could travel freely on her own, ... who could risk an impossibly complicated conversation with a stranger." Levy is filled with respect for the diver. She is, Levy decides, the correct audience for this book.

When The Cost of Living starts, Levy and her husband have just split. Her mother has recently died, her older daughter is leaving for college, and she and her younger daughter are living in a strange, shabby new apartment. For Levy, it's a time of total change; she is, as she puts it, both man and woman of the house. She's a Booker-nominated writer who turns up to meetings with with leaves in her hair. She's a writer without a desk who works on the balcony at night, then falls asleep outside in "jeans and boots, like a cowgirl." She's exhausted and exhilarated. She's traveling freely on her own.

An Epic Conversation Draws To A Close In 'Kudos'

The Cost of Living is filled with the feeling of travel, and yet one of its main preoccupations is home. Levy is clearly not sorry to have sold the house where she lived with her husband. "To strip the wallpaper off the fairy tale of The Family House in which the comfort and happiness of men and children have been the priority," she writes, "is to find behind it an unthanked, unloved, neglected, exhausted woman." Levy has been that woman for years, trying to "please everyone all the time in a bid for approval, home, children, and love." No wonder that now she wants motion.

But how can Levy create a home where she feels like she's moving? Rachel Cusk, her contemporary and closest intellectual match, wrote in an essay called "Making House" that "the 'search for happiness' is a kinetic state, and it follows that the most seductive of all the illusions of homemaking would be the illusion of permanence." In Cusk's novel Transit, the protagonist remodels her house in service, maybe, of that illusion. In The Cost of Living, permanence gets put aside. Levy starts writing in a friend's shed, far from her apartment and not much warmer than the balcony. She buys an electric bike and talks to her dead mother. She decides, very officially, that she's no longer interested in serenity. From now on, she will live, on purpose, in Cusk's kinetic state.

For writing this good, the cost of living is plainly the right price to pay.

This sounds impossible, which might be the point. When Levy renounces serenity, she notes, "Serenity is supposed to be one of the main characters in old-fashioned femininity's cultural personality." Serenity, permanence, and home-making. So what does new femininity look like? The scuba diver in Colombia? Yes, Levy decides by the end. New femininity, or the femininity she wants, is defined by the bid to be brave. To cross borders, to "find a new way of living."

So what is the titular cost? By the end, we know that for Levy, the cost of living was the family home. It was the illusion of permanence, of the one stable self. But The Cost of Living is the story of an exchange, not a loss. Levy gives up her calm family home, and in return, she gets all the frantic outdoor transit of the world. She becomes a woman with leaves in her hair, a woman who is, as her neighbor puts it, busy busy busy. Like her teenage daughter, she's "crazed by life and crazed for life."

Levy would never tell another woman to live the way she does, or to live any one way at all. She's too sophisticated a feminist for that. Still, she wants us — the reader, the young scuba diver — to know that she's happy, that she's thriving in this new, uncharted life. Her work is, too. The last sentence of the book starts, "The writing you are reading now is made from the cost of living." For writing this good, the cost of living is plainly the right price to pay.