Accessibility links
'Chemistry Lessons' Has A Great Formula, But The Results Aren't There The science doesn't quite add up in Meredith Goldstein's debut novel about a young scientist who's continuing her late mother's work on pheromones — in an attempt to win back her ex-boyfriend. 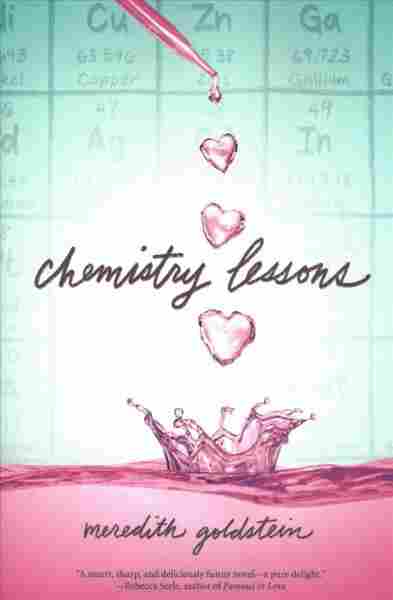 I may be a writer and performer now, but I graduated from USC with a degree in chemistry — so when Meredith Goldstein's Chemistry Lessons popped up on my radar, I was immediately intrigued. Finally! A super nerdy female main character I can connect with! And a plot with a romantic twist? Fun! Sign me up!

Seventeen-year-old Maya Leschinsky is interning at MIT the summer before her freshman year there. (MIT's respectable enough — I toured the campus with my family back in the day — but Dad's a Georgia Tech alum. He never would have actually let me apply there.) Maya lives with her athletic, mostly-absent father, Kirk. She works at the same lab as her recently-departed mother, and she has a couple of friends there — Yael and Kyle — which is good, because her boyfriend Whit breaks up with her as the book opens.

We chem nerds are used to seeing formulas everywhere, and from the get-go, this book seemed like it had all the right ingredients. Misfit teen, absent dad, dead mom, quirky friends, jerky ex the main character is hung up on — check. Now, if only there were a super fabulous gay best friend and a mysterious inheritance ... oh, look, there they are! Wonderful!

See, Maya's mother had been working on a secret project in the lab, and on her deathbed, Dr. Leschinsky left all of her project notes to Maya. But Maya and her father decide to leave them in the attic, unread despite the desperate pleas of Dr. Leschinsky's former assistant to be allowed to continue the work. Baffling, but not enough so to stop me reading. Instead, it's an offhand remark dropped at the right time by Maya's aunt that sets our main character's gears in motion.

Sweet And Hot, 'The Kiss Quotient' Really Adds Up

Maya digs out her mother's journal and discovers the nature of the secret project: concocting a DNA-specific pheromone-based serum that — hypothetically — will trigger romantic love between two people.

So what does Maya do? She brings the notebook straight to Dr. Leschinsky's former assistant. And then she convinces the assistant (now suddenly reluctant) to start the experiment up again ... using Maya as the (completely inappropriate) test subject. They make a plan to concoct the serum from stolen lab materials and try it on three boys: a friend, a stranger, and Maya's ex-boyfriend.

Oh yes, Maya's going to try to get her ex-boyfriend back! You know this won't play out the way she wants it to, because that's how stories like this usually go. But the fact that all this is about to go down with no one's consent — not Dad, nor any of the guys in question — started to make me uncomfortable.

And I anticipated some flexibility with the scientific method after reading the premise, but — completely setting aside the absent father and questionable ethics of the lab assistant — Maya wearing the same sort of dress and downplaying her cosmetics at every meeting isn't anything remotely resembling a scientific control. If I'd been watching a film, and the dress shown onscreen symbolized the countless other variables that had been considered to create a control against which their results are reviewed, I might have bought that. But the moment Maya takes a Benadryl to counteract what she thinks is a potentially harmful allergic reaction, and still goes through with her "experiment," well, shoot. Heisenberg himself wouldn't have touched that uncertainty with a ten-foot pole. And Maya's overthinking of every situation didn't help — while it rang true to her character, it also contributed to a narrative atmosphere already rife with distance and distrust.

... this novel had all the elements of a great formula! Yet somehow, the reaction it produced missed the mark.

The saving grace of the book is Bryan, the actor best friend. When Maya isn't in the lab, she's spending time in Bryan's superfabulous dramatic world, with his Junior Barder acting troupe, Shakespeare, breakup playlists, and karaoke. In addition to science, I am totally down with Shakespeare, popular music, and YouTube celebrities, so this novel had all the elements of a great formula! Yet somehow, the reaction it produced missed the mark.

I really wanted to connect with Chemistry Lessons. It's an exceptionally clever idea at heart, and it would probably make a great film premise. Film audiences tend to be a lot more forgiving when certain processes in the formula aren't explained, but as a scientifically-minded supernerd, I had difficulty.

If you are not of the scientifically-minded supernerd persuasion, this might very well be the book for you. There are definitely jumping-off points for discussions on women in STEM, ethics in science, and proper scientific procedures. The formula looked good — but I wish the book hadn't felt so formulaic in its execution. It just wasn't the sort of Chemistry I was looking for.