Accessibility links
Russian 'Reset 2.0': What Putin Wants From Trump At Helsinki Summit Russia's president wants to normalize ties with the U.S., stop sanctions and give President Trump the impression he is the only Western leader who can get through to him. 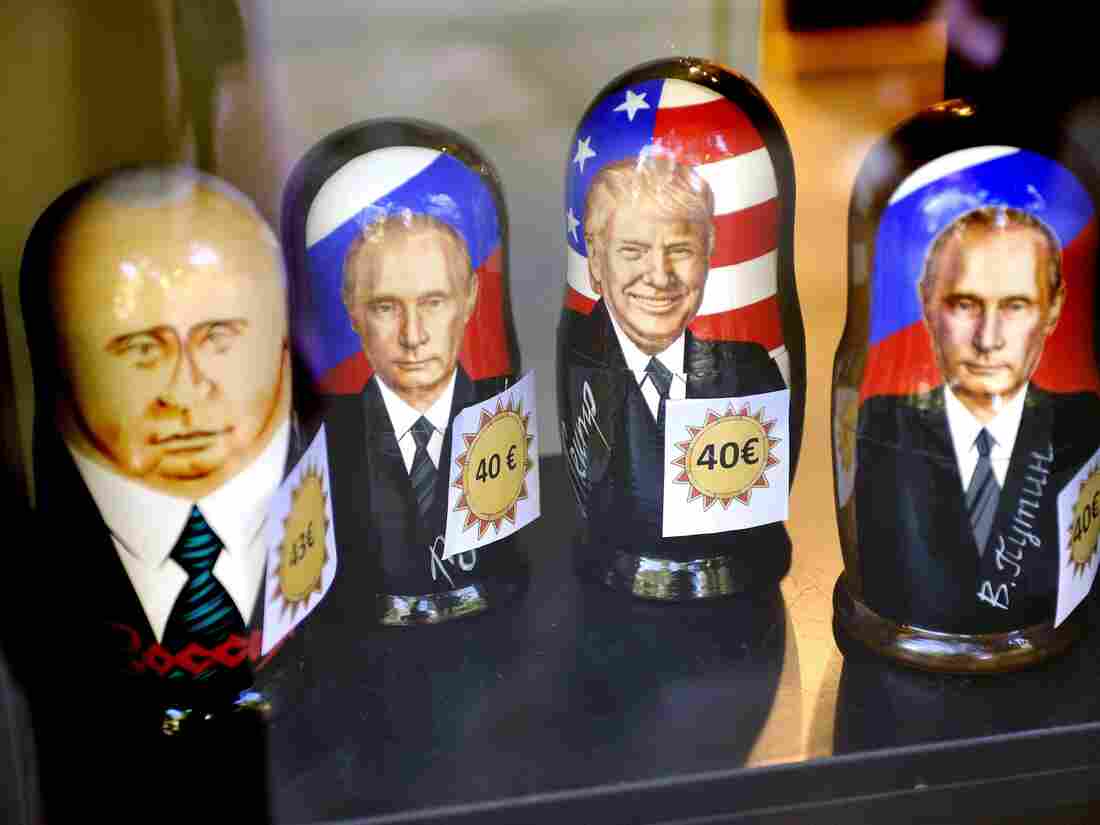 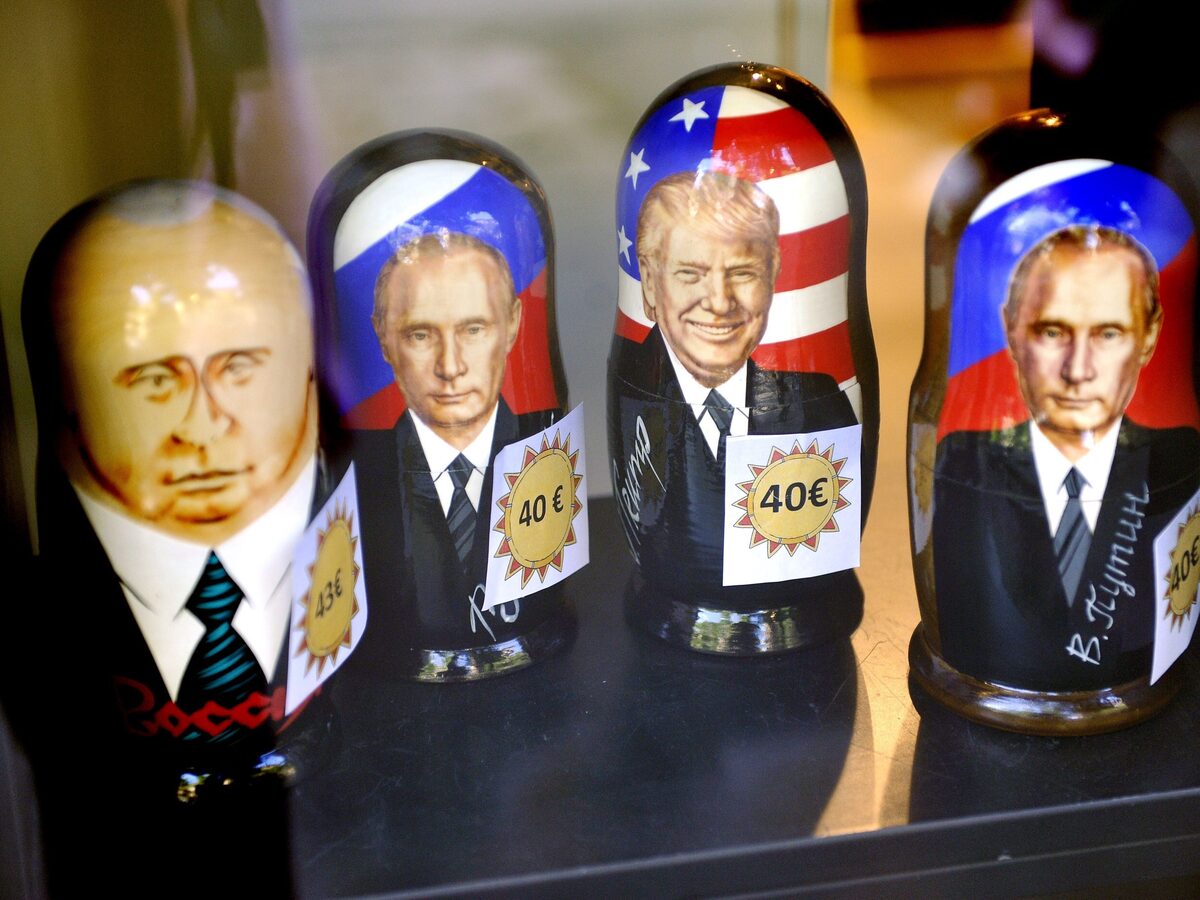 Russian matryoshka dolls depicting Russian President Vladimir Putin and U.S. President Trump are on sale in the Ruslania book store in Helsinki. Putin and Trump are scheduled to meet on Monday.

At last, Donald Trump will get the chance to meet with Vladimir Putin at the formal summit both men have been seeking for months.

After watching as President Trump held one-on-one talks with leaders from around the world — even North Korea — the Russian president will finally have his American counterpart's undivided attention when they meet on Monday in the Finnish capital Helsinki.

In the United States, the curious magnetism between the two presidents has fueled speculation about Trump's open admiration for Putin.

Special counsel Robert Mueller's indictment of 12 Russian intelligence officers for interfering in the 2016 election on Friday would appear to raise the stakes for Trump. But the U.S. president has said he hopes to become Putin's "friend" and predicted the summit with "Putin may be the easiest" meeting of a Europe trip in which he has lambasted NATO allies in Brussels and faced open hostility in London.

In Russia, the budding relationship is viewed with cautious optimism as a chance to reboot relations after Putin's military intervention in Ukraine in 2014 set off cascading U.S. economic sanctions. Accusations of Russian interference in the election — which the Kremlin categorically denies — made it politically fraught for Trump to plan a full-fledged summit any earlier. Over the past year, the two leaders have met briefly twice on the sidelines of multilateral gatherings.

"The number one priority for Putin is to establish communication with Trump. He certainly wants to understand how, and whether, it's possible to deal with him," said Fyodor Lukyanov, the editor of the journal Russia in Global Affairs. "From the Russian point of view, the absence of such communication is abnormal — insane — when two nuclear superpowers don't talk to each other and the channels of diplomacy are replaced by shouting on social media."

Who wants the summit more is hard to tell. Trump invited Putin to the White House in March, when he congratulated the Russian president on his re-election to a fourth term. That proposal faded into the background after Trump ordered a missile strike on Russia's allies in Syria and then held an even more unexpected meeting with North Korean leader Kim Jong Un.

A June visit to the Kremlin by U.S. national security adviser John Bolton — who a year ago accused Putin of lying to Trump about election interference — fixed the time and place of the summit; a week later a Republican congressional delegation to Moscow renewed ties to Russian lawmakers that had been cut since Russia's annexation of Crimea.

A report on Russian state television said that, at their last encounter in Vietnam in November, the U.S. president had initially wanted to hold an in-depth discussion with Putin but was "scared out of it" by his own advisers; now in Finland Trump is due to get a closed-door meeting without aides.

Speaking on a talk show on state TV, pro-Kremlin legislator Vyacheslav Nikonov, attributed Trump's success in pushing ahead with the summit to his rising approval ratings at home, especially among Republicans. "Of course after his meeting with Kim Jong Un, Trump can allow himself anything," Nikonov said to applause.

The consensus view in Moscow is that the summit itself is an accomplishment, given how low U.S.-Russian relations have sunk since President Obama launched his ill-fated "reset" with the Kremlin in 2009.

"Scoring this reset 2.0 is hugely important since it validates Putin's strategy of staring down the U.S. with zero concessions on policy and no change in Russian posture," said Vladimir Frolov, a political analyst in Moscow. "This will implicitly consolidate his geopolitical gains since 2014."

Scoring this reset 2.0 is hugely important since it validates Putin's strategy of staring down the U.S. with zero concessions on policy and no change in Russian posture.

Four years ago, Putin occupied and seized Crimea from Ukraine, then backed an armed uprising in the eastern part of the country that continues to today. In 2015, Putin deployed the Russian air force to Syria to prop up the regime in Damascus, transforming himself from international pariah because of the Crimea annexation to a Middle East power broker with direct lines to the leaders of Israel, Iran, Turkey and Saudi Arabia.

In Helsinki, Putin's first objective is to normalize relations with the United States and put the brakes on any new sanctions, Frolov said. A second goal is to give Trump the impression that he is the only Western leader who can get through to Putin.

"The more Trump buys into this narrative that getting along with Russia is a good thing, the more he will be under pressure to offer Moscow concessions to maintain the illusion of his triumph in his personal diplomacy with Putin — just like Kim is now milking Trump for all it's worth," Frolov said.

When the two leaders sit down in Helsinki, it will hardly be a meeting of equals, said Alexander Gabuev, a senior fellow at the Carnegie Center Moscow.

"Putin is a very skilled negotiator; he controls himself and has depth on many issues that Trump doesn't. So in this regard I think he definitely plays in a different league," said Gabuev. "The problem is that the U.S. is still a very powerful animal in international relations and has much more bargaining power than Russia."

In Moscow, Trump's trade wars and tirades against allies are being received with a mix of schadenfreude and trepidation, since any promises he makes to Putin may be subject to the same whimsical implementation — and fierce opposition by the U.S. president's political foes.

Russian observers agree that the best outcome for Putin is a resumption of dialogue. There are no expectations of breakthroughs on either side, though basic common interests such as preventing a nuclear war or avoiding inadvertent clashes in Syria — where U.S. and Russian troops support opposing sides — are likely to be packaged as results out of Helsinki.

"Syria might be a headline because Trump wants it," said Gabuev, referring to reports that the U.S. and Israel are urging Russia to curb Iran's military presence in southern Syria. "I don't know who planted the idea in his brain that you can talk to the Russians and they push the Iranians out."

Iran has fought alongside Russia on behalf of Syrian leader Bashar Assad, but the extent of Moscow's direct influence on Tehran is questionable. On Wednesday, Israeli Prime Minister Benjamin Netanyahu personally took his case to Putin, who later also received an envoy from Iran's supreme leader, Ayatollah Ali Khamenei.

Any way forward in U.S.-Russia relations cannot get around the subject of election interference, which the latest indictments of 12 Russians bring back to the forefront. While Putin initially brushed aside the accusations as part of a domestic political struggle inside the U.S., the Kremlin now appreciates how important the issue is in Washington, said foreign policy expert Lukyanov.

"Even if we assume that it happened and Russia was responsible — which very few people here believe — what do we do?" he said. "Acknowledge it and say, 'Yes, we did it, but we will not do it anymore?' It's unviable politically, it's not possible."

Trump says he will "firmly" ask Putin about election interference during the Helsinki summit.

Putin's challenge will be to come up with an answer that the U.S. president can take back home.