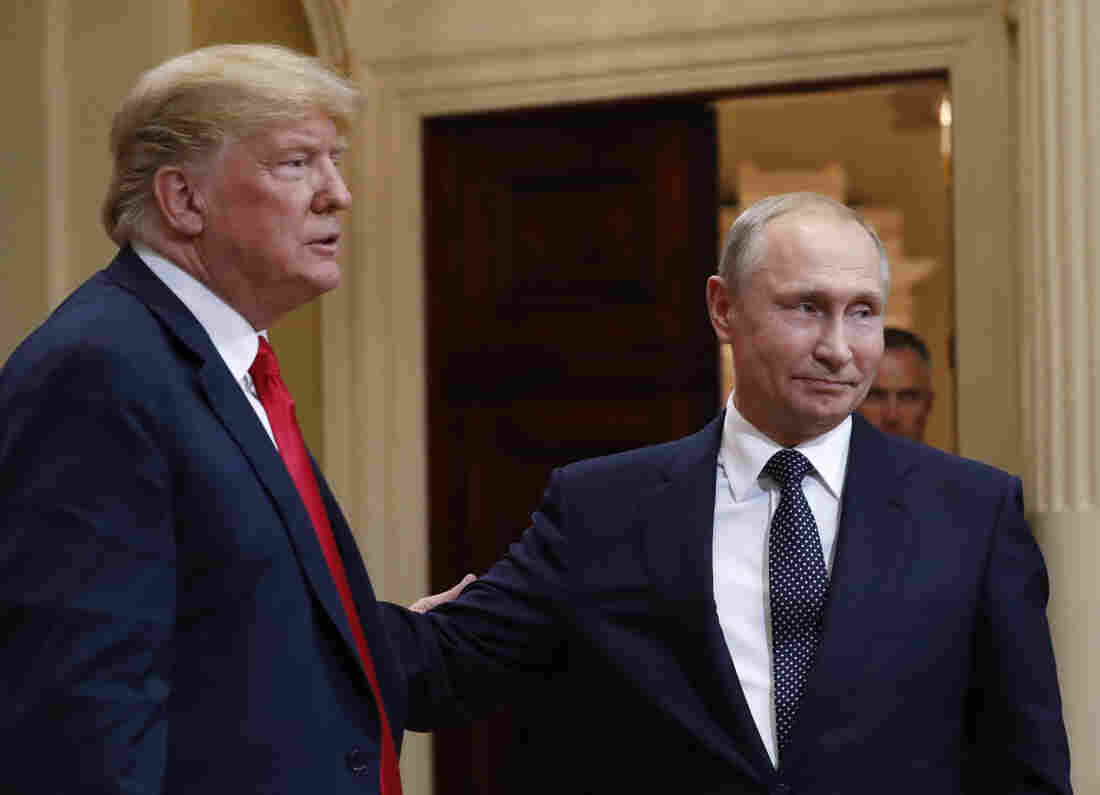 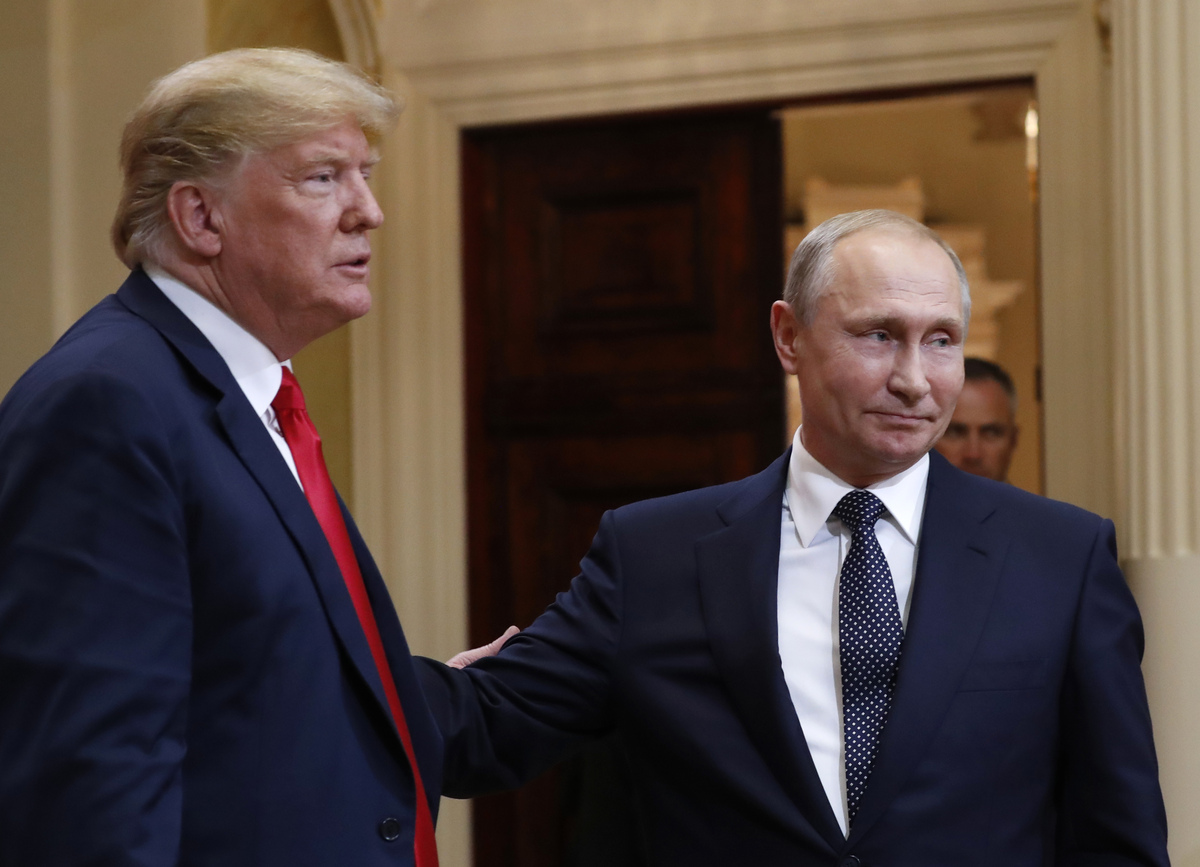 President Trump, left, and Russian President Vladimir Putin leave a press conference after their meeting Monday in Helsinki. Trump sided against his intelligence officials, who have said Russia interfered in the 2016 election.

President Trump's effort to reset relations with Russia backfired at home after he failed to side with the U.S. intelligence community over Moscow's interference in the 2016 election. The president's equivocation drew bipartisan condemnation, capping a week in which Trump alienated allies and cozied up to adversaries.

Trump himself declared his meeting with Russian President Vladimir Putin on Monday in Helsinki a success, in what he called the "proud tradition of bold American diplomacy."

The president said he pressed Putin about Moscow's interference in the election, but he appeared to take Putin's denial at face value, just days after a grand jury indicted 12 Russian intelligence agents on election-related charges.

U.S. intelligence officials are in agreement that Russia interfered in the 2016 election using a wide array of methods, including but not limited to hacking the Democratic National Committee's emails, breaking into American voting infrastructure and launching a sprawling misinformation campaign.

But asked directly whether he believed that assessment, Trump was noncommittal.

"I have great confidence in my intelligence people. But I will tell you that President Putin was extremely strong and powerful in his denial today," Trump said. "Dan Coats [the director of national intelligence] came to me and some others, they said they think it's Russia. I have President Putin. He just said it's not Russia. I will say this: I don't see any reason why it would be."

Lawmakers from both parties expressed no such doubts, and some were scathing in their criticism of the president.

"Today's press conference in Helsinki was one of the most disgraceful performances by an American president in memory," said Sen. John McCain, R-Ariz., chairman of the Senate Armed Services Committee. "The damage inflicted by President Trump's naiveté, egotism, false equivalence and sympathy for autocrats is difficult to calculate. But it is clear that the summit in Helsinki was a tragic mistake." 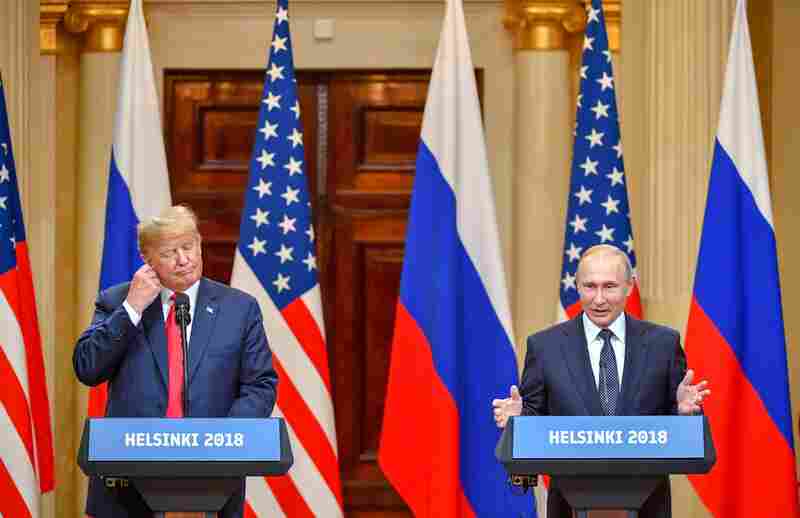 Presidents Trump and Vladimir Putin hold a joint news conference after a meeting at the Presidential Palace in Helsinki on Monday. Yuri Kadobnov/AFP/Getty Images hide caption 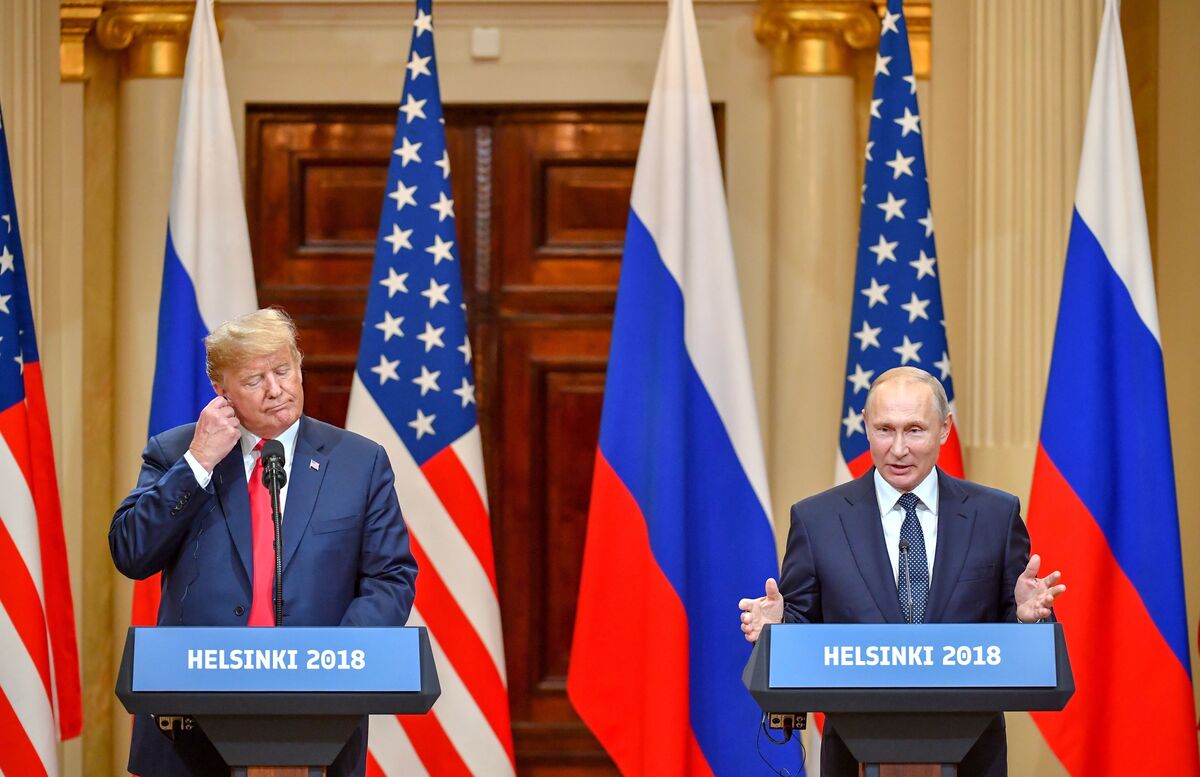 Presidents Trump and Vladimir Putin hold a joint news conference after a meeting at the Presidential Palace in Helsinki on Monday.

"The president must appreciate that Russia is not our ally," Ryan said. "There is no moral equivalence between the United States and Russia, which remains hostile to our most basic values and ideals. The United States must be focused on holding Russia accountable and putting an end to its vile attacks on democracy."

After last week's indictments, congressional Democrats had urged Trump to cancel the summit with Putin or at least not to meet privately with the Russian leader with no advisers present. Trump ignored those warnings. His one-on-one meeting with Putin lasted almost two hours.

"For the president to side with Putin over his own intelligence officials and blame the United States for Russia's attack on our democracy is a complete disgrace," said Sen. Mark Warner of Virginia, the top Democrat on the Senate intelligence committee.

Democrats also wondered aloud whether Russia has some sort of compromising information, or kompromat, on Trump that would allow Putin to control the relationship.

Putin dismissed the idea during a post-summit news conference, though he did not explicitly deny it.

"Please disregard this issue and don't think about it again," Putin said.

Trump quickly added, "If they had it, it would've been out by now."

Later in an interview with Fox News's Chris Wallace, Putin said "we don't have anything on [Trump]."

Hours after the summit had ended, Trump responded to some of the criticism with a tweet from Air Force One saying, "As I said today and many times before, 'I have GREAT confidence in MY intelligence people.' However, I also recognize that in order to build a brighter future, we cannot exclusively focus on the past – as the world's two largest nuclear powers, we must get along!"

As I said today and many times before, “I have GREAT confidence in MY intelligence people.” However, I also recognize that in order to build a brighter future, we cannot exclusively focus on the past – as the world’s two largest nuclear powers, we must get along! #HELSINKI2018

The meeting in Finland was the first stand-alone summit between the two leaders. They met previously on the sidelines of international gatherings in Germany and Vietnam.

Trump said that in addition to the 2016 election, they discussed North Korea, Iran, nuclear proliferation and terrorism.

"I really think the world wants to see us get along," Trump said at the meeting's outset. "I think we have great opportunities together as two countries that frankly we have not been getting along very well for the last number of years."

In a tweet before the meeting, Trump blamed "U.S. foolishness and stupidity" for strained relations, ignoring Russia's illegal annexation of Crimea, the poisoning of an ex-Russian spy in the United Kingdom and Russian interference in the U.S. presidential race.

Conciliatory with Russia, combative with NATO and EU

Trump's conciliatory tone toward Putin is a stark contrast to his combative attitude at last week's NATO summit, highlighting once again the president's transactional approach to foreign policy. In a CBS interview over the weekend, Trump drew little distinction between Western democracies that share history and values with the United States and authoritarian regimes in Moscow and Beijing.

"I think we have a lot of foes. I think the European Union is a foe, what they do to us in trade," Trump said. "Russia is foe in certain respects. China is a foe economically, certainly they are a foe. But that doesn't mean they are bad. It doesn't mean anything. It means that they are competitive." 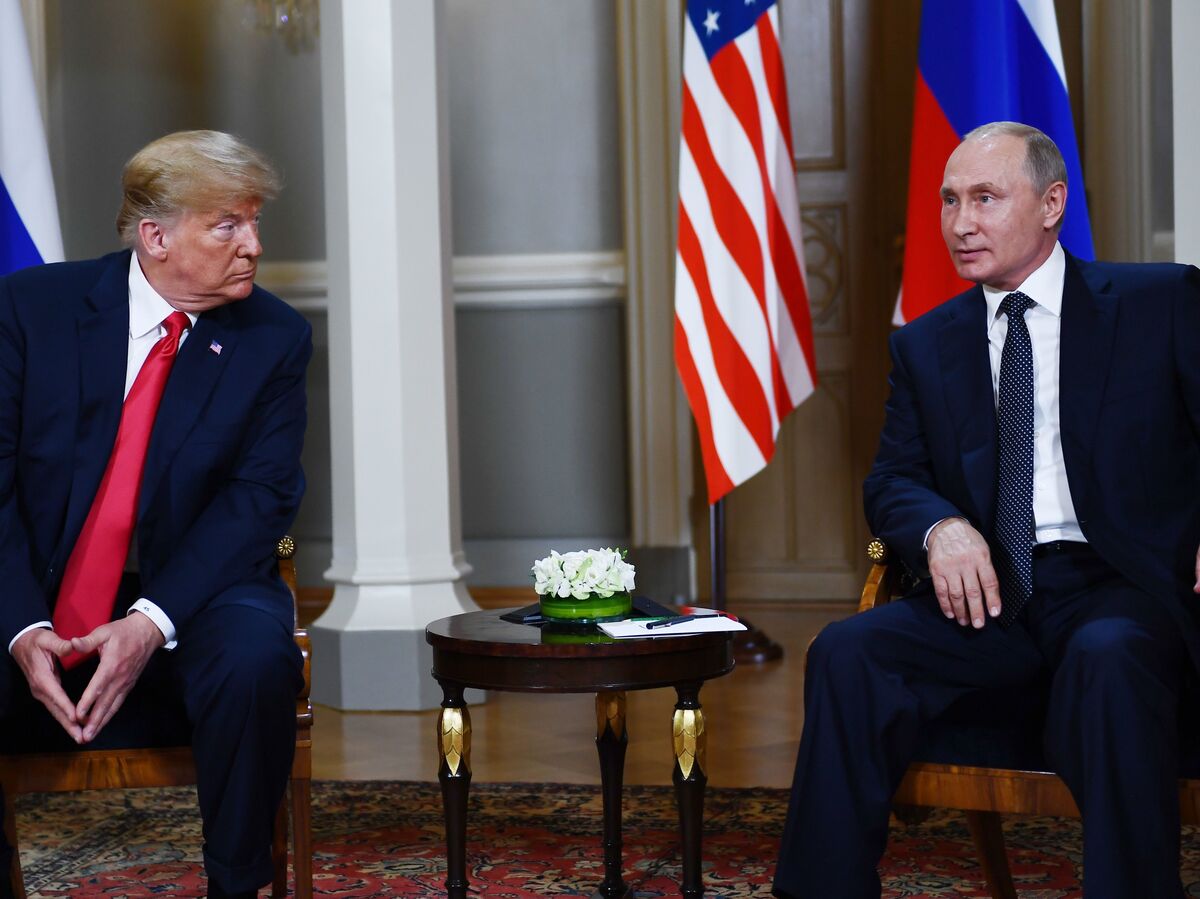 Russian President Vladimir Putin and President Trump brought an air of congeniality to their one-on-one meeting, which lasted about two hours, and the subsequent news conference.

"Coming close on the heels of President Trump's bombastic and erratic conduct towards our closest friends and allies in Brussels and Britain, today's press conference marks a recent low point in the history of the American presidency," McCain said. "That the president was attended in Helsinki by a team of competent and patriotic advisers makes his blunders and capitulations all the more painful and inexplicable."

The president of the European Council, Donald Tusk, also rejected Trump's description of the EU as a "foe" of the United States.

"America and the EU are best friends," Tusk tweeted. "Whoever says we are foes is spreading fake news."

While Putin acknowledged Monday that he wanted Trump to win in 2016, Trump insists he hasn't done Moscow's bidding as president. He has pointed to his efforts to boost U.S. oil exports and increase military spending as measures that would not win any points with Putin.

Trump also expelled dozens of Russian diplomats earlier this year in response to the poisoning of a former Russian spy in the U.K. And he agreed to supply Ukraine with lethal weapons, a step that former President Barack Obama had resisted.

"I guarantee whoever is in Russia, they're saying, 'Oh, gee, do we wish that Trump was not the victor in that election,' " Trump said last week. "We have been far tougher on Russia than anybody."

At the same time, Trump has floated the idea of allowing Russia back into the G-7, making it the G-8 once again. Russia was suspended from the group in 2014 in response to its illegal annexation of Crimea.

It's not clear what if any agreements the leaders may have reached on Ukraine, Syria, or military exercises in the Baltic states — all issues Trump said he was willing to discuss with Putin.

Aides had warned before the meeting that it might not produce big "deliverables."

"You can't solve problems if you're not talking about them," said Jon Huntsman, the U.S. ambassador to Russia, in a briefing before the meeting. "The fact that we're having a summit at this level, at this time in history, is a deliverable in itself," he said.

After the summit, Huntsman's daughter Abby — a Fox News host — was less charitable about the president's diplomatic efforts.

"No negotiation is worth throwing your own people and country under the bus," she tweeted.