Accessibility links
'They Wanted To Kill Us All': Nicaragua Reels After Bloody Church Siege Human rights groups say nearly 300 people have died since demonstrations over a now-rescinded pension change in April. Protests turned deadly Friday as student protesters took refuge in a church.

'They Wanted To Kill Us All': Nicaragua Reels After Bloody Church Siege

'They Wanted To Kill Us All': Nicaragua Reels After Bloody Church Siege 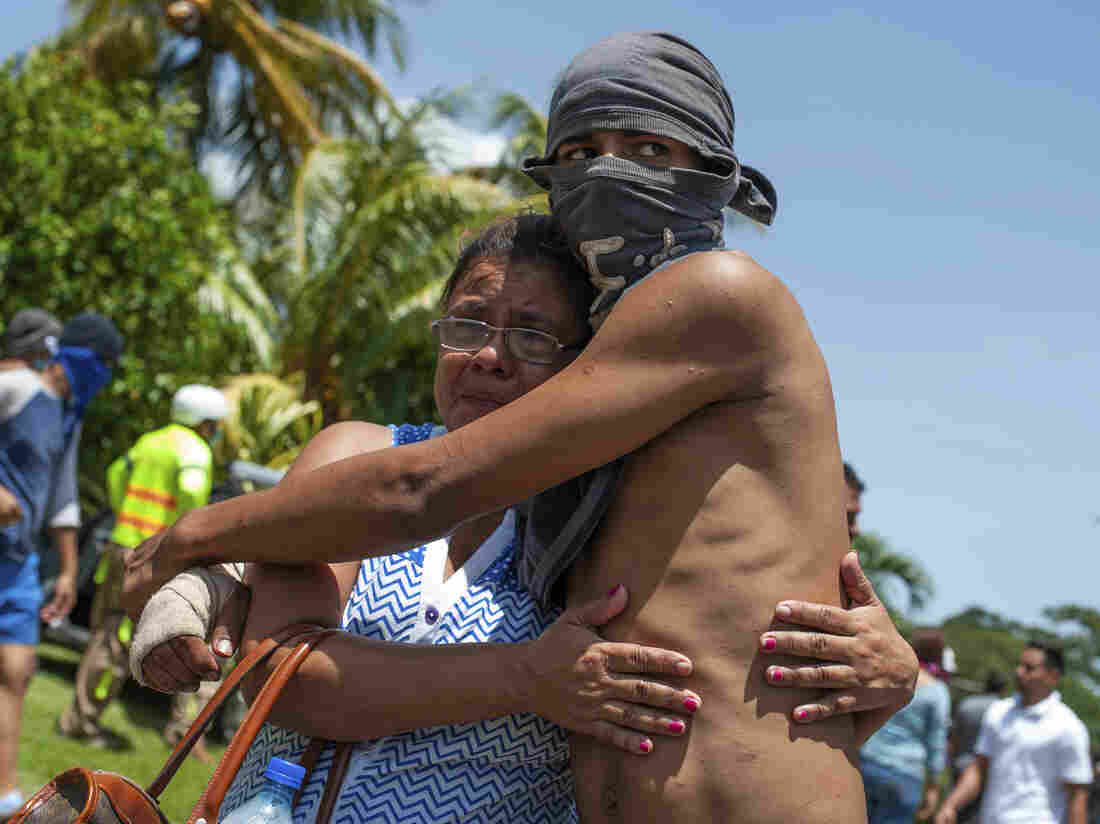 A student who had taken refuge at the Church of the Divine Mercy amid a barrage of armed attacks is embraced by a relative on Saturday after he was transported to the Managua Metropolitan Cathedral. Cristobal Venegas/AP hide caption 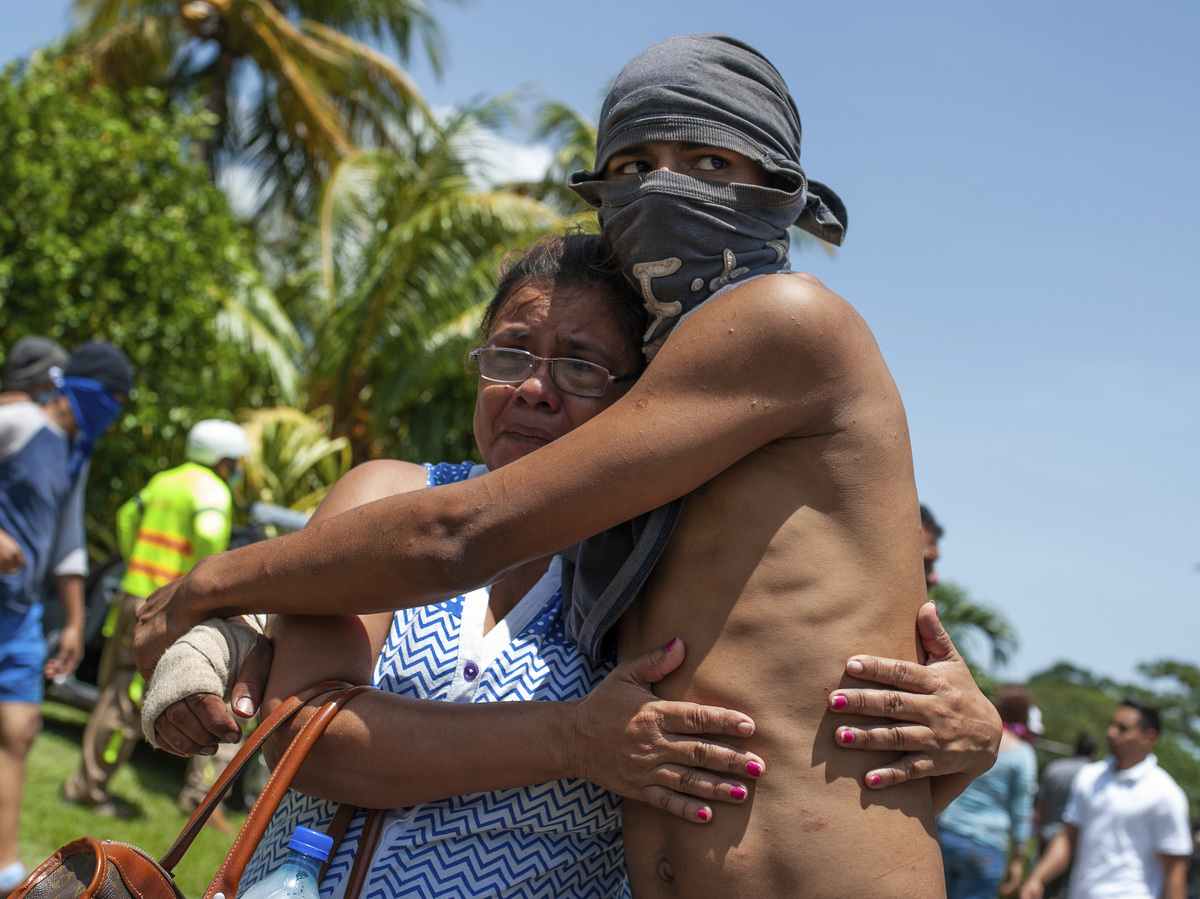 A student who had taken refuge at the Church of the Divine Mercy amid a barrage of armed attacks is embraced by a relative on Saturday after he was transported to the Managua Metropolitan Cathedral.

Nicaragua saw another weekend of deadly violence, as forces in support of President Daniel Ortega besieged student protesters in a church and attempted to assert control over several areas outside the capital.

Students have been at the center of anti-government demonstrations since they began April 18. What started as a "protest against now-rescinded changes in public pensions" became "a full-fledged call to end the authoritarian rule," reporter Maria Martin tells NPR. The government has responded with brutal force.

Overnight Friday, protests at the National Autonomous University of Nicaragua in the capital took a dramatic turn, ultimately leaving at least two people dead and several others injured.

After Nationwide Strike, Nicaragua Looks No Closer To Bloodshed's End

For two months, students at the university in Managua have set up barricades during protests that have drawn the wrath of pro-government forces. On Friday, about 200 students on the sprawling campus were pinned down by police and paramilitaries into a nearby Catholic church that they had been using as a field hospital.

The Washington Post's Joshua Partlow, reporting on the protests, was trapped in the Church of the Divine Mercy along with the students. He described what he saw:

"Not long after 6 p.m., with several high-pitched cracks, the mood took a dark turn. The faraway shooting was suddenly nearby. The paramilitaries had appeared, cutting off the only exit from Divine Mercy and firing at the remaining barricade just outside the church.

"It became clear that everyone inside — dozens of students, at least two priests and two doctors, neighbors, volunteers and journalists, including me — would not be going anywhere.

"Most of the students accepted this realization with stoicism and remarkable calm. Many had been taking sporadic fire on and off for the past two months, and they seemed accustomed to it. They carried the wounded into the Rev. Raul Zamora's rectory and put them on chairs or on the blood-spattered tile floor. Outside, at the barricade, other students shouted and fired their mortars against the unseen ­assailants.

"Over the next hours, the fighting ebbed and flowed. A flurry of gunfire would force everyone indoors, then people would drift into the courtyard. At times, they chanted 'Viva, Nicaragua,' shot their mortars in the air and vowed to never leave their posts. Around sunset, dozens of them knelt in a circle, held each other and prayed."

The siege stretched on for some 15 hours, ending when members of the clergy negotiated for the students to be allowed to leave. They were transported to the Managua Metropolitan Cathedral, according to the Post.

Roman Catholic Cardinal Leopoldo Brenes said two students were killed during the confrontation, according to The Associated Press. 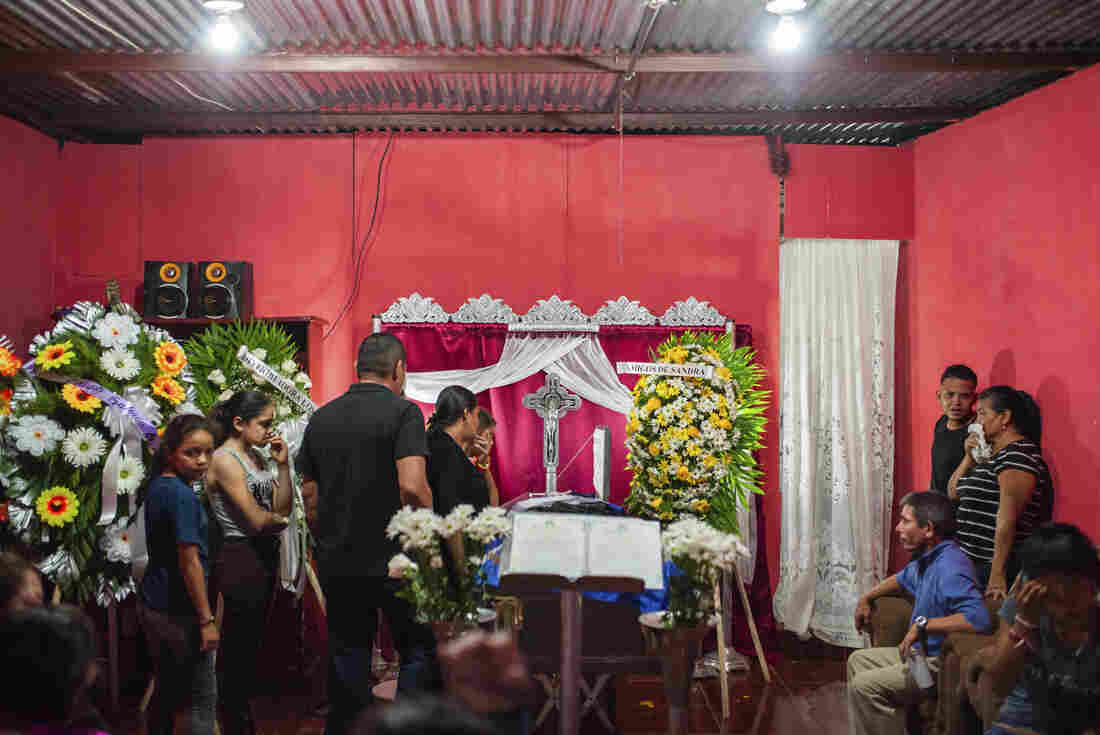 Mourners attend the wake of Nicaraguan university student Gerald Vasquez who was killed over the weekend when police forced students out of the National Autonomous University of Nicaragua in Managua. Cristobal Venegas/AP hide caption

"It was a really hard night. They discharged their entire heavy arsenal against stones and mortars," a sobbing young man who was afraid to given his name told the AP. "They wanted to kill us all."

Sunday saw more violence, just outside Managua, Reuters reported. The Nicaraguan Association for Human Rights said at least 10 people were killed when security forces and paramilitary groups loyal to Ortega attacked people in the city of Masaya and communities of Monimbo.

In Masaya, pro-government forces were trying to take down barricades and reassert control over the area in what the government was calling "Operation Clean-up," according to the BBC. The government says the "blockades are harming businesses and disrupting the lives of Nicaraguans," the broadcaster reports.

The weekend violence is part of a brutal crackdown that human rights groups say has resulted in the deaths of nearly 300 people.

Human rights groups have criticized the Nicaraguan government for its tactics. For example, the Inter-American Commission on Human Rights has accused the government of "excessive and arbitrary use of police force," as well as using paramilitary groups called "shock groups" to put down protests. It has called for the groups to be dismantled.

The BBC described "hooded and masked men opening fire on protesters" during recent protests, and says that "the government says the protesters are trying to stage a coup d'etat against Mr Ortega."