Accessibility links
Pussy Riot Members Arrested For Rushing World Cup Field In Moscow The activist and punk-music collective has taken responsibility for the four protesters who intruded on the tournament's final game. The four were transferred to district court on Monday. 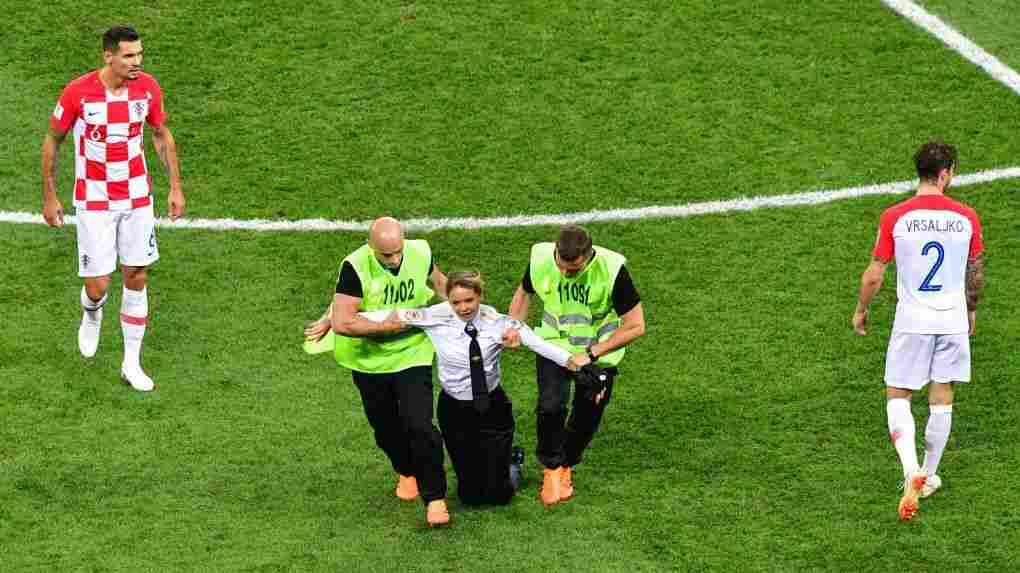 An intruder, identified as a member of the Russian collective and punk band Pussy Riot, is carried off the pitch during the 2018 World Cup final game between France and Croatia on Sunday. Mladen Antonov/AFP/Getty Images hide caption 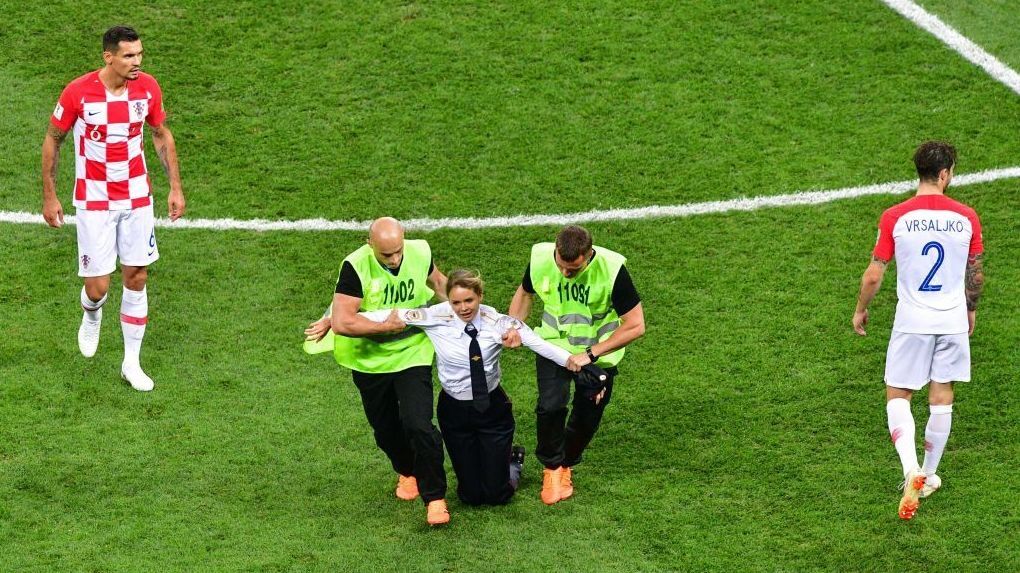 An intruder, identified as a member of the Russian collective and punk band Pussy Riot, is carried off the pitch during the 2018 World Cup final game between France and Croatia on Sunday.

Just after the second half of yesterday's World Cup final between France and Croatia had begun, four people dressed in Russian police uniforms briefly disrupted the game. On social media, Pussy Riot took responsibility for the protest.

The BBC identified the protesters — who were quickly chased by security and then carried off the pitch — as Nika Nikulshina, Olga Kurachyova, Olga Pakhtusova and Pyotr Verzilov.

According to Pussy Riot, Nikulshina was the first to be sentenced at Moscow's Khamovnichesky court, ordered to 15 days of "administrative arrest" and banned from attending sports events for three years. In a subsequent statement from its U.S. publicist, the group says Verzilov, Kurachyova and Pakhtusova received the same sentence, and claims that a lawyer for the four was denied access to them before the hearing.

The Russian news agency Interfax has reported that the four were being charged with "violation of spectators' rights" and the illegal wearing of law enforcement symbols.

The Khamovnichesky court is the same at which three Pussy Riot members — Maria Alyokhina, Yekaterina Samutsevich and Nadezhda Tolokonnikova — were convicted in August 2012 of hooliganism and sentenced to two years of penal labor for a "punk prayer" the group staged inside of Moscow's Cathedral of Christ the Savior in February 2012. (Alyokhina and Tolokonnikova served 22 months of their sentences for the cathedral protest; Samutsevich's sentence was suspended.) It is also the same court that tried the exiled businessman Mikhail Khodorkovsky, who wrote about his experience there around the time of the Pussy Riot trio's trial.

Verzilov, the man who allegedly rushed on the field yesterday, is Tolokonnikova's husband; like his wife, he was part of the political protest/performance art collective Voina ("War"), which led to the creation of Pussy Riot.

Pussy Riot listed several demands as part of its World Cup action, including the release of all political prisoners in Russia; not imprisoning people for social media "likes" and sharing; stopping "illegal" arrests during rallies; allowing political competition in the country; and "not fabricate accusations and not keep people in jails for no reason."

The group also noted that the World Cup final coincided with the eleventh death anniversary of the poet, artist, actor and musician Dimitri Prigov, whose poetic cycle about a Soviet policeman apparently inspired Sunday's Pussy Riot protest, which contrasted the idea of a "heavenly," morally just policeman with an "earthly" one.

Though social media featured both video and stills of the protest, American television viewers watching the game live missed much of the Pussy Riot action. "They're ruining the party," complained one of the American commentators on the Fox Sports network, which cut away from the field while the protesters were being carried off the pitch.

Also missed within the American broadcast: the superstar of this year's tournament, France's Kylian Mbappe, giving one of the female protesters a double high-five.