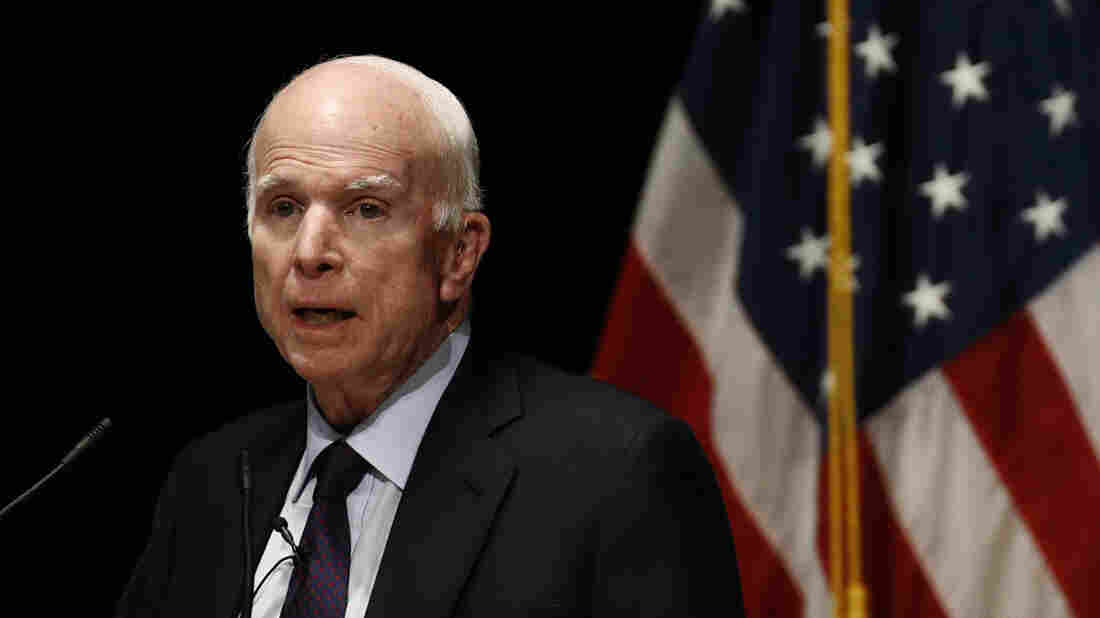 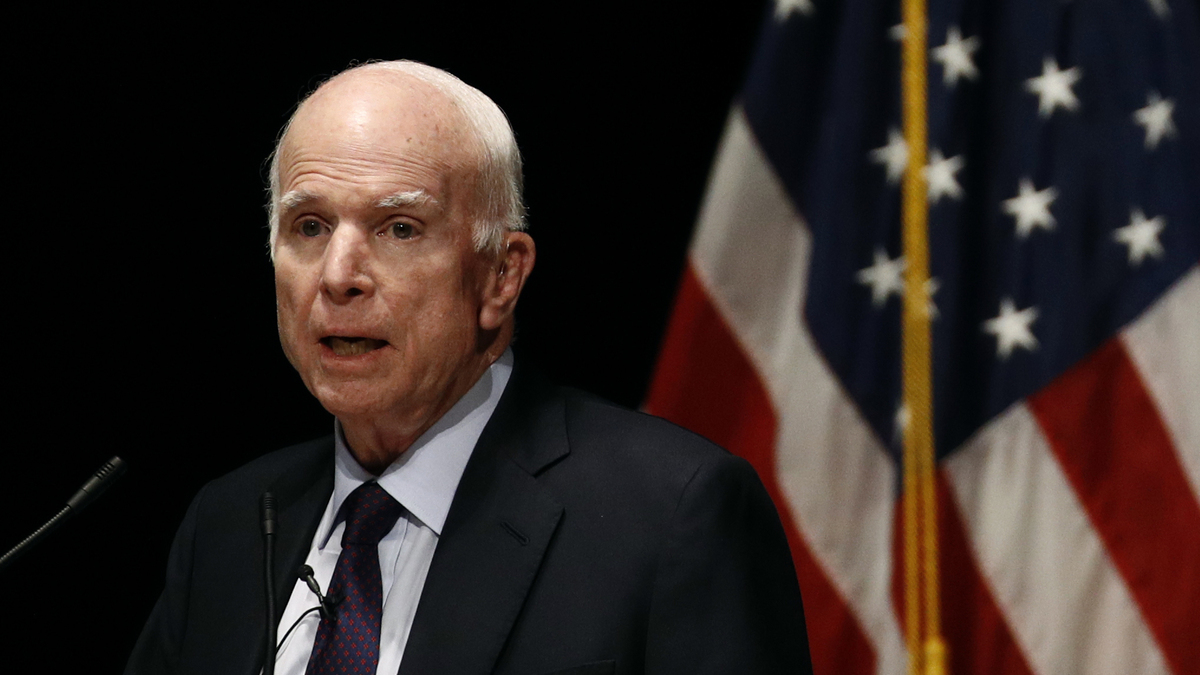 Sen. John McCain called President Trump's news conference with Russian President Vladimir Putin "one of the most disgraceful performances by an American president in memory."

Many Republicans harshly criticized President Trump's performance Monday at a news conference with Russian President Vladimir Putin, in which Trump said Putin's denial that Moscow interfered with the 2016 election is "strong and powerful" — despite U.S. intelligence findings to the contrary.

Meanwhile, Democratic leaders started to openly question whether the Russians have damaging information on the president after his joint appearance in which he deferred to Putin on the question of election interference and entertained joint cybersecurity efforts.

House Speaker Paul Ryan responded with a statement echoed by many senior Republican officials: "There is no question that Russia interfered in our election and continues attempts to undermine democracy here and around the world."

"The president must appreciate that Russia is not our ally. There is no moral equivalence between the United States and Russia, which remains hostile to our most basic values and ideals," Ryan, R-Wis., continued. "The United States must be focused on holding Russia accountable and putting an end to its vile attacks on democracy."

Senate Majority Leader Mitch McConnell, R-Ky., spoke to reporters as he entered the Capitol on Monday. "As I've said repeatedly, the Russians are not our friends and I entirely agree with the assessment of our intelligence community."

Senate Foreign Relations Committee Chairman Bob Corker, R-Tenn., was even more blunt, telling reporters on Capitol Hill that Trump's performance "made us look, as a nation, like a pushover. ... I did not think this was a good moment for our country."

The retiring Corker, who has been a frequent critic of the president, went on to say that Putin "gained a tremendous amount" from the Helsinki summit and Trump's kowtowing and that "I would guess [Putin's] having caviar right now" to celebrate.

Senate Armed Services Committee Chairman John McCain, R-Ariz., had the strongest GOP statement, bashing Trump in the immediate aftermath of the news conference. McCain called it "one of the most disgraceful performances by an American president in memory. The damage inflicted by President Trump's naiveté, egotism, false equivalence and sympathy for autocrats is difficult to calculate. But it is clear that the summit in Helsinki was a tragic mistake."

"No prior president has ever abased himself more abjectly before a tyrant," McCain continued. The Republicans' 2008 presidential nominee has been absent from the Senate as he undergoes treatment for brain cancer.

Sen. Lindsey Graham, R-S.C. — McCain's close friend who has become an unlikely Trump ally as of late — called the news conference a "missed opportunity" and said the president's performance will "create far more problems than it solves."

Missed opportunity by President Trump to firmly hold Russia accountable for 2016 meddling and deliver a strong warning regarding future elections.

This answer by President Trump will be seen by Russia as a sign of weakness and create far more problems than it solves. (1/3)

Graham also suggested that the soccer ball Putin gave Trump as a gift in the wake of the Russia's hosting of the World Cup could be a spy device.

Finally, if it were me, I’d check the soccer ball for listening devices and never allow it in the White House.

Sen. Orrin Hatch, R-Utah, who has been complimentary of Trump in the past, tweeted that Russian interference in the 2016 elections should be taken as fact based on U.S. intelligence community conclusions.

Hatch on the Trump/Putin summit in Helsinki:

“Russia interfered in the 2016 election. Our nation’s top intelligence agencies all agree on that point. From the President on down, we must do everything in our power to protect our democracy.." (1/3)

Other GOP senators, such as Sen. Ben Sasse, R-Neb., and retiring Sen. Jeff Flake, R-Ariz., who have been frequent Trump critics, also spoke out.

Sasse called Trump's claim that "both countries [are] responsible" for the deterioration of the U.S.-Russia relationship "bizarre and flat-out wrong. The United States is not to blame. America wants a good relationship with the Russian people but Vladimir Putin and his thugs are responsible for Soviet-style aggression. When the president plays these moral equivalence games, he gives Putin a propaganda win he desperately needs."

I never thought I would see the day when our American President would stand on the stage with the Russian President and place blame on the United States for Russian aggression. This is shameful.

Flake also told reporters on Capitol Hill on Monday that he is working on a bipartisanship resolution to have Congress go on record in support of the FBI and the Department of Justice and hold Russia to account. It will also say Congress stands with its allies.

Flake said he watched the news conference as he was getting on a flight. "It was disbelief —really — it was disbelief. I couldn't believe we have a president who would put as much belief or more belief in a dictator, who has shown a demonstrated ability to lie, over our own intelligence services. It was just baffling."

Flake said he could introduce the resolution as early as tonight. He declined to identify the Senate Democrat who was working on the draft with him.

Ohio Republican Gov. John Kasich — who, like Flake, has mulled a 2020 primary challenge to Trump — said Trump was "wrong" in his comments and "was not in America's best interests."

"Putin's words should never be given equal weight of our own Director of National Intelligence. Putin is a KGB operative trying to undermine the West and supporting other murderous dictators. He cannot and should not be trusted. Other American leaders, in both parties, should speak with one voice and let the world know we are not on the side of Russia," Kasich said in a statement.

Mitt Romney, the 2012 Republican presidential nominee who is now running for Senate in Utah, said, "President Trump's decision to side with Putin over American intelligence agencies is disgraceful and detrimental to our democratic principles."

My statement on today's summit in Helsinki. pic.twitter.com/WSxFGDKMau

Rep. Will Hurd, R-Texas, a former CIA officer and one of the most vulnerable House Republicans up for re-election in 2018, tweeted that Trump had been manipulated by the Russian president, who had been an intelligence officer in the Soviet Union.

I've seen Russian intelligence manipulate many people over my professional career and I never would have thought that the US President would become one of the ones getting played by old KGB hands.

Former House Speaker Newt Gingrich, a Trump supporter whose wife Callista is now ambassador to the Vatican, called it "the most serious mistake of his presidency" and said Trump should immediately reverse course.

President Trump must clarify his statements in Helsinki on our intelligence system and Putin. It is the most serious mistake of his presidency and must be corrected—-immediately.

Senate Select Intelligence Committee Chairman Richard Burr, R-N.C., said in a statement that his committee "found no reason to doubt" the conclusion that "President Putin ordered an influence campaign aimed at the 2016 U.S. elections with the goal of undermining faith in our democratic process. ... Any statement by Vladimir Putin contrary to these facts is a lie and should be recognized as one by the President.

"Vladimir Putin is not our friend and never has been. Nor does he want to be our friend. His regime's actions prove it. We must make clear that the United States will not tolerate hostile Russian activities against us or our allies."

House Judiciary Committee Chairman Bob Goodlatte, R-Va., said in a statement that "U.S. intelligence agencies have confirmed Russia's actions, and the evidence is plentiful. Today's summit was an opportunity to forcefully address this growing threat directly with President Putin. I am dismayed that we did not see that."

Rep. Liz Cheney, R-Wyo., the daughter of former Vice President Dick Cheney, tweeted that she was "deeply troubled" by Trump's defense of Putin.

As a member of the House Armed Services Committee, I am deeply troubled by President Trump’s defense of Putin against the intelligence agencies of the U.S. & his suggestion of moral equivalence between the U.S. and Russia. Russia poses a grave threat to our national security.

Trump's own director of national intelligence, Dan Coats, contradicted the president's public comments in a statement after the news conference.

"We have been clear in our assessments of Russian meddling in the 2016 election and their ongoing pervasive efforts to undermine our democracy, and we will continue to provide unvarnished & objective intelligence in support of our national security," Coats said.

Fox News host Abby Huntsman, whose father Jon Huntsman is Trump's ambassador to Russia, tweeted that Trump had thrown the U.S. "under the bus."

No negotiation is worth throwing your own people and country under the bus.

GOP consultant John Weaver — who in the past worked for Huntsman, McCain and Kasich — tweeted that the Russian ambassador should step down after Trump's performance.

@JonHuntsman Resign, if you have any honor.

Former CIA Director John Brennan, who served under President Barack Obama, suggested that Trump's actions on Monday were "nothing short of treasonous."

Donald Trump’s press conference performance in Helsinki rises to & exceeds the threshold of “high crimes & misdemeanors.” It was nothing short of treasonous. Not only were Trump’s comments imbecilic, he is wholly in the pocket of Putin. Republican Patriots: Where are you???

Former FBI director James Comey, whose firing by Trump in part spurred the appointment of special counsel Robert Mueller to look into Russian interference in the 2016 election, wrote on Twitter that "patriots" should call out the president's behavior.

This was the day an American president stood on foreign soil next to a murderous lying thug and refused to back his own country. Patriots need to stand up and reject the behavior of this president.

Democrats were, of course, also harsh in their reaction to the president.

Senate Select Committee on Intelligence Vice Chairman Mark Warner, D-Va., said, "For the President of the United States to stand next to Vladimir Putin — who personally ordered one of the largest state-sponsored cyber-attacks in our history — and side with Putin over America's military and intelligence leaders is a breach of his duty to defend our country against its adversaries."

Warner concluded his statement by asking. "If the President cannot defend the United States and its interests in public, how can we trust him to stand up for our country in private?"

In a news conference, Senate Minority Leader Chuck Schumer, D-N.Y., suggested that Trump's bending to Putin was because the Russian government has some sort of compromising information on the U.S. president — something Putin was asked about by American journalists on Monday but dismissed without answering. Later in an interview with Fox News's Chris Wallace, Putin said he didn't have anything on Trump.

"He took the word of the KGB over the men and women of the CIA," Schumer said. "The President put what's best for him over what's best for the security and well-being of the United States."

Schumer said the power to check the president's relationship with Russia lies in the hands of congressional Republicans because they control both houses of Congress. He said he wanted his Republicans colleagues to ratchet up sanctions on Russia, demand that Trump's national security team testify before Congress about the content of the Helsinki summit, end their attacks on the DOJ and Mueller, and demand the extraditions of the Russians named in Friday's indictments.

House Minority Leader Nancy Pelosi, D-Calif., also suggested the Russian government may have some sort of damaging information, or "kompromat," on Trump.

Every single day, I find myself asking: what do the Russians have on @realDonaldTrump personally, financially, & politically? The answer to that question is that only thing that explains his behavior & his refusal to stand up to Putin. #ABetterDeal

NPR's Miles Parks and Deirdre Walsh contributed to this report.