Accessibility links
Opinion: U.S. And U.K. Remain United, Not Divided, By Their Common Language Linguist Geoff Nunberg says none of the differences between American and British English would be interesting if the nations didn't share a core vocabulary grown from a common literary tradition.

Geoff Nunberg (@GeoffNunberg) is a linguist who teaches at the School of Information at the University of California at Berkeley. 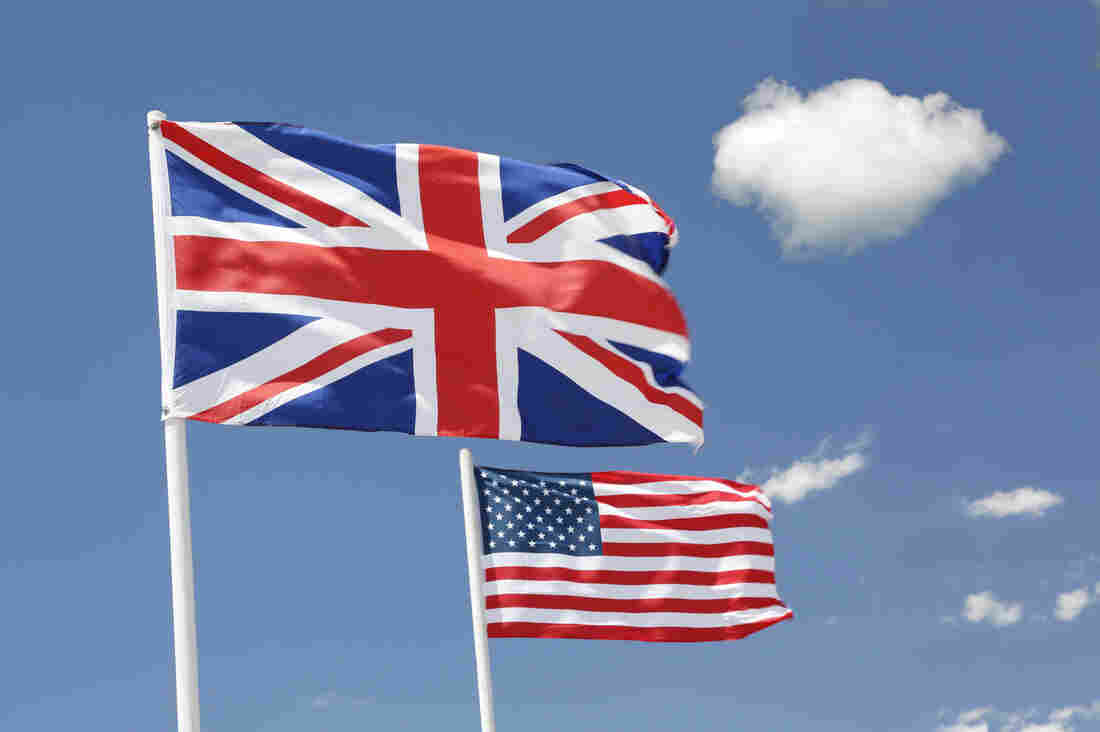 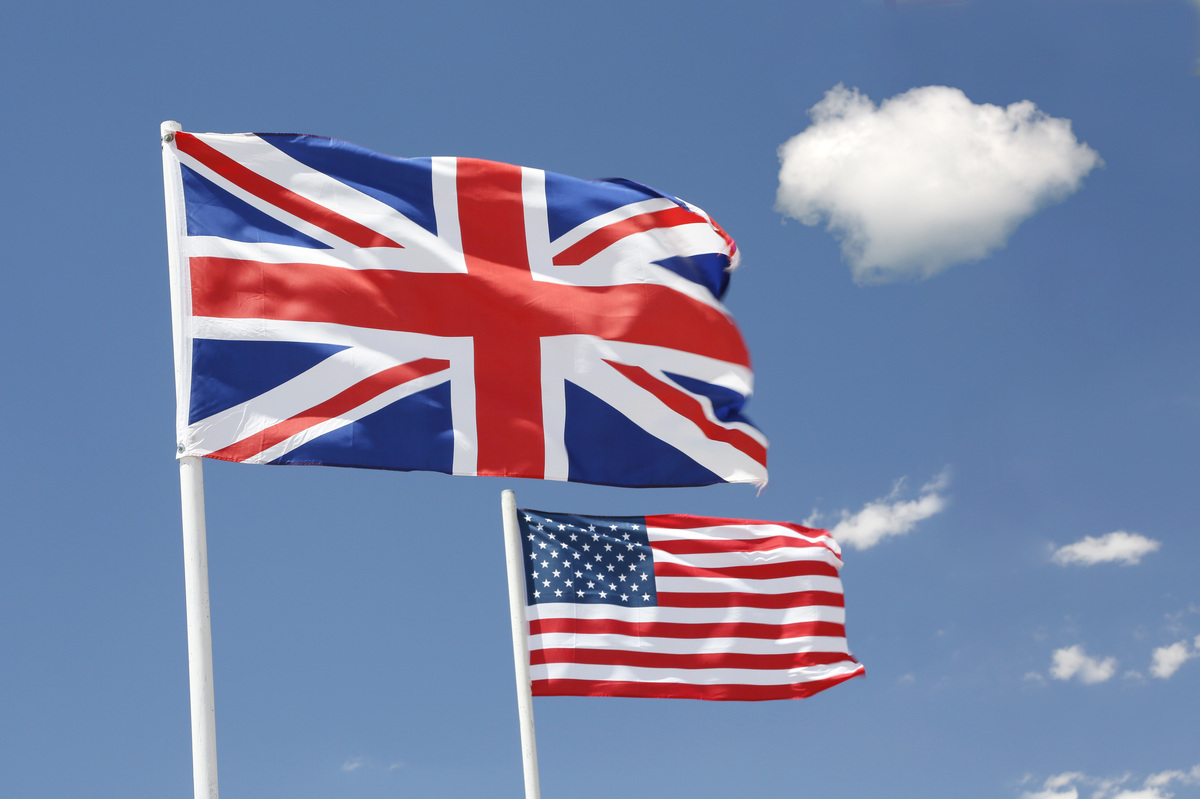 "Great Britain and the United States are two nations separated by a common language."

That's the stock witticism, but if you ask me, it gets things backwards. Great Britain and the U.S. are more like two nations united by a divided language — or more precisely, by their mutual obsession with their linguistic differences. For 200 years now, writers from each nation have been tirelessly picking over the language of the other, with a mix of amusement, condescension, derision and horror. 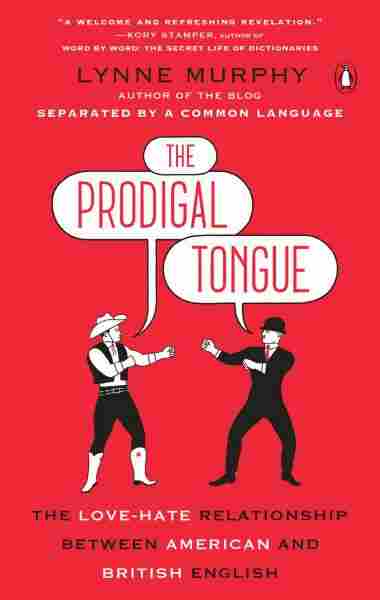 The Love-Hate Relationship Between British and American English

That fraught relationship is the subject of an engaging new book called The Prodigal Tongue. It's by Lynne Murphy, an American linguist based in England who keeps her eye on the way that their lot and our lot talk — and just as important, on what people make of the differences.

The book is subtitled The Love-Hate Relationship of British and American English, and there's plenty of each to go around. We tend to be indulgent of each other's linguistic quirks and foibles, but only as long as they remain exotically foreign. We Americans are charmed by quaint Mary Poppinsisms like "gobsmacked." The British admire what Virginia Woolf called our "expressive ugly vigorous slang" — she singled out "rambunctious" and "flip-flop."

But the cordiality wears thin when words emigrate to the other side of the proverbial pond and bring a wash of local insecurities bubbling to the surface. American Anglophilia has always been an aspirational vice. Time was when Harvard professors insisted that their students adopt the British broad "ah" sound in "class" and "half" as a sign of intellectual cultivation.

Nowadays, Britishisms usually enter American speech via members of the coastal smart set who reckon the words makes them sound trendy or posh. They describe their iPad as a "nice piece of kit" or say they get peckish around tea-time, and straight away the op-ed pages fill with alarms about "Anglocreep" and America's slippery slope into Britishisms.

Some of those items ultimately trickle out to the linguistic hinterland — whimsical words like "kerfuffle" and useful ones like "vetting" — and for that matter, "trendy," which is a legacy of Britain's swinging '60s. But in the end, modern British has contributed far fewer words to everyday American speech than Spanish has — think "loco" and "pronto," "macho" and "nachos," "mañana" and "nada."

The British have had a harder time of it. They've been feeling besieged by Americanisms since the era of the earliest talkies, when people took to using "OK" in place of "righto." The Beatles sang "She loves you, yeah, yeah, yeah," to the disappointment of Paul McCartney's father, who said he would have preferred a proper British "yes, yes, yes." Now the young people greet each other with, "Hi, guys" and use, "awesome," where their elders would have said, "marvelous."

'Let's Touch Base' On The Americanisms Brits Love To Hate

'Let's Touch Base' On The Americanisms Brits Love To Hate

The ubiquitous American media play some role in this. Murphy notes that British children "live part of their lives in a virtual America, home of hip hop [and] Disney princesses." But then Americans have been exposed to plenty of British popular culture without picking up much of its slang. The kids who grew up beguiled by the Harry Potter books and movies didn't come away from them saying, "We had a brilliant time," or calling each other "mate."

The young Britons who embrace "guys" and "awesome" are drawn by the same image of America as a classless society that led earlier generations to embrace blue jeans and rock 'n' roll. You might call them "yankophiles" or "Americophiles," except that British English has no such words.

When British critics rail about the infestation of Americanisms, they don't blame the speakers who adopt them but the insidious seductiveness of the expressions themselves. Those reactions often take the unhinged tone that Murphy dubs "Amerilexicosis": American English is "mindless," "ugly," "infectious, destructive and virulent." Prince Charles called it "very corrupting." 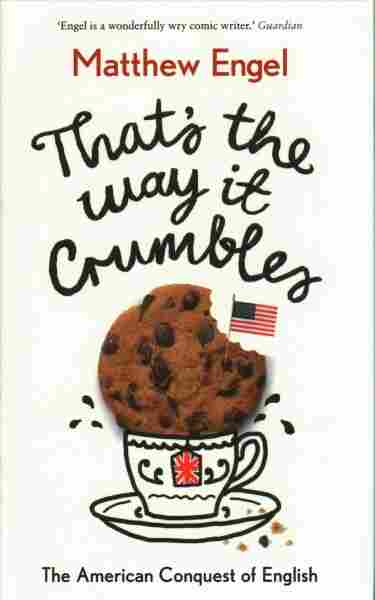 That's the Way It Crumbles

The American Conquest of the English Language

In his entertainingly splenetic 2017 book That's the Way It Crumbles, the British journalist Matthew Engel takes those fears of cultural displacement to their logical conclusion and predicts that by the year 2120, British English will be completely absorbed by Americanisms. By that time, presumably, Britain will be no more than a remote island outpost of American hegemony, like a damp and chilly Guam.

But notwithstanding the enticements of Disney and hip-hop there — or Masterpiece Theatre here — it's a safe bet the British and Americans will sound reassuringly foreign to each other for ages to come. As Murphy points out, the influx of Americanisms has left vast stretches of the British vocabulary untouched.

Future American visitors to the U.K. will be as baffled as ever when they shop for groceries or hardware, not to mention when the conversation turns to politics or sex. And even those borrowed words have a way of adapting to their new soil. The British borrowed "hot dog" from us, but use it for any sausage on a bun, just as we borrowed "cheers" from them, but don't use it for "thanks," just as a way of closing an email.

Anyway, none of those differences would be interesting if we didn't share a core vocabulary — not the words for vegetables or car parts, but the language that grows out of our common literary tradition. That's the heritage that enables us all to enjoy both Zadie Smith and Philip Roth, not to mention writers from the other nations who are part of the same conversation. We basically all expect to understand each other, which is why we find it so curious to realize that sometimes we don't.

Read an excerpt of The Prodigal Tongue