Accessibility links
'Silver' Spins Gold From The Moldiest Of Old Straw Naomi Novik's new reimagining of "Rumpelstiltskin" digs deep into the anti-Semitism of the original story and drags out a warm, solid story about the nature of debt, friendship and hospitality.

'Silver' Spins Gold From The Moldiest Of Old Straw

'Silver' Spins Gold From The Moldiest Of Old Straw 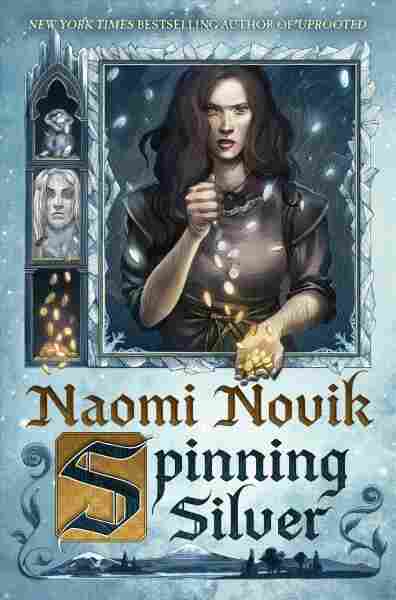 Naomi Novik's Spinning Silver is not a sequel to her 2015 novel Uprooted, though both are richly remade fairy tales set in fantastical versions of Eastern Europe with addictive voice work and characterization. It's a sophisticated development of her short story by the same title published in the 2016 anthology The Starlit Wood: New Fairy Tales — itself a brilliant reclamation of "Rumpelstiltskin," digging deep into that story's anti-Semitism and pulling up something nourishing from the roots. (Full disclosure: I, too, had a story in The Starlit Wood.)

In Lithvas — a country ruled by a Tsar and his dukes, and harried by gold-hungry fairy creatures called the Staryk — three young women struggle to make the most of their lives. Miryem is the Jewish daughter of a soft-hearted moneylender who would rather live in poverty than collect his debts; Wanda is the gentile daughter of an abusive alcoholic farmer; and Irina is the part-Staryk daughter of a disappointed duke scheming for the throne. As these women's paths cross during the most vicious winter in memory, they will learn from and teach each other all the shades and colors of debt and payment, gift and hospitality, responsibility and belonging.

Lately — unsurprisingly, given our present moment — I have been obsessed with books that think deeply about money and capitalism, that dig into the structures we take for granted. There's a mathematical magic at work in every version of this story: the number of retellings, the exponential development from folk tale to short story to novel, and finally the fractal nature of its every good quality. The friendships made me cry, the points of view were raw and sharp by turns; Wanda's in particular struck deep chords in me, as the woman who loves fiercest and hardest in exchange for the smallest kindnesses, as the most generous with her labour and outlook. There are so many mathemagicians in this book, be they moneylenders turning silver into gold or knitters and weavers working to a pattern. It's gold and silver all the way down.

There are so many mathemagicians in this book, be they moneylenders turning silver into gold or knitters working to a pattern. It's gold and silver all the way down.

Dumbfounding revelations about the nature of labor and debt, friendship and family curl within sentences like cats licking their paws, simple and pragmatic and mesmerizing at once. The way Novik explores money — as that which is owed to Miryem, taken from Wanda, given to Irina as armor — is by turns tender and careful, unflinching and sharp. The inversion Novik accomplished so beautifully in her original short story is pushed much farther here, explored through a web of moving relationships and intricate plots that culminate in one of the year's strongest fantasy novels.

Like Uprooted, the story sometimes overspills the bounds of its plot, and anyone who disliked the romance in that is unlikely to enjoy the romances in this. But like Uprooted, the main narrative engine is deep, loving friendships and alliances between women, taken several steps further here as they discuss and debate their circumstances, values, and loyalties. I didn't want it to end, and I could write gushing praise of it for much longer than I have here — about fairy tale fathers and fairy tale mothers, about how Miryem's Jewishness is the book's warm, glowing heart, about how interlaced it is with the plot's intrusive fairy magic, and about how fascinating is the book's twining of religion, capital, and enchantment.

But mostly I'm in awe of how Novik spins moldy, hateful straw into warm and glimmering gold.