Accessibility links
Maria Butina Case Bolsters Understanding of 'Infiltration' In Russian Attack The Justice Department has accused a Russian woman of trying to cultivate influence with American political figures via the NRA, affirming a separate plank of the Kremlin's influence campaign. 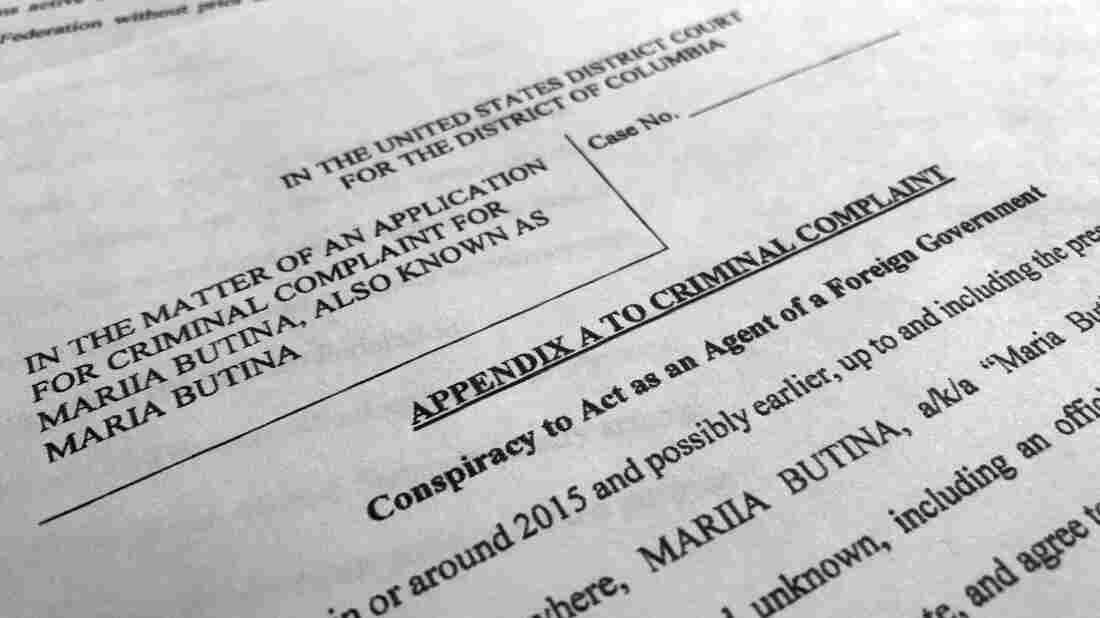 According to court papers unsealed Monday, Maria Butina was the intermediary between Russian government officials and Americans, both in the NRA and elsewhere in politics. Jon Elswick/AP hide caption 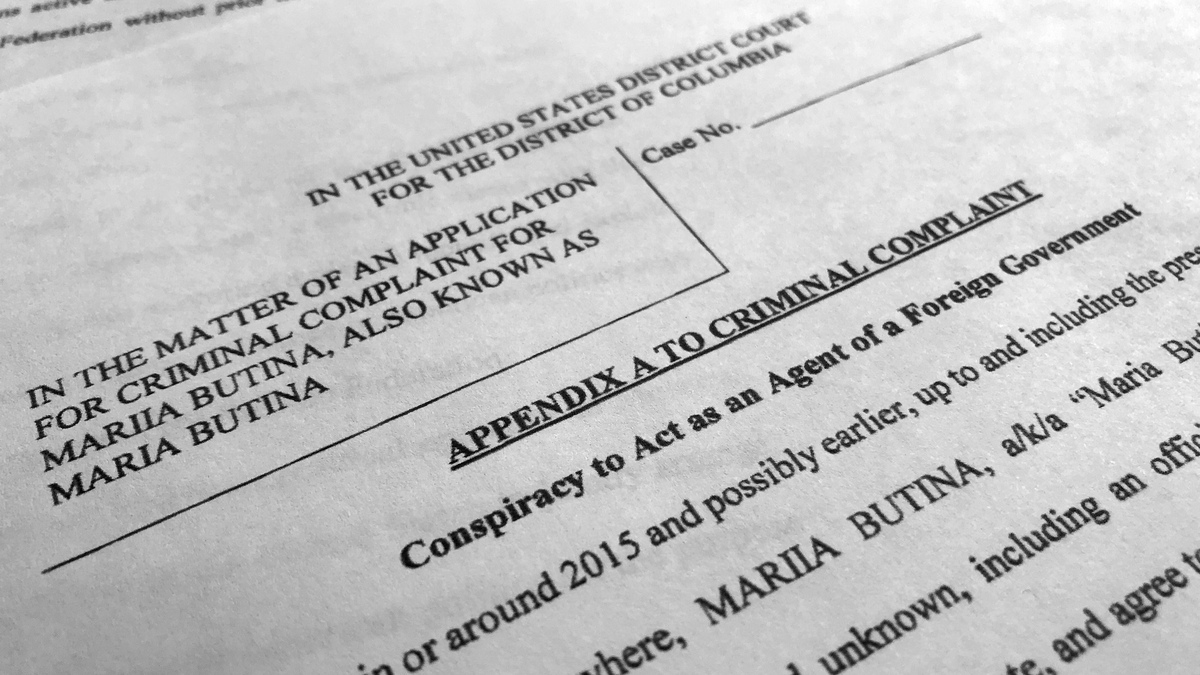 According to court papers unsealed Monday, Maria Butina was the intermediary between Russian government officials and Americans, both in the NRA and elsewhere in politics.

Charges accusing a woman of trying to build bridges between the Russian government and American political leaders via the National Rifle Association have delivered a breakthrough in understanding one aspect of the attack on the 2016 election: "infiltration."

After months of questions and speculation as to how or whether the NRA connection might have worked, prosecutors proffered an answer on Monday: The Russian woman, Maria Butina, was the intermediary between Russian government officials and Americans, both in the NRA and elsewhere in politics, according to court documents.

The government says she was acting as a foreign agent without registering. Her attorney called the charges overblown, as NPR's Carrie Johnson reported.

A grand jury in Washington D.C. returned an indictment against Butina on Tuesday afternoon.

Butina allegedly serves or served as the deputy to someone identified in court papers only as a "Russian official," who is probably Alexander Torshin, a now-sanctioned Kremlin official who cultivated relationships with American political leaders and the NRA over several years.

The two "took these steps in order to infiltrate these groups and advance the interests of the Russian Federation," FBI Special Agent Kevin Helson said in an affidavit that accompanied the criminal complaint.

The word "infiltration" has been one the least-understood lanes of the "active measures" waged by the Russians since before 2016 — along with others that included social media agitation, clandestine outreach by intelligence operatives and cyberattacks.

"Infiltration" first entered the lexicon of the Russia story in January, after the House intelligence committee released the transcript of its interview with Glenn Simpson, founder of the political intelligence company that commissioned the infamous Russia dossier.

According to Simpson, Russia's active measures sought to target not only the NRA but also "various conservative organizations, religious and otherwise."

The gun rights organization has acknowledged that it has a handful of overseas members but says that they gave only a negligible amount of money. More broadly, the NRA has said it hasn't done anything wrong, but it has not addressed its relationships with Butina and Torshin in detail.

The group has so far not offered any comment about the Butina charges.

Torshin was placed under sanction by the Treasury Department earlier this year and is barred from returning to the United States. Butina was arrested on Sunday, the Justice Department said. 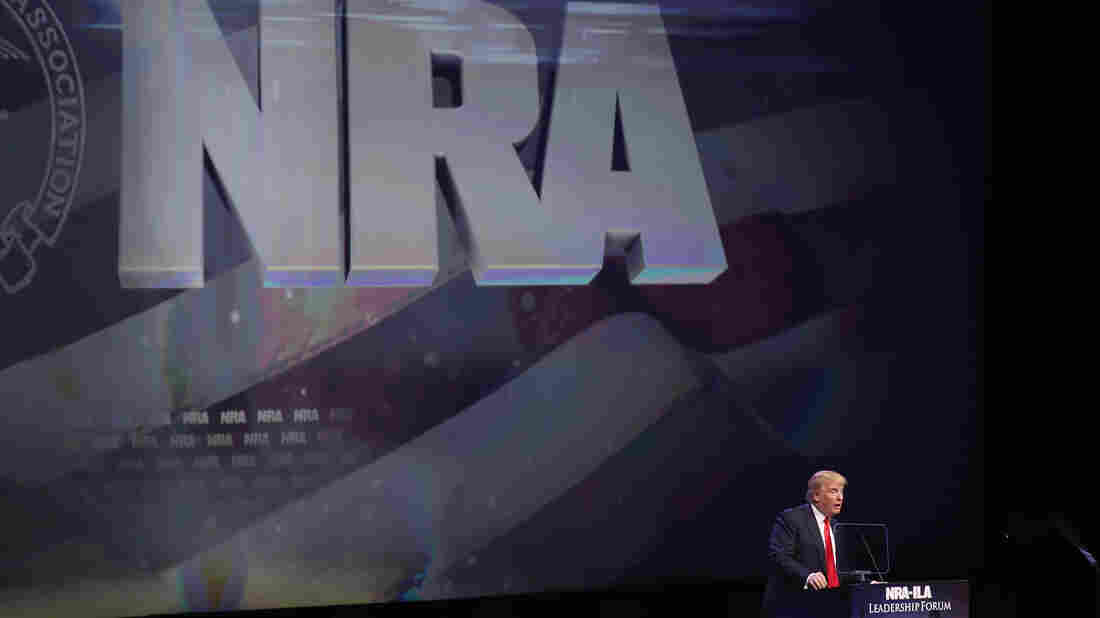 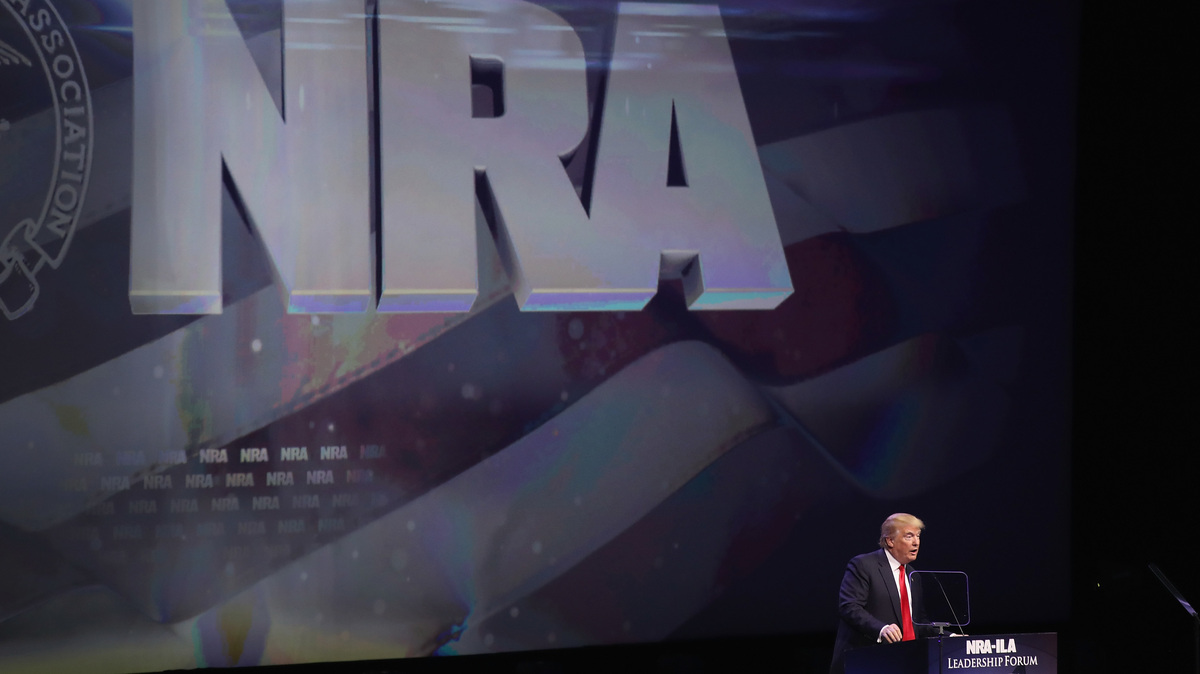 Then-Republican presidential candidate Donald Trump speaks at the NRA Convention in May 2016 in Kentucky.

Butina has been in the United States on a student visa since August 2016, but her role in the story traces back to at least the preceding March. That was when, according to court documents, she relied on relationships with at least one key American connected to the NRA to begin building the foundation for what prosecutors allege was her illegal work as a foreign agent.

Butina is charged with failing to register under the Foreign Agents Registration Act, an allegation the Justice Department also has made against Donald Trump's former campaign chairman Paul Manafort.

The new court documents describe a series of messages she exchanged with other people discussing their work to try to advocate for Russia behind the scenes in Washington, D.C., as the 2016 political season wore on.

This adds new context to what was taking place behind the scenes by May 2016, when GOP fundraiser and NRA member Paul Erickson sent an email to Rick Dearborn, who was a staffer of then-Sen. Jeff Sessions and who went on to become a deputy chief of staff in the White House. Sessions, who has since become the attorney general, was an early supporter of Trump's upstart presidential bid.

"I'm now writing to you and Sen. Sessions in your roles as Trump foreign policy experts / advisors. [...] Happenstance and the (sometimes) international reach of the NRA placed me in a position a couple of years ago to slowly begin cultivating a back-channel to President Putin's Kremlin. Russia is quietly but actively seeking a dialogue with the U.S. that isn't forthcoming under the current administration. And for reasons that we can discuss in person or on the phone, the Kremlin believes that the only possibility of a true re-set in this relationship would be with a new Republican White House."

Democratic members on the House intelligence committee quoted that email in their response to the GOP majority's report earlier this year that said the contacts between people in the Trump camp and Russians in 2016 were at worst "ill-advised" and not evidence of conspiracy.

The Trump campaign aides who ultimately received this pitch did not agree to a formal meeting, but Torshin did meet the candidate's son Donald Trump Jr. briefly at an NRA convention in 2016.

Later in the year, Butina and Torshin discussed whether she should take a page from his playbook and serve as an "election observer" on behalf of Russia inside the United States.

Torshin had been an "election observer" in Tennessee in 2012 as part of a riposte by the Russian government to criticisms about its elections by the United States. He credited the political relationships he had formed with the NRA in gaining entrée to American election sites, as NPR's Tim Mak reported.

But the changed circumstances four years later prompted Torshin and Butina to conclude she should continue to lie low: "Only incognito!" she wrote, according to court documents. "Right now everything has to be quiet and careful."

The court documents unveiled on Monday also are significant for what they do not say.

None of the Americans with whom the Russians made contact are charged with any wrongdoing, for example; it's unclear whether there might be additional charges down the line and whether the Justice Department feels the U.S. citizens involved in the matter might have broken any laws.

The Justice Department has documented many cases in which Americans dealt with Russians involved with the attack on the 2016 — either with social media agitation or as part of the strategy to steal and then release embarrassing information — but so far no American has been charged as a witting conspirator.

The court documents released on Monday also did not address whether any money had changed hands. One persistent question in the "infiltration" thread has been about whether the Russian government's connections to American political organizations included the use of contributions — either as direct donations or via "straw donors."

Russia's military intelligence agency, the GRU, used cryptocurrency to help pay for its cyberattack in 2016, according to an indictment unsealed Friday by Justice Department special counsel Robert Mueller.

The military officers involved laundered about $95,000 using electronic payments to cover the costs of servers, virtual private networks and other expenses, including some inside the United States.

Does the Justice Department's decision to omit money from its charges on Monday mean there was none and that aspect of the story is closed? And was there more "infiltration" than just that alleged in the court documents?

Although the charges on Monday confirm much of what has been understood so far about this thread, it isn't clear how much more there may be to learn.