Accessibility links
Arms Control Surfaced In Helsinki, But It's Likely Just Talk The U.S. and Russia still inspect each other's nuclear arsenals and have sharply curtailed the number of weapons poised to launch. That's thanks to two arms control treaties, which are now at risk. 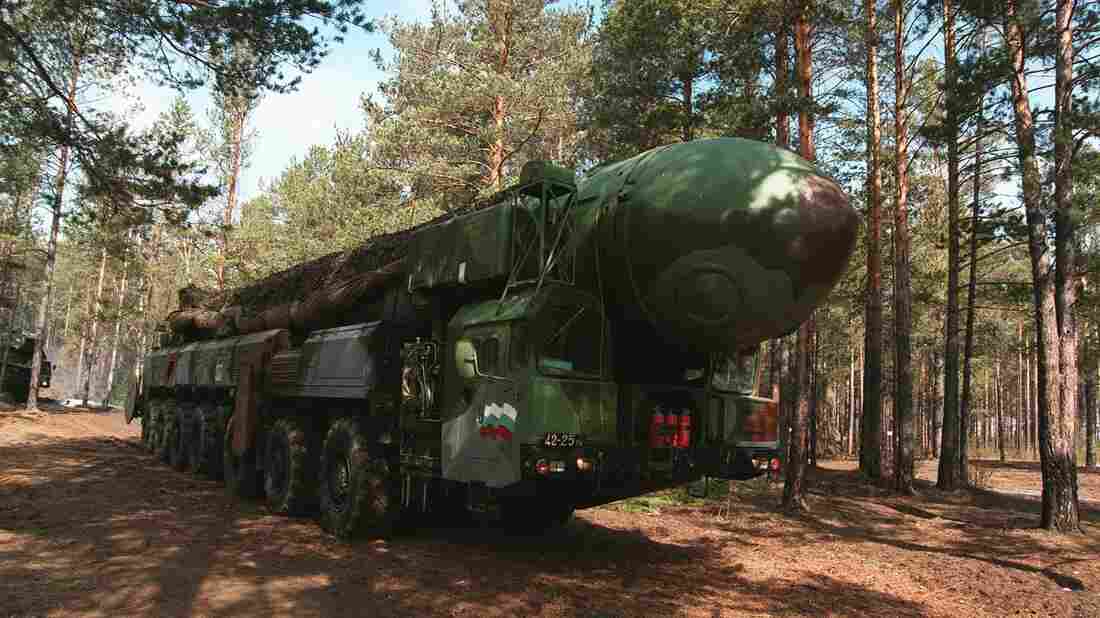 A Russian intercontinental ballistic missile is moved during military training in the mid-1990s near Irkutsk, Siberia, Russia. Arms control has been at the center of a decades-long discussion between Russia and the U.S. Associated Press hide caption 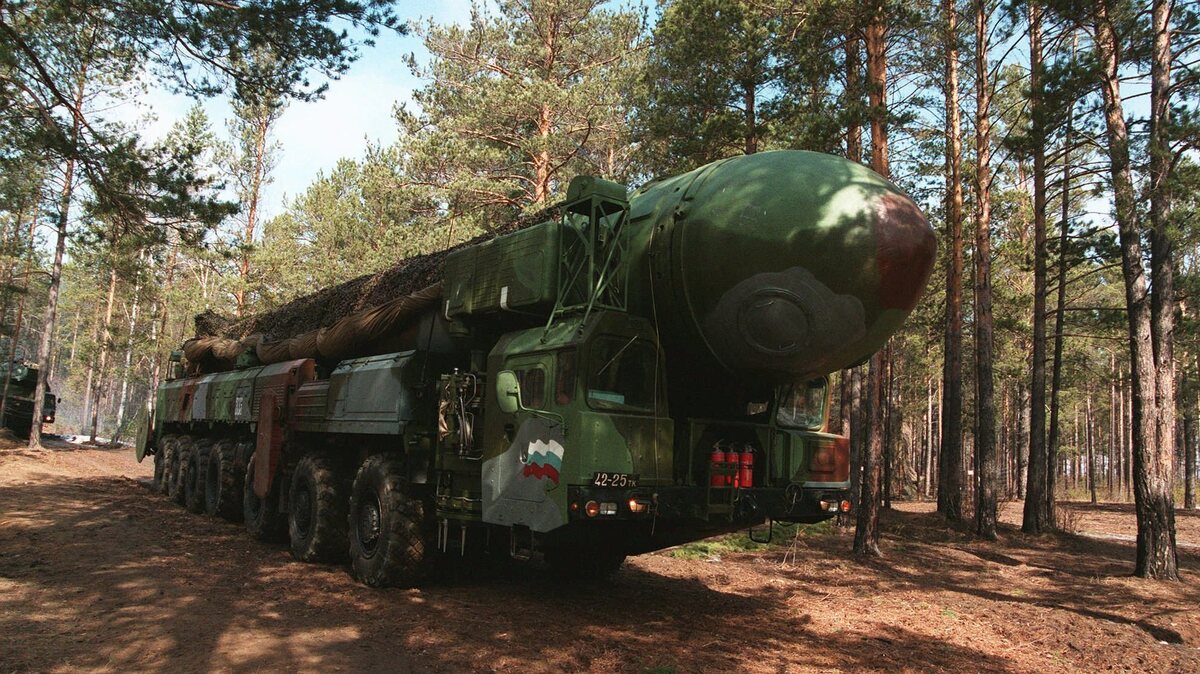 A Russian intercontinental ballistic missile is moved during military training in the mid-1990s near Irkutsk, Siberia, Russia. Arms control has been at the center of a decades-long discussion between Russia and the U.S.

For all the bad blood between the U.S. and Russia over the years, they still inspect each other's vast nuclear arsenals and both have sharply curtailed the number of nuclear weapons poised to launch. That is thanks to two arms control treaties, which are now at risk.

Even before the two leaders showed up at their post-summit news conference, arms control was already creating a stir there.

Security guards hauled away a man holding a sign reading "nuclear weapon ban treaty." It was a reference to a U.N. treaty approved last year that neither the U.S. nor Russia, which together have more than 13,000 nukes, had signed.

Putin told reporters that as major nuclear powers, the U.S. and Russia bear what he called "special responsibility for maintaining international security."

"We mentioned this during the negotiation. It's crucial that we fine-tune the dialogue on strategic stability and global security and nonproliferation of weapons of mass destruction," the Russian leader added. "We submitted our American colleagues a note with a number of specific suggestions."

On Putin's wish list: an extension of the soon-to-expire New START treaty, which he told Fox News that Moscow would be ready to discuss with the U.S.; talks about limiting U.S. missile defense systems, a clear reference to the terminal high altitude area defense batteries installed in Romania and Poland; and a discussion of the troubled Reagan-era Intermediate-Range Nuclear Forces treaty, which Russia and the U.S. have accused each other of violating.

"It's the usual agenda, and I wouldn't read that much into it," says Olga Oliker, who directs the Russia and Eurasia program at the Center for Strategic and International Studies, "other than the fact that these are things that they actually could have put together into something of a joint statement, because there is enough agreement, even if it's agreement to talk about the disagreements, to have gotten a 'get' out of the summit on these topics. Instead what we have is: The Russians passed over a paper with suggestions."

While it was clearly Putin who took the initiative on reviving the stalled arms talks, Trump was eager to chime in.

"Whether it's nuclear proliferation in terms of stopping, we have to do it," he declared at the joint news conference. "Ultimately that's probably the most important thing that we can be working on."

But some who have followed arms control talks with Moscow for decades have doubts about what such presidential expressions of concern might actually produce, despite Putin's proclaimed interest in extending the New START (Strategic Arms Reduction Treaty) agreement.

"I think that you will not get any arms control agreements out of Helsinki," says Dimitri Simes, president of the Washington-based Center for the National Interest. "Neither side is quite prepared for that."

There are few well-known nonproliferation experts who serve in the Trump administration. And White House national security adviser John Bolton has a record of staunchly opposing arms control deals.

In Finland, Trump put the blame for inaction on arms control on the Justice Department investigation of Russian interference in the election that brought him to power.

"It has had a negative impact upon the relationship of the two largest nuclear powers in the world. We have 90 percent of nuclear power between the two countries," Trump said, apparently referring to the 92 percent share of the world's nuclear weapons held by the U.S. and Russia. "It's ridiculous; it's ridiculous what's going on with the probe."

But with Russia's 2014 invasion of Ukraine and annexation of Crimea still officially condemned by the U.S., it's not clear how much enthusiasm there might be in Washington for a new arms control agreement with Moscow, or even extending the Obama-era New START treaty.

"At the State Department and in other parts of the U.S. government," says CSIS' Oliker, "there is a desire not to reach any agreements with the Russians without some sort of resolution of the Ukraine crisis."

Trump made no public comments in Helsinki about that unresolved crisis.