Accessibility links
'Alternatives To Detention' Are Cheaper Than Jails, But Cases Take Far Longer The Trump administration faces the same challenge as its predecessors: if you cannot detain immigrant families, how do you ensure they show up for hearings and deportation? 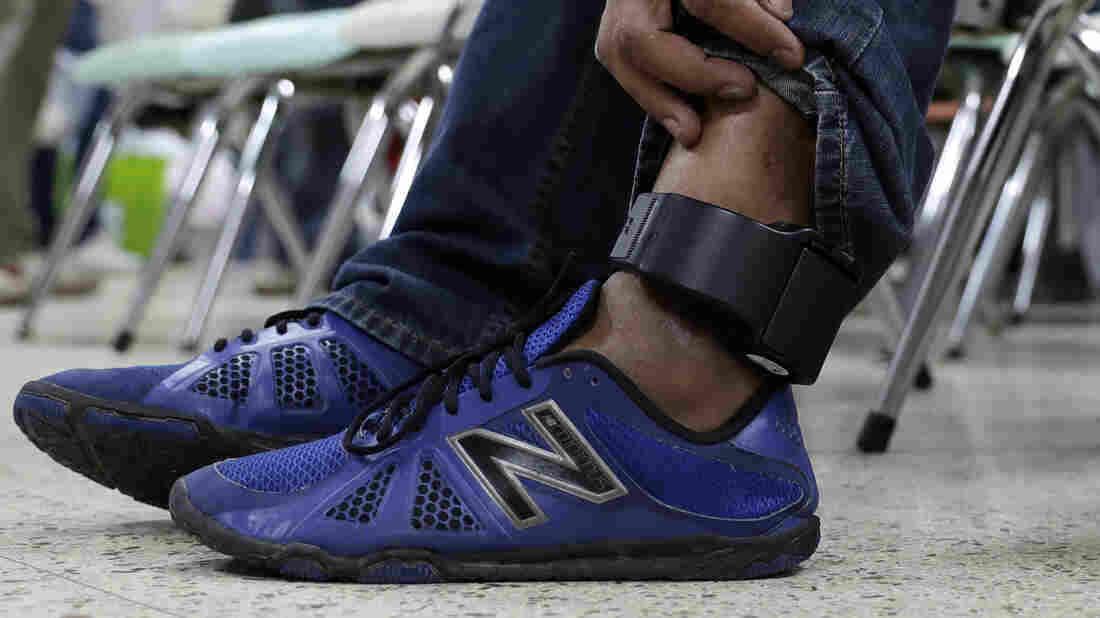 An immigrant wears an ankle monitor as he sits at a shelter in McAllen, Texas after he was released after processing by U.S. Customs and Border Protection. Eric Gay/AP hide caption 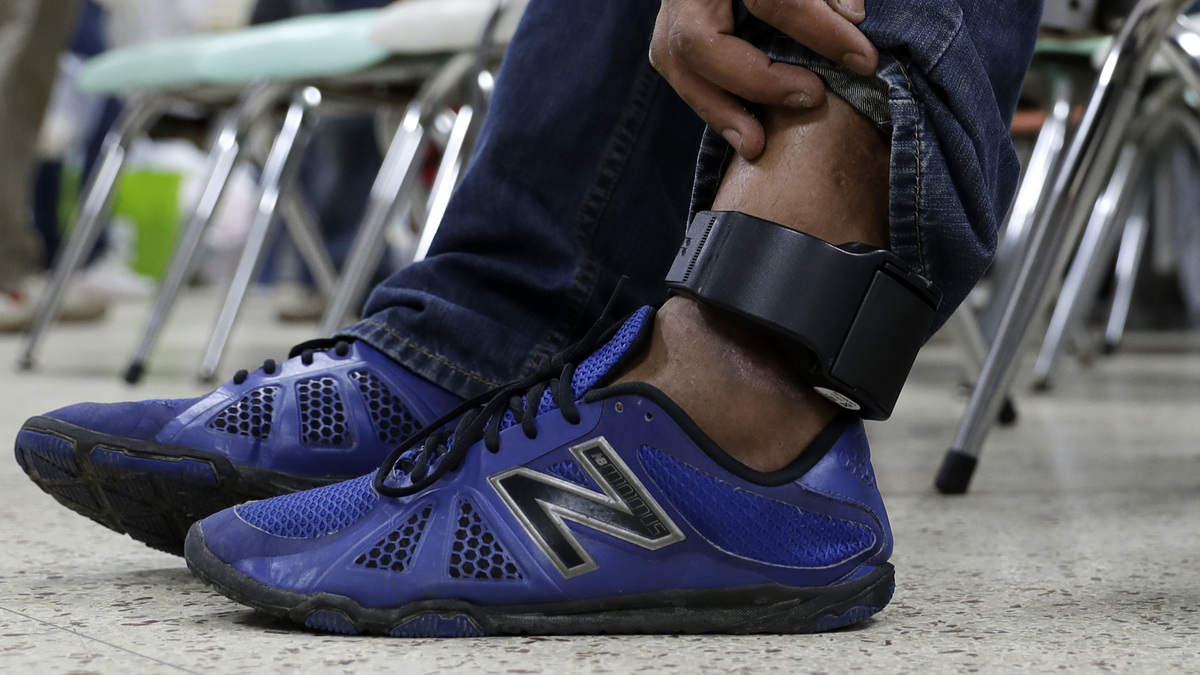 An immigrant wears an ankle monitor as he sits at a shelter in McAllen, Texas after he was released after processing by U.S. Customs and Border Protection.

The Trump administration faces the same challenge as its predecessors: how to ensure the tens of thousands of unauthorized immigrant families who are apprehended each year show up for their immigration hearings. Trump wants to lock more of them up. Immigrant advocates want him to expand alternatives to detention, which are already widely in use.

Inside the Greyhound station in San Antonio, dozens of Central American mothers sit in the waiting room, each with a bulge under the leg of her government-issued jeans. These women entered the country illegally to request asylum, spent time in detention, and were released with a black plastic GPS device strapped onto their ankles so the government can keep track of them.

A young woman who gives her first name as Mari says when she reaches her destination of Miami she plans to follow instructions and check in with the office of Immigration and Customs Enforcement, ICE.

There's so much violence in my country, that's why I fled. I'm not a criminal.

"There's so much violence in my country, that's why I fled. I'm not a criminal," she said, staring sheepishly at the blinking appliance fastened to her leg.

Mari is one of more than 84,000 undocumented migrants who is enrolled in electronic monitoring—usually either an ankle bracelet or a smartphone check-in that uses voice recognition.

The Obama administration, and now the Trump administration, would have preferred to detain Mari and her three kids indefinitely. But a court order forces the government to release families after three weeks in detention for the welfare of the children.

Concertina wire is in vogue under this president.

The administration is paying for 40,000 private contracted detention beds this year, a 3 percent increase over last year. There is a mammoth new immigrant jail under construction near Houston.

And recently, the administration has proposed detaining immigrant families on military bases.

"Certainly, confinement sends a very, very strong message," said Tracey Valerio, a top ICE official who oversaw the agency's budget until she left in April of this year. "But the agency has had extremely good results in terms of percentage of compliance with the alternatives to detention."

All detention — especially family detention — is expensive. The government pays a private jail contractor about $320 dollars per night — as much as a five-star hotel — to detain a mother and her children in what ICE calls a family residential center.

Compare that to an electronic ankle monitor at $4.12 a day. The ankle monitor program is managed by GEO Care, a non-prison subsidiary of the same mammoth corrections contractor, GEO Group, that detains thousands of immigrants for ICE.

Sarah Saldaña was chief of ICE for the last two years of Obama's presidency. She thinks immigrant detention should be used more selectively.

Thwarted by the courts to more fully use family detention, Saldaña says when she ran the agency it was open to exploring alternatives. "We were trying to come up with something that was cost effective and somewhat based on compassion," she said.

A promising idea was Family Case Management. The pilot project used case workers in five U.S. cities to help migrants navigate the immigration court system. The program cost less than $10 a day and had a 99 percent success rate with court appearances and ICE check-ins. ICE cancelled the program last year.

Catholic Charities was one of the faith-based groups that administered Family Case Management. Grantees were disappointed when it was suspended.

"Alternatives to detention assure compliance for people who don't work in a detention setting—people with mental health issues, trafficking or torture survivors, asylum seekers and families," said Ashley Feasley, policy director for the Migration and Refugee Services office of the U.S. Conference of Catholic Bishops.

ICE declined to go on the record for this report. A spokesman for the agency said in an email that ATDs — alternatives to detention — have a 99.8 percent success rate. But here's the hitch: they are most effective at getting the participant to show up for their immigration hearings. If the migrant loses their asylum request and is ordered deported then ankle monitors are not as successful at bringing about final removal. And deportation is how ICE keeps score.

Figures with the Executive Office for Immigration Review (EOIR), which runs the immigration courts, show that four out of ten non-detained immigrants do not show up for their final removal.

The Justice Department, of which EOIR is a part, has chosen to put people on ATDs at the end of the line. They're on the non-detained docket "which is so backlogged that it takes years for these cases to be heard and resolved," said Jessica Vaughan, policy director with the Center for Immigration Studies, which embraces Trump's immigration agenda and supports detention for people in the country illegally.

"Whereas, if people are kept in government custody they are on a different docket that moves much more quickly," Vaughan continued, "and they can be resolved in a matter of weeks rather than years."

"This kind of misnomer has been formed in Washington that the only way to actually enforce our immigration laws is to detain people," he says. "There's another way of doing this that is far, far cheaper, far more humane, but just as strong on the immigration enforcement component."

This former ICE director has a solution: continue to use alternatives to detention, but hire more immigration judges to grind through the massive case backlog.