Accessibility links
Thai Cave Rescue: Boys And Coach Speak To Press As They Leave Hospital The 12 members of the Wild Boars soccer team and their coach, who were trapped in a cave together for two weeks, are set to go home from the hospital. 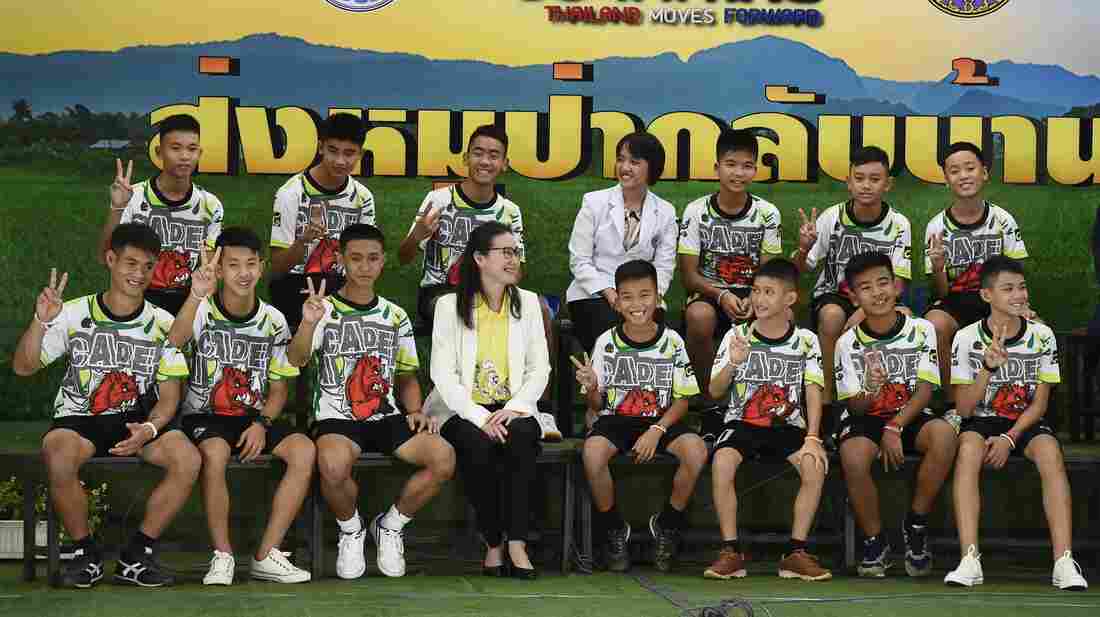 Twelve boys and their soccer coach, rescued from a flooded cave in northern Thailand, described their ordeal at a news conference in Chiang Rai on Wednesday, after they left the hospital. Lillian Suwanrumpha/AFP/Getty Images hide caption 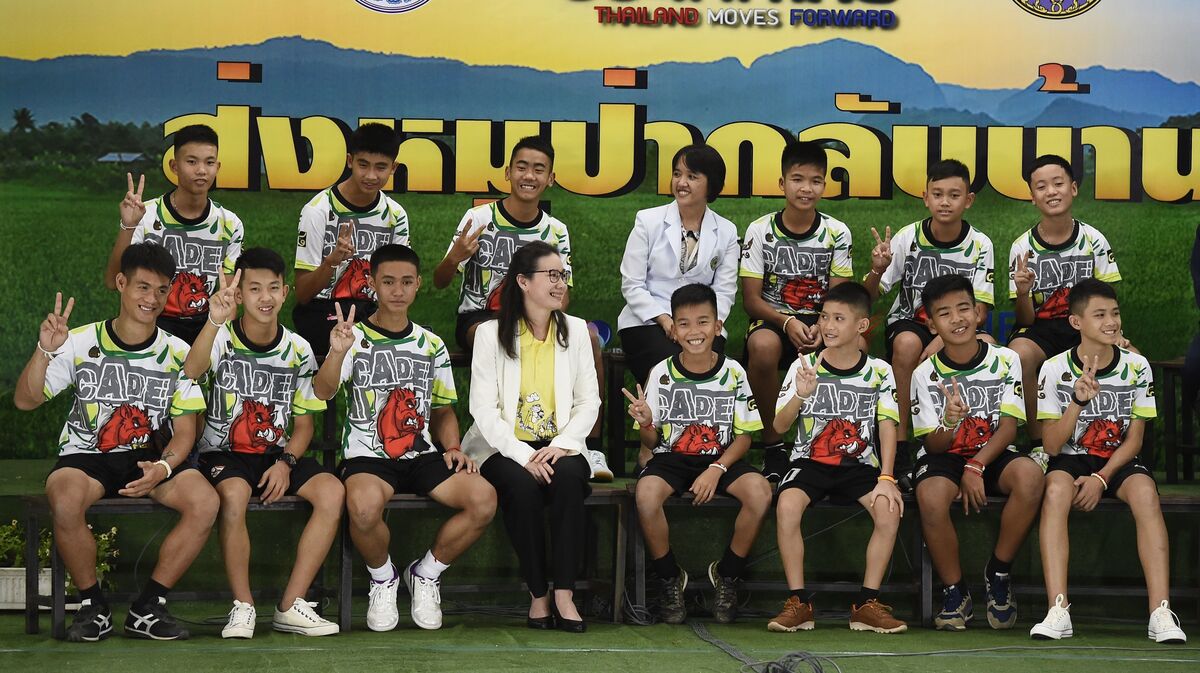 Twelve boys and their soccer coach, rescued from a flooded cave in northern Thailand, described their ordeal at a news conference in Chiang Rai on Wednesday, after they left the hospital.

The 12 members of the Wild Boars soccer team and their coach subsisted on water that flooded the cave where they were trapped for two weeks — and they now regard the divers who saved them as family, they said at a news conference on Wednesday after finally leaving a hospital and preparing to return to their homes in northern Thailand.

The boys looked to be in good health as they approached the news conference, smiling as they walked and wearing matching green and white jerseys bearing a wild boar. They kicked a soccer ball around for a moment before they were briefly reunited with classmates.

Asked what the moment was like when they finally were found in the cave — and got their first sign of hope — one of the boys, Adul Sam-On, told the media that they had heard a strange noise but that "we were not sure if it was a hallucination."

When they realized it was real, he said, "We were startled."

Using a flashlight, one or two boys went to the edge of the water inside a chamber of the flooded cave system, yelling, "Hello!"

A man emerged from the water — British diver John Volanthen — who said hello back to the boys. The boys said they were surprised he wasn't Thai, and they struggled to communicate in English. The man asked how many were still alive — and upon hearing that all 13 had survived, the diver replied, "Brilliant."

Video of the first contact with the missing team was posted on the Thai navy SEALs' Facebook page.

The team's 25-year-old coach, Ekapol Chanthawong, said he asked his players which of them spoke English and could translate. In the excitement of being found, he rushed to speak to the diver.

"Be calm, be cool," one of the boys recalled telling his coach, asking him to slow down.

Adul Sam-On, a 14-year-old from conflict-torn Myanmar whose parents sent him to Thailand and who has been called "stateless," acted as translator. It has been reported that he can speak four languages.

Everyone was very happy to be found, the boys said. But they struggled to answer all of the diver's questions — in large part because they were so hungry.

"My mind couldn't work quickly enough," Adul said. "It's just all I could think about: food."

Recounting how they came to be trapped, Chanthawong, who had been to the Tham Luang Nang Non cave before, said the team wanted to go after soccer practice on June 23. They had planned to be out by 5 p.m. because it was the birthday of one of the boys, Peerapat Sompiangjai, nicknamed "Night."

They went inside, leaving their bicycles, backpacks and soccer shoes near the cave's entrance.

Chanthawong noticed there was "a little bit of water" just beyond a three-way juncture in the vast, underground network — but not enough to cause alarm. The boys wanted to explore further, so the coach decided to lead the way into the water to see if the group could swim through it.

(It was widely reported that nearly all of the boys were unable to swim. That wasn't accurate, Chanthawong said, adding that all of them could swim to some extent, partly because he had helped them practice.)

As the group got deeper into the cave network, the coach told the boys that if they wanted to reach the farthest point of the chamber, they would need to dive to get there. They also talked about returning to the cave the next day.

But as they began to make their way back, Chanthawong said, one of the boys reported that water was rushing in as they neared the juncture. They later learned that the flooding was driven by a severe rainstorm.

The rushing water and quickly changing conditions confused the boys and made them wonder if they were lost. The coach said they weren't — and he took a rope with him to see if he could find a way out through the water.

"If I pull twice, that means that I saw the exit," he said. "But if I don't pull two times, then pull me back."

All he could find, Chanthawong said, were rocks and sand.

When he returned, he told his players, "We can't go out now. We have to go to look for another exit."

At the news conference, the boys were asked what they felt after hearing that.

"I was afraid," said Mongkol Boonpiam, 13, adding that he was sure his mother would scold him for not coming home on time.

Others said they were confident they weren't lost, and that they would make it out. They said they tried to be calm and not lose hope. Attempts to dig their way out led nowhere, and the water level showed no signs of lowering.

The group looked for a place to spend the night, Chanthawong said. After finding a safe spot, they prayed.

The team had no food, having eaten after soccer practice earlier that day. They survived by drinking water streaming down a rock face near the ledge where they stayed for most of the next two weeks. To preserve their batteries, they used one flashlight at a time.

The boys said they felt weak and hungry during their ordeal, and that they pined for their favorite foods — fried rice was mentioned several times. After they were rescued, one boy said that he wanted to eat khao pad grapao, a popular Thai rice dish of meat stir-fried with basil and chili peppers.

The news conference did not feature back-and-forth discussions with the media; instead, journalists submitted questions for the team in advance, according to the Thai Public Broadcasting Service.

An interpreter at the event, which was timed to air as a segment of the Thailand Moving Forward show, on a government channel, said the boys have been declared physically and emotionally ready to return to society.

The 12 boys and their coach were rescued over the course of three days last week, ending the ordeal that began on June 23. They were trapped more than a mile from the main entrance, and rescue divers had to navigate tight and treacherous passages to retrieve them.

The miraculous rescue came after meticulous planning and teamwork among Thai and international emergency workers and divers. Tragedy struck when former Thai navy SEAL diver Saman Kunan died during work to place air tanks along the escape route. He has been hailed as a hero who sacrificed himself for the boys' safety.

Discussing the late diver, Chanthawong said, "We feel so sad." The team also presented a drawing of him, surrounded by messages they wrote in his memory. They want to send the picture to his family, the coach said.

The team's plight spurred prayers and vigils in Thailand and transfixed people around the world. Hours before Wednesday's news conference was to begin, journalists began pouring into the venue — a building that houses offices of the Chiang Rai provincial government.

"We are not sure if this is a miracle, a science, or what. All the thirteen Wild Boars are now out of the cave," the Thai navy SEALs team had said on its Facebook page when the extraordinary rescue was finally deemed a success.