Accessibility links
'Lifeline' Stretch Of California's Highway 1 Reopens 14 Months After Massive Mudslide More than 1 million tons of earth had come crashing down on the road in the rugged Big Sur area. Motorists can now drive uninterrupted along the coast between LA and San Francisco. 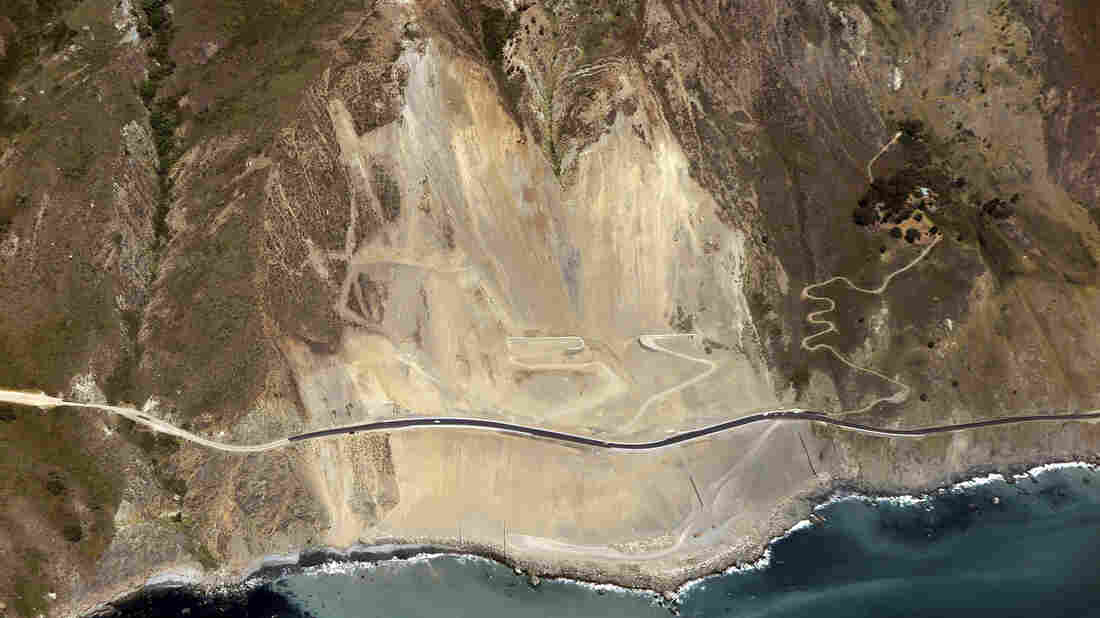 A stretch of Highway 1 that was crushed by a massive mudslide in 2017 near Big Sur, Calif., reopened for traffic Wednesday morning. AP via Caltrans hide caption 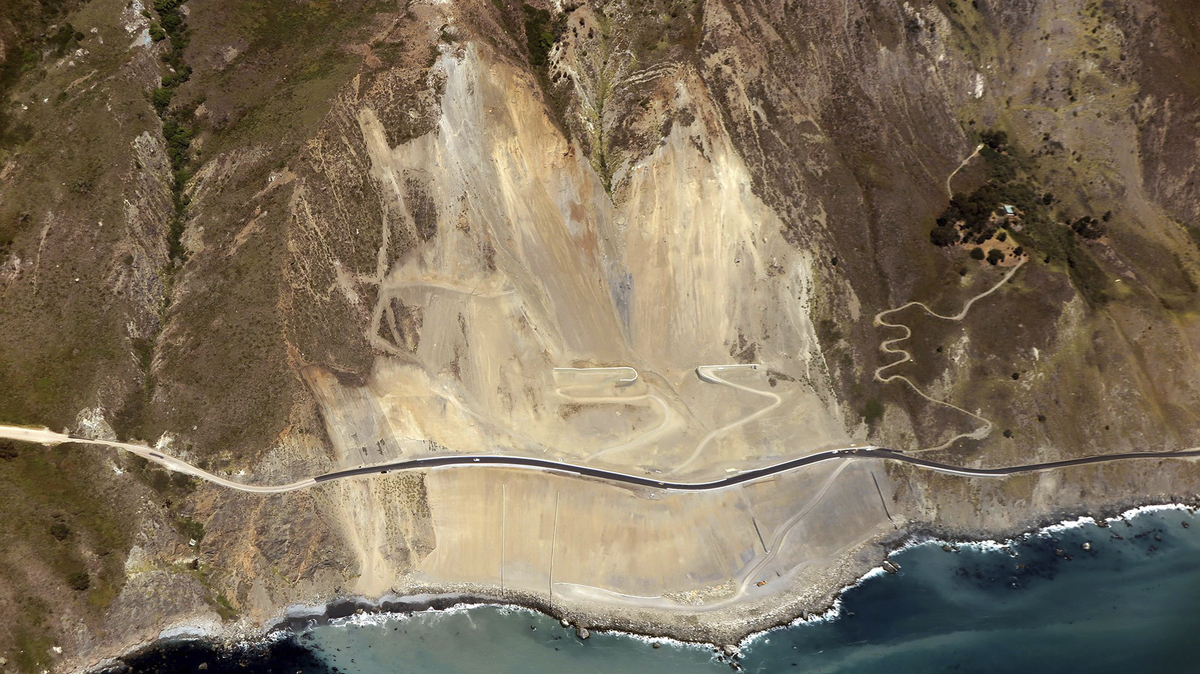 A stretch of Highway 1 that was crushed by a massive mudslide in 2017 near Big Sur, Calif., reopened for traffic Wednesday morning.

More than a year after a landslide shut it down, a section of Highway 1 running along a coastal stretch in California's Big Sur region reopened early Wednesday.

The California Department of Transportation announced that the roadway at Mud Creek was opening about two months ahead of schedule, thanks to favorable weather and worker productivity.

#Hwy1 at Mud Creek south of #BigSur is OPEN for business as of 9:45am! Safe travels, everyone. pic.twitter.com/hxX3AgQ1Dp

"It's a big deal to open the highway unrestricted," Colin Jones, a Caltrans spokesman told NPR.

Motorists driving between Los Angeles and San Francisco will no longer have to veer off the Pacific Coast Highway looking for detours and can instead take in stunning vistas of undeveloped coastline where crashing waves meet sweeping cliffsides. 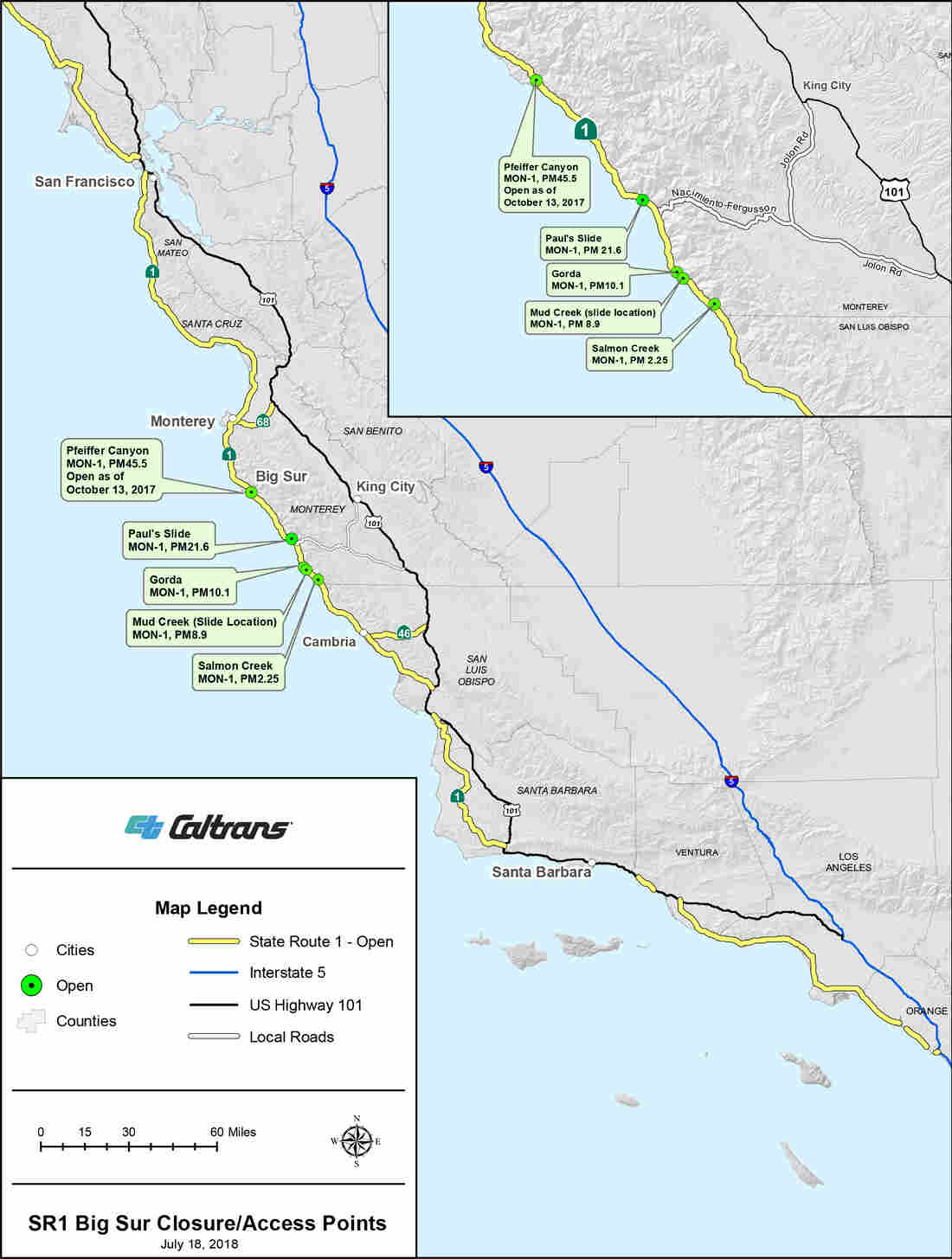 A massive mudslide on the California coast shut an iconic portion of Highway 1 for more than a year. On Wednesday, it reopened ahead of schedule, allowing motorists to drive along the coast between Los Angeles and San Francisco. Caltrans hide caption 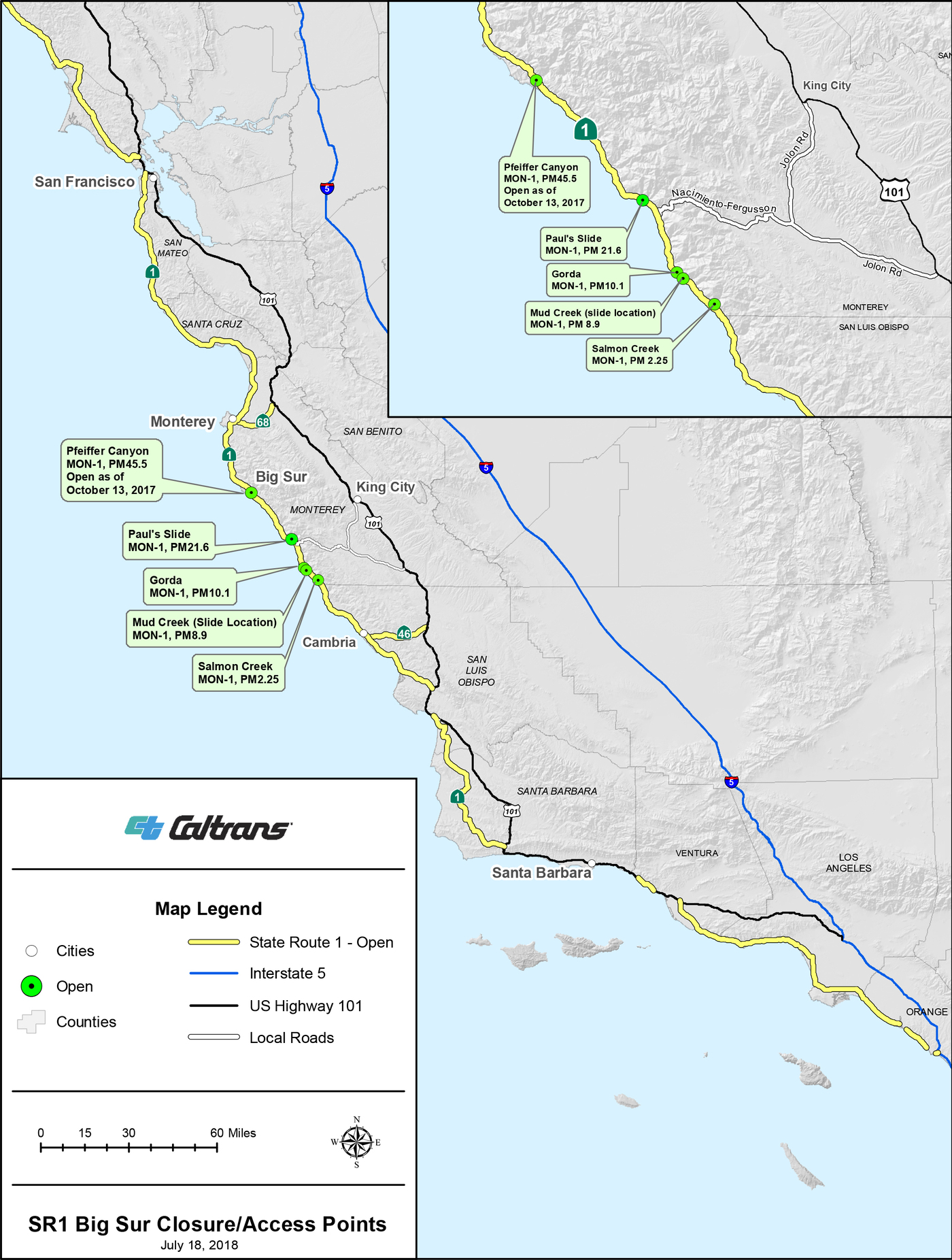 A massive mudslide on the California coast shut an iconic portion of Highway 1 for more than a year. On Wednesday, it reopened ahead of schedule, allowing motorists to drive along the coast between Los Angeles and San Francisco.

The reopening is also a significant step for communities left isolated after the May 2017 mudslide sent more than 1 million tons of mountainside crashing down on a quarter-mile of roadway.

More than a patch of asphalt, "the highway is our lifeline," Big Sur resident Erin Gafill told NPR at the time.

Tourists who had once flocked to the area were suddenly cut off, and businesses that relied on them were left foundering. 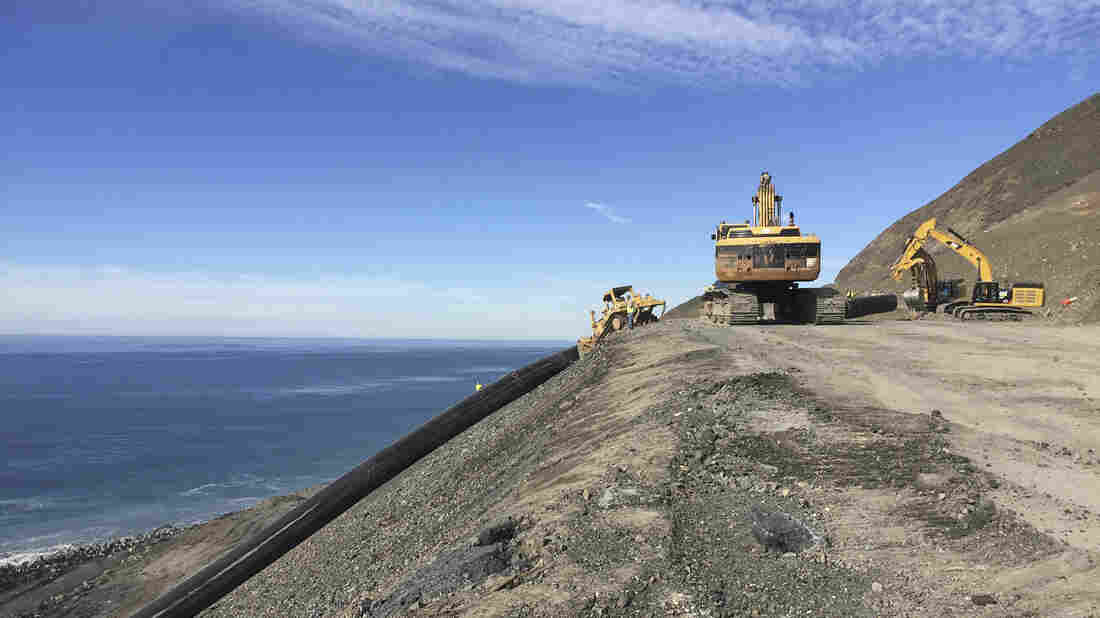 Crews worked to stabilize the Mud Creek section of Highway 1 that was hit by a massive landslide in May 2017. AP via Caltrans District 5 hide caption 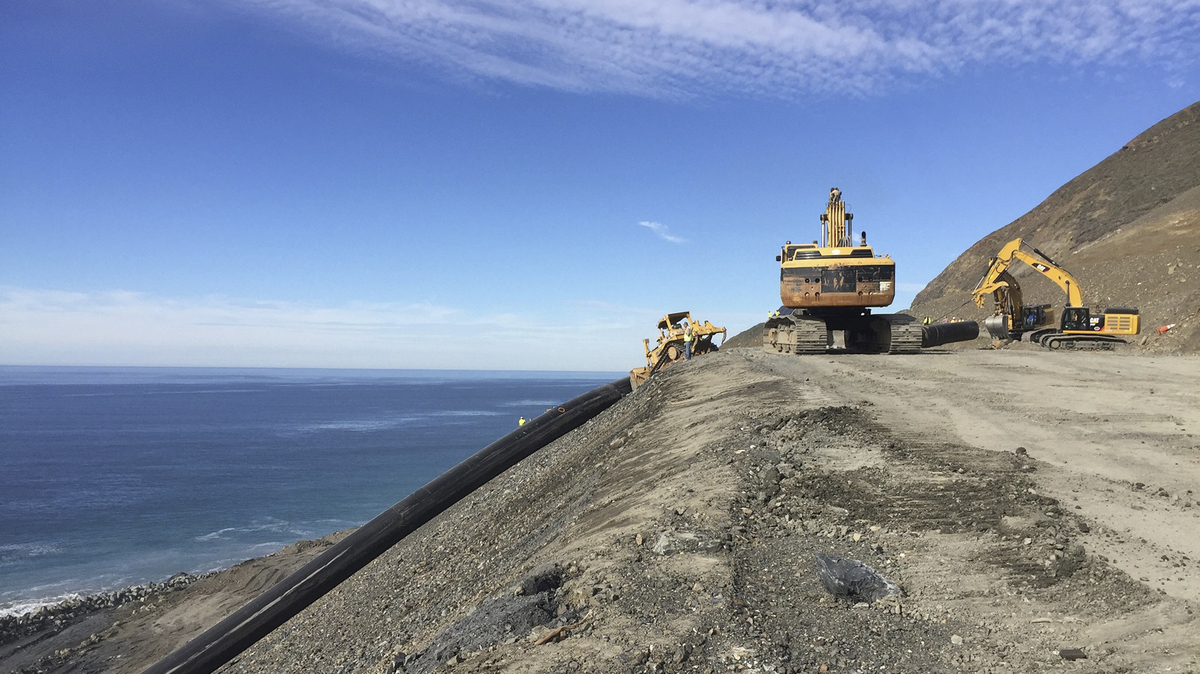 Crews worked to stabilize the Mud Creek section of Highway 1 that was hit by a massive landslide in May 2017.

"Everyone's out of work," said Gafill, who works as an artist, "and it's really, really challenging as you see your bank account kind of zeroing out."

The Wall Street Journal reports that revenues for area businesses plunged by as much as 90 percent after the roadway closed.

Now Leonardo Vargas, who operates a cliffside resort, was anticipating a surge in business ahead of the highway's reopening and was busy loading up on extra supplies. "It is going to be an incredible day," Vargas told the newspaper.

The raw beauty of the area is the very thing that makes it constantly vulnerable to landslides.

"This has sort of been the history of this coast from the beginning," John Duffy, an engineering geologist who consulted on the $54 million project to reopen the stretch of Highway 1, told the San Francisco Chronicle. "It's an emerging coastline geologically speaking, and it's in a constant state of trying to come to some stability."

Jones, the Caltrans spokesman, noted that Wednesday's reopening marks the first time in 18 months that motorists will be able to drive unrestricted along the Big Sur coast. Heavy rainfall last year had spurred smaller mudslides and a series of highway closures in the region.

Area residents have had to learn to be resilient and resourceful.

After Big Sur's Pfeiffer Canyon Bridge collapsed because of mudslides and was closed in February 2017, grocery store runs turned into a hiking trips with loaded backpacks.

"It's kind of hard because you need to carry lots of food," Juan Garcia, a fifth-grader hiking home from the school bus stop a mile below, told NPR's Kirk Siegler last year. "Your legs hurt."

The bridge has since reopened.

But the May 2017 slide was the worst the area had seen in decades.

The United States Geological Survey compiled a time-lapse animation of just how drastically it changed the landscape.

Buried under tons of earth, the old highway at Mud Creek was deemed unusable. So crews worked to stabilize the area where it reshaped the shoreline. "We just basically built across the slide that happened," Jones said. "We are always maintaining and monitoring that section."

The section of roadway is now buttressed with a series of embankments, berms, rocks, netting, culverts and other stabilizing material.

And yet, Jones acknowledged that it is Mother Nature who is in charge, particularly with land that's on the edge of the continent.

"Basically, you're living with landslides."