Accessibility links
Judge Orders Maria Butina, Linked To Russian Spy Agency, Jailed Ahead Of Trial A federal magistrate judge ordered a Russian woman charged with serving as a foreign agent into custody ahead of her trial after prosecutors said she was a flight risk. 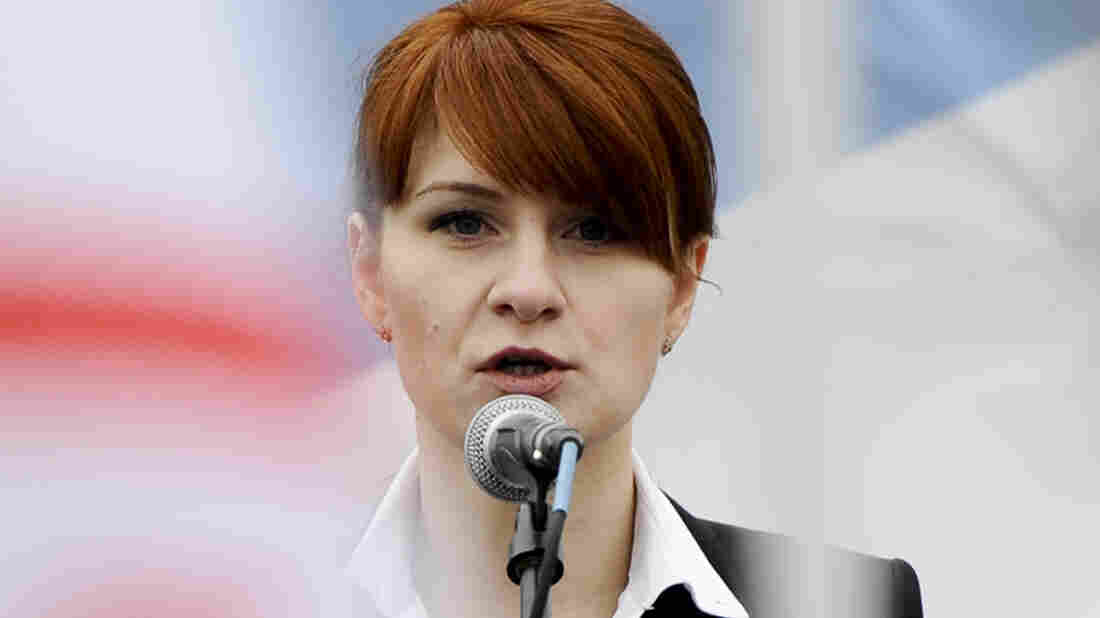 Prosecutors said on Wednesday that the FBI has information that Maria Butina has been in contact with Russia's FSB spy agency for as long as she has been in the United States. AP hide caption 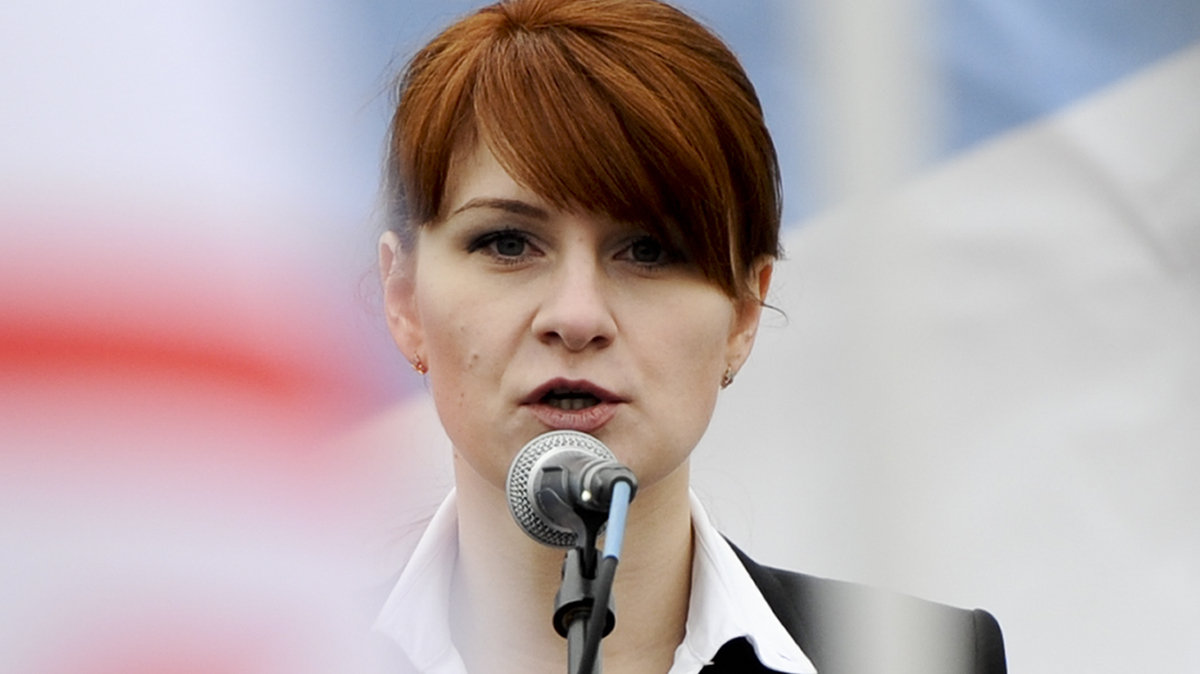 Prosecutors said on Wednesday that the FBI has information that Maria Butina has been in contact with Russia's FSB spy agency for as long as she has been in the United States.

A federal magistrate judge ordered Wednesday that a Russian woman charged with being a Russian agent in the United States must be jailed ahead of her trial after prosecutors said she was a flight risk.

The woman, Maria Butina, has been in regular contact with Russian intelligence, the Justice Department says, and she attempted to offer sex in exchange for a position with an organization she targeted.

Prosecutors included that information in court documents as part of their request that Butina be detained ahead of her trial because they said the danger was "serious" that she would leave the country.

Magistrate Judge Deborah Robinson found that the Justice Department had demonstrated by a preponderance of the evidence that nothing short of pretrial confinement could reasonably ensure that Butina would appear for her trial.

Prosecutor Erik Kenerson told the court that "the evidence is overwhelming the defendant was here on behalf of the government of Russia ... to carry out a covert influence campaign."

If Butina were permitted to remain at liberty, he warned, the Russian government could get her out of the country and the U.S. government might have no way to guarantee that she would appear.

"If she gets into a diplomatic car, that car can go across the border," Kenerson said. "We do not have an extradition treaty with Russia."

FBI agents arrested Butina on Sunday as she was apparently preparing to move to South Dakota. Her attorney, Robert Driscoll, told the judge that she would be willing to postpone that move and check in regularly if she were released.

The wider geopolitical context involving the United States and Russia shouldn't have any bearing on Butina's specific situation, he argued.

"Ms. Butina is not a proxy for any of the serious and substantial issues that our country has with Russia right now," Driscoll said.

Two Russian diplomatic officials attended the hearing, and Driscoll consulted with them during a short recess.

Butina smoothed her hair back when the judge issued the ruling and was led out of the courtroom by U.S. Marshals deputies. Butina had asked before the hearing to be able to wear civilian clothes for her appearance, but she was ordered to wear her orange jail jumpsuit.

Before the hearing on Wednesday, the government's attorneys cited "the nature of the charges, her history of deceptive conduct, the potential sentence she faces, the strong evidence of guilt, extensive foreign connections and her lack of any meaningful ties to the United States."

They also wrote that Butina, who was indicted on Tuesday by a grand jury in Washington, D.C., has "access to funds and an intention to move money outside the United States."

Moreover, they wrote, the lease on her apartment is up at the end of July and she had boxes packed, apparently with the intention to move.

"Because Butina has been exposed as an illegal agent of Russia, there is the grave risk that she will appeal to those within that government with whom she conspired to aid her escape from the United States," the government's attorneys wrote.

One apparent reason for the government's concern was the discovery that Butina has been in contact with Russia's FSB intelligence agency "throughout her entire time" in the United States, according to court papers.

FBI surveillance also spotted her with a Russian diplomat whom American officials believe was an intelligence officer. Intelligence officers often use an "official cover" as employees of their home country's foreign ministry.

FBI agents discovered March 2017 messages between Butina and Alexander Torshin, the Russian government official whom they've described as her main point of contact in Russia, in which he allegedly wrote: "You have upstaged Anna Chapman. She poses with toy pistols while you are being published with real ones."

Chapman belonged to the network of so-called illegal intelligence operatives rolled up by the FBI in 2010 and went on to enjoy a high media profile for some time afterward.

On Jan. 20, 2017, in response to a photo that Butina sent to Torshin near the U.S. Capitol on Inauguration Day, Torshin allegedly responded: "You're a daredevil girl! What can I say!"

Torshin was placed under sanction by the Treasury Department earlier this year and is barred from traveling to the United States. Authorities added that Butina has ties to wealthy businessmen in the Russian oligarchy.

The FBI said it has determined that even though Butina had a personal relationship with someone described in court papers as Person 1 — identified by NPR as political fundraiser Paul Erickson — she "offered an individual other than Person 1 sex in exchange for a position with a special interest organization. Further, in papers seized by the FBI, Butina complained about living with Person 1."

The organization is not identified in the court documents. Butina and Torshin sought to build bridges with American political leaders via the National Rifle Association, but it isn't clear whether that is the entity to which the government alluded in its court filing.

Erickson cited the "sometimes international reach" of the NRA as part of a pitch he made in 2016 to members of Donald Trump's campaign. He and the Russians sought to use the imprimatur of the NRA in order to arrange meetings between U.S. political leaders and Trump, citing a "back channel" Erickson had forged with the Kremlin.

The Trump campaign did not agree to a meeting with Russian President Vladimir Putin in 2016 as Erickson proposed, but Donald Trump Jr. did meet Torshin briefly that year at the NRA's convention in Louisville.

The NRA has so far made no comment this week about the charges against Butin or the Torshin connection.

The FBI said it saw Butina and Person 1 at a U-Haul truck facility on July 14, a day before she was arrested. Butina had boxes in her apartment the following day when the FBI arrived.