Accessibility links
More Than 140 'Sister Survivors' Of Larry Nassar Abuse Are Honored At ESPYS "I'm here to tell you, you cannot silence the strong forever," said one of the women who was onstage to accept the Arthur Ashe Courage Award. 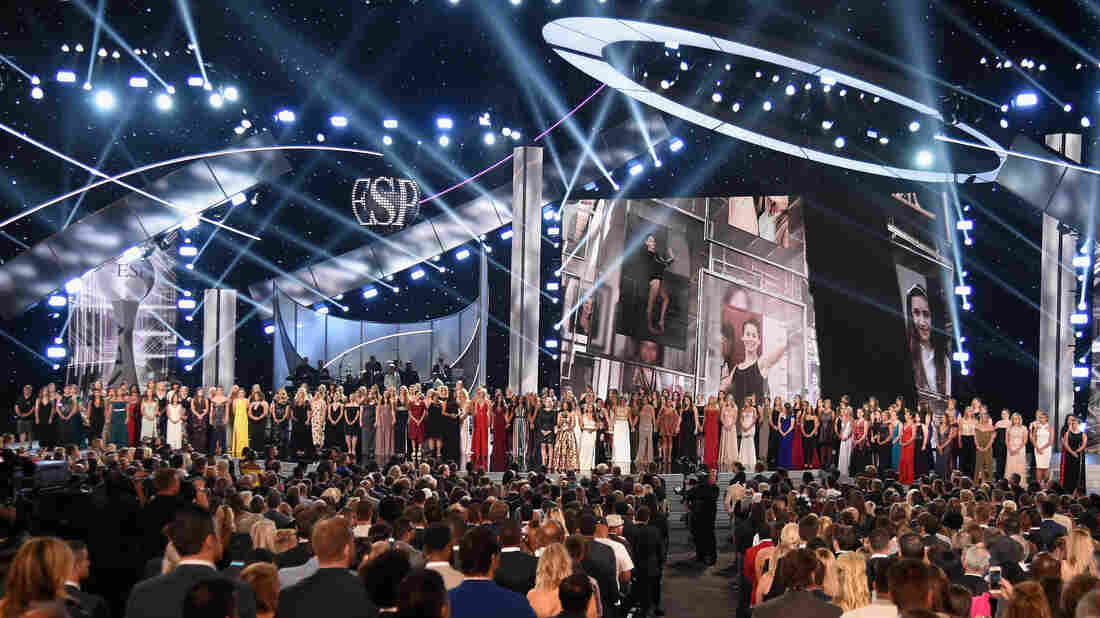 The Arthur Ashe Award for Courage was presented to the survivors of Larry Nassar's abuse at the 2018 ESPYS. Kevin Mazur/Getty Images hide caption 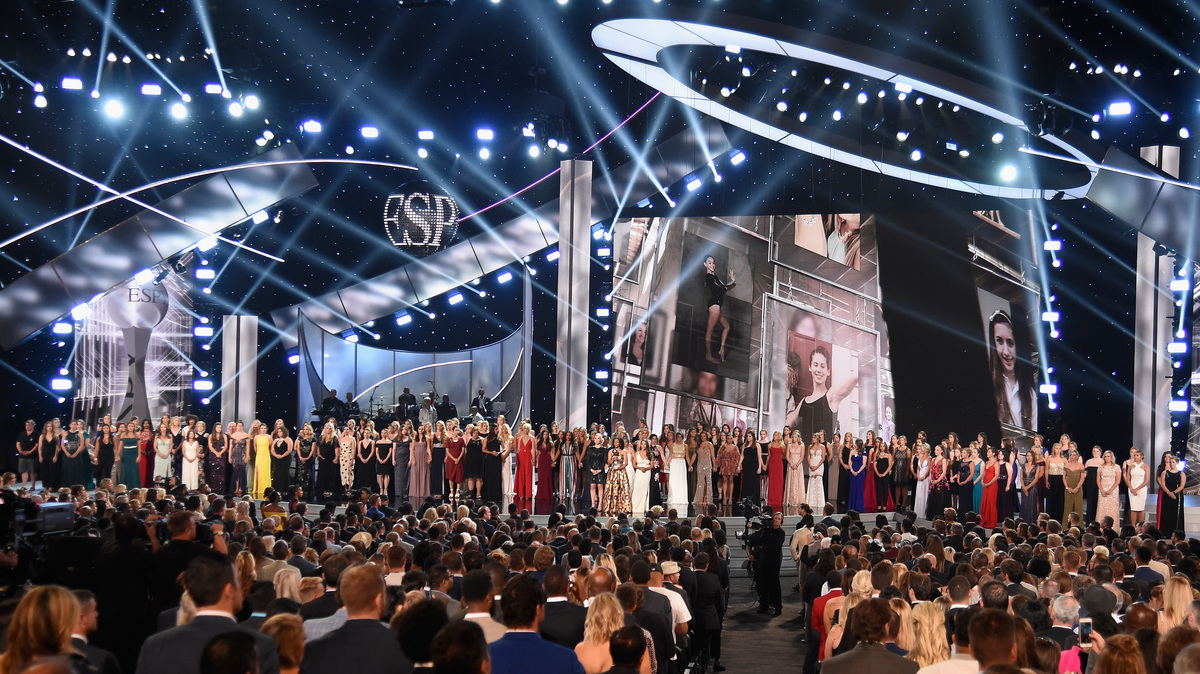 The Arthur Ashe Award for Courage was presented to the survivors of Larry Nassar's abuse at the 2018 ESPYS.

Their words helped ensure Larry Nassar will spend his life behind bars, and on Wednesday, the "sister survivors" of the disgraced sports doctor's abuse accepted the Arthur Ashe Courage Award at the 2018 ESPYS in Los Angeles.

Dressed in glittering gowns and with hands gripped, more than 140 women gathered onstage to share the prize awarded to athletes whose bravery "transcends sports," as the audience rose in a standing ovation.

“To all the survivors out there, don't let anyone rewrite your story. Your truth does matter. You matter. And you are not alone.”

Tonight, Aly Raisman and her sister survivors brought the #ESPYS audience to their feet. pic.twitter.com/0sVTI0wLUH

Sarah Klein, a former gymnast who said she was among Nassar's earliest victims three decades ago, was the first to address the audience.

"Speaking up and speaking out is not easy," she said. "Telling our stories of abuse, over and over and over again, in graphic detail, is not easy. We're sacrificing privacy, we're being judged and scrutinized, and it's grueling and it's painful, but it is time."

Now a mother, Klein added, "we must start caring about children's safety more than we care about adults' reputations,

Tiffany Thomas Lopez, who in the 1990s played softball at Michigan State University, where Nassar practiced, had a message for other victims who might still be silent.

"I encourage those suffering to hold tight to your faith, and stand tall when speaking your truth," she said. "I'm here to tell you, you cannot silence the strong forever."

Olympic gold medal gymnast Aly Raisman was the last to speak. She was unsparing in her criticism of the adults in the Nassar orbit who she said for years failed to protect the victims, instead opting to silence her and others "in favor of money, medals and reputation."

"But we persisted, and finally, someone listened and believed us," Raisman said of the abuse by Nassar, who was a doctor for the U.S. Olympic gymnastics team.

In January, more than 150 women and girls, including Klein, Thomas Lopez and Raisman, gave victim impact statements at one of Nassar's three trials.

Before the Lansing, Mich., courtroom, they spoke of abuse under the guise of medical treatment, which for some began when they were elementary school age.

Following their testimony in that case, Circuit Court Judge Rosemarie Aquilina sentenced Nassar to up to 175 years behind bars.

His trials may be over, but the scandal continues to reverberate.

Leaders at the U.S. Olympic Committee, at USA Gymnastics and Michigan State have stepped down or been forced out, and dozens of lawsuits are pending.

In May, Michigan State agreed to a $500 million settlement with survivors.

"Perhaps the greatest tragedy of this nightmare is that it could have been avoided" Raisman said at the ESPYS on Wednesday. "Too often, abusers, and enablers perpetuate suffering by making survivors feel their truth doesn't matter. To the survivors out there, don't let anyone write your story."