Accessibility links
Russia Says Agreements Were Discussed With Trump On Syria. The U.S. Is Silent The Trump administration has offered no information about supposed "specific" proposals that Russian officials have mentioned publicly. 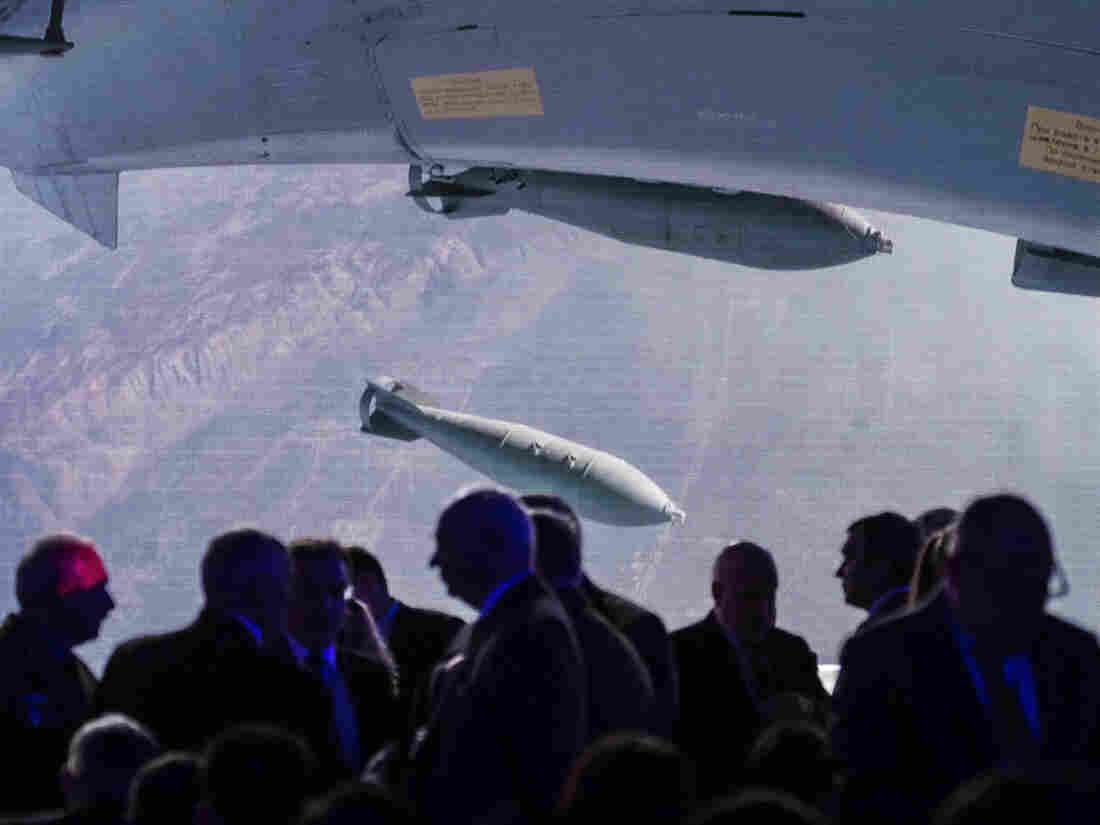 Participants at a global security conference in Moscow in April gather near a big screen showing a Russian warplane unloading its weapons over a target in Syria. Russia became involved in the Syrian civil war in 2015 in support of its ally President Bashar Assad. Alexander Zemlianichenko/AP hide caption 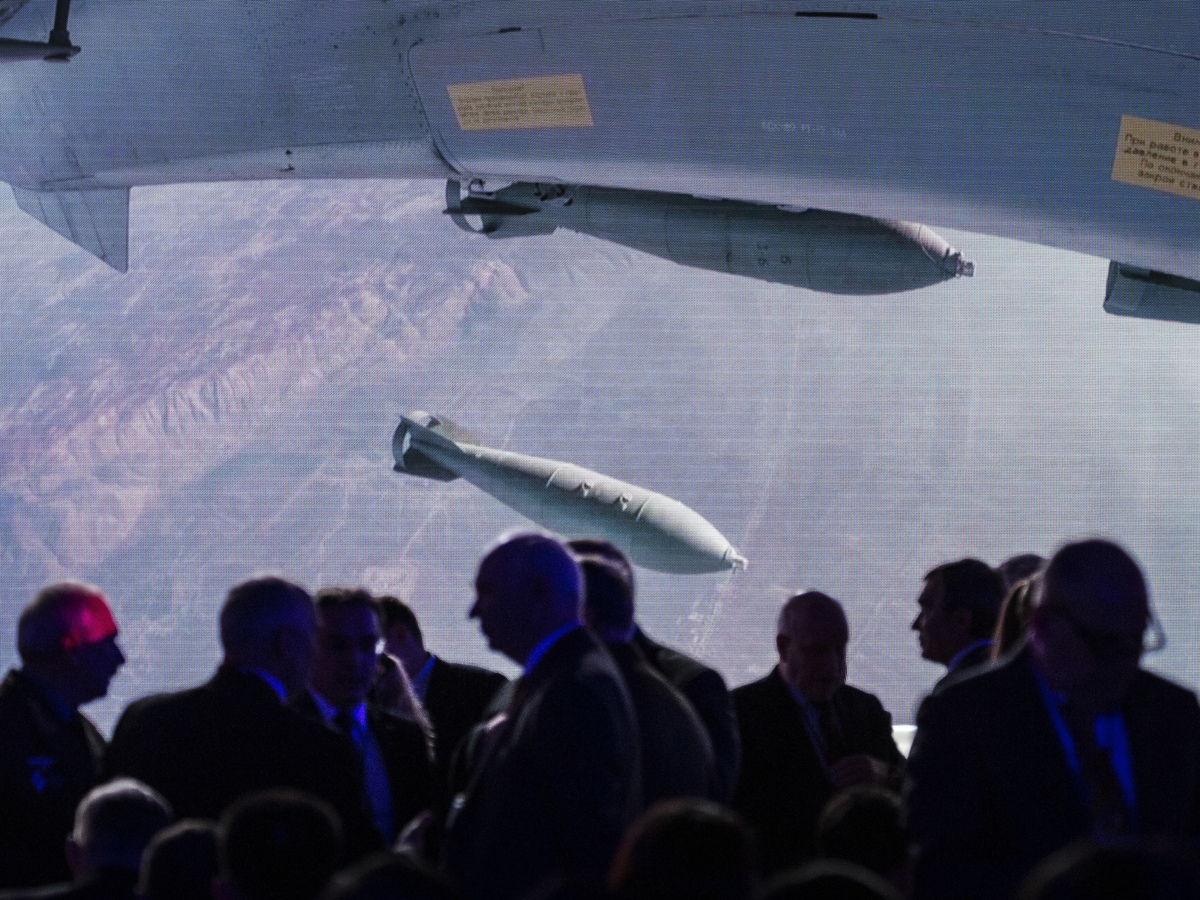 Participants at a global security conference in Moscow in April gather near a big screen showing a Russian warplane unloading its weapons over a target in Syria. Russia became involved in the Syrian civil war in 2015 in support of its ally President Bashar Assad.

Russian officials are saying the meeting in Helsinki between President Trump and Russian President Vladimir Putin resulted in an agreement that includes cooperation between the two countries in Syria.

Speaking at a news conference next to Trump on Monday, Putin said establishing peace and reconciliation "could be the first showcase example of the successful joint work. Russia and the United States apparently can proactively take leadership on this issue," including overcoming the humanitarian crisis and helping Syrians go back to their homes.

Russia's ambassador to the United States, Anatoly Antonov, told reporters on Wednesday Putin spoke with Trump about "specific and interesting proposals," on how the two countries could work together in Syria.

No official joint communiqué came out after Helsinki.

So far, Russian officials are the only ones providing information about any agreements discussed at the summit. The Pentagon has been silent. And the White House put out a statement, saying it was reviewing the discussions between the two presidents and "considering possible next steps."

But there's a problem for the U.S. military to work closely with Russia: It's illegal.

A 4-year-old law — the result of Russia's seizure of Crimea from Ukraine — prohibits any U.S. cooperation or coordination with Russia's military.

"It is true that the National Defense Authorization Act as a law prohibits us from coordinating, synchronizing, collaborating with Russian forces so that does guide our activities," said Gen. Joseph Votel, who oversees U.S. military operations in the Middle East, including the anti-ISIS fight.

So how could the U.S. work with Russia in Syria? The general said there would have to be some type of waiver that allows it.

That all seemed lost on President Trump on Monday, when he spoke at the Helsinki news conference standing next to Putin.

"Our militaries do get along very well," Trump said, "and they do coordinate in Syria and other places."

Here's another problem: The U.S. and Russia don't see eye to eye on desired outcomes in Syria.

Russia is working to prop up the government of Syrian President Bashar Assad, whose forces — with Russian military assistance — have targeted anti-regime rebels, killed more than half a million Syrians, and left millions homeless and millions more fleeing as refugees to Turkey, Jordan and Lebanon. Moscow considers all anti-Assad forces to be "terrorists."

The U.S. is focused solely on defeating ISIS, and Pentagon and State Department officials hopes to help Kurdish and Arab rebel allies in Syria get a spot at the peace table.

Russia suggesting the two countries work on the humanitarian effort and returning displaced Syrians to their homes has many analysts shaking their heads.

Russia and its Syrian allies have bombed aid convoys, hospitals and schools. And in late June, in southwestern Syria, scores of women and children were killed by airstrikes and an aid worker with an affiliate of the relief organization CARE was killed in a shelling. Hundreds of thousands more fled for their lives.

The violence goes against a cease-fire deal in that part of Syria, brokered by the U.S., Russia and Jordan last year.

In Helsinki, @POTUS agreed to ongoing working level dialogue between the two security council staffs. President Trump asked @Ambjohnbolton to invite President Putin to Washington in the fall and those discussions are already underway.

White House press secretary Sarah Huckabee Sanders tweeted Thursday that "discussions are already underway" for a possible next meeting between Trump and Putin in Washington this fall.

Meanwhile, officials across the U.S. government are still trying to determine what deals may have been reached in the first summit in Helsinki.

Among them, National Intelligence Director Dan Coats had this to say to NBC News: "I don't know what happened in that meeting."