Accessibility links
Comic-Con, Day 2: Who's Day Our intrepid reporters Mallory Yu and Petra Mayer take on another day of San Diego Comic-Con, from immersive fan adventures to, yes, all the Doctor Who you can shake a sonic screwdriver at. 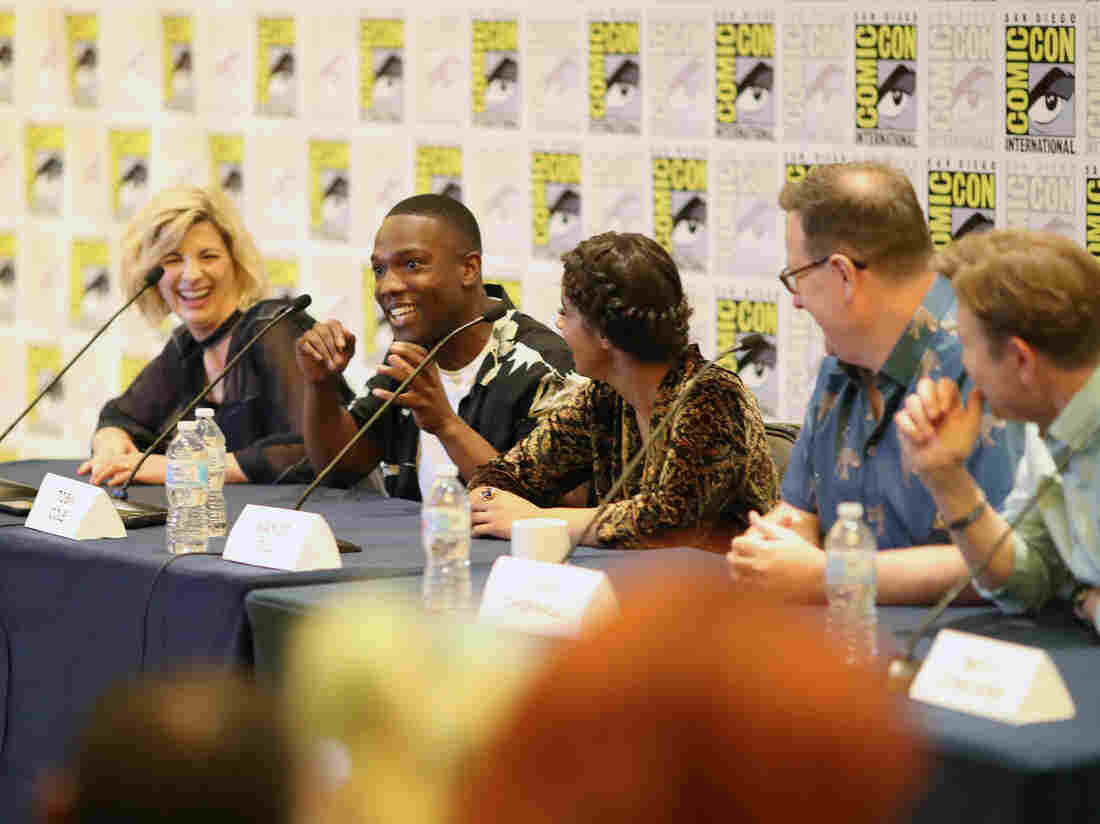 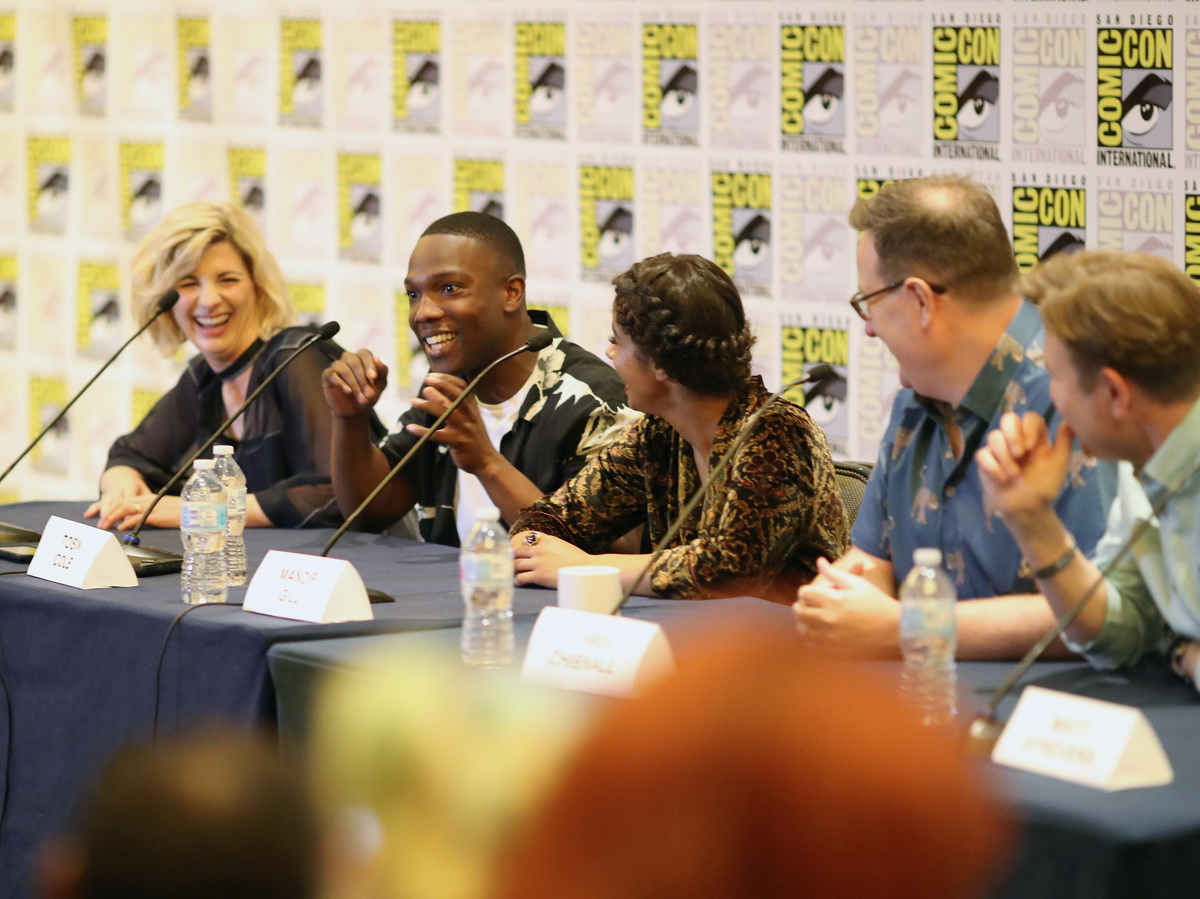 Petra: Today is Thursday, but as far as I'm concerned, it's Doctor Whosday, and I'm starting the day by going to BBC America's press conference for their flagship show, and then ... and then ... I get to go on my first-ever trip to the famous, possibly infamous, Hall H, where only the biggest of wheels roll through. At the press conference, I spotted my very first Doctor of the con, a girl dressed up as Thirteen — who turned out to be the extremely impressive 10-year-old reporter Lindalee Rose of Lindalee's Doctor Who Review. I think she mighta been a little irked that I didn't know who she was, but she hid it well.

The audience asked the expected questions about what it's like to be/cast/write for the first Lady Doctor, and I thought showrunner Chris Chibnall had pretty good answers. "The Doctor's still the Doctor," he said. He said her gender might come up in historical contexts, but, he added, "I'm not sure that's a gender-related issue, certainly not for the way we're writing it and the way it's being performed. The Doctor is that character who can walk into a room and, through force of personality, force of charm, force of being amazing, totally bend everybody to their will, solve the problem, defuse the bomb, make everybody happy, get out alive."

Jodie Whittaker, the Doctor herself, said she's looking forward to the day when "woman" isn't a genre, when women are just part of a cast. And when Lindalee asked her what kind of woman's touch she'd bring to the TARDIS, she said, "I have never approached anything thinking, 'How would a woman play this role?' Because I just am one, and I don't know if a guy has ever gone, 'How would a guy do this scene?'" Nice deflection, there, because of course, Whittaker's not actually allowed to say anything about the TARDIS, the Doctor's time and space machine — which, notably, blew up at the end of last season.

The most entertaining thing about the press conference, in fact, was watching everyone up at the table dance around revealing any new information at all. Chibnall sidled up close to admitting there'll be a Christmas episode, but that was as much news as we got. It became a running joke — at one point, I heard a plaintive voice from the audience start to ask a question and then veer off with "You're going to say no again." "Yes, but I'll say it nicely," Chibnall shot back.

Outside, we lined up to wait for the panel by the press door to Hall H, wilting faintly in the bright sun — which will be important in a minute, because damn, they don't tell you how dark Hall H is. That led to a bunch of suddenly blinded reporters milling about, bumping into each other, trying to find the press seats.

The crowd roared when the introductory video began on the big screen above the dais — and I admit I got a little teary too, seeing so many other people feeling strongly about the new Doctor. (Okay, okay, I feel strongly about her too. Would I have liked to see an actor of color in the role? Heck yeah, and I hope they do that next. But OH GOD THE DOCTOR IS A LADY AND I FEEL SO SEEN.) There was even less news out of the panel than out of the press conference, but one lovely revelation was the genuine chemistry between Whittaker and her new companions, Tosin Cole and Mandip Gill. The two of them had been quiet at the press conference, but up in front of Hall H, they got a chance to shine. Cole's impressive chill (he rolled his eyes at Whittaker at one point, and she punched him in the arm), Gill's wide-eyed excitement and the way they all three collapsed into each other at one point about some private joke all makes for a family I want to see traveling in time and space.

I have to run to a signing ... but I'll just say this: Tomorrow is COSPLAY DAY. Take it away, Mallory!

Mallory: I started the day with an exclusive screening of the first episode of The CW's Charmed reboot (set to air sometime this fall) and a panel discussion. I was never big into the original series, but I was intrigued because the leads were all Latina actresses, and I've been craving something fun and frothy, so I figured, why not? That's why I'm here. I wasn't expecting to be quite so — well — charmed by it.

After the tragic and mysterious death of their mother, college students Mel (Melonie Diaz) and Maggie Vera (Sarah Jeffery) discover they have a half-sister named Macey Vaughn (Madeleine Mantock). Their powers awaken: Mel can freeze time, Maggie hears people's thoughts when she touches them, and Macey teleports objects. They learn that they're witches, and that demons are after them. (That's not a spoiler, because why would a show be called Charmed if it weren't about witches?)

It's about much more than that, though. Melonie Diaz said, during the panel discussion after the episode, "There's so much happening in our world, so our show can reflect that." With a pilot episode whose main villains are, in as many words, toxic masculinity and sexual harassment, and which contains a running joke about consent, it's pretty clear that the show is ready to tackle those issues (and more) head-on. I won't say too much more about the episode itself, but it's a fun soapy pilot for what seems like a fun soapy season, tailor-made for a young female demographic with an interest in the occult.

I'm always on the lookout for queer representation — the good kind of queer representation, where it's written canonically into the show and isn't just revealed as queer after the story's concluded (cough, like Dumbledore, cough). Charmed delivered. Diaz's Mel is a lesbian, working through relationship issues with her ex-girlfriend in the wake of her mother's death, and the two share an on-screen kiss. In the first episode. Between two women of color (one of whom is an Asian woman). It's the kind of kiss that would have blown my mind when I was thirteen — blown my mind in that "I can kiss girls too?" kind of way. Maybe that's all the media I've been consuming lately, but I'm okay with that. It's still validating to see this part of myself presented so casually in a network show.

Producer Elizabeth O'Toole said it felt "natural" to have LGBT representation on the show. "Yeah, [Mel's] gay. Representation is important, and it doesn't feel like the real world to not have that." Diaz added that seeing same-sex couples should be normal. "Two people loving each other, and that should be it. I'm excited to be part of a show taking that to the next level."

But everyone on the panel, series producers and leads, stressed how true they were hewing to the original Charmed series. Sarah Jeffery, who plays Maggie, said, "We wanted to honor it while bringing a modern twist. Come join us! See if you like it."

Later in the day, I tried one of the "fan experiences" that Marvel's new Cloak & Dagger show brought to Comic-Con, which mimicked a scene in the first episode. When the two lead characters meet and touch hands for the first time, their powers explode, sending the two flying backward, and the experience was meant to bring that to life. How could I pass that up?

Participants are warned that they shouldn't have health issues like motion sickness, head/neck/shoulder issues, etc that could be exacerbated by the stunt and, after waiting in line (of course), and signing a liability waiver (also of course), my girlfriend and I were strapped tightly into harnesses and led "onto set."

"This is a real stunt, okay," one of the ride technicians said solemnly as he hooked me to a cable, "a real stunt, just like in the movies. The number one rule is Do Not Touch Each Other."

We were instructed to reach out our hands — like in the show, but Definitely Not Touching Each Other — and on the count of three, the bungee was released and we were jerked backward away from each other. The resulting video does look pretty cool, I have to admit, so it was worth the potential risk.

The video of the Very Real Stunt Just Like In the Movies - as performed by Young Avengers Kate Bishop (myself) and America Chavez (@dogunderwater).#CloakAndDaggerSDCC #SDCC cosplay pic.twitter.com/iXSNqyRLTC

Petra and I are both cosplaying tomorrow, so watch out for it!