Accessibility links
Trump Administration Defends Campus Sexual Assault Rules Government lawyers were in federal court Thursday for a hearing in a lawsuit over guidelines that would allow schools to demand a higher standard of evidence, making it tougher to prove an assault. 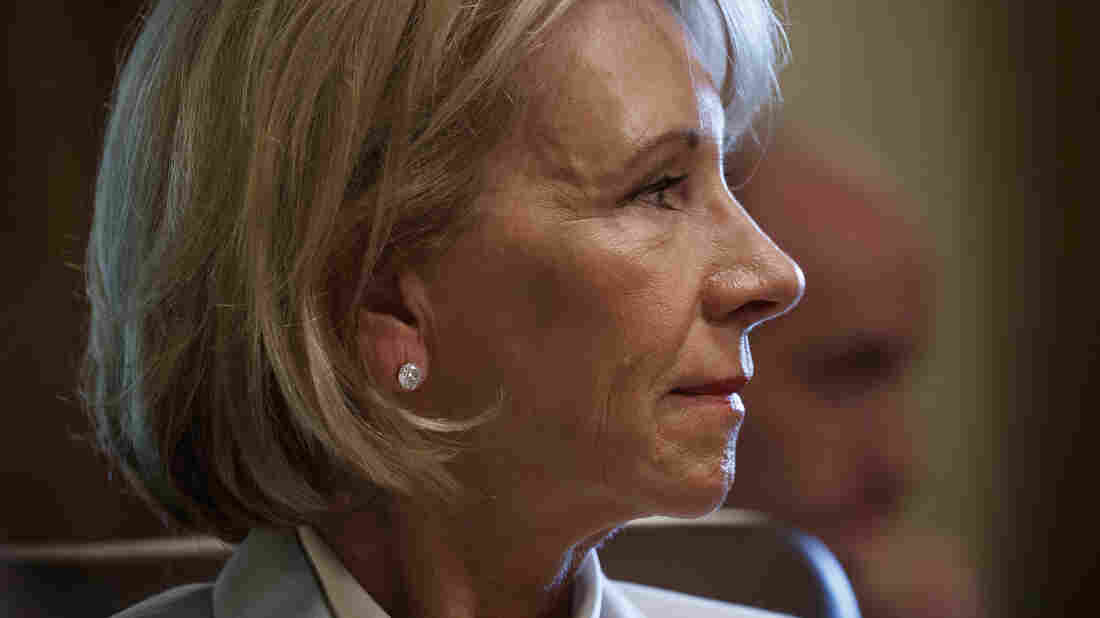 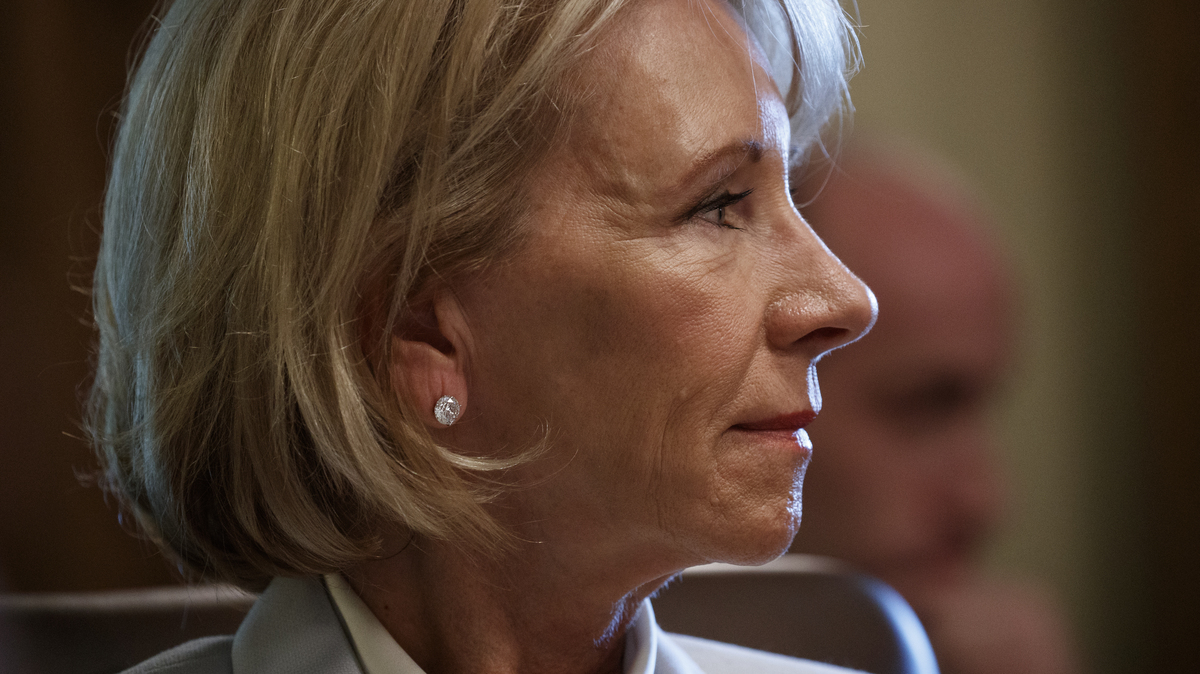 Trump administration lawyers are defending their new rules on how campuses should handle cases of sexual assault. Education Secretary Betsy DeVos issued the new guidance last fall after scrapping Obama-era rules that she said were forcing schools to violate the due process rights of the accused. Survivors' advocates filed a federal lawsuit shortly after, arguing DeVos' replacement guidelines discriminate against accusers and discourage them from reporting assaults.

"The message that is sent is that the administration believes that women who report sexual harassment and violence are liars," says Jennifer Reisch, legal director of Equal Rights Advocates, one of three groups that brought the lawsuit. She spoke to reporters Thursday after a hearing on the lawsuit at the U.S. District Court in San Francisco.

DeVos' interim guidelines allow schools to demand a higher standard of evidence that would make it tougher to prove an assault, permit schools to hear appeals only from the accused, and let investigations go on for an indefinite amount of time.

None of that was allowed in the Obama era.

The prior administration also used to require schools to protect alleged victims during investigations; now that is at schools' discretion. And the old norm of making the accused student stay away from the accuser is now considered unfair. Schools are supposed to be evenhanded — prompting some to rely on "no-contact" orders that apply to both students. But Reisch argues that putting the onus on alleged victims unfairly punishes them by restricting where they can go and live.

"It is sending a message that you come forward at your peril," she says.

Robin Thurston, a senior counsel for the Democracy Forward Foundation and one of the attorneys bringing the lawsuit against the Trump administration's guidance, says, "Survivors are being chilled from coming forward."

"The guidance harms women," Thurston says. "And we think there's really significant evidence that the decision-makers at the Department of Education were motivated by a view that women and girls in general make false accusations of sexual assault. And the law is very clear that if the government was motivated by a discriminatory mindset, that's unconstitutional."

Campuses Cautious As They Adjust To New Sexual Assault Guidelines

The lawsuit cites public comments by DeVos that plaintiffs say exaggerate the problem of false accusations. It also points to a comment from the then-acting Assistant Secretary for Civil Rights Candice Jackson, who told The New York Times last summer that she believed "90 percent" of campus sexual assault allegations are really just about drunk sex or morning-after regrets. Jackson later apologized for the "flippant" remark, insisting it poorly characterized her actual beliefs.

The lawsuit also cites comments from President Trump, who has dismissed women who've accused him as "phony accusers" who out for "some free fame."

"This discriminatory and stereotyped view of women and girls has become formal White House policy," the suit argues, and the "administration's animus toward woman gives license to ... Executive branch decision makers who share the same discriminatory views."

Government officials declined to comment on pending litigation, but in court papers, attorneys argue that a "handful of statements" do not prove "sexism" or discriminatory intent. They argue the case should be thrown out on procedural grounds because the plaintiffs haven't sufficiently established that they were harmed by the new guidance and because the guidance is only temporary anyway.

Defense attorney Justin Dillon, who represents students accused of sexual assault but is not involved with the case, calls it "completely frivolous." 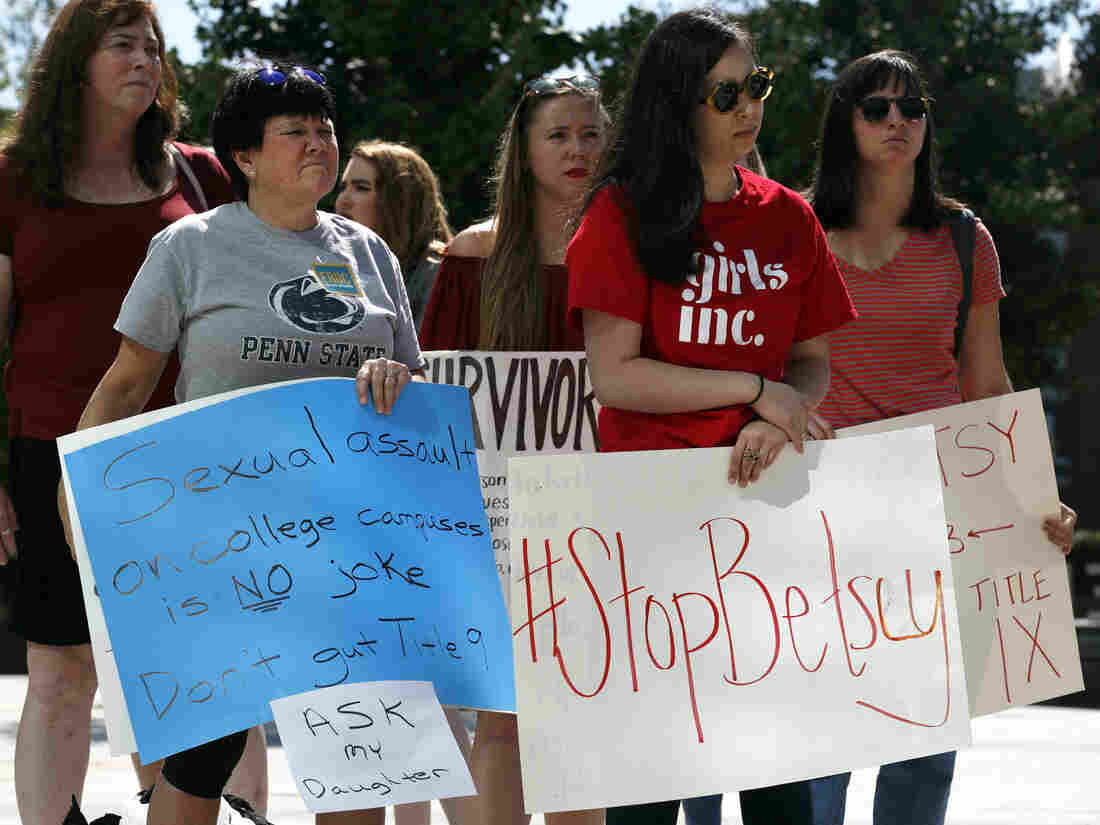 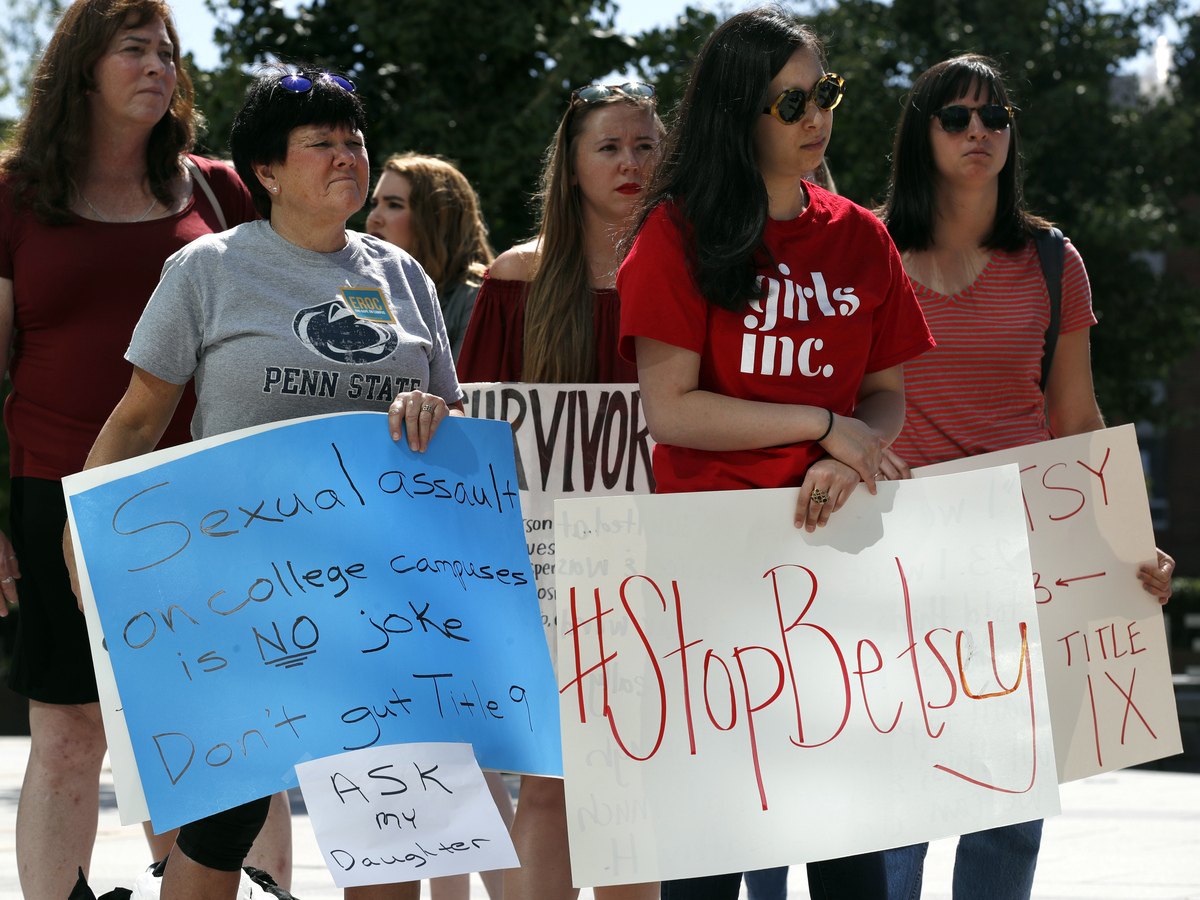 Sonja Breda, 23, (right) sends a message to Education Secretary Betsy DeVos with a "Stop Betsy" sign as survivors of sexual violence and their supporters protest before DeVos spoke in September 2017 at the George Mason University's Arlington, Va., campus.

Dillon was the lawyer who sued the Obama administration in 2016, arguing its guidance was unlawful because it didn't go through the proper approval process. But he says that case was different because it specifically named a student and a school harmed by the policy. That lawsuit was withdrawn after the Obama-era guidance was revoked by the Trump administration.

Dillon calls DeVos' September 2017 guidance a "good tonal shift, and a good signal to universities that the era of ignoring due process is over." While he says he is disappointed that it hasn't yet sparked more changes in campus policies, he says campuses that are making changes are making things more fair.

For example, he says that DeVos' new rules protect students from being "ambushed" without knowing the charges or evidence against them and that interim measures now tend to be less "draconian." And if not, Dillon says, the new guidance makes it easier to assert accused students' due process rights, as happened when a school kicked one of his clients off campus while an investigation was still pending.

"I went to them and cited the guidance and said, 'You can't do this, you're interfering with his education,' " he recalls. "And in that case, I was able to persuade them to let him back on campus."

For schools, the change has brought some measure of confusion. Most are taking a wait-and-see approach, as DeVos is expected to propose permanent rules this fall. It may take until the end of the school year, or longer, for those rules to be finalized.

In the meantime, campuses continue to face lawsuits from alleged victims and increasingly successful legal challenges from accused students.

"In a lot of ways, it does feel like you're a bit caught in the middle," says Martha Alexander, executive director of the Office Of Institutional Equity and Equal Opportunity and Title IX coordinator for the University of Kentucky.

The university just changed its policy in June. It keeps the standard of evidence low, but Alexander says, "To make it a more balanced policy to make sure all parties had a fair shot," it builds in more due process protections for accused students. Hearing panels now need to be unanimous when finding a student at fault, and only accused students are now allowed to bring appeals.

"I think that this policy, and these changes, really is a step towards getting to a more fair system," Alexander says.

Many campuses say they welcome what they see as more freedom to set rules as they see fit, with less onerous oversight from the government.

Peter McDonough, vice president and general counsel for the American Council on Education, a group that represents college and university presidents, says many college presidents are no longer operating in constant fear of the Department of Education's Office for Civil Rights, which oversees enforcement of Title IX, the federal law that bars gender discrimination in education.

Back in the days of the Obama administration, when an individual student complained to the OCR about his or her school, the office would not only investigate that case — it would automatically trigger a systemic investigation of the school, checking for anything else that might be amiss, which could take years. Campuses felt investigations would stay open "until something was found," McDonough says, which was viewed as a "gotcha approach."

Under the Trump administration, a student complaint to the government is treated more like an isolated incident. McDonough says schools now see the government as more ally than adversary.

But Catherine Lhamon, assistant secretary for civil rights in the Department of Education during the Obama administration, says the OCR must be more aggressive in trying to uncover whether schools are handling all cases fairly.

"If the government only investigates [complaints that a student] thinks to bring to the government, the government's not doing its job," she says. "And I worry every day that [schools are getting] effectively a pass on complying with the law. And that will ruin young lives."

But if the Trump administration's approach prompts some schools to ease up on how they handle sexual assault cases, it's also already prompting others schools to double down, according to Andrew Miltenberg, an attorney who has represented hundreds of accused students.

"It's driven very much by personal politics ... as opposed to institutional policy," he says. "There has been a very palpable sense of, 'Hell no! Women have rights, and I'm not turning around and changing how we treat rape victims just because we have Donald Trump as a president.' I've heard it too many times to discount."

Miltenberg says policy corrections are needed, but they must be consistent and measured. Campuses that flout due process protections are as troubling, he says, as schools that are now meting out probation for offenses that used to get expulsions.