Accessibility links
Now A Museum, This USSR Submarine Base Was Built To Endure U.S. Nukes — And Retaliate A once-secret underground naval base in Crimea designed to preserve Soviet submarines in case of a nuclear attack is now a museum with an anti-American message. 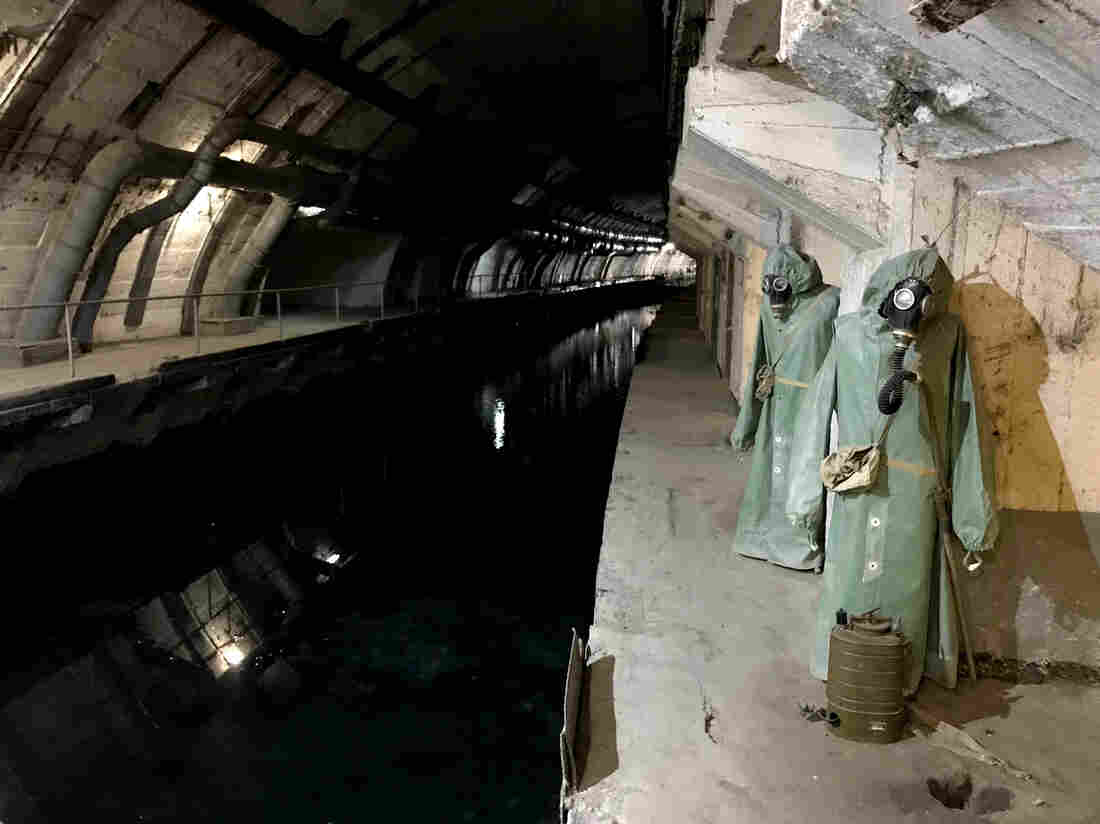 Hazmat suits hang next to the canal that leads from Balaklava Bay to the heart of the underground base. Lucian Kim/NPR hide caption 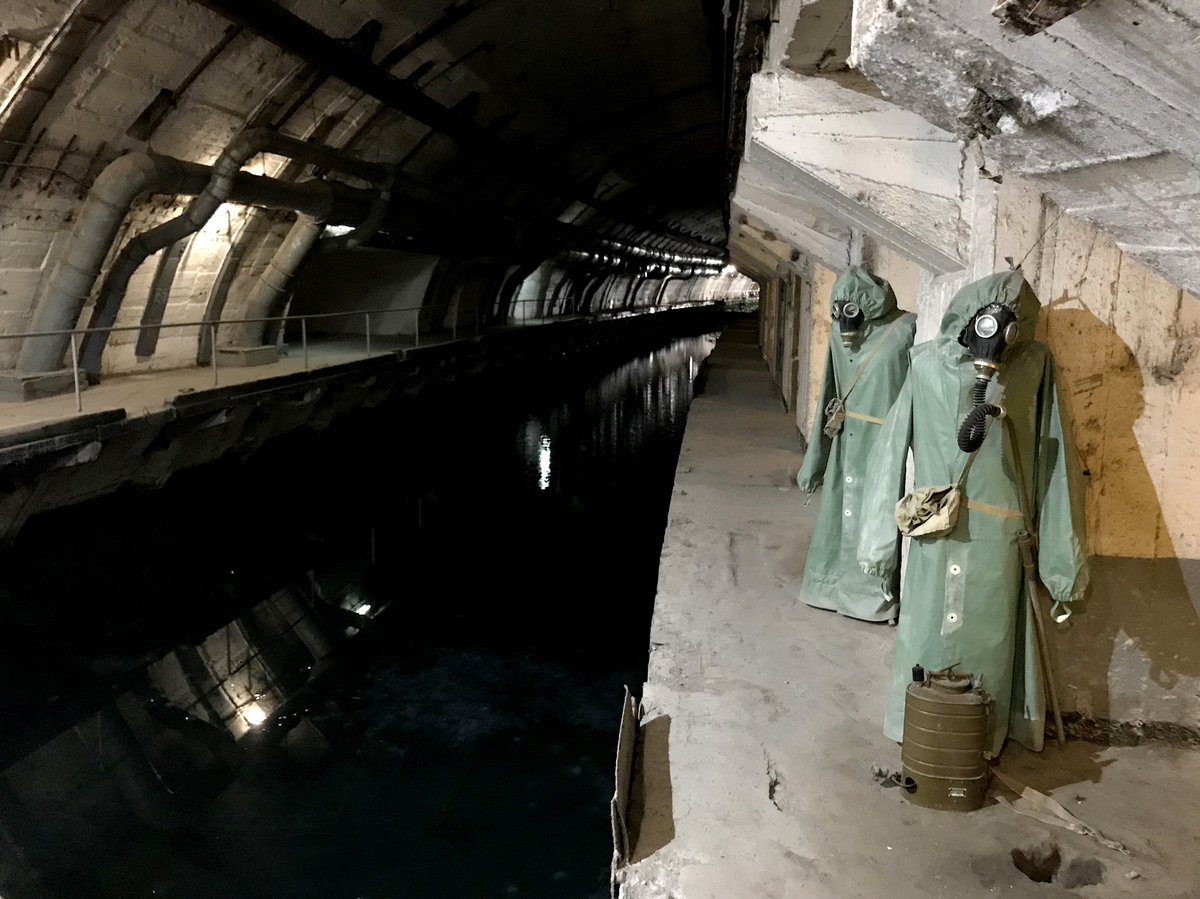 Hazmat suits hang next to the canal that leads from Balaklava Bay to the heart of the underground base.

Today, white yachts bob on the turquoise surface of Balaklava Bay, a quiet inlet hidden from the open waters of the Black Sea. But 30 years ago, the bay was a restricted military zone, filled with submersible giants of the Soviet navy.

Located on the southwestern tip of the Crimean Peninsula, Balaklava is a suburb of Sevastopol, a strategic port that Russia has used to project power across the Black Sea and beyond for more than 200 years. During the Cold War, Balaklava Bay was home to a top-secret submarine base designed to survive a U.S. nuclear strike — and then deliver a retaliatory blow.

Yury Tarariyev served as a captain in the Soviet navy's 14th Submarine Division, which was based in Balaklava. During his lifetime, he saw Crimea go from being the Soviet Union's "unsinkable aircraft carrier" to Ukrainian vacation resort to occupied Russian military stronghold. The base is now a museum and Tarariyev, its director.

"When we went out to sea, we took nuclear warheads on board and were ready to use them if ordered to," he said.

Then, after 15 years of service, he saw the Soviet Union fall apart — and with it, its mighty military machine. Tarariyev says he had tears in his eyes when the last submarine took to sea from the Balaklava base in 1992. 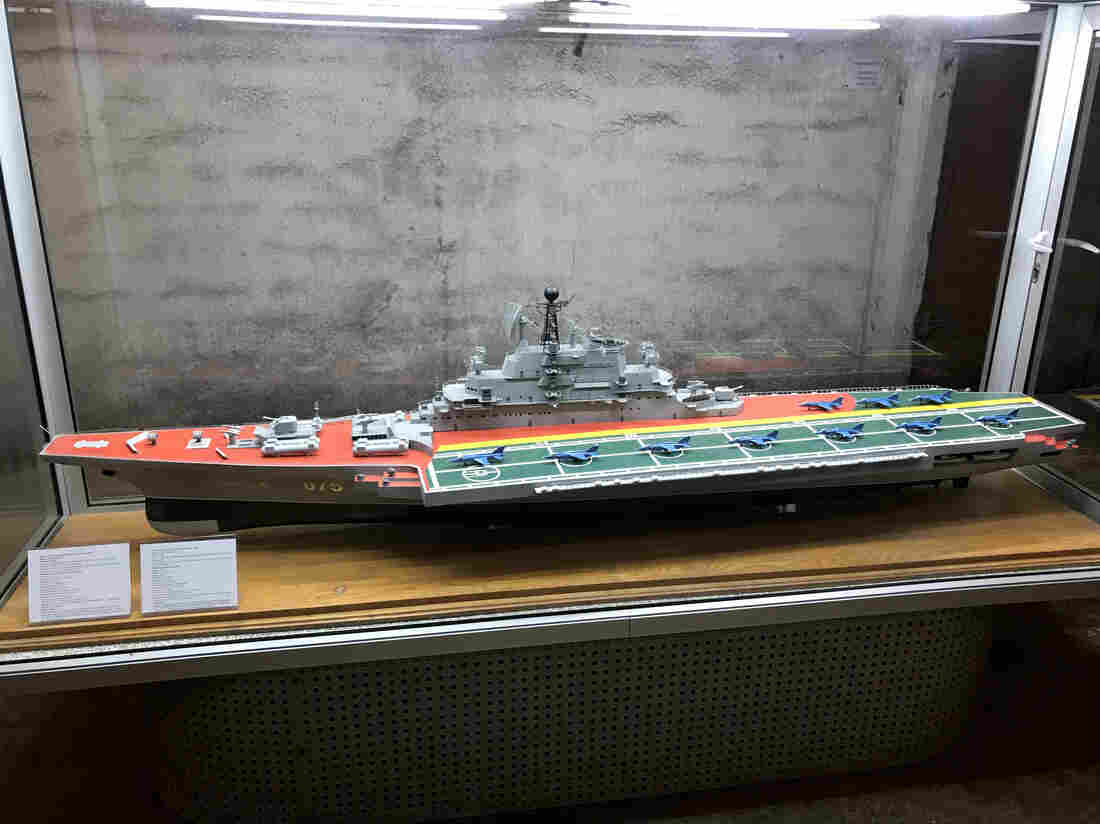 A model of the Kiev aircraft carrier is on display in the museum. Today the Soviet warship is a theme park in China. Lucian Kim/NPR hide caption 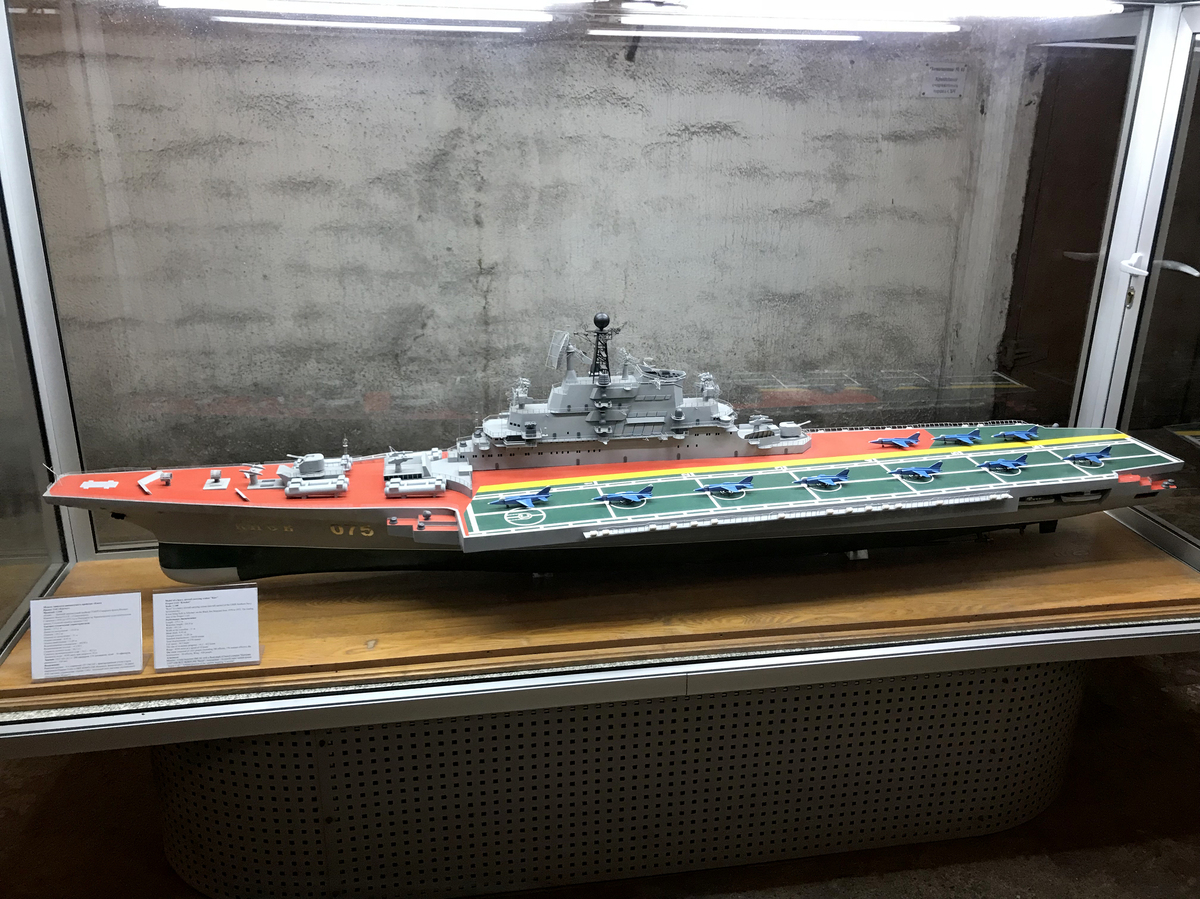 A model of the Kiev aircraft carrier is on display in the museum. Today the Soviet warship is a theme park in China.

Crimea had suddenly become part of independent Ukraine. Although Russia ended up keeping most of the Soviet Black Sea Fleet, it had to lease Crimean naval facilities from the Ukrainian government in Kiev. Built 400 feet under Mount Tavros, the underground base in Balaklava Bay fell into disrepair and was plundered for scrap metal before it became a museum in 2003.

Like many Crimeans, Tarariyev cheered Russia's takeover of the peninsula in 2014 after protests in Kiev brought a pro-Western government to power. At the time, Russian President Vladimir Putin justified the annexation by saying it would prevent Crimea's naval bases from falling into NATO's hands.

Such reasoning resonated with locals whose lives were tied to Crimea's storied military past, which predates its history as a Ukrainian territory. Foreign invaders besieged Sevastopol twice in the span of a century, and Tarariyev's father helped liberate the city from Nazi invaders in 1944.

"Thank God that everything is back to normal, and Crimea and Sevastopol returned to their home port," Tarariyev said about the Russian annexation.

In a matter of days in early 2014, Russian troops fanned out and occupied the Crimean Peninsula using the bases of Russia's Black Sea Fleet as staging areas. A hastily arranged referendum — held under Russian occupation and in violation of Ukrainian law — was supposed to give the land grab the sheen of legitimacy. It was the first time since World War II that one European country had seized territory from a neighbor. Ukraine was too weak to resist, and Western countries didn't want to risk more than imposing economic sanctions on Russia.

After the annexation, Tarariyev's museum came under the control of the Russian Defense Ministry, and a portrait of Putin went up at the entrance.

Visitors access the former subterranean base next to a canal that leads from Balaklava Bay into the heart of the mountain. A giant metal gate weighing 165 tons would have sealed off the base during a nuclear war and withstood a blast of 100 kilotons — five times the destructive power of the U.S. atomic bomb dropped on Nagasaki.

"Somehow a plane was supposed to penetrate all our air defenses and drop a nuclear bomb here," said Tarariyev. "A mushroom cloud rises up, seawater floods the bay and covers the hilltops, and then a wall of water comes crashing down on this gate, which holds it back." 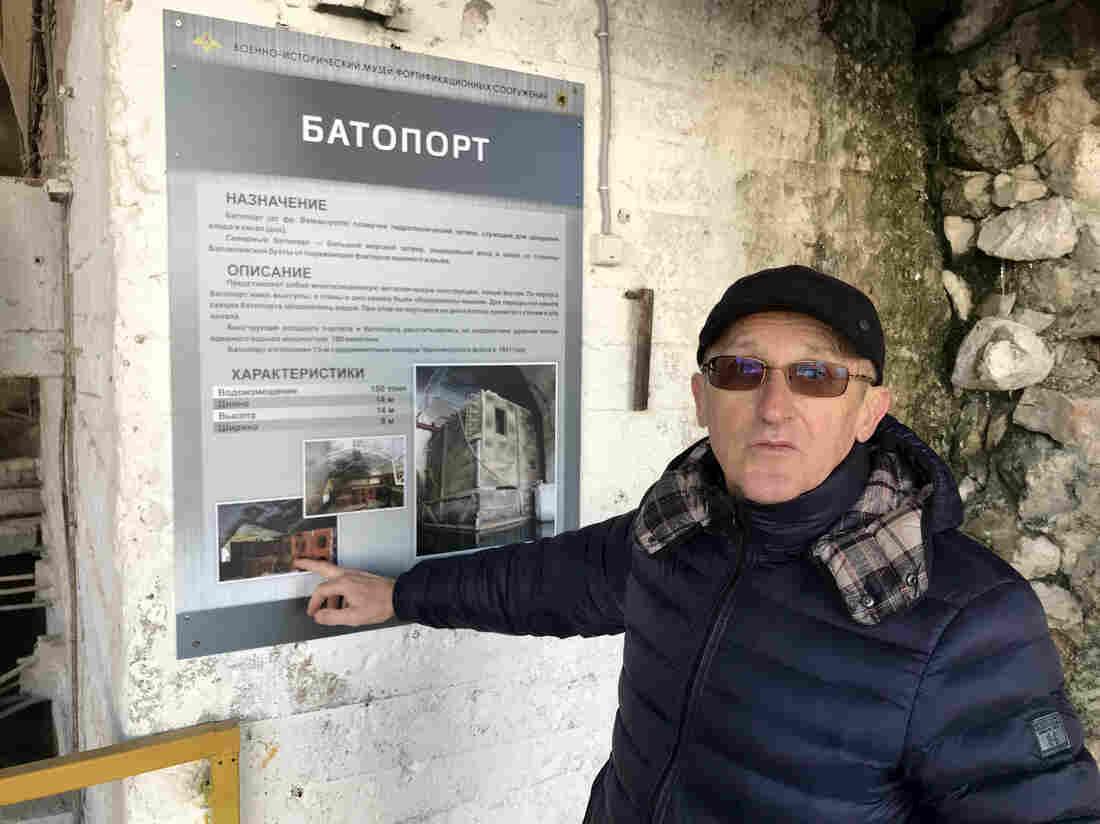 Museum director Yury Tarariyev served as a captain in the Soviet navy for 15 years before the USSR fell apart. He supported Russia's annexation of Crimea. Lucian Kim/NPR hide caption 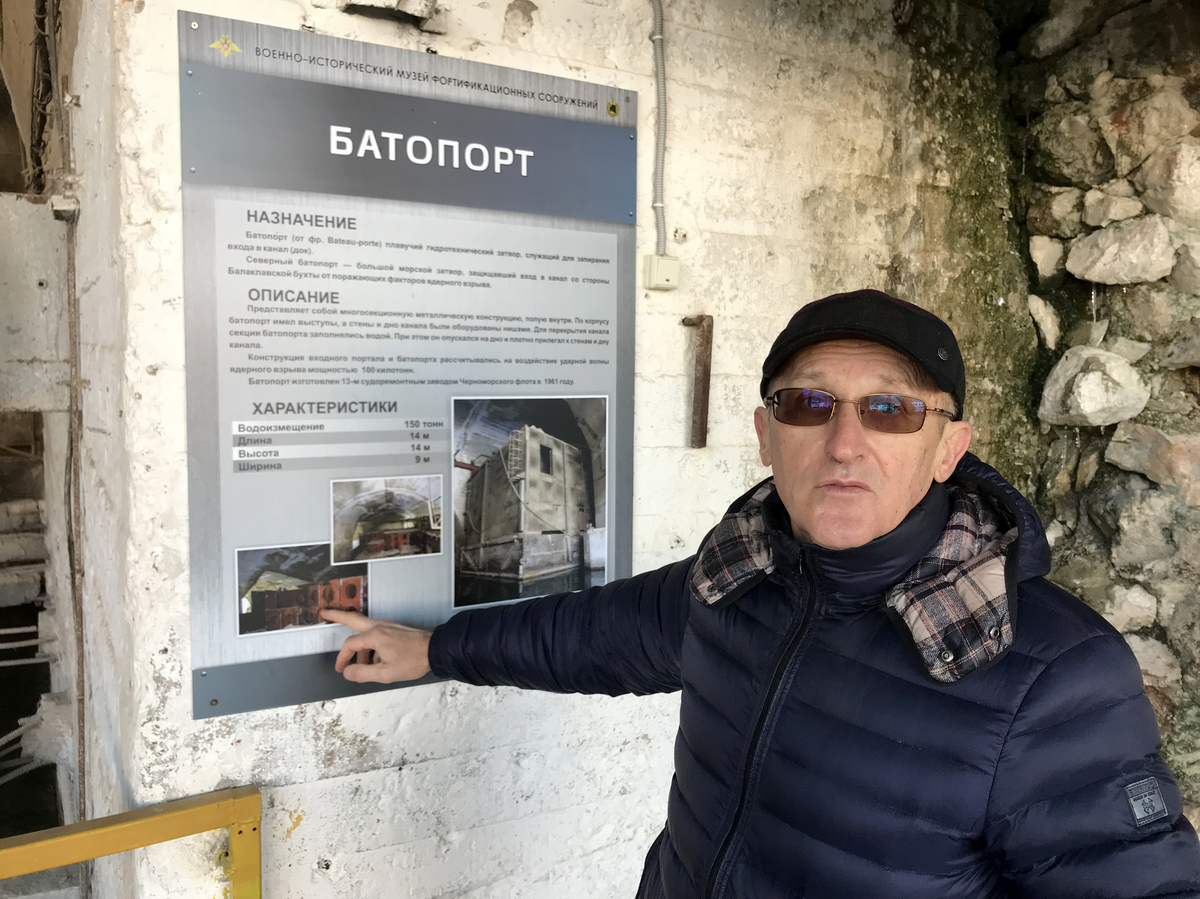 Museum director Yury Tarariyev served as a captain in the Soviet navy for 15 years before the USSR fell apart. He supported Russia's annexation of Crimea.

In times of war, the underground canal could have sheltered up to seven medium-sized submarines. Tunnels connecting the sprawling base were especially curved to deflect blast waves. Enough supplies were stockpiled to last 30 days.

The most secret part of the base was where nuclear warheads were stored before being loaded onto subs. Workers wore special garments to avoid creating static electricity, and the walls were padded to reduce echoes that might cause orders to be misunderstood.

The words "Don't say everything you know, but always know what you say!" are written in Russian on a wall in red paint to remind the workers of the need for secrecy.

The museum's most poignant display is a model of the aircraft carrier Kiev, which was decommissioned after the fall of the Soviet Union and today is the centerpiece of a theme park in China. 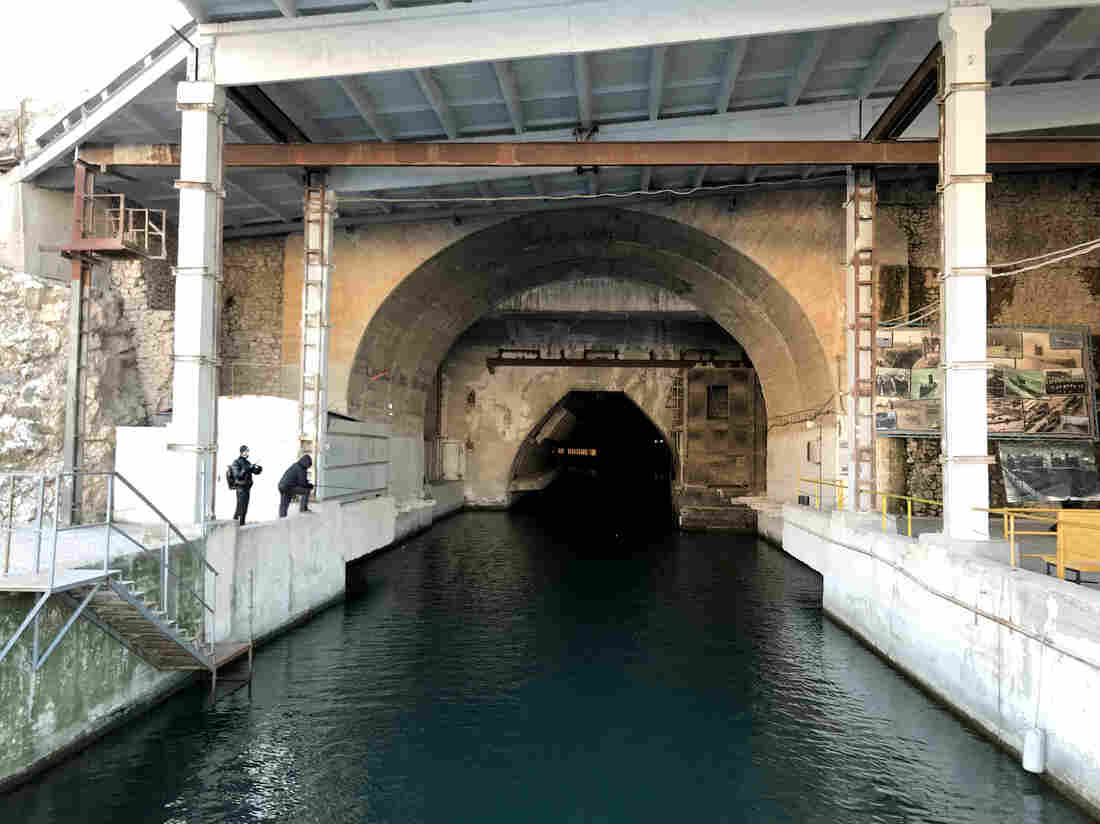 Fishermen cast their lines at the entrance of the once top-secret submarine base in Balaklava Bay. Lucian Kim/NPR hide caption 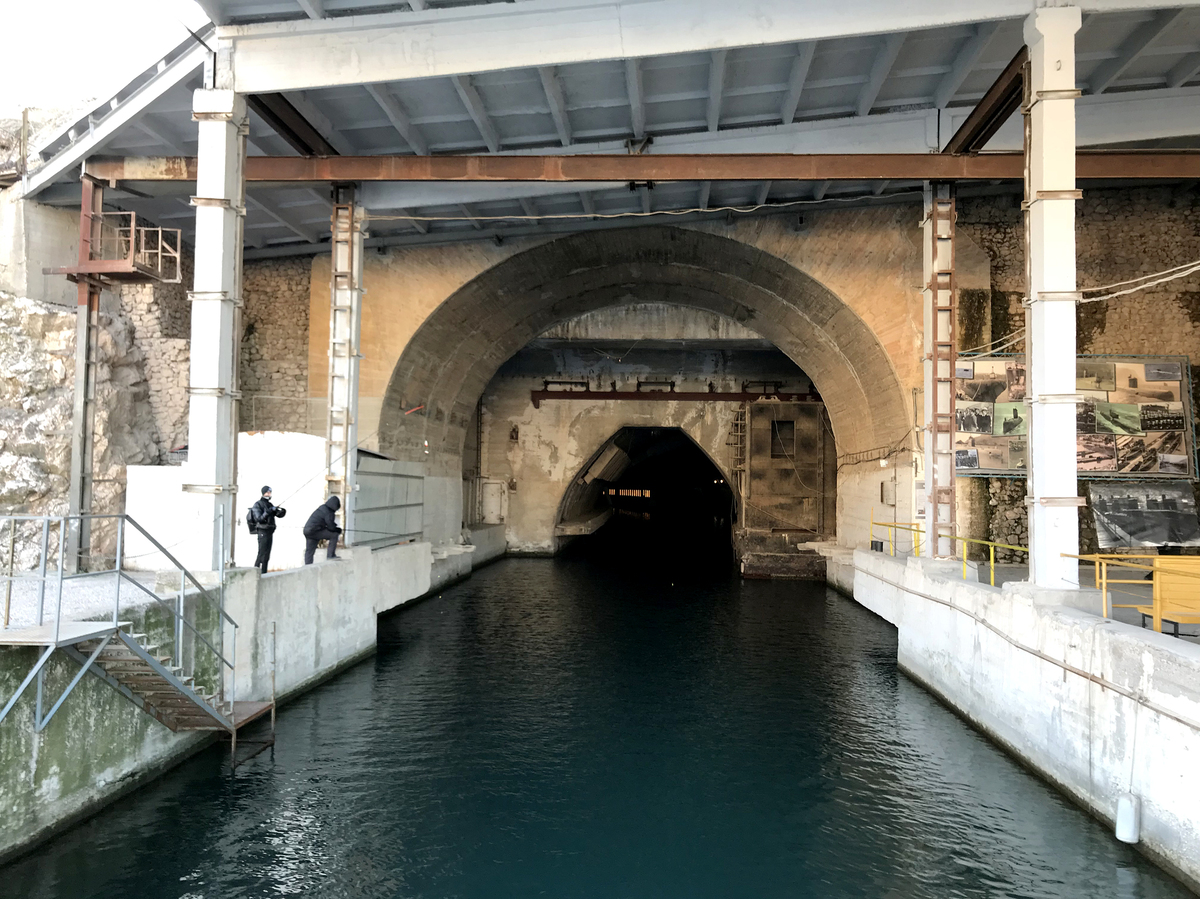 Fishermen cast their lines at the entrance of the once top-secret submarine base in Balaklava Bay.

Now that the museum is funded by Moscow, new exhibits also reflect the hostility between the United States and Russia that was revived after Putin annexed Crimea.

Bathed in red light, one display board about the U.S. attack on Hiroshima and Nagasaki shows Uncle Sam pointing his finger at the visitor next to the giant words "crimes against humanity." Another exhibit details a U.S. plan to destroy the Soviet Union with atomic bombs, justifying Moscow's own nuclear arms development and underground bases like the one in Balaklava Bay.

Tatyana Stepantsevich, a researcher at the museum, says she would prefer the bad old days to remain a thing of the past.

"It's not a good idea to return to those times," Stepantsevich said. "It would be a great idea to be friends and to cooperate rather than to have a war, even if it is a so-called cold war."

Secret submarine bases, she said, are best used as museums.