Accessibility links
Doctoral Student Compiles Database Of Indigenous Women Who've Gone Missing A Southern Cheyenne woman found no solid data on the many indigenous women in the U.S. and Canada who have gone missing or been killed under suspicious circumstances. So she compiled it herself. 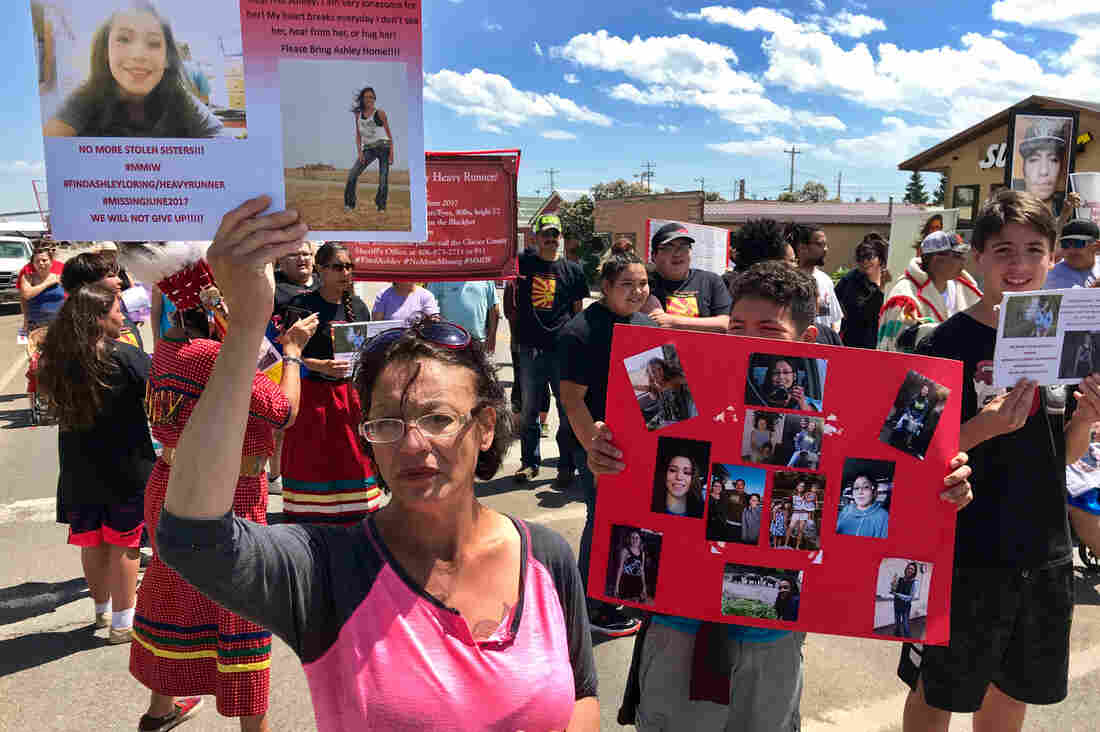 Loxie Loring walks with a group of marchers to remember her daughter, Ashley Loring, who went missing from the Blackfeet Reservation more than a year ago. Nate Hegyi/Yellowstone Public Radio hide caption 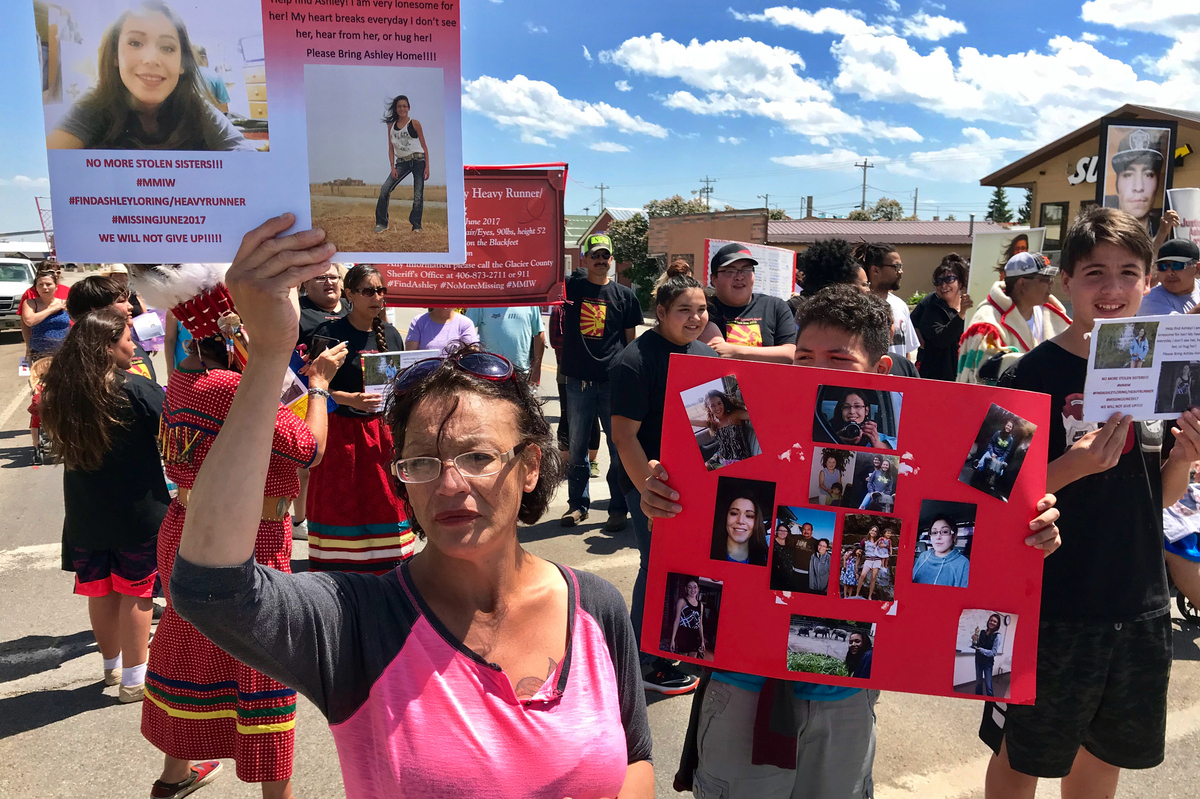 Loxie Loring walks with a group of marchers to remember her daughter, Ashley Loring, who went missing from the Blackfeet Reservation more than a year ago.

A storm rolls in over the Blackfeet Indian Reservation in Montana. The clouds are low and dark as distant lightning cracks over a green prairie. Wade Running Crane is starting to get wet.

"This is like a sign from Ashley that she's here," he says of his family friend Ashley Loring.

Ashley's mother, Loxie Loring, is standing next to him.

"She liked this kind of weather," she says. Her daughter also loved riding horses and writing poetry.

"She was outgoing," Loring says. "She wasn't scared of anything, And for how small she is, she was..."

Then Loxie holds back tears.

Ashley disappeared a year ago. At the time, she was 20 years old and had plans to live with her sister in nearby Missoula, Mont. Law enforcement believes Ashley was then taken somewhere against her will. Now the FBI, tribal police and the Glacier County sheriff's department are all investigating.

"She's not gone because she wants to be gone," Loring says. "I know something happened to her."

Ashley Loring bought a new camera and took this portrait of herself before she went missing from the Blackfeet Indian Reservation more than a year ago. Courtesy of the Loring family hide caption

Ashley Loring bought a new camera and took this portrait of herself before she went missing from the Blackfeet Indian Reservation more than a year ago.

Courtesy of the Loring family

Spend time in Indian Country and you'll hear this story over and over: A niece, a daughter or a cousin who was taken quickly and violently from this world.

As many as 300 indigenous women go missing or are killed under suspicious circumstances every year in Canada and the U.S., but the exact number is unknown because the Federal Bureau of Investigation isn't really tracking the numbers.

"I would venture a guess that if we did have the data, it would show that native women are more disproportionately represented," Annita Lucchesi says.

She used to teach Ashley Loring at the local community college in Browning, Mont.

Lucchesi is a doctoral student at the University of Lethbridge in Canada now. Back when she was working on her master's thesis, she tried to find the total number of indigenous women who were either killed or went missing in U.S. and Canada.

"After doing some Googling, I realized nobody has the right number," she says. 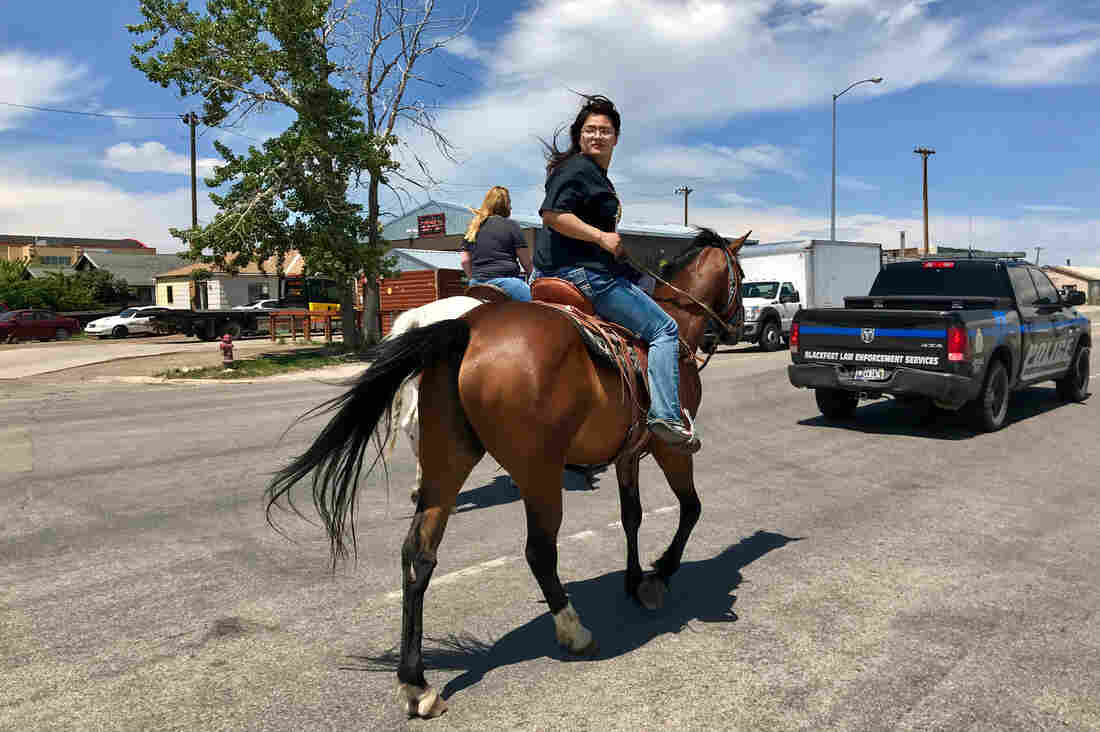 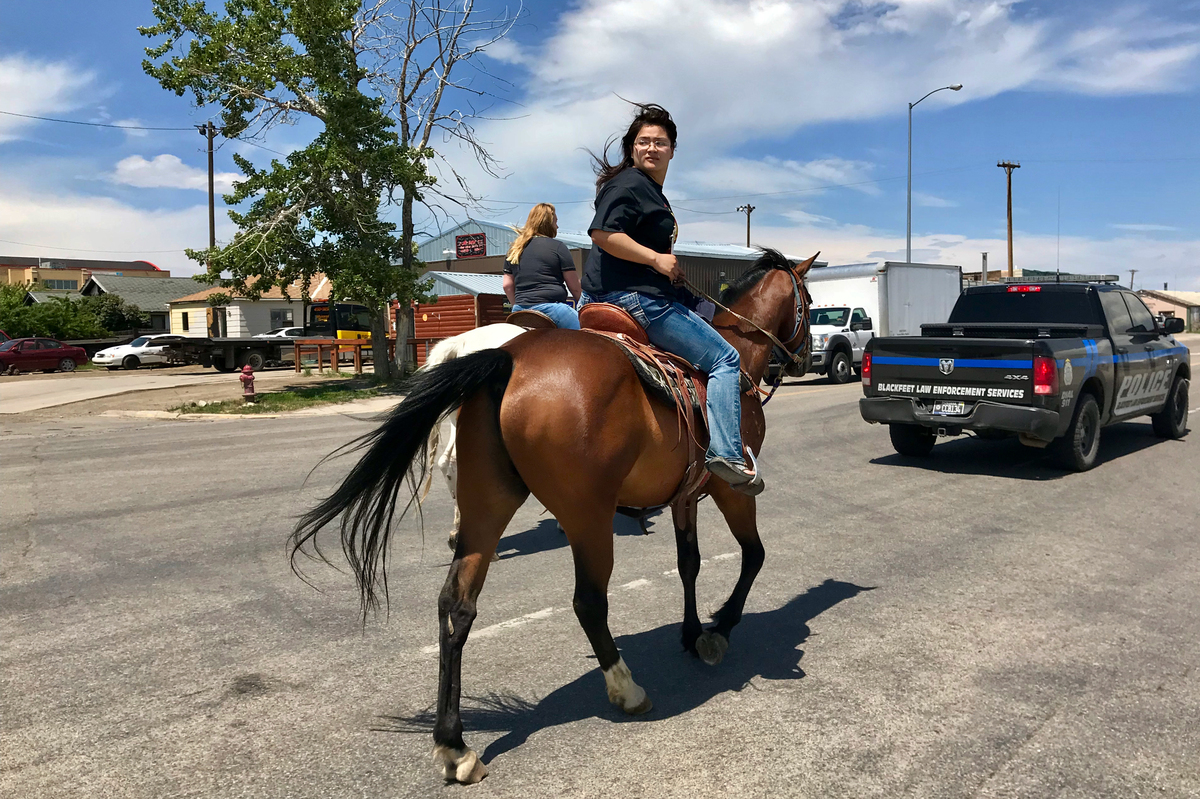 Jonnilyn Loring leads a group of marchers down the main highway in Browning, Mont.

Even if a local police report is filed some of those cases never make it to the FBI's crime database. This is because there's no requirement to file those reports nationally unless the person is a juvenile. Lucchesi says this allows many native women to fall through the cracks.

So she's creating her own database by filing public record requests with local law enforcement agencies. So far she's documented more than 2,000 cases across both the U.S. and Canada. Most occurred over the last 20 years.

Luccessi says she's shocked at how much data is missing.

"And really, it's not just data," she says. "That's someone's relative that's collecting dust somewhere and no one is being held accountable to remember or honor the violence that was perpetrated against her."

Canada has an ongoing federal investigation into the issue but data isn't really getting updated. Last year, Congress introduced Savanna's Act. It requires an annual report on the number of missing and murdered indigenous women, but since a Senate Committee hearing in October, nothing's happened.

Frustration about all this is mounting on the Blackfeet Reservation.

On that recent stormy day, a large crowd called for justice for Ashley Loring as they marched down a main highway blocking traffic.

Ashley's cousin, Ivan MacDonald, marched with them. He's getting weary.

Ashley Loring has been missing for a year, along with an estimated 270 other indigenous women in the U.S. and Canada.