Accessibility links
The Russia Investigations: How Many More Maria Butinas Are There? In a week even Hollywood couldn't have scripted, the feds launch their case against a Russian accused of infiltrating U.S. politics. And the deputy attorney general speaks out on foreign interference. 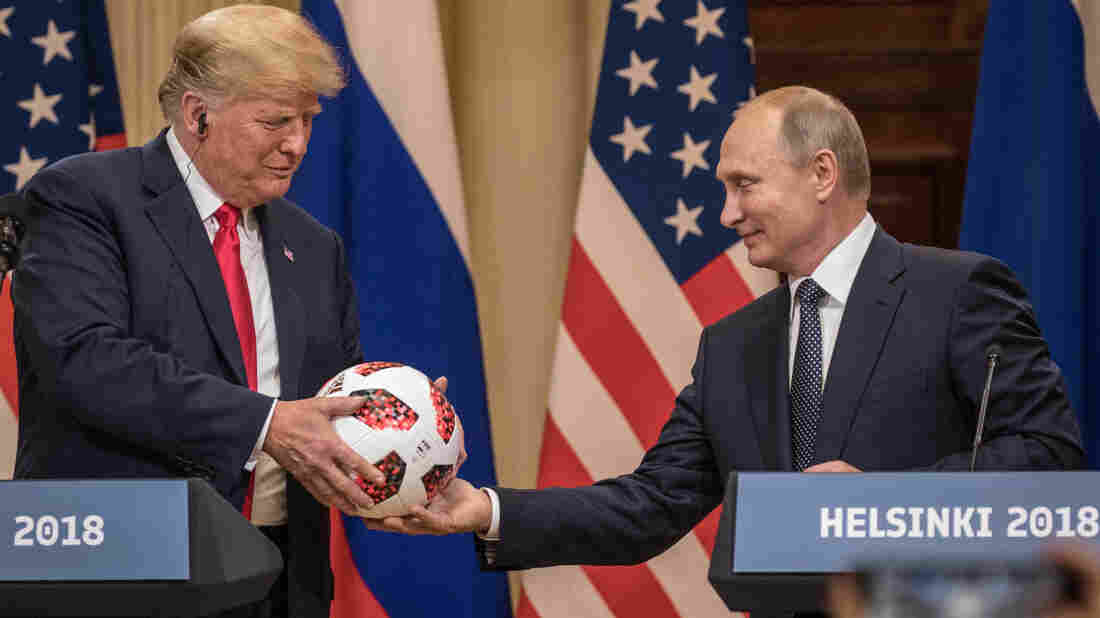 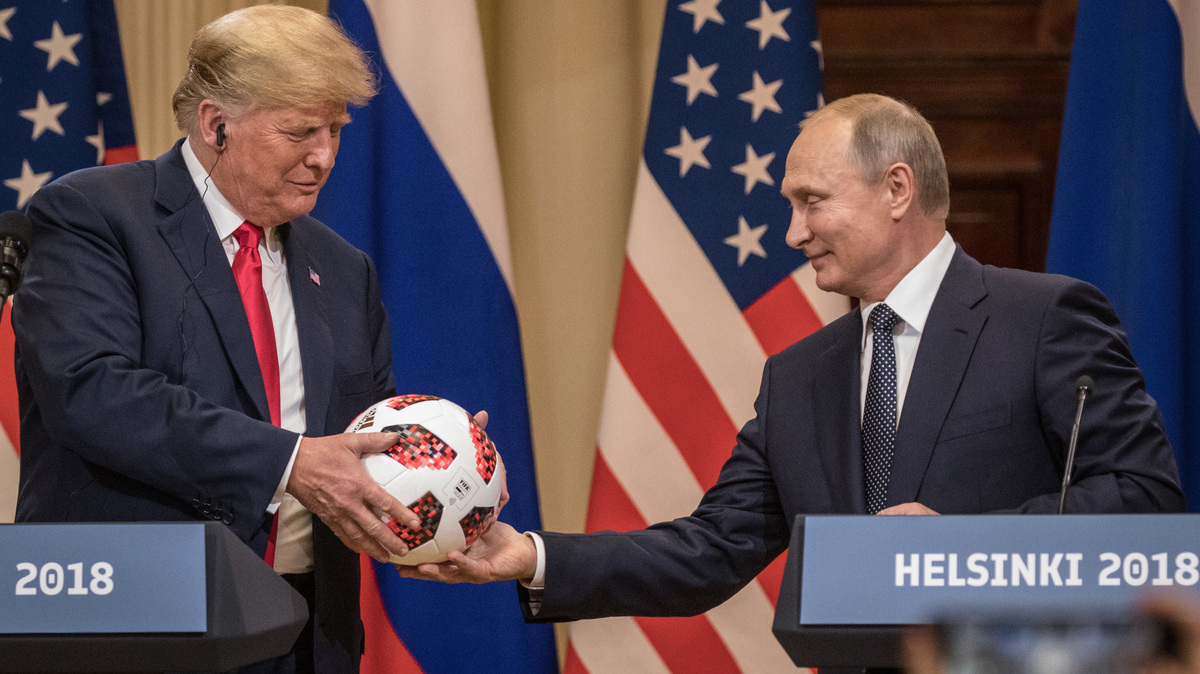 This week in the Russia investigations: Two big questions about the second-most famous Russian in the world and Rod Rosenstein fires a warning shot.

No Hollywood screenwriter could get away with turning in a treatment for this week. The studio bosses would roll their eyes and ask for the story to be more plausible.

And yet Americans — and the rest of the world — really did just live through five days in which the president of the United States publicly sided with the president of Russia against his own intelligence community, then denied that foreign interference threats continue, meanwhile holding open the possibility of making a former American diplomat available to Russian investigators who have traveled to the U.S. to pursue questionable criminal allegations leveled by Vladimir Putin.

Trump's 'No' About Russian Interference Requires Yet More Clarification

The White House now says that what the president meant to say was the opposite of all that: He accepts the intelligence community's verdicts and does not accept the idea of swapping persons of interest to both American and Russian inquisitors.

All that was playing out in the background as another big story in the Russia imbroglio unfurled over the week: the case of Maria Butina.

A federal magistrate judge this week ordered that Butina must be jailed ahead of her trial on charges that she is a Russian agent, one tied to its FSB spy agency and one controlled from her first arrival as part of a deliberate influence campaign against the United States.

Longtime readers will remember the many questions about how "infiltration" might have fit in to the broader campaign of active measures waged by Moscow for several years against the U.S. and the West.

Now some of the answers are coming into focus, based on allegations in court documents filed in Butina's case.

Butina has been traveling to the United States since 2015 and has been living in Washington, D.C., more or less full time on a student visa while enrolled at American University.

She has been making contacts all along with conservative political leaders and via the National Rifle Association and at least one religious organization. With the assistance of a few Americans, she has been making clear all along to people she met that she provides a channel back to Moscow, according to court documents.

Butina's attorney argues that the government's case is overblown. He also denies the charges against her and says the worst crime she has committed is convening a few dinners.

And for as much as the government has said about her in court documents, there are still wider questions about her case and the broader infiltration strategy.

How many more Butinas are there?

Court documents and other evidence unveiled by the government suggest how closely Butina was being controlled. In one FBI surveillance photograph, she is pictured with her fork and knife poised over dinner in a bistro across from a man whose face has been obscured. The FBI says Butina was meeting with a diplomat from the Russian Embassy.

In another exhibit, handwritten notes describe a "Russian Patriots in Waiting organization": What's the green card process? How many Russian expatriates are in the U.S.? How to respond to the "offer of employment" from the spy agency FSB, successor to the old KGB?

Butina's work on building a network appears to have been interrupted at an early stage. In fact, the government's attorneys said she appeared to be preparing to leave Washington — and potentially the country — when she was arrested July 15.

How many other operatives like her are in the U.S.? There has been a suggestion all along about "infiltration" of a number of American political organizations. Butina has had a relatively high profile and been the subject of press reports for months, including by NPR's Tim Mak. Are there other operatives like her who are still flying under the radar, and if so what are their assignments now? 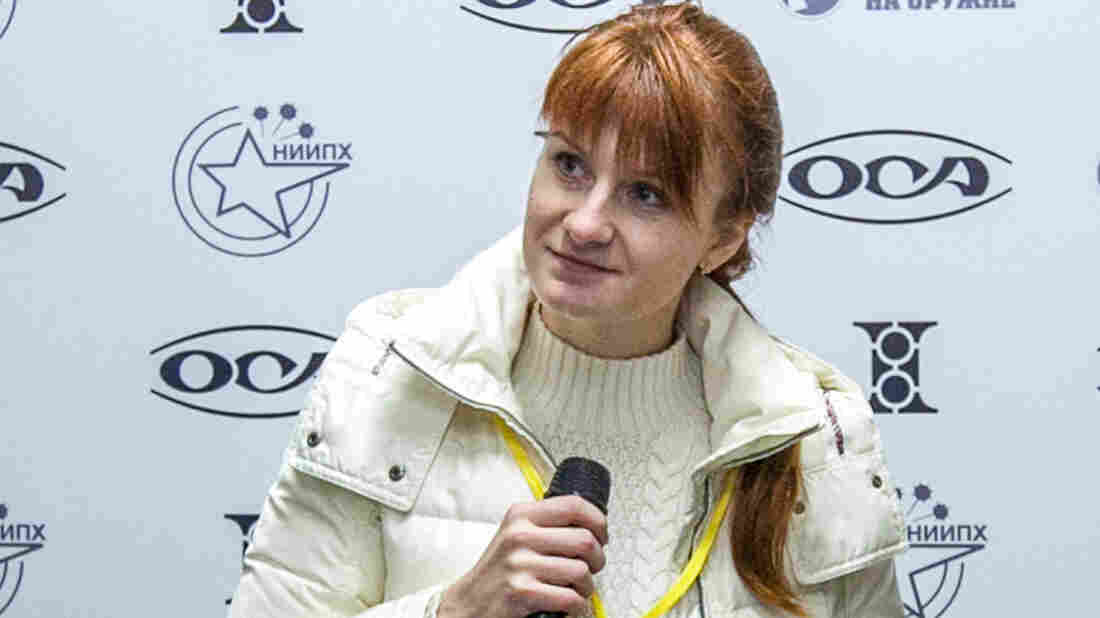 Maria Butina, leader of a pro-gun organization, speaks on Oct. 8, 2013, during a news conference in Moscow. STR/AFP/Getty Images hide caption 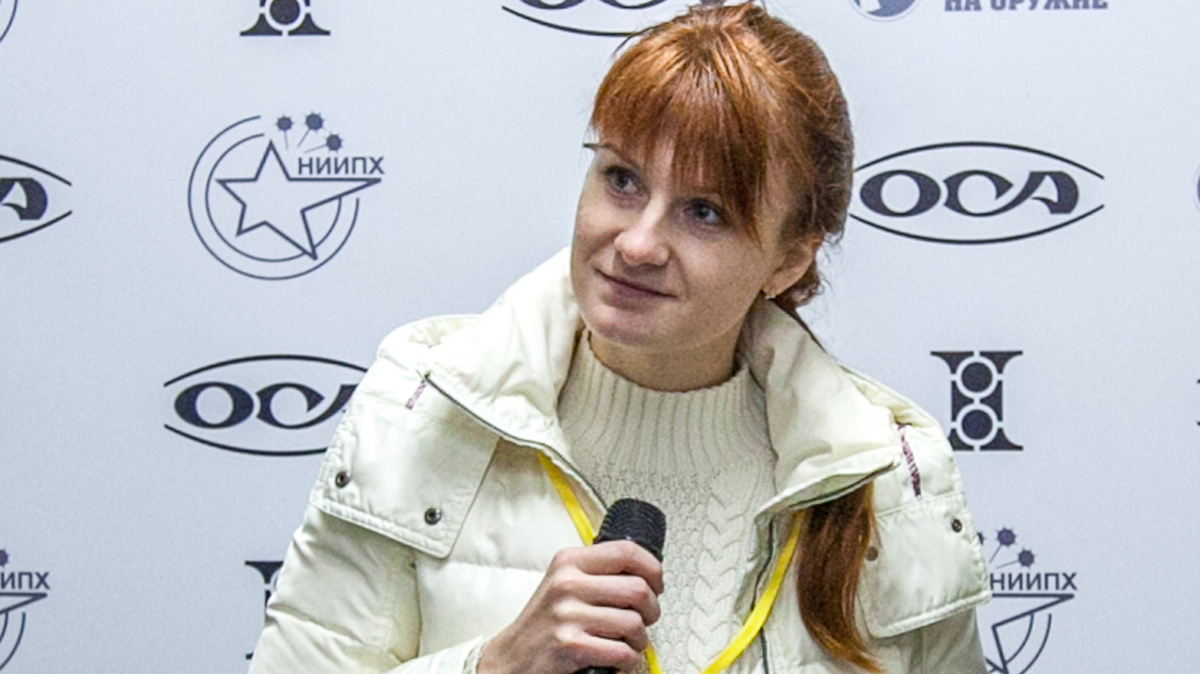 Maria Butina, leader of a pro-gun organization, speaks on Oct. 8, 2013, during a news conference in Moscow.

Did Butina do any spying?

Technically, the Justice Department has charged Butina with conspiring to act as an agent of a foreign government and acting as the agent of a foreign government without prior notification to the U.S. attorney general. There don't appear to be any suggestions that she got access to any U.S. government or other secrets in the way that past suspects have in espionage cases. Her trial will likely be covered as a sensational spy case but, so far, it doesn't appear to involve any spying — though we don't know everything about what she was allegedly doing before her recent arrest.

The most famous antecedent of Butina's case didn't involve the theft of secrets either. A Russian official is quoted in court documents comparing her to Anna Chapman, who belonged to the group of so-called illegals rolled up by the FBI in 2010.

But Chapman and the other operatives in that case, run by Russia's foreign intelligence service SVR, never actually got any secret information either, the FBI said.

Instead, they engaged in what the FBI called "spotting and assessing," looking for targets of opportunity or people who might have been sympathetic. One goal was to "co-opt" them so they'd be useful if one day they took positions of power and influence.

Where might Butina have been engaged in this kind of reconnaissance work? Gun rights conventions, for one. The National Prayer Breakfast, for another. And among other venues, at South Carolina Republican Rep. Mark Sanford's 2017 post-Thanksgiving barbecue, as CNN reported.

Counterintelligence investigators will be looking at all the contacts made in Butina's case to assess how much influence already has been wrought — if any — and how much of this was the planting of seed corn that Moscow expected to reap later on.

Deputy Attorney General Rod Rosenstein is usually one of the more measured, if not taciturn, actors in the Russia saga, but he blasted into the Aspen Security Forum this week like a helicopter gunship.

Week Of Trump Reversals Puts 2018 Election Security In The Spotlight

Rosenstein warned about the ongoing danger of malign foreign influence — significant after the week's back-and-forth involving Trump and Putin — and gave his audience a thumbnail history of active measures targeting the United States.

The Justice Department will do a better job of communicating about foreign interference, Rosenstein said, and he outlined the government's strategy behind using indictments like the one against the 12 Russian intelligence officers as its tool of choice in combating cyberattacks.

Sometimes, there actually are times when the U.S. really can try defendants like those 12 Russians, Rosenstein said — people travel to cooperative countries and wind up in American custody after all. If the knowledge they might be arrested restricts someone who has been indicted from traveling, that also at least imposes a cost on cyber-miscreants.

Indictments also reveal to the public and their targets how much the United States knows about what has taken place, give "vindication" to victims and support other punitive measures, Rosenstein said.

The Treasury Department can use the information included in an indictment to impose sanctions, he said. Earlier this year, the U.S. sanctioned the Russians associated with the 2016 social media agitation campaign after they had been charged by Justice Department special counsel Robert Mueller.

Rosenstein may have had another audience in mind when he explained his strategy: his nemeses in the House Republican conference who have targeted him for possible contempt or even impeachment over their complaints that the Justice Department isn't giving them the information they want.

Rosenstein says the department is complying with everything they request and, in the past, has said he won't be bullied by allies of Trump who are trying to lean on him to help the president.

The overwhelming tone of Rosenstein's message in Aspen was: This is not a game.

"I want to emphasize that covert propaganda disseminated by foreign adversaries is fundamentally different from domestic partisan wrangling," he said. "As Sen. Margaret Chase Smith proclaimed in her 1950 declaration of conscience, we must address foreign national security threats 'patriotically as Americans,' and not 'politically as Republicans and Democrats.' "