Accessibility links
Not My Job: Former FBI Director James Comey Gets Quizzed On Loyalty Rewards Comey wrote a book called A Higher Loyalty and he told the Senate intelligence committee that President Trump demanded his loyalty over dinner. But what does he know about loyalty programs? 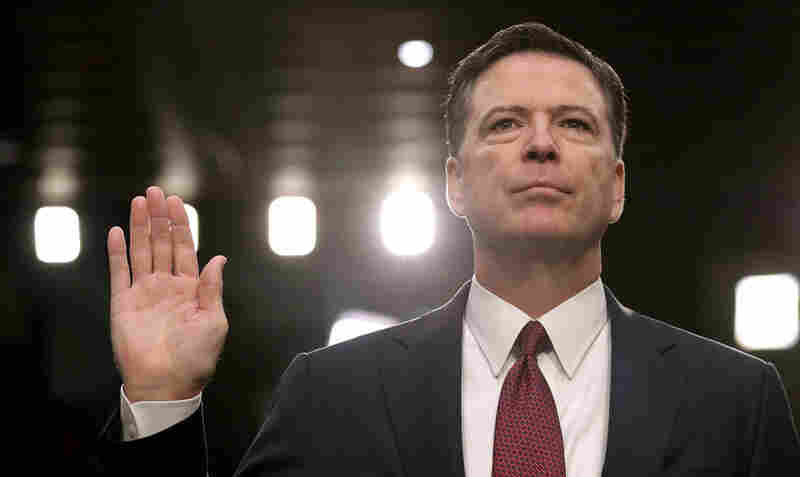 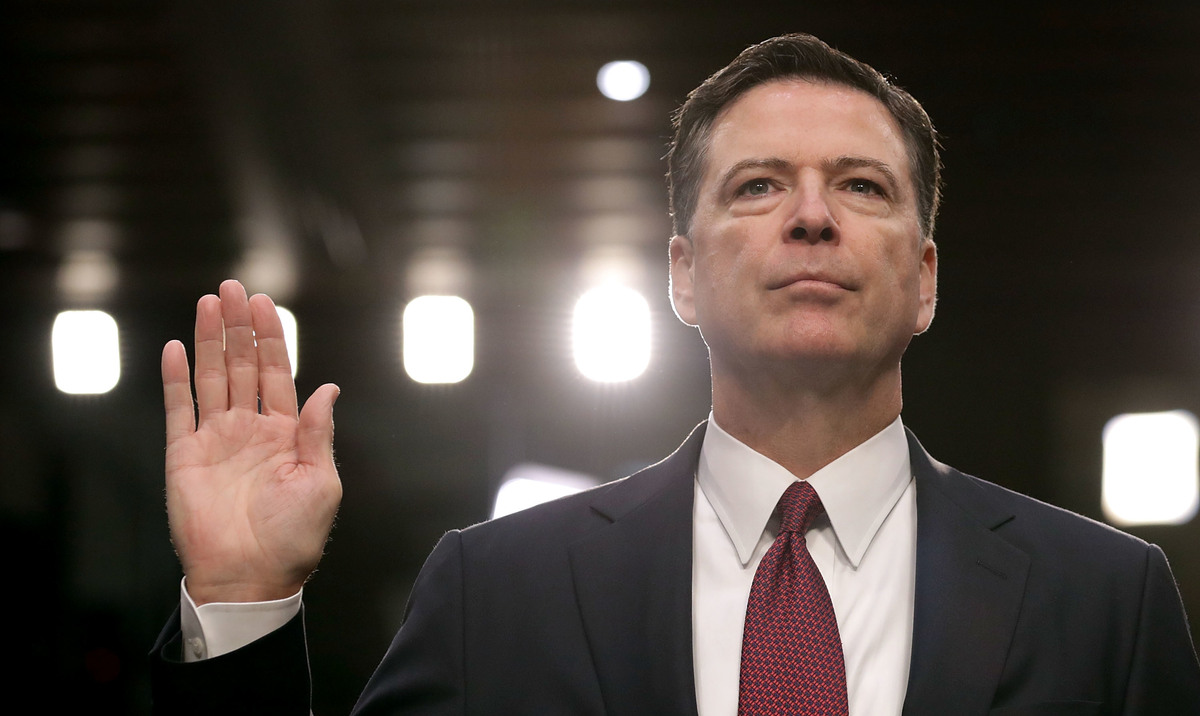 Former FBI Director James Comey is sworn in before the Senate intelligence committee on June 8, 2017, in Washington, D.C.

Former FBI Director James Comey has a lot of experience with loyalty — he wrote a book called A Higher Loyalty and he told the Senate intelligence committee that President Trump demanded his loyalty over dinner in January.

So we've invited Comey to play a game called "Welcome to our Loyalty Rewards Club!" — a quiz about reward programs where you buy stuff to get stuff.

And now the game in which we ask important people about completely unimportant things. We call it Not My Job.

James Comey rose through the ranks of the Justice Department, serving as U.S. attorney for the Southern District of New York and deputy attorney general during the Bush administration in 2013. President Obama named him director of the FBI. And we didn't check, but we're pretty sure nothing much of interest has happened with him since then.

SAGAL: So you have a book, "A Higher Loyalty," which I have been reading. And the stories about your youth are fascinating. You say in the book how, because you're so tall, people always assumed you play basketball.

SAGAL: Which you didn't, right?

COMEY: Yeah. I didn't play. People would always assume that I played basketball in college, which I didn't. I was a pretty good basketball player, but the late growth and a bunch of injuries made that - just wasn't part of my resume. And I started to nod to people when they'd say that, and then that nod with people I played with actually became an affirmative lie. And it ate at me so that I actually wrote a letter to - this is before email...

COMEY: I wrote a letter to the people I played with in graduate school saying, hey, look. I just want you to know I lied about playing in college. I'm really sorry that I did that.

SAGAL: Wait a minute. You wrote to your friends in law school and said, I just want you to know, while we're in law school, I told you I played basketball in college. I wasn't telling the truth, and I'm sorry.

ALONZO BODDEN: So are you saying the women that I've told that I played college ball...

BODDEN: They got a story out of it.

HELEN HONG: Wait. Are you saying when you said you did but you didn't...

HONG: Wow, that's a really good lesson for other people.

SAGAL: I think I might be the first person to ever say this to you. But, Jim Comey, couldn't you have just kept your mouth shut?

SAGAL: Thank you. I never told you what ball, though. What were your friends' reaction when they got these letters or emails or whatever it was from you out of the blue saying, I just want you to know, I misled you?

COMEY: I remember one who wrote back saying, dude, we knew that.

COMEY: And he added two other things. He said, look. You're a really good basketball player. You suck for other reasons.

ROCCA: Can I ask about the attempted hug?

SAGAL: Yeah. Well, this is the story I think you're asking about, when just after President Trump was inaugurated, if I remember correctly - and you should probably tell the story, I think, rather than me try to paraphrase.

COMEY: He invited the law enforcement leaders of the agencies that had protected the inauguration - and so Secret Service, park police, FBI and others - to the Blue Room for a reception. And then, when the doors opened, the president walked in. He was accompanied by the press and klieg lights, and so I retreated to the far end of the Blue Room and tried to get as far as I could away from him because I didn't want a photo-op with the president. And he scanned the room as he began speaking and missed me and picked the guy next to me.

SAGAL: Now wait a minute. You're skipping a bit. Why do you think he might have missed you that first time?

COMEY: Well, when he missed me, I thought, how could he miss me? I'm a giraffe.

COMEY: And he picked the head of the Secret Service, who is a normal-sized person. And I look to my left, and just to my left shoulder was a big blue curtain, which was very close in color to my suit jacket. And so I moved closer to it.

COMEY: And I pressed myself against it.

SAGAL: But it didn't work.

COMEY: It didn't work. It worked until it didn't work anymore. He saw me as his eyes swept the room a second time, and he called me forward. And he had hugged the head of the Secret Service before me.

COMEY: So all that's running through my head as I walk across the room. And at home, my wife and kids are watching it, saying, that's daddy's oh, [expletive] face.

ROCCA: And I think you said it was, like, in slow motion - right? - as he was going into the hug.

COMEY: Yes, in slow motion. And I just thought, there's no way. This is crazy. There's no way the man's getting a hug from me. And so I reached my hand forward. He grabbed my hand, and he pulled in and down. And I...

COMEY: I'm not - I can't fool anybody that played football, but I called on all the planks and side rows (ph) and everything I had to resist. And he couldn't pull me down. And so he just got his head up to the side of my head. Unfortunately, the cameras were on the other side, so instead of a hug, the world saw a kiss.

BODDEN: Do you realize you're one of the few people who's had a top view of that hair?

COMEY: I'm already glad I came on the show.

SAGAL: Well, James Comey, it is an absolute pleasure to talk to you. But we have invited you here to play a game that we're calling...

SAGAL: Your book is called "A Higher Loyalty." As we all remember, the president demanded your loyalty. And that made us wonder, what do you know about loyalty programs?

SAGAL: That's where companies give you points for buying things, so you can buy more things. We're going to ask you three questions about loyalty programs. Get two correct, you'll win our prize - the voice of anyone they like on our show for their answering machine for one of our listeners. So, Bill, who is James Comey playing for?

SAGAL: The most popular loyalty programs, of course, are airline frequent flyer deals. If you fly enough miles on Japan Airlines, you can redeem them for which of these? A, getting one bat at a Japanese professional baseball game; B, an admission to an amusement park where your kids can pretend to be midwives, or C, a Hello Kitty-branded insulin pump?

SAGAL: You're going to go with the bat. No, I'm afraid, actually, it was the amusement park. It's called the Kandu amusement park. And kids can go and pretend to do all kinds of adult jobs, including midwife, and our favorite, car rental clerk.

SAGAL: All right. You still have two more chances here. Not a problem. Next question. Amtrak, the American rail system, used to have a frequent traveler program, too, where if you traveled enough by rail, you could earn what? A chance to hang out with the engineer and drive the train - choo-choo; B, a video cassette of the movie "Silver Streak," or C, a plane ticket?

COMEY: Well, since I'm hoping it's not A or C, I'm going to choose B and pray that it's B.

SAGAL: No. It was actually C, the plane ticket.

SAGAL: Of course. What do you think people on trains want? They'd like - all right.

We still have a chance here. There's a store called AlleyCat Comics back home for us in Chicago. It offers its loyal customers what perk after 50 visits? A, they give you your own official superhero identity, such as Uber Driver Man or the Human Instant Pot; B, you get to punch the owner in the stomach, or C, a copy of the worst comic book ever, Marvel's "The Amazing Garbage Man"?

COMEY: I think I'll take A.

SAGAL: Well, I'm going to give you a little hint that this is actually inspired by a loyalty program called Belly.

COMEY: I meant to say I wouldn't take A.

COMEY: I'm going to go with B.

SAGAL: You're right. Yeah. At this - I don't know if anybody's done it, but you can punch the owner in the stomach.

SAGAL: Bill, how did James Comey do on our quiz?

SAGAL: Wait a minute. We have decided to reopen this game.

SAGAL: It just so happens...

SAGAL: ...That another question has come to light.

SAGAL: Since we've reopened the game at this late date, we're going to ask you this question, even if it might change the result.

SAGAL: I just want you to know I feel a little bad about that one. That was...

SAGAL: All right. Here we go We actually have another question.

COMEY: I would have gone there if I were you.

SAGAL: One of the most earliest and popular loyalty programs is S&H Green Stamps. You may remember this from the '70s, right? You got those? Well, it was so popular in those days, that S&H Green Stamps are credited with what? A, inspiring the names of TV's Starsky and Hutch, S and H; B, decreasing the incidence of mouth disease because people exercised their tongues so much by licking them, or C, inspiring the phrase, green with envy, as in, I wish I had as many Green Stamps as you do?

BODDEN: Keep in mind this answer's on the Internet, so it may have been influenced.

SAGAL: Yeah. It could've been placed by the Russians, I guess.

COMEY: I think we're going to go with A, then.

SAGAL: ...According to the Internet.

SAGAL: ...How did Former Director James Comey do on our quiz?

SAGAL: Congratulations. James Comey is the former director of the Federal Bureau of Investigation. His book "A Higher Loyalty" is an interesting and very diverting story of loyalty and his particular adventures. James Comey, thank you so much for being with all of us here today. A pleasure to meet you.

SAGAL: Coming up, Bill straps on the feed bag for the Listener Limerick Challenge. Call 1-888-WAITWAIT to join us on the air. We'll be back in a minute with more of WAIT WAIT... DON'T TELL ME from NPR.