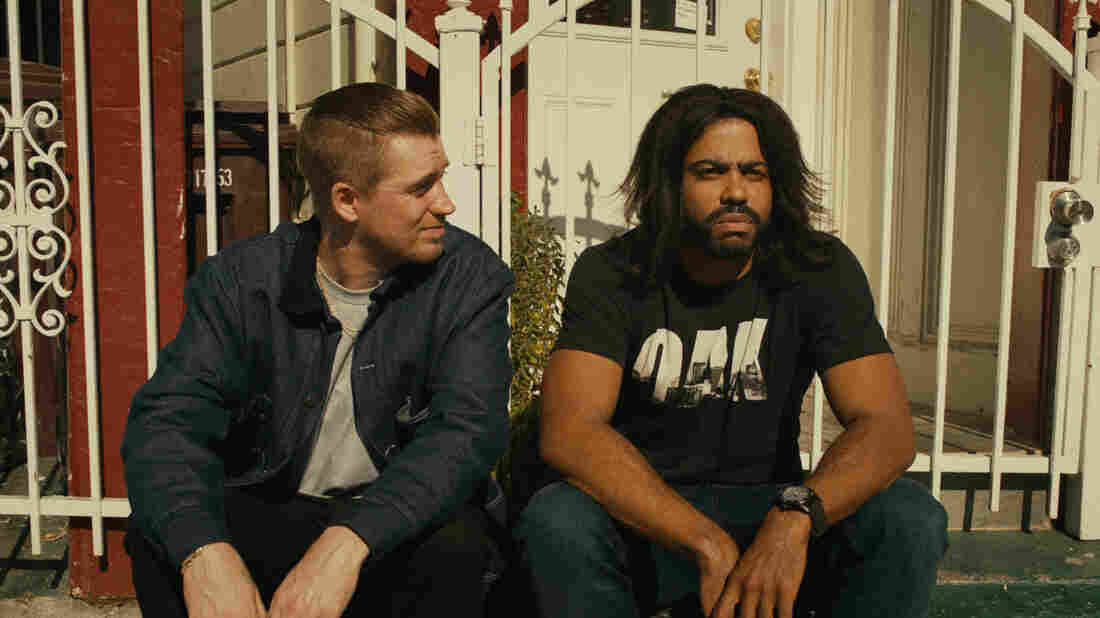 In Blindspotting, the friendship between hotheaded Miles (Rafael Casal, left) and ex-con Collin (Daveed Diggs) is a window into the race and class politics of a gentrifying Oakland. Robby Baumgartner/Lionsgate hide caption 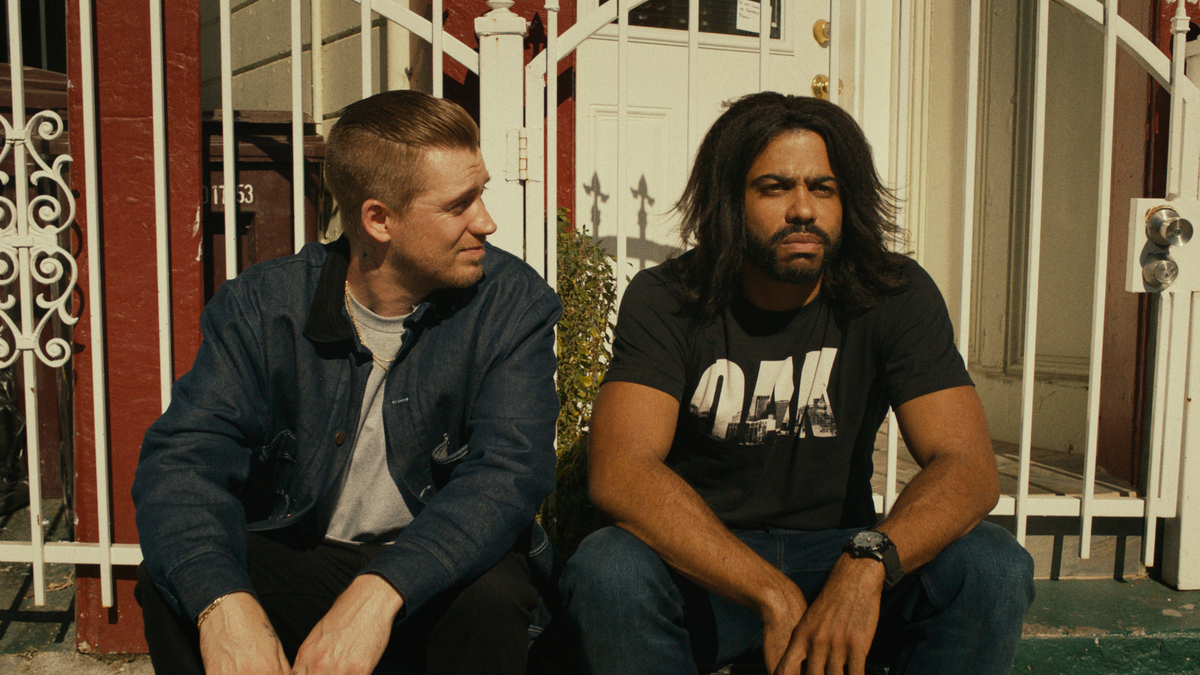 In Blindspotting, the friendship between hotheaded Miles (Rafael Casal, left) and ex-con Collin (Daveed Diggs) is a window into the race and class politics of a gentrifying Oakland.

For many, it's the birthplace of groundbreaking art and politics. But Oakland, like many major cities across the country, is changing.

That's the tension at the heart of a new film called Blindspotting. It tells the story of two lifelong friends and Oakland natives, one white and one black, as they grapple with fitting into this new world.

The film stars and was written by two friends: Rafael Casal, a nationally acclaimed slam poet, and Daveed Diggs, who you may know for his award-winning turn as both the Marquis de Lafayette and Thomas Jefferson in the Broadway hit Hamilton, as well as for a recurring role on the ABC series Black-ish. Blindspotting has been about 10 years in the making.

"What we decided was that we wanted to tell a Bay Area story 'cause that's where we're from," Diggs says. "And it's a place we're very proud of and it's a place that we feel like has interesting stories to tell that we hadn't seen yet. And we also wanted to star in it.

"So that was about as much as we knew going in and right around that same time Oscar Grant was murdered at Fruitvale BART station [on Jan. 1, 2009]. And so telling a story about Oakland meant that this was going to be part of the story."

A police shooting of an unarmed black man is one of the plot elements in Blindspotting, as Diggs and Casal mention in an interview.

On Diggs' character Collin, a black ex-convict nearing the end of his probation

Diggs: I think Collin is trying really hard to get on the other side of this thing. I think if you know anybody who's on probation, who's been in jail and is dealing with the after-effects of that, there are a series of traps set up to try and send you back to jail. And the amount of them is actually kind of staggering. And so Collin's been spending the better part of the last year kind of navigating this system and just trying to get to the other side of this. But he is, you know, also working in a city where his context is changing greatly, and the way that the neighborhood is being policed is different. ...

Before the film starts, or at least before the big incident of the film, I think he's already ... dealing with certain kinds of trauma and certain kinds of PTSD that I think, you know, we people of color certainly feel in this country, but really a lot of us I think are feeling. And then on his way home from work one night he and he alone witnesses the police shooting of an unarmed black man. And that for him sort of ramps the stakes of everything. All of a sudden his safety — that he was already sort of questionable about — feels even more unsafe, and the haunting of that night starts to bleed into his daytime.

On Casal's character Miles, a white man with a hotheaded streak

Casal: Miles is a guy that — Daveed and I both know a number of Mileses in the Bay Area and I imagine that kind of character in different iterations exists all over the place. But I think Miles is — in his reality, he's the minority among minorities, right? He's a white face in a predominantly black and brown space. And so he's built his survival on being — having the offense as his defense, right? I can't imagine how many more times he's been tested or called out or had his authenticity questioned than growing up in that community. ... And what you get from that is a hardened dude, right? Same for Collin to a certain degree. Up until a year prior to this movie happening, right, we sort of get a sense of what Collin did to get him to get himself thrown in prison later. But Miles still exists in that violence.

And then he's also, you know, the other side of Miles is he's a family dude, and he's trying to be a good father, and he's trying to support this family that he has of Ashley [wife] and Sean [son]. And so he's a blue-collar, working-class dude who's fiercely loyal and is afraid of his context changing because it means that he has to once again fight to claim his space and his identity.

On the scene where Miles chides Collin about his ex-girlfriend

Casal: I don't know that Miles is trying to figure out who to be. I think Miles knows exactly who he is. I think his values are what everything is coming up against, right? Miles' whole thing is just family and loyalty and community. That is the fundamental core of who he is.

And so to him, in that scene he's talking about Collin's ex-girlfriend who, in his mind, broke every cardinal rule of what loyalty is and because of that she should be banished to an island. Like, she's the worst, you know? And she has a very different sort of mentality about where Collin is and how she sees Miles. And when you see sort of this re-creation in the film of why Colin went to jail, Miles was there and Val wasn't. And she didn't entirely see the situation and so her and Miles see what happened differently and why Collin went to jail differently. And that divide is a lot of the tug-of-war that Collin is sort of pinched between.

Diggs: One of the things I love about that scene is that it is — this is not an uncommon argument with men who are friends, right? If you don't like somebody's significant other ... that's a roastable offense. In private you will get roasted for that. So I think it's this pretty relatable situation that's happening.

My other favorite part about that scene is that Miles starts that argument essentially out of boredom — like, there's just nothing else happening. And so he looks for something to have an argument about, you know? I love those details that are telling of — that are friendship details, right? Because I think these two have been together for so long; they're more like siblings than just friends.

On using poetic verse in the screenplay

Casal: Oh, it was meticulously scripted.

Diggs: Very highly scripted, but also, you know, that's where we come from. ... That stuff is the oldest stuff in the script. We knew how to do that. We didn't know how to write a screenplay. So we had this sort of reverse engineer those moments from the verse moments.

On the present moment for Oakland filmmakers, between Ryan Coogler (Black Panther, Fruitvale Station) and Boots Riley (Sorry To Bother You)

Diggs: Well I think there is a push — there has been in the last few years a particular urgency for artists from Oakland to get their visions out there in whatever way possible. And part of that has to do with the changing landscape, right. I think a lot of us are aware of how quickly the Oakland we knew is disappearing and wanting to create some sort of time capsule — something that we can look at in 10 years and point to and be like, "That was it. That's where I come from." So I think that's part of it.

I also just think there are so many stories to be told from Oakland and from the greater Bay Area. And we're in an era right now in Hollywood where there are so many different modes of distribution and distribution outlets that people are content-hungry, and everyone's trying to figure out what's going to set them apart, right? When you run around and go to these meetings, you get this weird feeling that people are just looking for the thing that is different instead of the thing that is tried and true, which is interesting. ... But I think it's a place that is unlike anywhere else. So there's a lot of stories that feel different there, and we haven't seen them on the screen yet. So I think there's a particular attraction to places like that right now.

Alexi Horowitz-Ghazi and Janaya Williams produced and edited this interview for broadcast. Patrick Jarenwattananon adapted it for the Web.