Accessibility links
Who Ordered The Car Bomb That Killed Maltese Journalist Daphne Caruana Galizia? The reporter was killed last October, as she was digging up dirt on Malta's most powerful. The final words on her blog were: "There are crooks everywhere you look now. The situation is desperate." 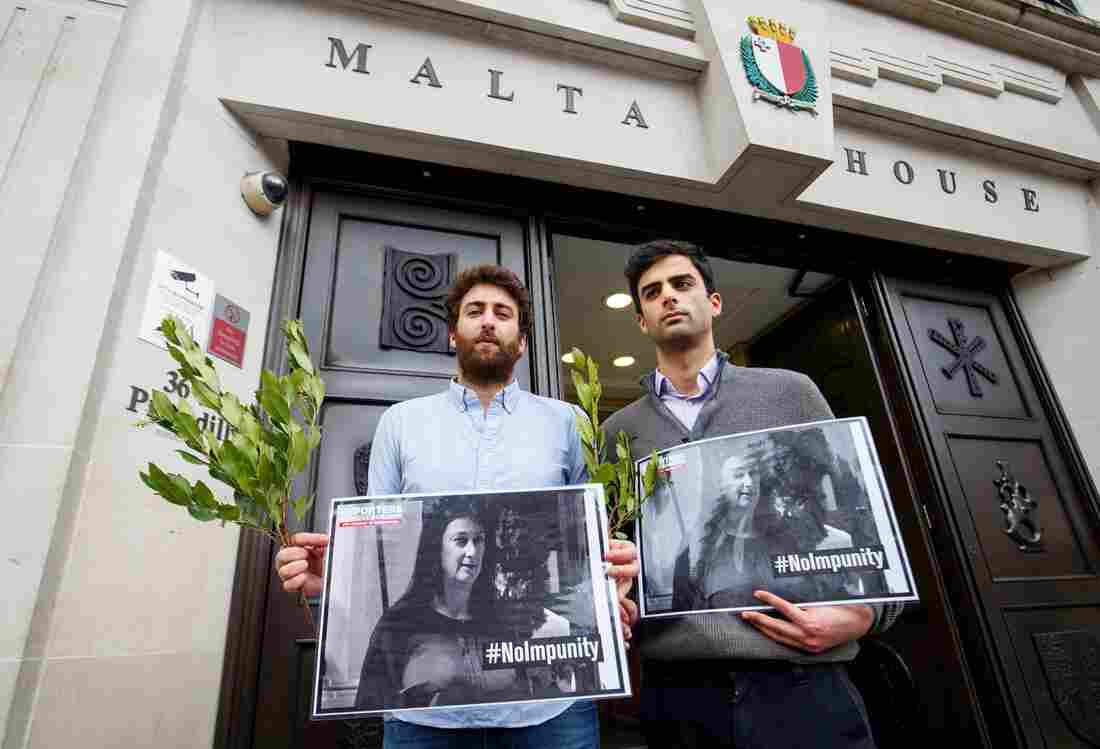 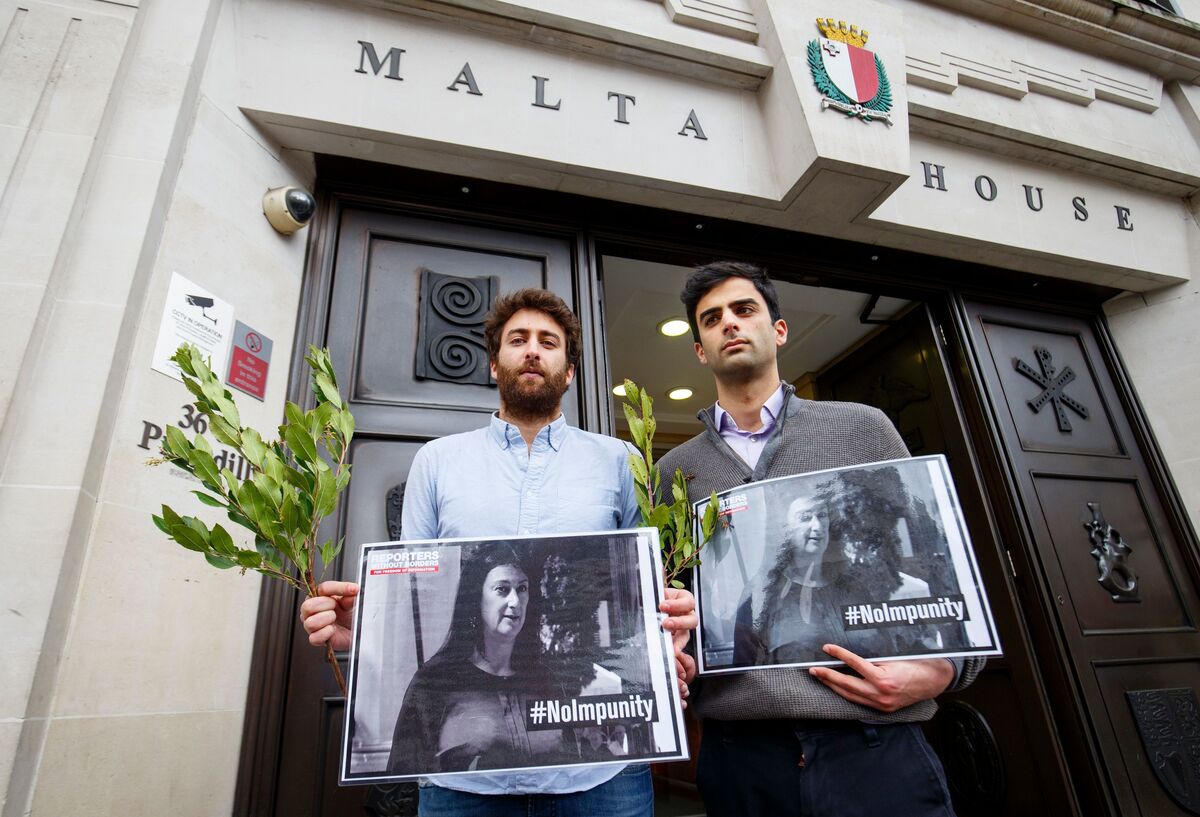 The last time Matthew Caruana Galizia saw his mother alive, she was going to the bank.

A government minister had gotten the courts to freeze her bank accounts. She intended to fight for access to her funds.

Daphne Caruana Galizia was an investigative reporter, a towering, intense mother of three, digging up dirt on the most powerful figures in Malta, the European Union's smallest member state.

Thousands read her blog, Running Commentary, in this golden-walled island nation of fewer than half a million people, located between Libya and Italy.

On Oct. 16, 2017, a warm, heavy day in Bidnija, the northern village where she lived with her lawyer husband in their garden-encircled home, she typed her blog's final words: "There are crooks everywhere you look now. The situation is desperate." 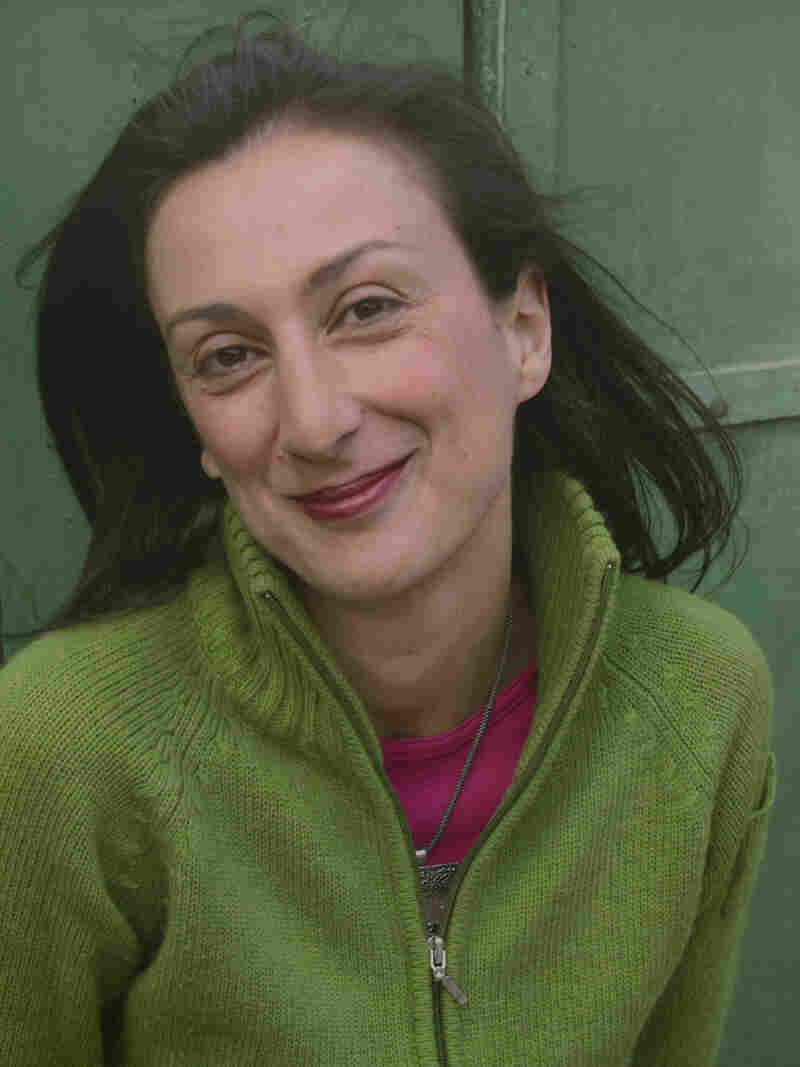 An undated photo of Daphne Caruana Galizia, who was a Maltese journalist and anti-corruption blogger and was killed by a car bomb on Oct. 16, 2017. Getty Images for the Daphne Project hide caption 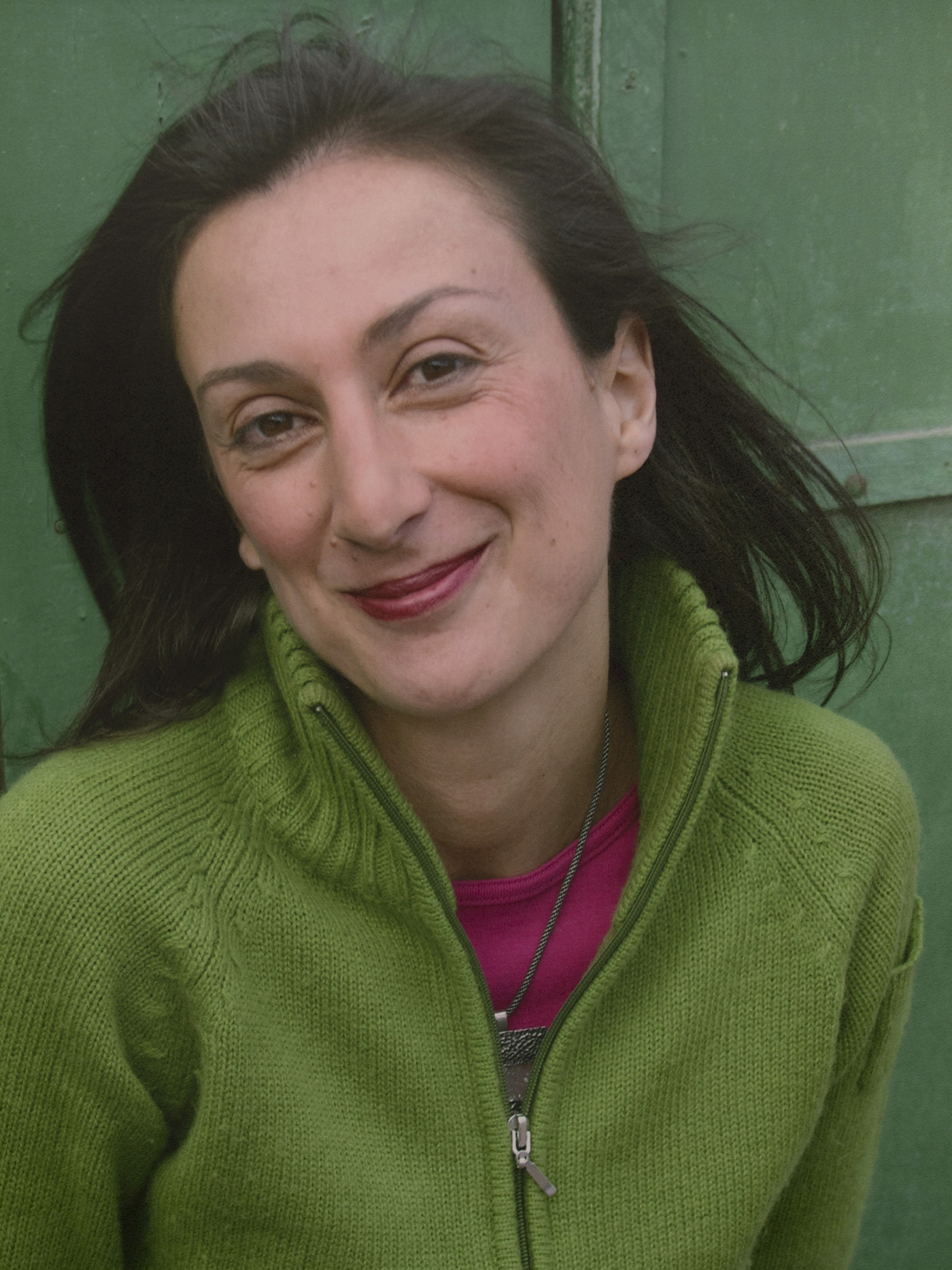 An undated photo of Daphne Caruana Galizia, who was a Maltese journalist and anti-corruption blogger and was killed by a car bomb on Oct. 16, 2017.

Getty Images for the Daphne Project

Her son heard her drive away in her gray Peugeot 108. Then he heard an explosion.

"I knew it was a car bomb straight away," he says.

He ran down the rocky village road barefoot, frantically calling his mother's cellphone. He heard a car horn blaring and smelled burning fuel and spotted his mother's car ablaze in a field of wildflowers. He saw pieces of flesh on the road.

"I always worried about her," says Matthew Caruana Galizia, a 32-year-old investigative journalist and software engineer based in London. "Over the years, our front door was set on fire, our dog's throat was cut. She got death threats. She was called a witch, an enemy of Malta."

"They wanted to shut her up"

Dozens of journalists are killed every year around the world in war zones or countries with weak rule of law like Russia. The European Union, a free-speech haven that's a refuge for journalists attacked in their own countries, was shocked that such a brazen murder could happen in their club.

"The right of a journalist to investigate, ask uncomfortable questions and report effectively is at the heart of our values and needs to be guaranteed at all times," Schinas told reporters in Brussels. 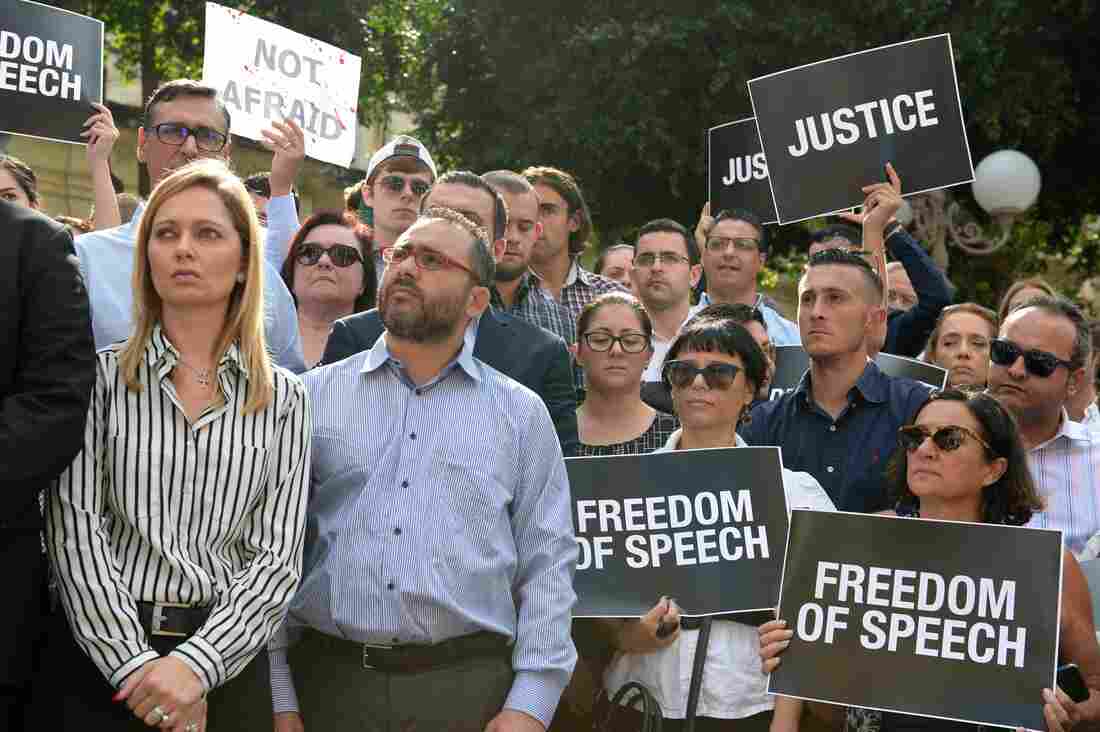 Journalists gather outside the Parliament in Valletta, Malta, on Oct. 19, 2017, in a silent commemoration to after the murder of Daphne Caruana Galizia. They vowed that the savage attack would not intimidate workers in the media. Matthew Mirabelli/AFP/Getty Images hide caption

She dug into money laundering and fraud allegations at Pilatus Bank, run by Ali Sadr Hasheminejad, who is facing criminal prosecution in the United States. She combed through the leaked law firm records known as the Panama Papers and found offshore wealth tied to the Maltese prime minister's inner circle.

"They wanted to shut her up," says her 52-year-old sister Corinne Vella. "She obviously spoke truth to power. That was threatening to people in power."

'I Do This For The Families': The Daunting Task Of Identifying Missing Migrants

Vella, tall and intense like her sister, meets with NPR at a fountain outside the presidential palace's flowering gardens. She's frustrated that the very institutions her sister was investigating are now in charge of finding her killers.

Three men were arrested, accused of planting the car bomb and detonating it. They have been charged with Caruana Galizia's murder and are awaiting trial.

But there's no word on who ordered the assassination.

"Let's just say I actually found my sister's murderer," she says. "What am I supposed to do? Who can I turn to? There are so many people who are prevented from doing their jobs or deliberately not doing them or worse. That's exactly why the country is a mess."

The EU is pressing Prime Minister Joseph Muscat to solve the case. He has insisted that he's doing everything possible and has also emphatically denied all of Caruana Galizia's allegations of wrongdoing. He has said he will resign if found to be corrupt. (On Sunday, he said a year-long judicial investigation into financial misdeeds related to the Panama Papers had cleared him, his wife and his political associates.) 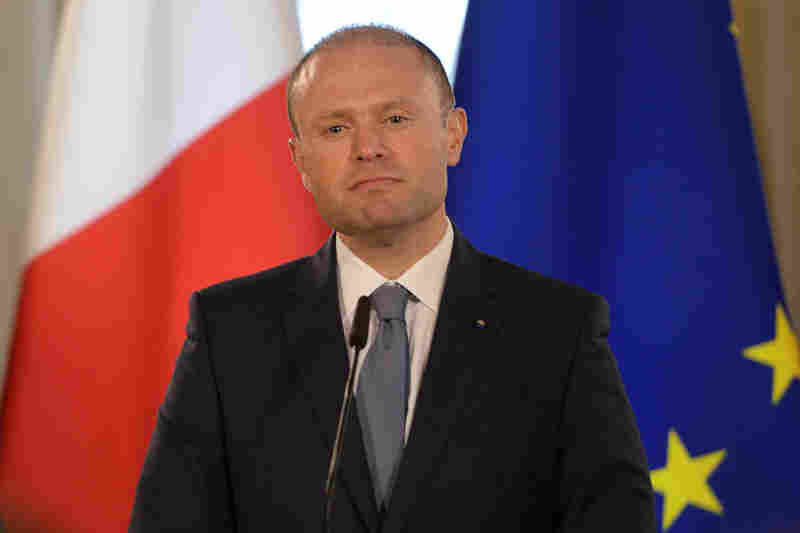 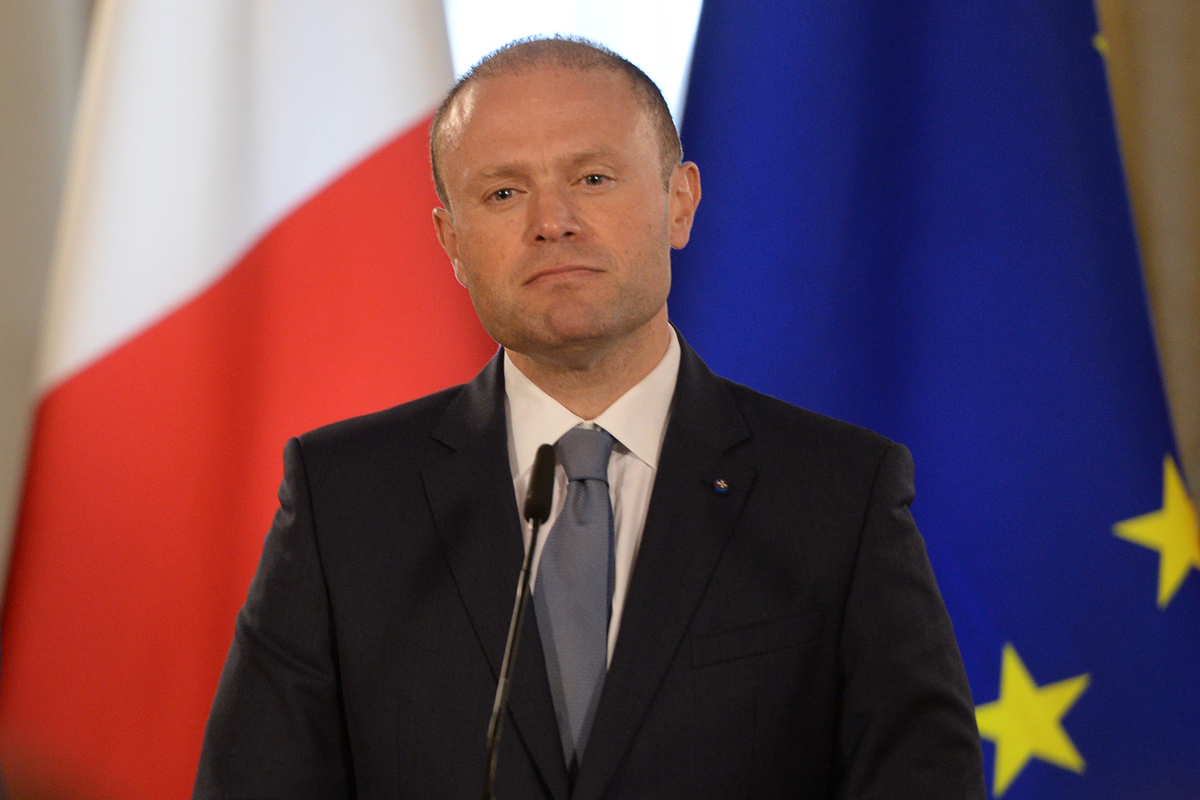 Muscat had sued Caruana Galizia over her allegations that his wife benefited from an offshore company. He also sued her son, Matthew, over a Facebook post about money laundering. And the Caruana Galizia family sued the state because of a conflict of interest in the investigation.

Muscat's spokesman did not respond to NPR's repeated requests for comment.

Ana Gomes, a Portuguese member of the European Parliament, is growing impatient with Malta's government. She has led delegations here to push for answers on the murder investigation.

"We are very concerned that the investigation will die down, so to say," she tells NPR during her most recent visit to Malta.

Gomes, a former ambassador with an activist's temperament, wonders aloud if the government is interfering with the investigation. She had asked Muscat why he hadn't removed a top aide and government minister implicated in the Panama Papers.

After the corruption allegations involving his government, Muscat, who has been prime minister since 2013, called an early election in June 2017, and easily won a second term. 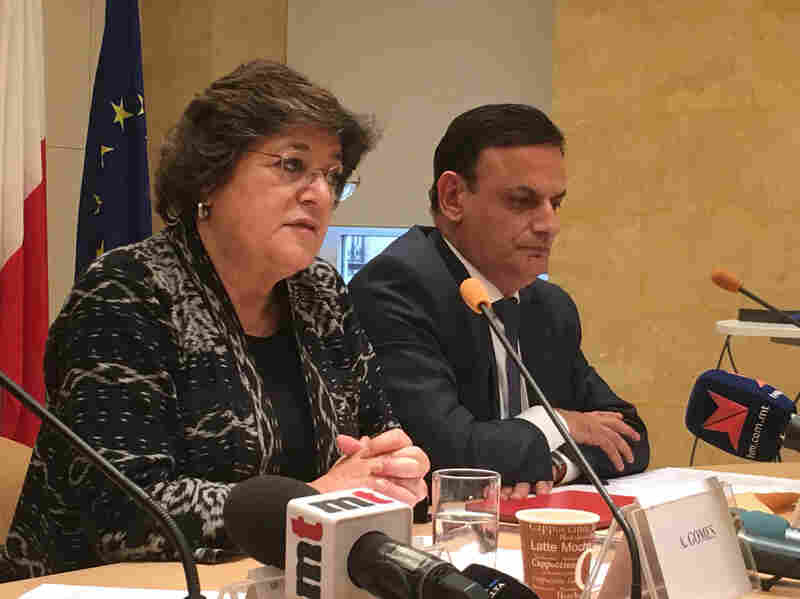 Ana Gomes, a Portuguese member of the European Parliament, has led delegations to push for answers on the murder investigation in Malta. Joanna Kakissis for NPR hide caption 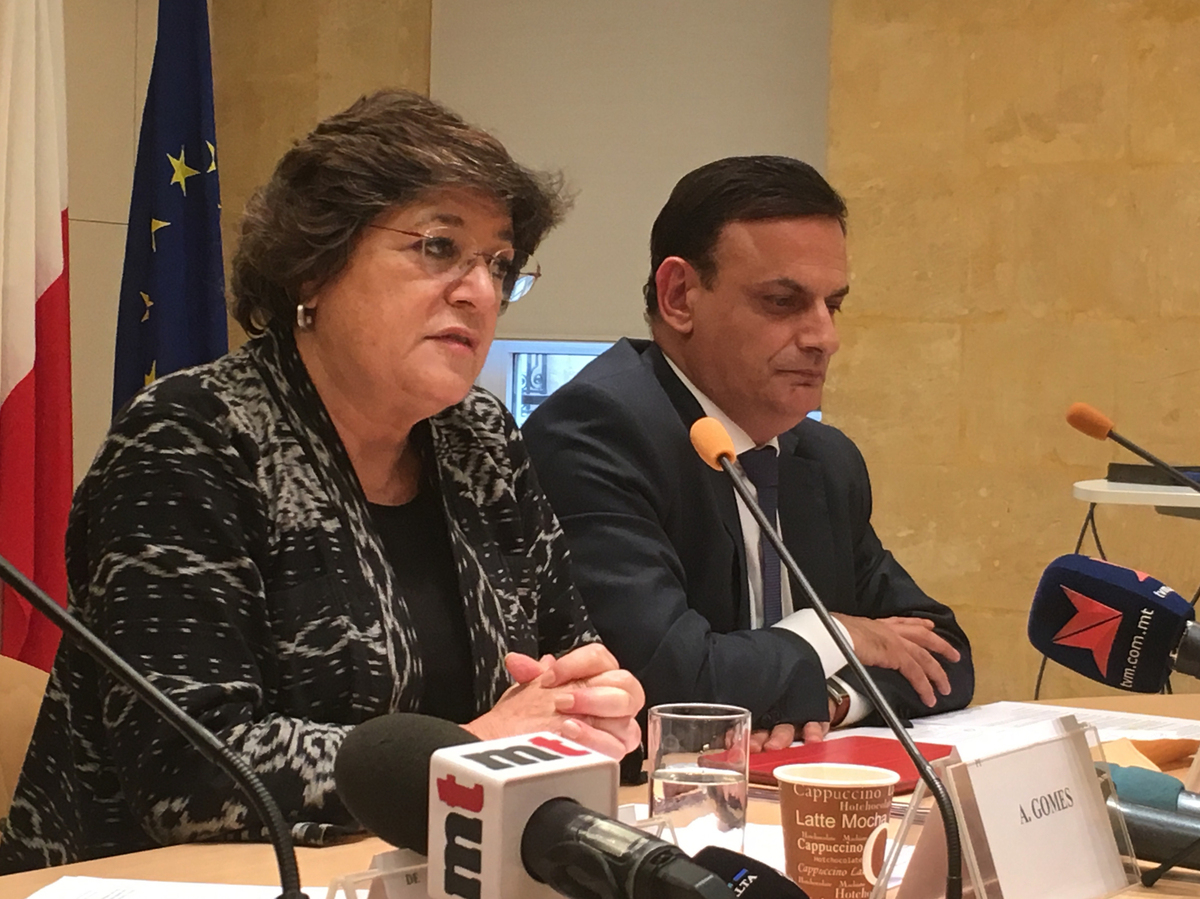 Ana Gomes, a Portuguese member of the European Parliament, has led delegations to push for answers on the murder investigation in Malta.

"He dismissed our concerns with the argument that he had won an election, he would do whatever he decided," she says, throwing up her hands. "Of course, we don't believe that an election cleans what are very serious accusations of corruption."

Gomes says the EU seems more interested in solving Caruana Galizia's murder than the Maltese government. But she also admits that there's not much the EU can do to punish Malta other than "withhold some structural funds."

Muscat's reputation may have taken a hit outside Malta. But many here support the 44-year-old prime minister, especially the working class.

In the fortress-filled port town of Cospicua, his Labor Party is revered for fixing up broken roads and public parks and cutting electricity bills. 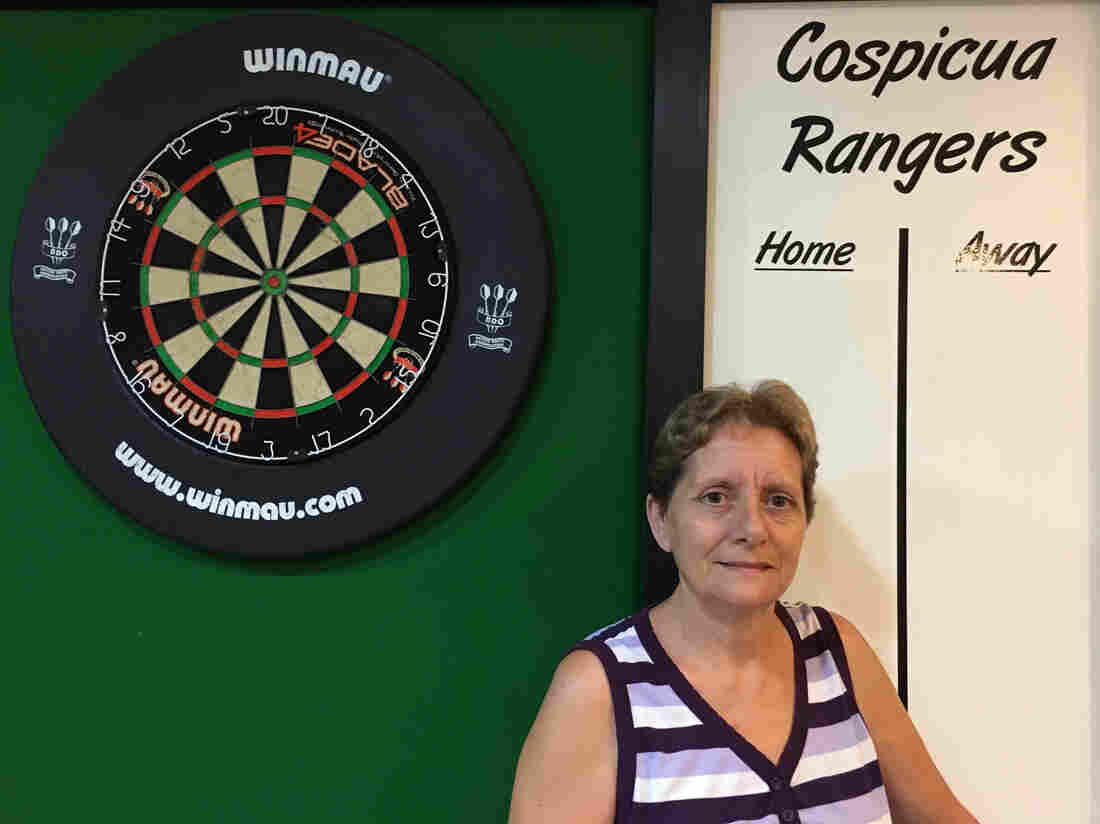 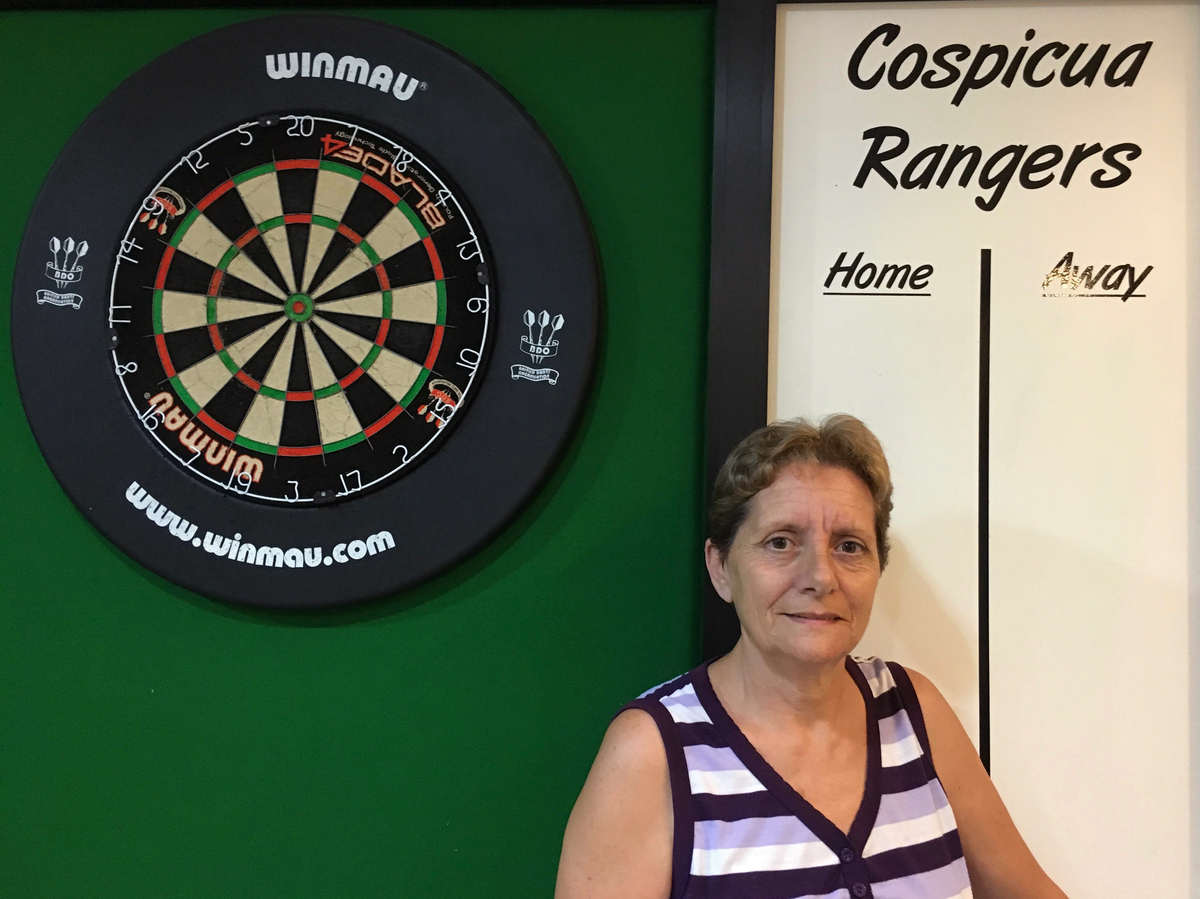 "He helped all of us," says Grace Attard, a 57-year-old no-nonsense grandmother pouring mugs of Maltese lager at the sports canteen she runs with her husband, Mario. "Because with that money he leaves in our pockets, we can live a better life."

Attard gestures to a case filled with sports trophies. There's a photo of a smiling Muscat with her son, a champion pool player. "He's there for everybody," she said. "He does not look down on us. He says we must help each other."

She credits Muscat for improving the economy and refuses to believe he is corrupt.

"I couldn't read all she said because she hurt a lot of people," she says. "Now the Europeans are saying bad things about Malta without talking to us, to me, because I will tell them everything is better and nothing is worse since Joseph Muscat became prime minister."

For some in Malta, Caruana Galizia's investigative reporting is overshadowed by her biting, sometimes gossipy, commentaries on the personal lives of politicians. She accused one of being a professional escort, another of frequenting brothels.

Not enough Maltese seem interested in her reports on corruption, says Simon Busuttil, the former leader of the opposition Nationalist Party who lost to Muscat last year after promising to clean up graft in government.

"I was openly accused of damaging my country's reputation by talking about corruption," says Busuttil, a silver-haired lawyer, with a pained laugh. "Perhaps what is worse than having corruption, what is worse than a breakdown of the rule of law is precisely this: the lack of public reaction in disgust, in disdain, in protest against it. That's why Daphne was so frustrated."

Just days before her murder, Caruana Galizia told a Council of Europe researcher that she worried how the abuse she faced would affect other whistleblowers.

"My biggest concern is that because people see what's happened to me, they don't want to do it," she said. "People are afraid of consequences." 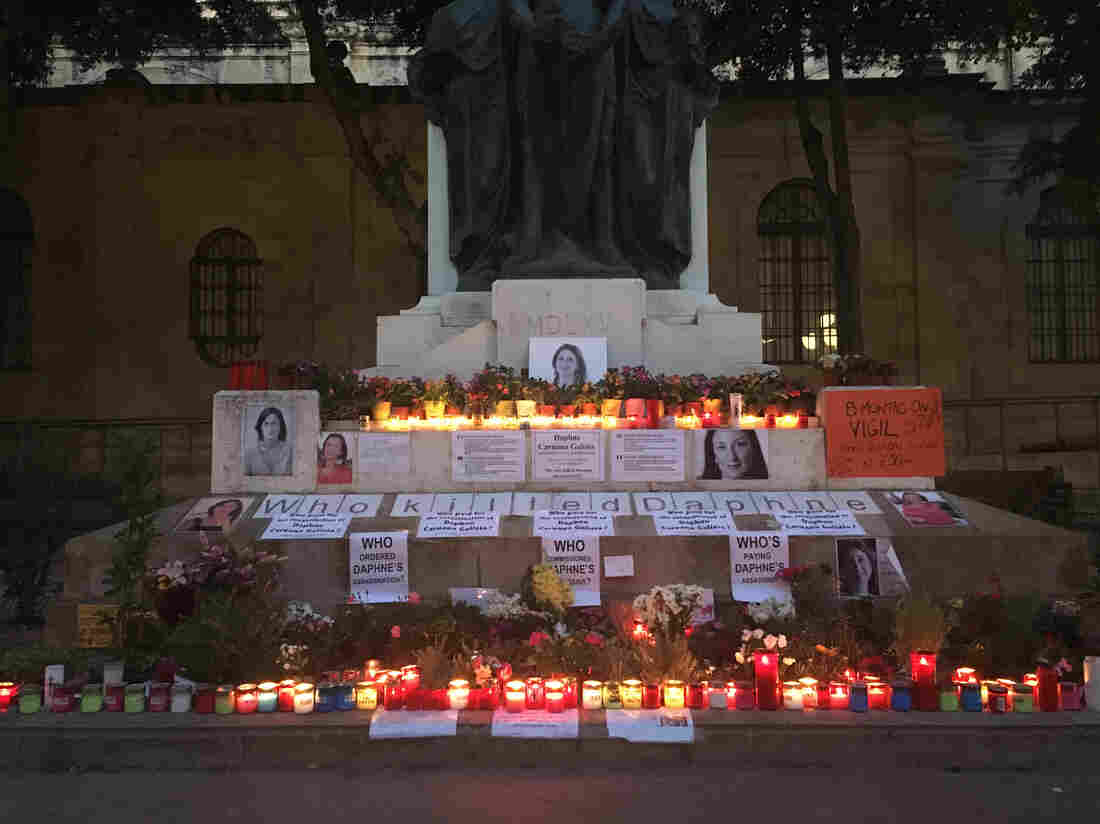 On the 16th of every month, supporters of Daphne Caruana Galizia mark the day of her murder with a vigil across from the courthouse in Valletta. Joanna Kakissis for NPR hide caption 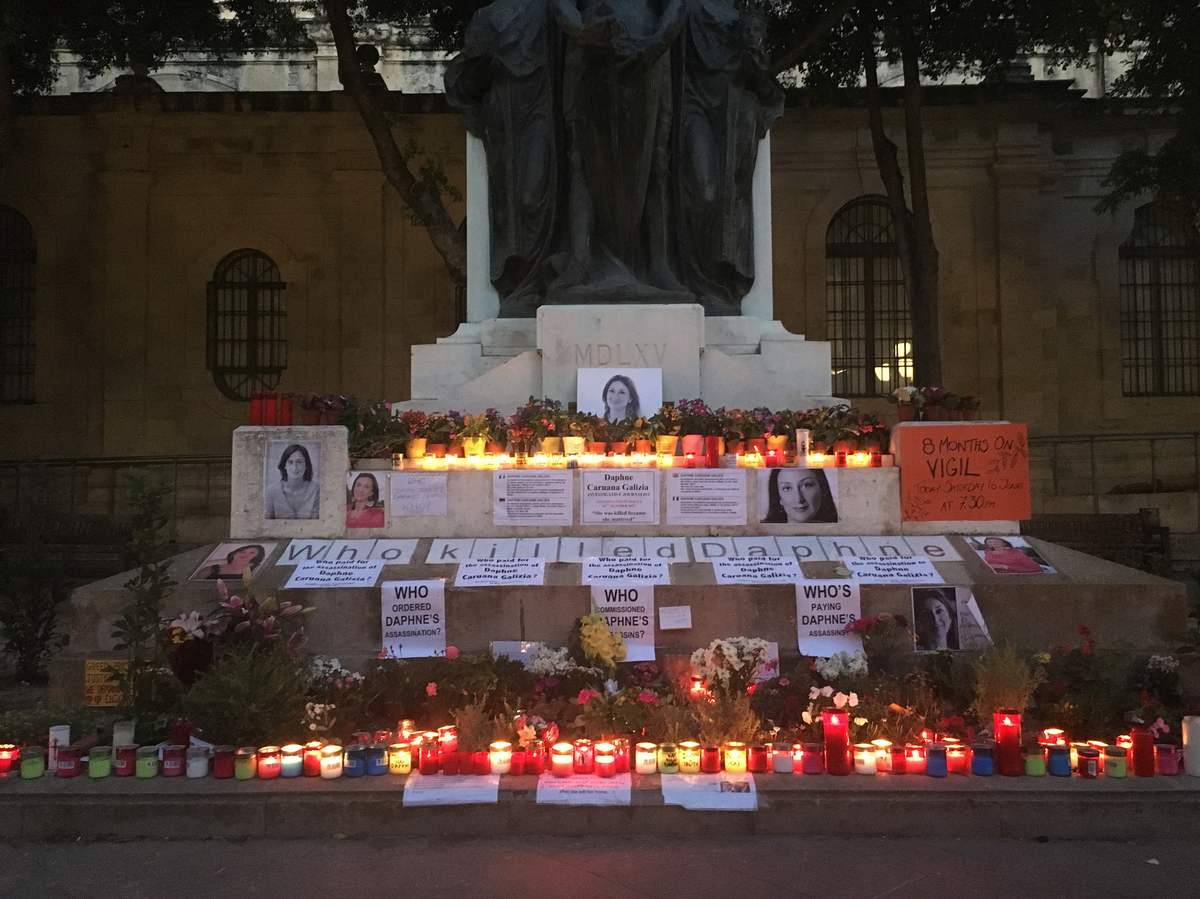 On the 16th of every month, supporters of Daphne Caruana Galizia mark the day of her murder with a vigil across from the courthouse in Valletta.

Not everyone is. A collective of international journalists has come together to continue Caruana Galizia's investigations into corruption. The Daphne Project, as it's called, is also investigating her death. There have already been long reports published in The New York Times, Reuters and The Guardian, as well as Italian and French newspapers.

And one of her longtime readers, Manuel Delia, has started his own investigative blog.

"She held up a mirror to the country and pointed out the hypocrisies of our community," Delia says. "And this is one big reason why she was isolated so much."

He stands on the still-scorched earth where Caruana Galizia was murdered. There's a makeshift memorial here with potted plants and photographs of Caruana Galizia smiling with bright eyes. He points to a sun-bleached Maltese flag there.

"Malta is a country we're proud of, and rightly so," he says. "It's a beautiful Mediterranean country, we've done well for ourselves, people have jobs here, and everyone wants to come here to enjoy the sun and to enjoy the beautiful heritage. But underneath that surface is an ugliness, is a rot."

Caruana Galizia's supporters believe she was trying to root out that rot. They don't want her to be forgotten.

On the 16th of every month, they mark the day of her murder with a vigil outside the courthouse in Malta's capital Valletta.

Photographer Pippa Zammit-Cutajar never misses one. "I don't feel I am part of the other Malta, the one that allowed this to happen," she said at last month's vigil.

Matthew Caruana Galizia was also there, the first time he'd returned to Malta since his mother's funeral.

He joined the crowd singing the national anthem in her honor. They held up dozens of signs asking: Who killed Daphne?