Accessibility links
Beowulf In The Suburbs? 'The Mere Wife' Is An Epic Retelling For too long the Old English poem has long been perceived as a "masculine text," says Maria Dahvana Headley. Her new adaptation is told from the perspective of Grendel's mother. 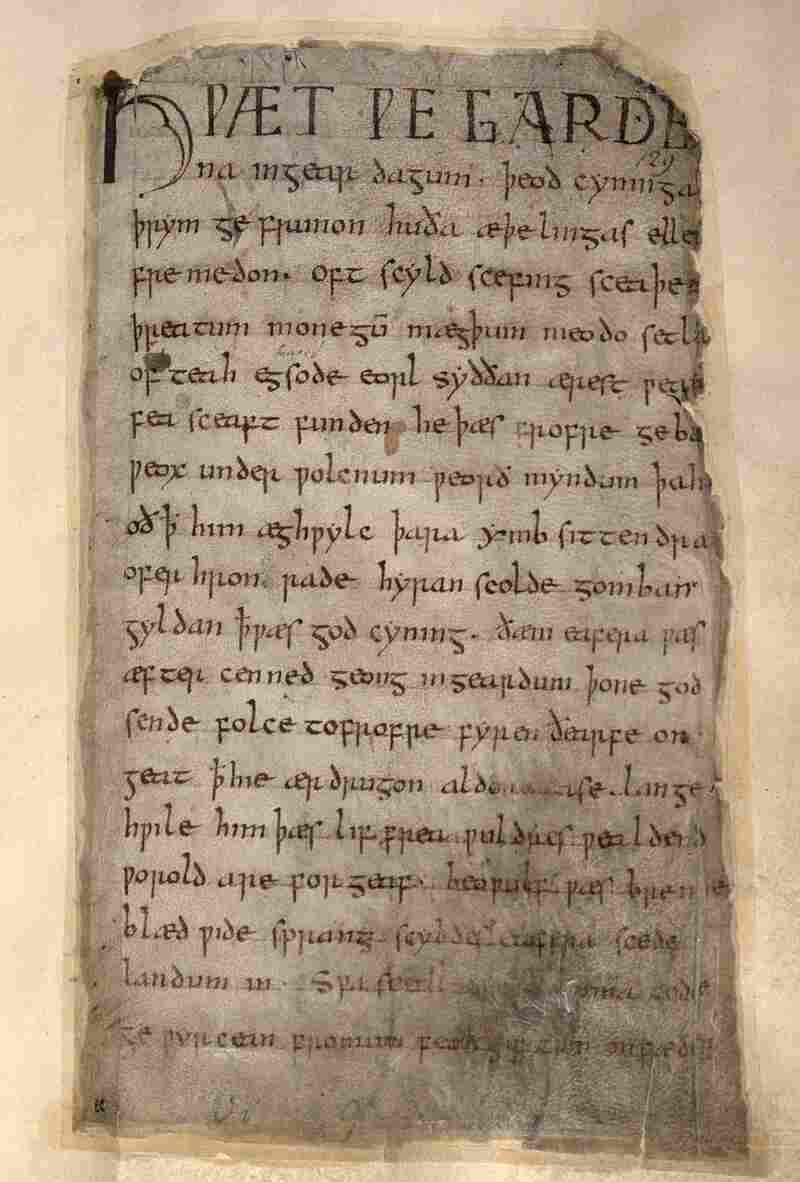 "This text has long been perceived as a masculine text," says Maria Dahvana Headley. "It's been perceived as: Oh that's about men and war. But I think this text is as much about domesticity ... it's a text about home." The Beowulf manuscript above is thought to be approximately 1,000 years old. The British Library hide caption 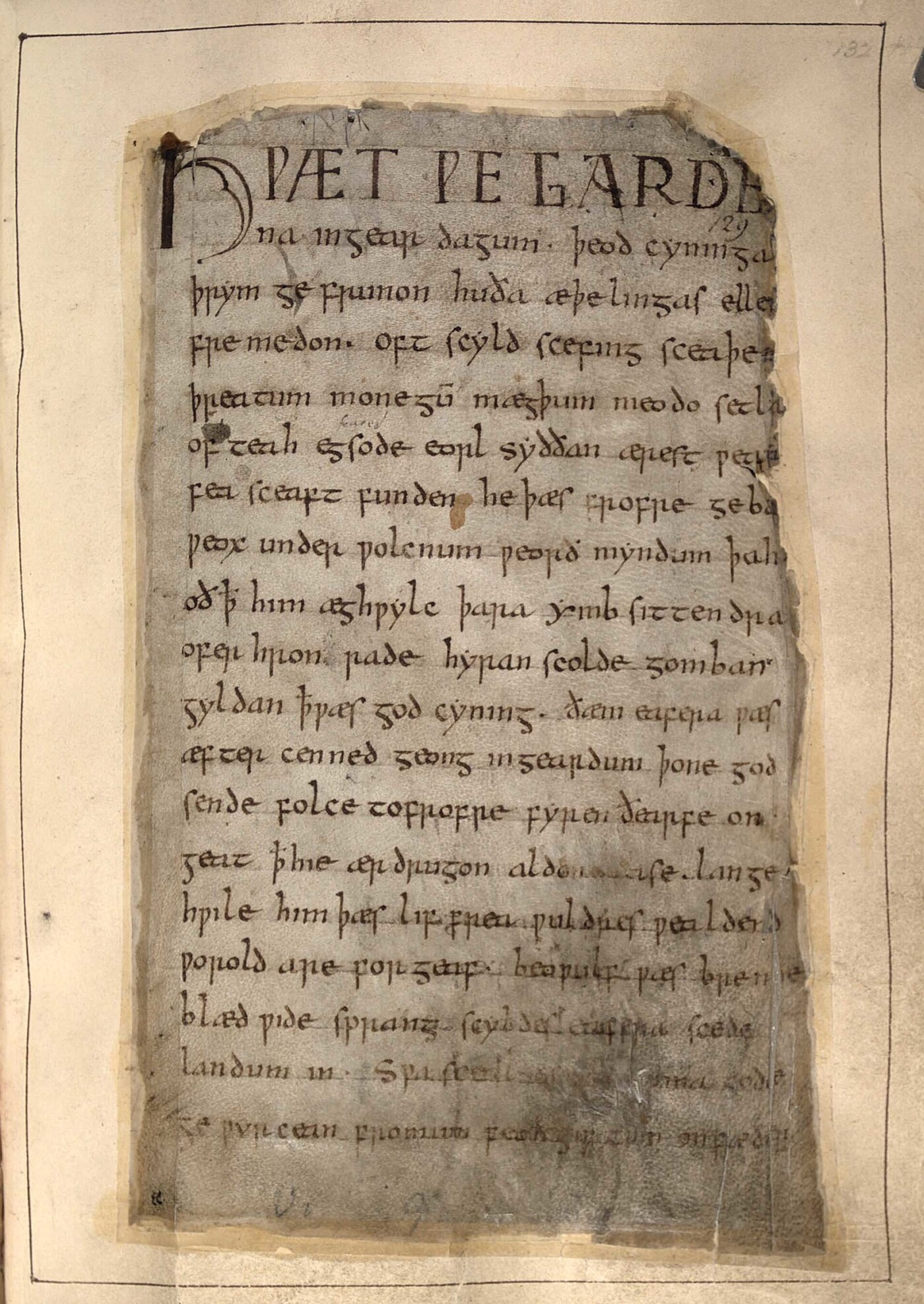 "This text has long been perceived as a masculine text," says Maria Dahvana Headley. "It's been perceived as: Oh that's about men and war. But I think this text is as much about domesticity ... it's a text about home." The Beowulf manuscript above is thought to be approximately 1,000 years old.

There's a vitally important word in the epic tale of Beowulf and, according to Maria Dahvana Headley, it's been translated incorrectly for a very long time. The word is aglæca/æglæca — no one's entirely sure how to pronounce it – and, as Headley explains, that same word is used to describe Beowulf and his three antagonists: Grendel, Grendel's mother, and the dragon.

"In the early English translations it was translated for Beowulf as 'hero' and for Grendel as 'monster,' and for Grendel's mother as 'wretch of a woman' or 'hag,' " Headley says. "But it's the same word."

That didn't sit well — particularly the characterization of Grendel's mother. "She's a woman with a sword," Headley explains. "She's a woman who fights. ... She's a noble woman. But none of that ends up in the translation because that's not as good a story for our culture."

Headley suspects the word really means "formidable" or "awe-inspiring" — and that's the picture she hopes to paint in The Mere Wife, a modern retelling of the Old English epic, set in the American suburbs.

On the way errors get compounded over centuries of translation

The translations in the 20th century of Beowulf are really wrong upon wrong. ... The way that the translations have run — they've been mostly male translators looking back and thinking, OK, well, I read that guy's translation and he's really a major scholar, he's really smart.

The translations in the 20th century of 'Beowulf' are really wrong upon wrong.

In the case of [J. R. R.] Tolkien, for example, who studied Beowulf for 40 years — he was working on a translation for a very long time and obviously he's brilliant — but he really received the idea that Grendel's mother was a monster and it was tempting to him. And I think that a lot of people went back and looked at his work and thought, well, he would know.

On focusing her story around the character of Grendel's mother

Grendel's mother is way more hardcore than Grendel is. She is amazing with a sword. She's really strong and Beowulf has to get very armored up in order to fight her — and he kind of only wins by luck. ...

No one had really written a book about Grendel's mother. We have John Gardner's Grendel which is from the [point of view] of Grendel ... but in that book Grendel's mother is kind of a furry beast who doesn't even have any language. Grendel is brilliant and his mother is ... a monster. So I was interested in taking this in a different direction and portraying Grendel's mother as a human. 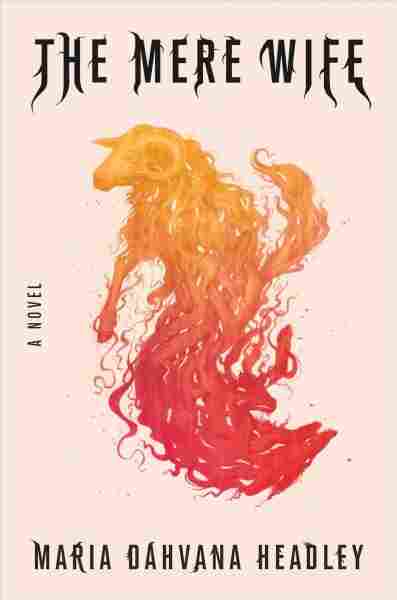 On her suburban adaptation, in which Grendel's mother is a veteran named Dana Mills

She has pretty bad PTSD. She doesn't know exactly what happened to her in the war. She's been kidnapped and held and has returned back into society. ... She is pregnant and she doesn't know how she got pregnant. ... She runs back to where she came from ... and around the mountain is a new development called Herot Hall which is a gated community which has taken over the place where Dana grew up. So she ends up living in a cave on the mountain which is overlooking this fancy, shiny gated community. ... She gives birth to her son and has — for many good reasons — a lot of fear about their place in the world and whether or not they will be able to be integrated with society at all. ... So they are in isolation but looking down at the sort of glittering capitalist grandeur of America.

The world is so full of profound injustice to young people of color ... in this book Dana Mills and her son Gren are both people of color. ... I started writing this book in 2015 looking at every headline, thinking, how are we still here?

Ben Woolf, the Beowulf character, is based very much in the original Beowulf. He's a soldier, he's a veteran, he's become a police officer — he wants glory. And I think the story of Beowulf is a story about a man who wants glory. He comes as a mercenary to kill monsters. ... He wants to be respected as a strong, good man. ... I thought, OK, what equivalents do we have in contemporary American society?

'Beowulf' Sexes Up, Dumbs Down An Epic

On adapting the role of the wife of Hrothgar, King of the Danes, to Willa — a wealthy woman living in the subdivision

She's a suburban housewife who's sort of holding the glamour of suburbia together. ... I was interested in writing about the ways in which female roles are sort of doubled down upon. ... We now have the lovely housewife role which [thanks to social media] is hashtagged and ... filtered to make it look even more perfect and perfect to excess. ...

Dana Mills has none of that. She's living just on ... trapped animals, she doesn't have electricity. She's living in a very survivalist kind of fashion on this mountain without any of the accouterments of modern American society. I'm interested in looking at the juxtaposition between extreme class imbalances that are right next to each other in this country.

Many of these canonical texts have been kind of misinterpreted as just exclusively masculine when really many of them are about love ...

On working on her own translation of Beowulf

People often interpret our work [the work of women] as: Oh, they're just writing about the small domesticity, the little stories of the home. And I think so many of the big stories are the big stories of the home. I think that many of these canonical texts have been kind of misinterpreted as just exclusively masculine when really many of them are about love, and about how to sustain it, and how to sustain life with a family. I am interested in that perspective and scholarship. I'm interested in women coming in and saying: Here's what I see that maybe you didn't see.

Hiba Ahmad and Barrie Hardymon produced and edited this interview for broadcast. Beth Novey adapted it for the Web.