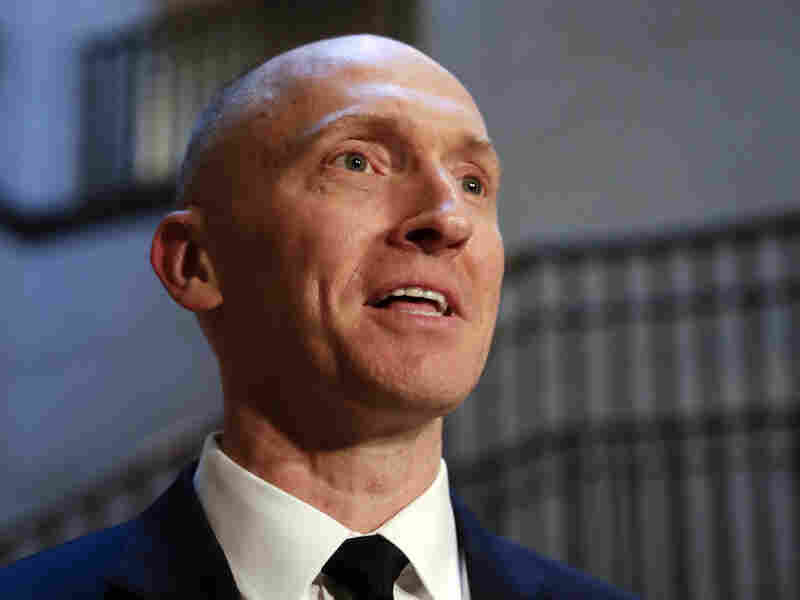 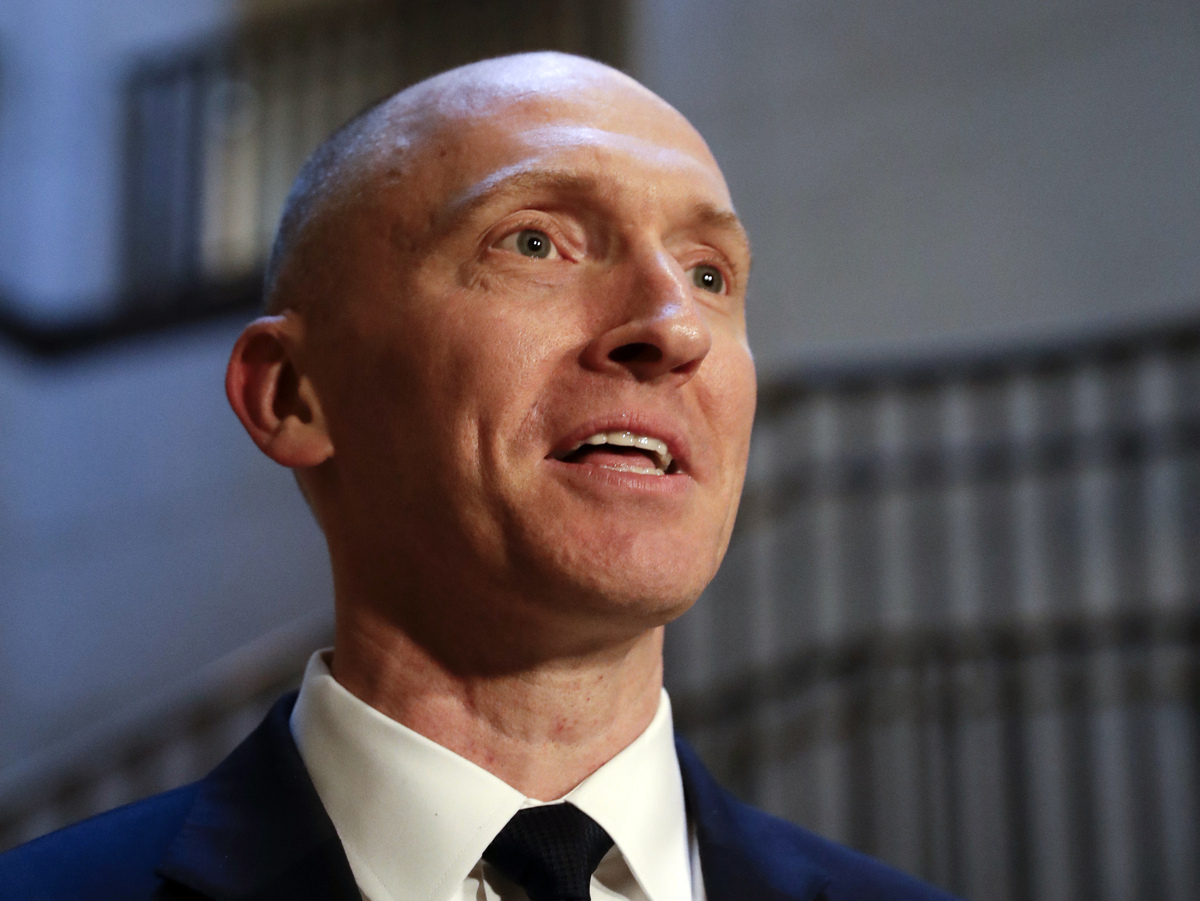 Carter Page speaks with reporters in November 2017 following a day of questions from the House intelligence committee on Capitol Hill in Washington.

The Trump administration released previously classified documents Saturday related to the FBI wiretapping of onetime campaign adviser Carter Page. Republicans say the documents reveal the FBI relied on an anti-Trump source for its decision, while Democrats say the warrants underscore murky and possibly criminal connections between the Russian government and the Trump campaign.

In the 412 heavily redacted pages of documents, Carter Page is described as an agent of a foreign power. "The FBI believes Page has been the subject of targeted recruitment by the Russian Government," the document reads. Then, after several words are blacked out, it resumes with "undermine and influence the outcome of the 2016 US Presidential election in violation of US criminal law."

Page spoke Sunday on CNN and said the claim that he was targeted by Russians is "totally unreasonable."

He called the documents "so ridiculous, it's just beyond words" and "literally, a complete joke."

The documents were published after The New York Times and other news organizations submitted Freedom of Information Act lawsuits for them.

The warrants describe a trip Page took to Russia in 2016 to speak at the New Economic School. While there, the FBI claims, Page met with two Russian officials in secret. Page allegedly met with Igor Sechin, president of Rosneft and close to Russian President Vladimir Putin. The two men reportedly discussed lifting Western sanctions that were imposed on Russia in retaliation for Russia's attempts to destabilize Ukraine. The warrant also described Page secretly meeting with Igor Nikolayevich Divyekin, who allegedly discussed giving compromising material on Hillary Clinton to the Trump campaign.

The FBI cites "Source #1" for that information; that refers to former British intelligence agent Christopher Steele. The document adds that "The FBI speculates that the identified US person was likely looking for information that could be used to discredit [Trump's] campaign." Still, the warrant notes, "the FBI believes Source #1's reporting herein to be credible."

Steele compiled a dossier that contained salacious information about then-candidate Trump. His research was commissioned by Fusion GPS, which was first paid by anti-Trump conservatives, then the Democratic National Committee. Steele, a Russia expert, has reported that he believed Trump was being "blackmailed." The FBI warrants note that Steele released his findings to U.S. news organizations over admonishment of the FBI, and as a result, the bureau ended its relationship with him. The warrant reads, "Nevertheless, the FBI assesses Source #1 to be reliable."

Republicans have argued that the warrants show the FBI and Justice Department were biased against the Trump campaign. On Sunday, President Trump tweeted that the documents "confirm with little doubt that the Department of 'Justice' and FBI misled the courts. Witch Hunt Rigged, a Scam!"

Congratulations to @JudicialWatch and @TomFitton on being successful in getting the Carter Page FISA documents. As usual they are ridiculously heavily redacted but confirm with little doubt that the Department of “Justice” and FBI misled the courts. Witch Hunt Rigged, a Scam!

Democrats say the documents show the opposite: the FBI acting on reports of criminal activity by a Trump associate.

Rep. Adam Schiff, D-Calif., the ranking member of the House Permanent Select Committee on Intelligence, said the documents "affirm that our nation faced a profound counterintelligence threat prior to the 2016 election" and that authorities "took appropriate steps.

"FBI and DOJ would have been negligent had they not used all the tools at their disposal, including Court-authorized FISA surveillance, to protect the country," Schiff added in a statement.

He lamented that the materials were released during a pending investigation.

Earlier this month, the Justice Department charged 12 Russian intelligence officers with acts related to Russia's hacking of the DNC's emails and targeting of state election systems. Deputy Attorney General Rod Rosenstein said the Russians were accused of a sustained cyberattack against the Democratic Party and Hillary Clinton's campaign.

Some in the GOP doubt Trump's claim that the FBI documents show he is a target of what he calls a witch hunt. Florida Republican Sen. Marco Rubio said Sunday on CBS's Face the Nation that he agreed with authorities that wiretapping Page was justified.

"So they look at all this information and say we have a guy here who is always in Russia, brags about Russia, and we have reason to believe and they list those reasons why this is someone we should be watching and they follow the legal process by which to do so. I think that's different from spying on a campaign."

Page himself wrote in a 2013 letter that he was an informal adviser to the Russian government on energy issues. On Sunday he minimized that work, saying, "I might have participated in a few meetings that a lot of people including people in the Obama administration were sitting on" but said "there was nothing in terms of any nefarious behavior."

The FBI noted stories published in U.S. media that confirmed Page's two meetings and revealed candidate Trump's softening stance on Russia. This included his seeming support for Crimea as a Russian territory, support for lifting sanctions on Russia and an attempt to make sure the GOP would not promise to arm Ukraine against Russian intrusion.

The FBI noted that Page sent a letter to the bureau's director and denied the meetings.

Page reiterated that denial on Sunday morning on CNN. Of the alleged meetings with Sechin and Divyekin, he said, "both of whom I've never met, spoke with, communicated with in my entire life."

Page said the claim that Divyekin offered compromising material on Hillary Clinton was "preposterous." He said sanctions were a common topic of conversation when he visited Russia in 2016.

"A few people might have brought it up in passing, but again, it's a major economic issue. There may have been a loose conversation," Page said on CNN.

The request to wiretap Page noted that the resulting information could produce evidence of crimes. However, it noted the bureau was searching for information "that relates and is necessary to the ability of the United States to protect against clandestine intelligence activities by an intelligence service or network of this foreign power."