Accessibility links
'Rescuing The Rescuers': Stranded Syrian White Helmets Evacuated By Israel In a "Hail Mary" operation, the Israeli military evacuated hundreds of Syrian rescue volunteer workers to Jordan amid the Syrian regime's offensive against rebel-held parts of the country. 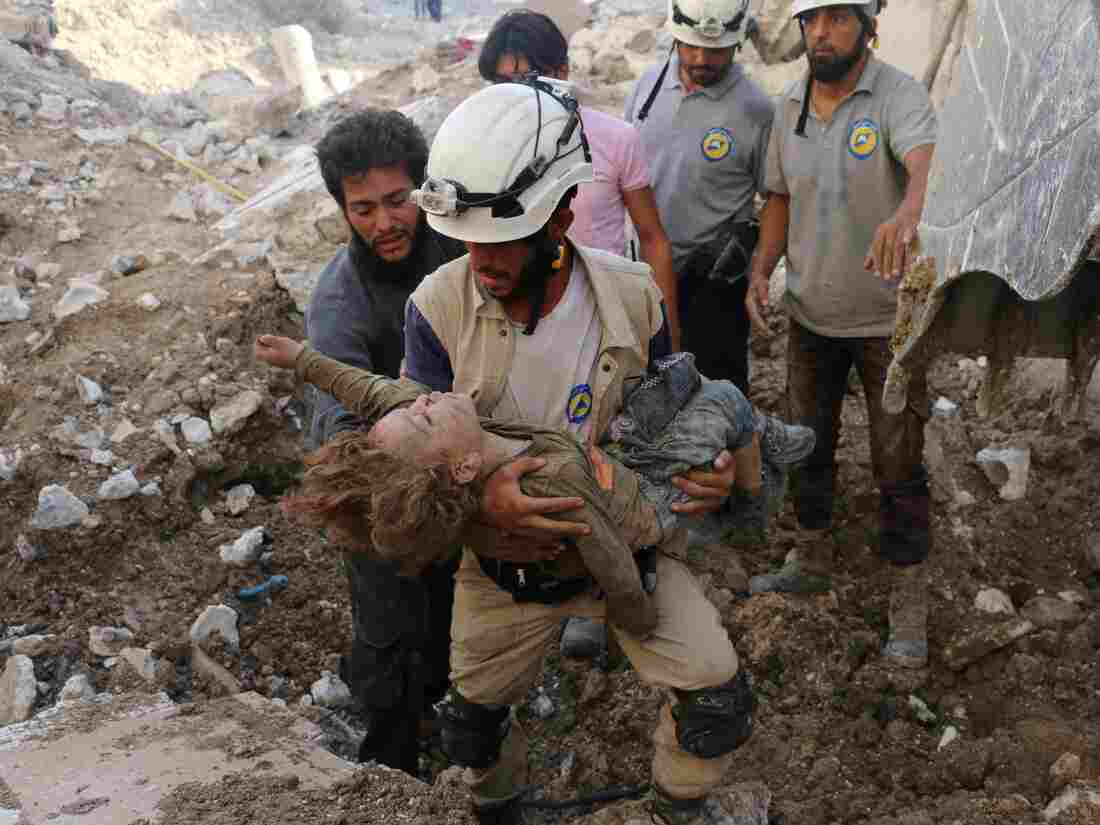 A Syrian Civil Defense volunteer, known as the White Helmets, holds the body of a child after he was pulled from the rubble following a government forces airstrike on the rebel-held neighborhood of Karm Homad in the northern city of Aleppo on Oct. 4, 2016. Ameer Alhalbi /AFP/Getty Images hide caption 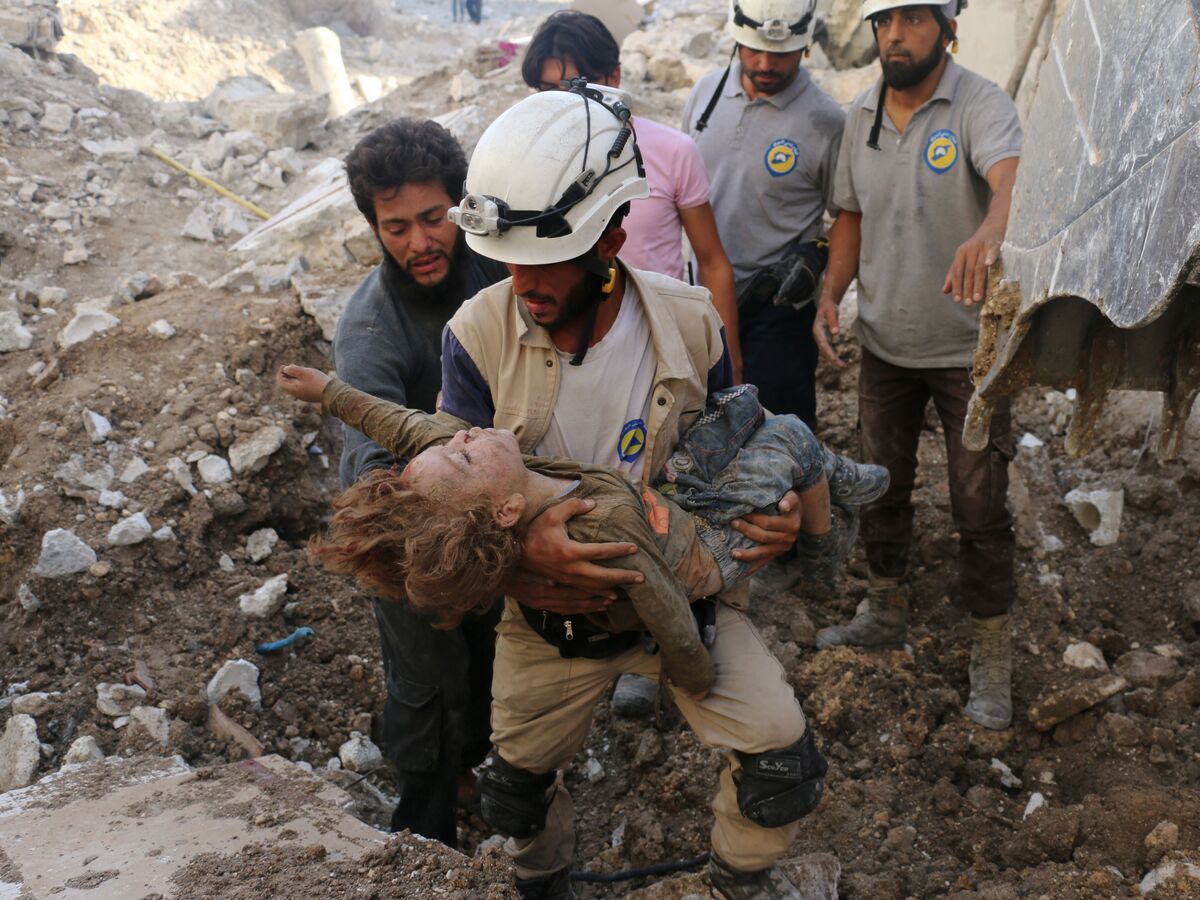 A Syrian Civil Defense volunteer, known as the White Helmets, holds the body of a child after he was pulled from the rubble following a government forces airstrike on the rebel-held neighborhood of Karm Homad in the northern city of Aleppo on Oct. 4, 2016.

Hundreds of Syrian rescue workers from the United States-backed White Helmets group have been evacuated through Israel into Jordan, escaping an onslaught by the regime of Syrian President Bashar Assad on one of the last opposition strongholds in the country.

The Israeli military said it carried out the "humanitarian" evacuation – its first such intervention in Syria's eight-year war, after a request of the United States and European allies. Jordan's state news agency said the evacuees will remain in the country for approximately three months and then be resettled to Canada, Britain and Germany.

"It was a night of rescuing the rescuers. There's a real sense of tragedy that this had to happen at all. But also, a real joy that it took place," a source close to the evacuation told NPR. They asked not to be named because they did not have permission to speak publicly.

The White Helmets rescue group operates mainly in opposition-held parts of Syria and acts like an informal emergency services in areas devastated by war. After this evacuation, there remain more than 3,000 members in the country, many of whom are civilian volunteers, who travel to the scenes of airstrikes and other bombardments to rescue those trapped in the rubble.

The evacuations from Quneitra province happened amid an offensive by the Syrian regime and its allies to take back rebel-held parts of southwest Syria. The White Helmets volunteers had been stranded along the frontier with the Israeli-occupied Golan Heights.

Jordan, which has closed its borders to refugees, says it had permitted the United Nations bring in 800 rescue workers and their families into the country. Raed Saleh, the head of the Syrian Civil Defense, as the White Helmets are formally called, confirmed the evacuations took place but would not elaborate on the numbers of people who got out.

The informed source close to the operation told NPR that only 422 people actually made it out of the country, because of heavy fighting on the ground.

"Given the speed of the movements on the ground it really was a Hail Mary operation," he said. "We communicated to [White Helmets] teams across south Syria that there was this hope, this prayer, of a window to get them out."

The Syrian government, backed by its ally Russia, has seized back control of much of southwest Syria, the area where the insurgency against President Assad first began in 2011. They have reclaimed the Syrian side of the Jordanian border and taken back the frontier with the Israeli-controlled Golan Heights.

The source said many of the rescuers and their families had made dangerous journeys across a war zone to reach the evacuation point. The evacuees included someone who broke a leg en route, and a mother who gave birth just moments before she was taken across the border.

The United States has contributed some $30 million in assistance to the group, which has also received funds from the U.K. and other countries. Both the U.S. and the U.K. helped the multicountry effort to coordinate their escape from Syria.

"The White Helmets have saved over 115,000 lives during the Syrian conflict, at great risk to their own," Jeremy Hunt, the British foreign secretary, and Penny Mordaunt, the U.K.'s international development secretary said in a joint statement.

"White Helmets have been the target of attacks and, due to their high profile, we judged that, in these particular circumstances, the volunteers required immediate protection. We therefore took steps with the aim of affording that protection to as many of the volunteers and their families as possible."

The United Nations says more than 300,000 Syrians have likely been displaced since the government offensive began in southern Syria in June. Many have amassed near sealed borders with Israel and Jordan, and are surviving high desert temperatures with little more than a tent or informal shelter for protection.

Last week, the Syrian regime reached a deal through which the rebel groups in the area, defeated and encircled, could surrender. Over the weekend, thousands of armed men and their families boarded on buses to northern Idlib province, where the opposition still holds territory.

The rescue workers and their families who evacuated to Jordan will now be resettled abroad. Many live and work in the northern rebel held province of Idlib, an area that continues to be heavily bombarded by the Syrian government and its allies.

Civil defense workers in that area turned down requests for an interview about the evacuations of their colleagues in the south calling the matter "too sensitive." For now, the source close to the evacuations told NPR, there are no plans to evacuate them too.