Accessibility links
Tronc Slashes 'New York Daily News' Staff By Half Tronc cited financial pressures in gutting the newsroom of the punchy New York City tabloid, a major force in local coverage. It has won Pulitzer Prizes and been a thorn in President Trump's side. 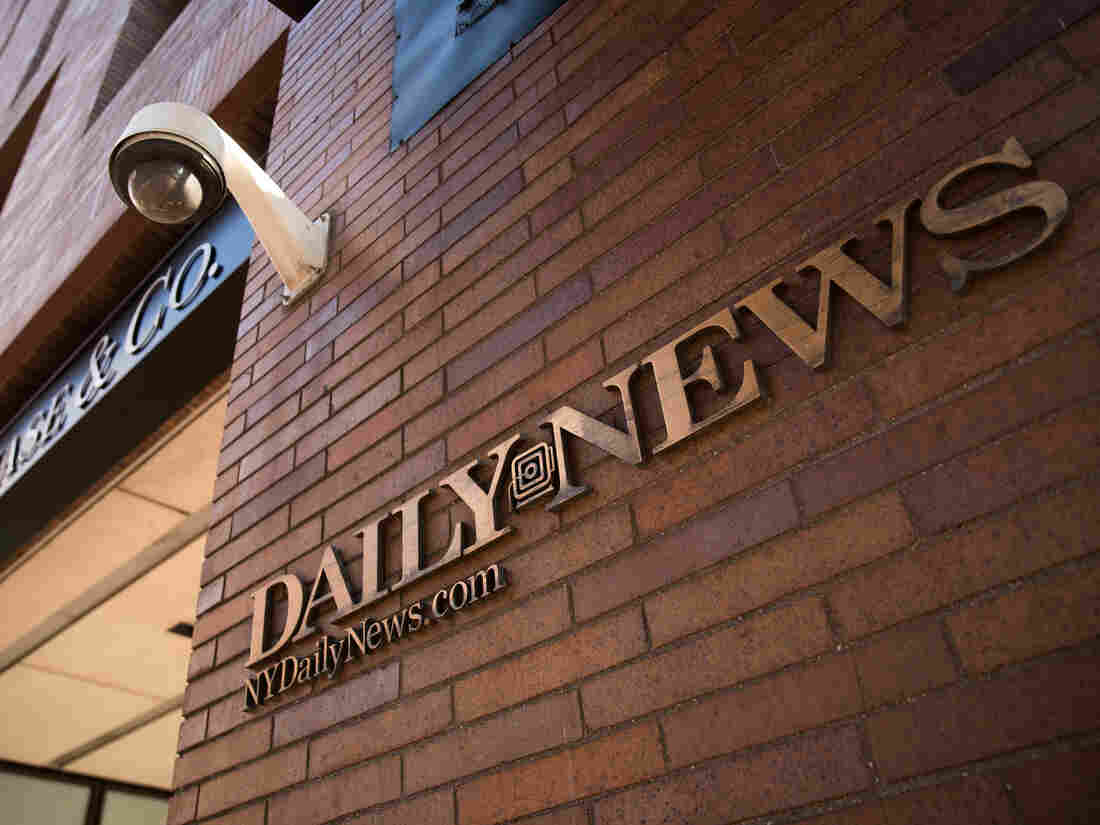 Tronc cited financial pressures in gutting the New York Daily News, a major force in local coverage. It has won Pulitzer Prizes and been a thorn in President Trump's side. Drew Angerer/Getty Images hide caption 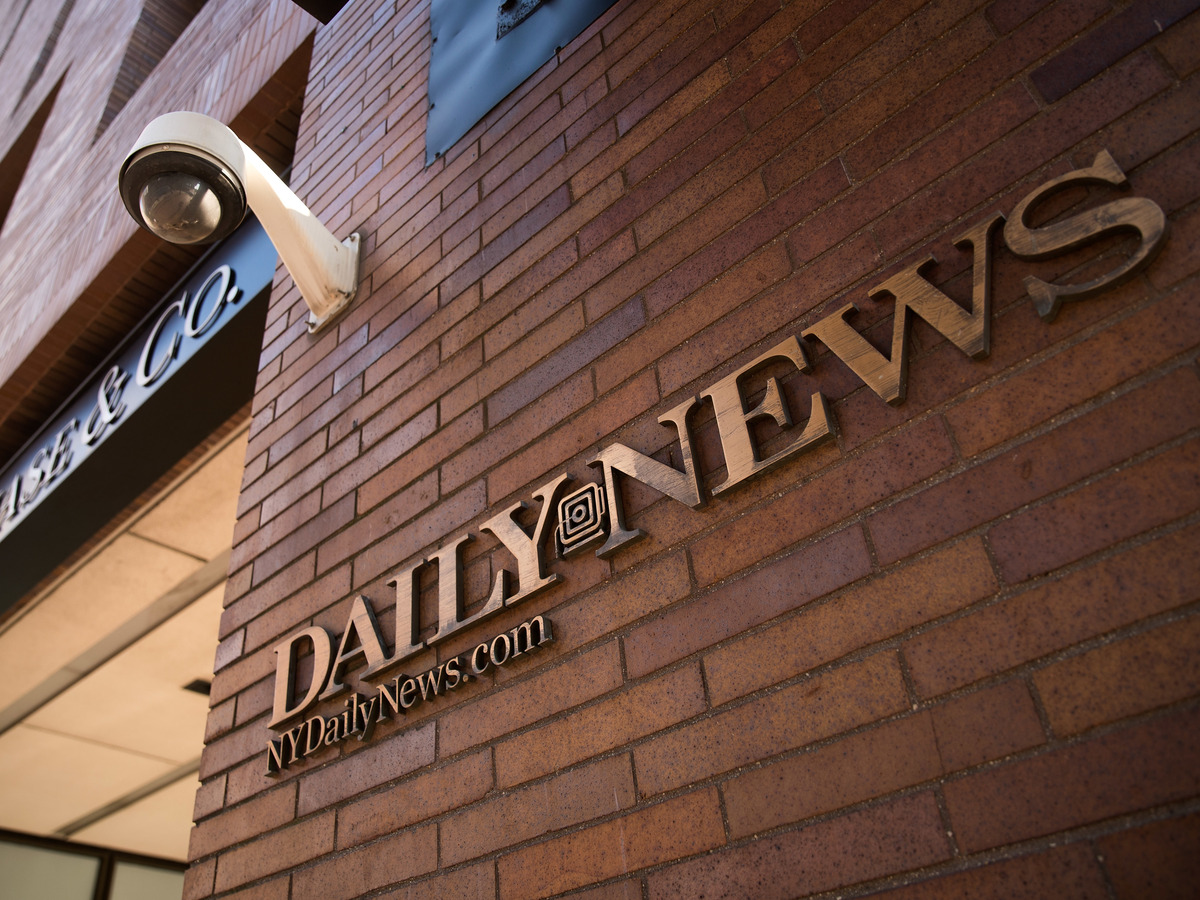 Tronc cited financial pressures in gutting the New York Daily News, a major force in local coverage. It has won Pulitzer Prizes and been a thorn in President Trump's side.

The newspaper publishing company Tronc has moved to slash the New York Daily News newsroom, announcing cuts of 50 percent to the paper's editorial staff, according to an internal memo obtained by NPR and other news outlets.

The staff learned of the cuts Monday morning from a memo emailed from the paper's "talent engagement" account. It said the moves were necessary to seize the opportunities of digital news and financial challenges ahead. A Tronc spokeswoman confirmed the veracity of the memo.

Tronc said in the memo that the Daily News would be "re-focusing much of our talent on breaking news — especially in areas of crime, civil justice and public responsibility."

Tronc purchased the famed New York City tabloid last fall for $1 in a reunion of sorts; the paper was founded by Tronc's corporate predecessor, the Tribune Co., in 1919 and sold off in 1991. The Daily News endured waves of cuts under subsequent owners and declining paid circulation in recent years though it has remained on most lists of top 10 circulation papers in the U.S.

Tronc is the owner of other papers in Chicago, Baltimore, Hartford, Florida, and Virginia, among others. Tronc's continuing cuts and shift in emphasizing quick-turn pieces for digital audiences led to successful unionization drives at both the Los Angeles Times and the Chicago Tribune, then its two largest papers, earlier this year. Tronc subsequently sold the LA Times.

Last fall, the Chicago Tribune called Tronc's acquisition of the Daily News "a stunning and bold bet on the future of newspapers." Tronc's CEO (and now chairman) Justin Dearborn said at the time, "We expect it to benefit greatly from becoming part of the Tronc ecosystem."

The move now to gut the Daily News's newsroom will be a blow to local watchdog journalism in the nation's largest city. It has retained a punch in local news at a time when the The New York Times and The Wall Street Journal have retreated from metro coverage.

The Daily News won a Pulitzer Prize last year, its 11th, with ProPublica, for its exposure of how the New York Police Department used an obscure civil enforcement law to evict hundreds of poor people from their homes without their being able to challenge the move first. The paper has also made a meal of the Donald Trump presidency from the populist left, depicting the New York-based real estate developer, long familiar to readers of its gossip pages, as a malevolent, autocratic and cartoonish figure.

If you hate democracy and think local governments should operate unchecked and in the dark, then today is a good day for you.

Former Daily News editor-in-chief Jim Rich was rehired as the tabloid's editor after Tronc acquired it last September. Rich and Managing Editor Kristen Lee are out as part of the cuts. Rich made his anger toward the cuts known on Twitter, first by tweeting early Monday morning: "If you hate democracy and think local governments should operate unchecked and in the dark, then today is a good day for you."

He subsequently changed his Twitter bio to this: "Just a guy sitting at home watching journalism being choked into extinction."

Below is the Tronc memo:

Since the year began, we've worked hard to transform the New York Daily News into a truly digitally-focused enterprise – one that creates meaningful journalism, delivers it more quickly and more frequently, and develops new approaches to engage our readers. We've gained a deeper understanding of our readership. We've redefined our structures. But we have not gone far enough.

To capture the opportunities ahead and address the significant financial challenges we have faced for years, we are fundamentally restructuring the Daily News. We are reducing today the size of the editorial team by approximately 50 percent and re-focusing much of our talent on breaking news – especially in areas of crime, civil justice and public responsibility. We know our readers look to us for a unique point of view, and we believe these topics offer our best opportunity to differentiate our reporting. We will, of course, continue to cover local news, sports and other events, but our approach will evolve as we adapt to our current environment.

With our established digital prowess, the Daily News is in a solid position to lead tronc's transformation and become the newsroom of the future. But realizing that potential requires committing to our digital audience and focusing our resources on the content and approaches that our readers find most relevant.

I know this is difficult news to hear and want to assure you we are working hard to treat each employee with respect and to make the transition as smooth as possible. With the exception of a few particular employees who are not in the office today, Human Resources will communicate with everyone leaving the Daily News by the end of the day. While our colleagues exiting the business will leave immediately, they will continue to be paid for the next 90 days and be eligible for transitional benefits after that.

I hope you will all join me in thanking our departing colleagues for their many contributions to the Daily News and wishing them well in their future endeavors. The decisions being announced today reflect the realities of our business and the need to adapt an ever-changing media environment. They are not a reflection on the significant talent that is leaving today. Let there be no doubt: these colleagues are highly valued and will be missed.

Among the changes, Jim Rich and Kristen Lee will be departing. Both of them have handled their responsibilities with professionalism and grace under difficult circumstances, and we wish them the best.With that, I am pleased to announce that Robert York will be joining us as editor-in-chief, effective July 30. I have had the pleasure of working extensively with Robert over the course of this year, when he served as publisher and editor of the successful Morning Call news properties in Allentown, PA. Prior to that, Robert was the vice president of strategy and operations at the San Diego Union Tribune where he was a major contributor to their successful reimagining of the business.

I know that many of you will have questions, and we are committed to answering them as quickly as possible. Our editorial leadership is also hearing the news for the first time today, so we will be spending time this morning to help them better answer your questions and support you during the day. Thank you in advance for your patience, understanding and professionalism as we work through this vital transformation.