Accessibility links
Deadly Wildfires Sweep Through Towns Near Athens, Greece Firefighters were battling flames near the seaside town of Kineta, about 35 miles west of Athens, and around the towns of Pendeli and Kalamos in the north. 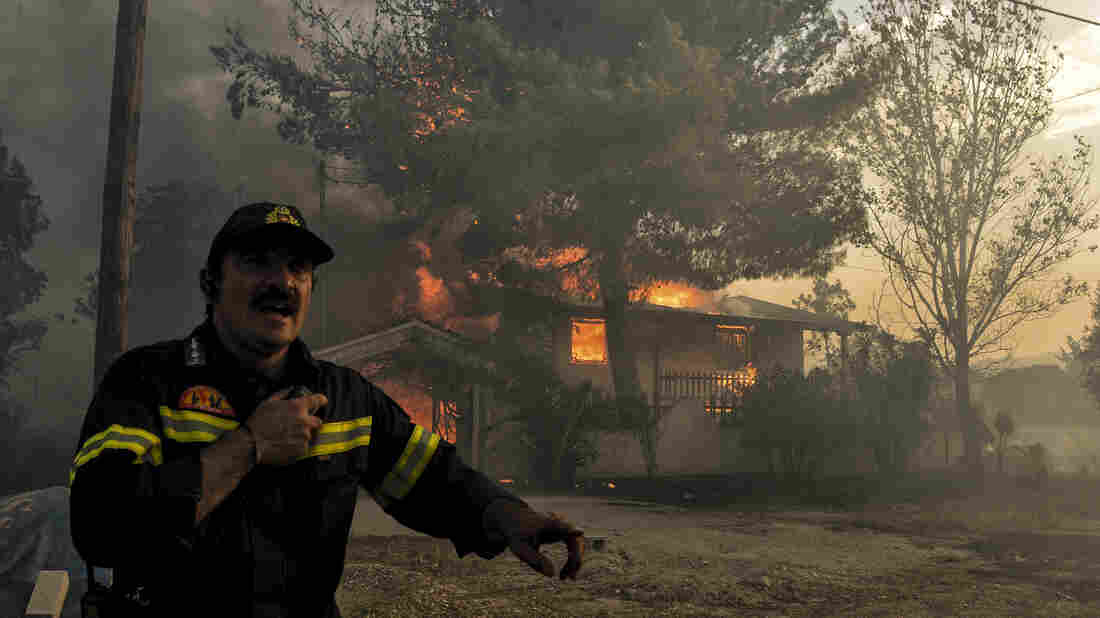 A firefighter next to a house burning during a wildfire in Kineta, near Athens, Greece, on Monday. Wildfires are not new to Greece but several blazes erupted especially quickly. Valerie Gache/AFP/Getty Images hide caption 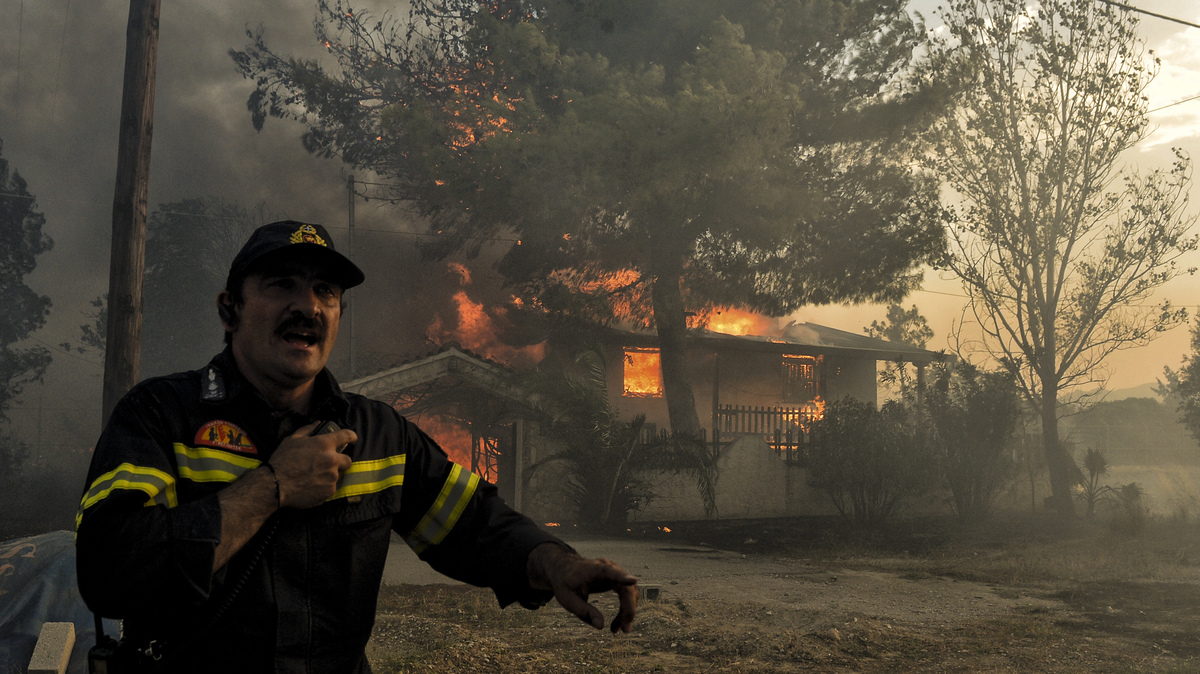 A firefighter next to a house burning during a wildfire in Kineta, near Athens, Greece, on Monday. Wildfires are not new to Greece but several blazes erupted especially quickly.

At least 50 people died and more than 150 were injured as huge fires fueled by powerful winds burned homes and forests in towns near the Greek capital, Athens, government officials said.

After authorities confirmed at least 24 dead on Monday, Greek Red Cross workers made a gruesome discovery close to a beach not far from the badly-burned village of Mati.

Greece has declared a state of emergency. Several European Union countries, as well as Israel, have offered to send help.

Greek firefighters battled the flames throughout the night near the seaside town of Kineta, about 35 miles west of Athens, and around the towns of Pendeli and Kalamos in the north.

Greek Prime Minister Alexis Tsipras cut short his visit to neighboring Bosnia and quickly returned to Athens. He told reporters that his government will do "whatever is humanly possible to control" the fires.

He also pled with Greeks in affected areas to leave immediately. TV footage showed several trying to fight the fires with garden hoses or buckets filled with water.

"What's most important now is your life," he said. "Properties and material wealth can be replaced. Human lives cannot."

Wildfires are not unusual during Greece's hot, dry summers. Dozens of people died during an especially fiery summer in 2007.

But Monday's blazes near Athens spread so quickly, they seemed to catch everyone off guard.

Giorgos Mathiopoulos, the head of Greece's emergency workers association, told reporters that one fire broke out around noon and the second around 5 p.m.

By early evening, a huge plume of smoke was visible on Acropolis hill. The sky glowed orange.

"People cannot tolerate so much smoke for so many hours," he said on state TV. "This is an extreme situation."

Motorists on the Athens-Corinth highway to the Peloponnese in southern Greece had to pull over because they couldn't see due to the thick smoke. Authorities closed the highway.

The seaside resort village of Mati, about 15 miles east of Athens, was nearly consumed by the flames. One resident told reporters she escaped the fire by jumping into the sea. Another compared it to Pompeii.

In Penteli and Rafina, northeast of Athens, children were evacuated from summer camps. SKAI TV news reported that residents and vacationers fled to nearby beaches in Rafina, where they were rescued by the coast guard. Ten panicked tourists, reportedly from Denmark, also fled a beach by boat. Five have been located and rescued.

At least three villages have been evacuated. Evangelos Bournous, the mayor of the seaside town of Rafina, told reporters that he had personally seen many homes go up in flames.

Firefighters also battled other fires around the country: on Crete, in the northern town of Soufli and near Corinth. On Sunday, there was also a fire on Skopelos, the island where the 2008 hit film Mamma Mia was shot.