Accessibility links
Plastic Pollution Crowds Out Life, Says Engineer Who Traces Ocean Trash To Its Source The engineer views a landfill as a living ecosystem, and the plastic that clogs it as a serious threat that crowds out life and never goes away. Can we eliminate the waste before it smothers us? 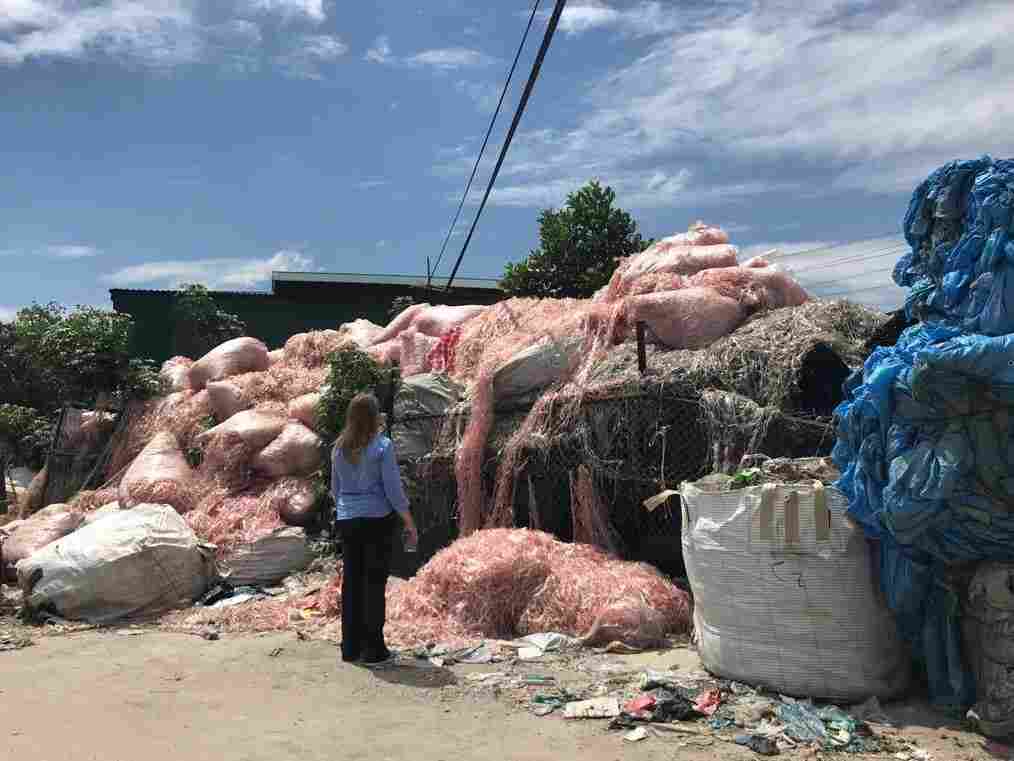 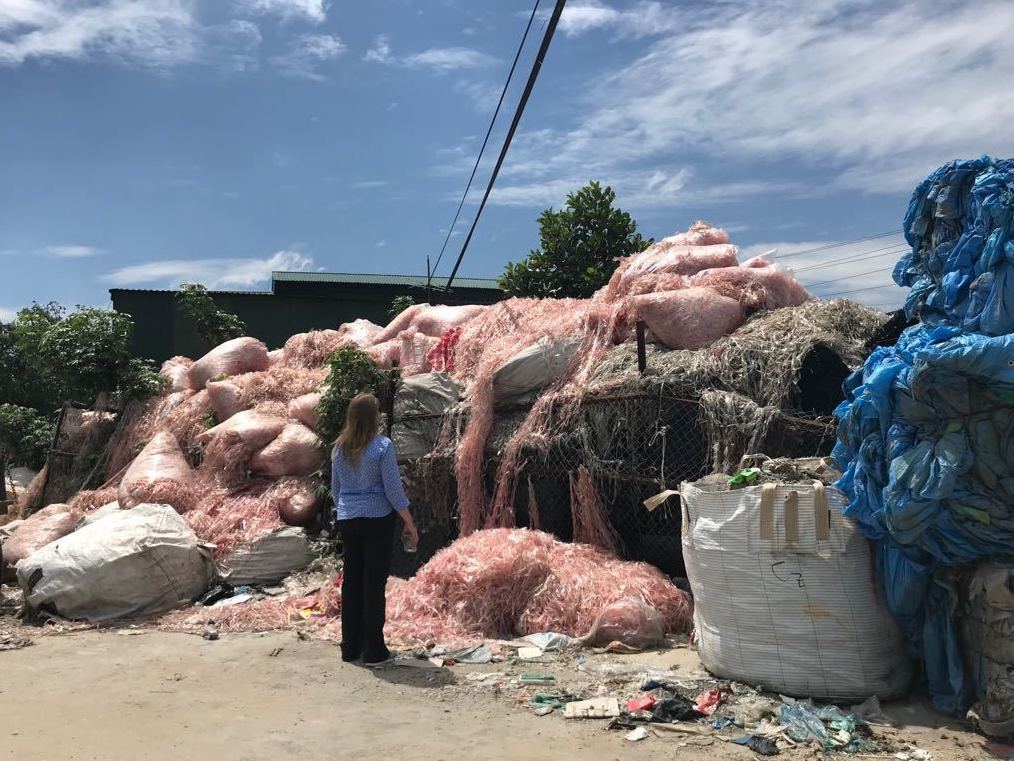 Waste engineer Jenna Jambeck of the University of Georgia surveys plastic waste in a southeast Asian village, where it will be recycled to make raw material for more plastic products. Jambeck advises Asian governments on how to keep plastic trash out of waterways.

When a huge floating gyre of plastic waste was discovered in the Pacific in the late 1980s, people were shocked. When whales died and washed ashore with stomachs full of plastic, people were horrified. When photographs of beaches under knee-deep carpets of plastic trash were published, people were disgusted.

Though some of it came from ships, most, presumably, was from land. But how much was coming from where?

No one really knew until 2015. That's when Jenna Jambeck, an environmental engineer at the University of Georgia, did the math. Her groundbreaking study suggested there were hundreds, and perhaps thousands, of times as much plastic washing into the sea as people were seeing in those ocean gyres.

When I first meet the scientist for an interview, the first thing she says is: "So what we're going to do for the next 24 hours is to record everything that you touch that is plastic."

My microphone has a plastic grip. "So let's write it down," she says with a smile and an air of efficiency.

We go through my recording kit: plastic ID card, the zipper on the bag, a plastic data card and the plastic audio recorder .... I can tell this is going to be a long day.

Jambeck started her career as an engineer specializing in solid waste management. She has become a connoisseur of trash, and what I carelessly call "the dump."

"Landfill!" she says, correcting me.

Her interest in trash started when she was growing up in rural Minnesota, Jambeck says. There was no garbage collection in her area, so she'd borrow a truck to take her family's trash to the dump every week.

"I was always pretty fascinated by going there and just seeing what I would see," she remembers. "I fell in love with studying waste."

Trash, she explains, has a history; each discarded teddy bear or broken bicycle has a story behind it. 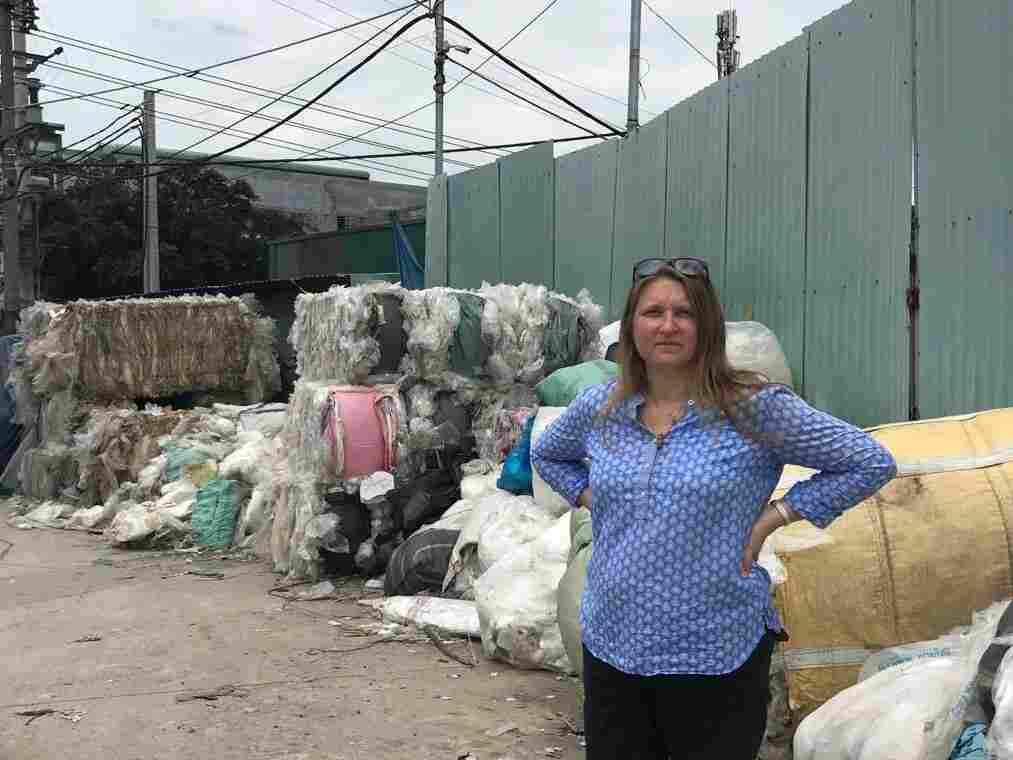 The single largest use for plastic is packaging, Jambeck says. At this recycling center in southeast Asia, much of the waste is thin-film plastic that was once used to package single-use beverage containers. Courtesy of Amy Brooks hide caption 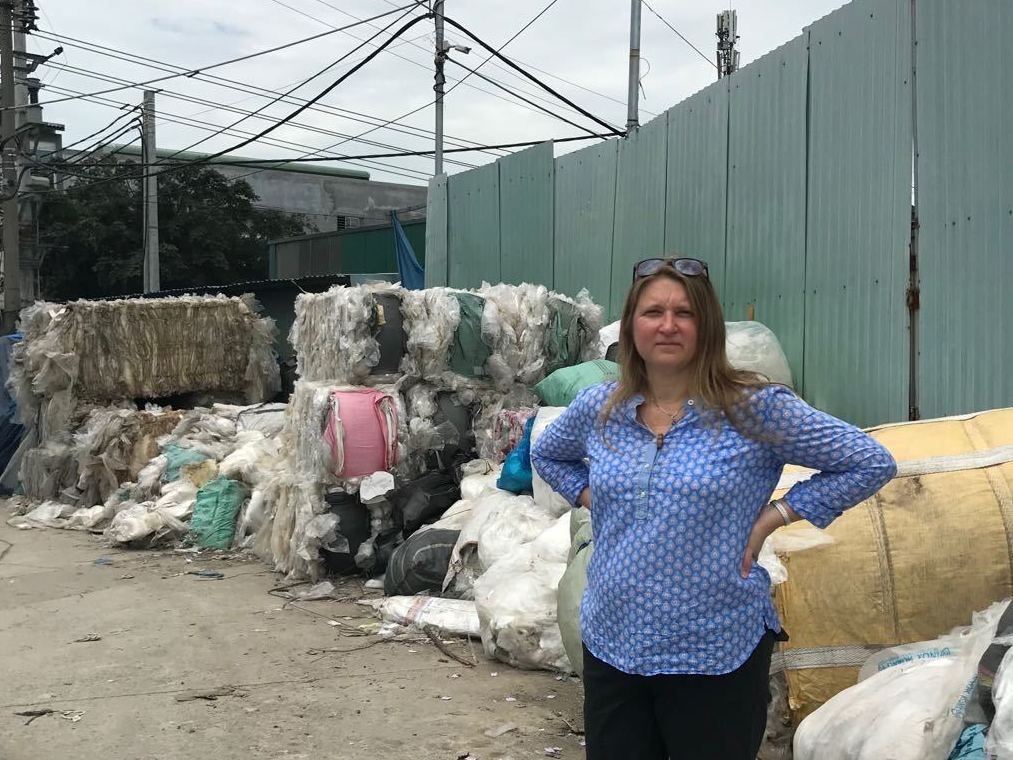 The single largest use for plastic is packaging, Jambeck says. At this recycling center in southeast Asia, much of the waste is thin-film plastic that was once used to package single-use beverage containers.

We drive out to her favorite landfill, just outside Athens, Ga., and Jambeck makes it clear that we're not just going to view the garbage pile from afar. We're going to climb up onto it.

"It's such a beautiful day out here," she says. That's true. The sky is brilliantly blue. There are also vultures hovering overhead, and the aroma is — challenging. The ground is mushy, but that doesn't slow Jambeck; she came prepared, wearing green rubber boots.

"All right, I want to go farther," she says. She wants me to get a better idea of what plastic does in a landfill. Or, rather, what it doesn't do.

To me, the several-acre mound is a pile of dirt and muck about 50 feet high. Trucks crawl over it, dumping their loads of trash in plastic bags. Miscellaneous objects poke up out of the ground.

But Jambeck sees something different.

"I see, like, a living breathing thing," she says. "This whole system is actually an ecosystem. Microbes break down the organic garbage into its constituent chemicals. Metal corrodes and dissolves. Almost everything returns to the earth. Except ...

"Plastic," she says with a sigh. "Plastic would be the thing that doesn't break down."

It's the intruder. I look a little closer and see that almost all the junk on the surface of this pile is made of plastic. "A container of toothpaste," Jambeck points out. "That looks like the top of a detergent bottle." There's PVC pipe. Water bottles. A chip bag.

There are numerous types of plastic. Over time, much of it will break down into smaller pieces. But no one knows how long those pieces linger in the environment.

When people discovered big floating patches of waste plastic in oceans, they wanted to clean it up. Jambeck agrees that the famous giant garbage patch in the Pacific is a nightmare. But upon seeing it, her thought was: Wait a minute. Let's find out where it's coming from.

If you leave the tap on and bathwater floods your home, bailing water isn't the first thing you do, she points out. You shut off the faucet.

"What we can do is keep plastic from going in the ocean in the first place," she says.

Jambeck worked with a team of scientists at the National Center for Ecological Analysis and Synthesis in California to find the sources of all that plastic. Their seminal paper, published in 2015 in the journal Science, produced new information and astounding numbers.

Most of the trash along beaches and in the ocean is single-use plastic, Jambeck says — cigarette butts, grocery bags, bottles and caps, straws, utensils and packaging. Historically, most of it has been produced in the West, but China is now the top producer, and exporter of plastic goods.

Many countries, including the U.S., contribute plastic pollution, and it all adds up. For example, in 2010 alone (the year's worth of data that Jambeck's Science study was based on), a total of 8 million metric tons of plastic entered the world's oceans.

The research made a big splash. In 2017, the Senate Environment and Public Works Committee invited Jambeck to testify about the problem.

Holding up a bag full of plastic trash, she explained to the senators that 8 million metric tons of plastic is equal to "a volume of five grocery-sized bags filled with plastic for every foot of coastline in the world."

She predicts the "8 million" could be 10 times as large by 2025, if current trends continue. Half of the waste comes from China, the Philippines, Indonesia and Vietnam. (Note: Though Vietnam puts nearly as much plastic into the ocean per person as China does, the Chinese population is so much greater than Vietnam's that China's overall contribution to total plastic in the ocean is much larger).

All these countries have growing consumer economies and haven't yet developed widespread and efficient methods of waste management. And they have lots of ocean-facing shoreline.

Research shows that the population density along the shoreline largely determines how much trash winds up in the ocean there: more people, more trash.

For Jambeck, the plastic litter in all our lives is a sign of society's failure.

It's our era's footprint, she says. "Is that really the story we want to tell future generations?"

Jambeck is trying to change that story.

In 2017, the U.S. State Department sent the "plastics ambassador" to advise other governments on how to manage plastic waste. She's also an adviser to the Ocean Conservancy, an environmental group working to stem the problem.

Jambeck helped develop an app called Marine Debris Tracker for smartphones so that anyone can report on where they find plastic debris, anywhere in the world. Her students at the University of Georgia use it to track plastic waste on campus.

"Now around the world people are reacting to that and trying to figure out what to do," she says.

Scientists in her laboratory, as well as many in the private sector, are looking to broaden and improve the range of biodegradable substitutes for plastic utensils or packaging.

In many places around the world, consumers and government leaders are starting to pay more attention to what they use and throw away, and what they can recycle, Jambeck says. She's collaborating with a team of scientists looking for a model for plastic waste management that communities can adopt.

And she still finds time to visit landfills, for sentimental reasons, among others: She was at a landfill in 2001 when she met the man who would become her husband. They were both doing research, digging into the very bottom of the landfill to see how things decomposed. To their surprise, they pulled up an immaculate piece of lunchmeat.

"It was a piece of bologna," she says with a laugh. How did she know?

"Because it looked exactly like a piece of bologna from a package."

And why did that surprise her? "Well, it still looked like a piece of bologna you could eat," she says with amazement. "It hadn't broken down."

A romantic "bonding moment," as Jambeck tells it, for this pair of professional garbage explorers. But she's a bit more hesitant to eat lunchmeat.

Meanwhile, the aroma at the Georgia landfill is ripening as the sun reaches its zenith, but Jambeck seems in no hurry to leave. A noisy truck groans up the bank with a fresh load for a waiting bulldozer and a compacter, and she wants to explain the process to me.

"So they're going to dump, and then the bulldozer is going to come and move it and then the compactor gets his turn to drive over it" — to compress it, to maximize how much waste can be stored here.

Our day isn't over. My plastic count is due. Back at Jambeck's office, we share the list. I touched 52 plastic items, all told: a credit card, restaurant menu, soap dispenser, my glasses, a ketchup container, an elevator button, a hotel chair — the list goes on and on.

In five minutes, she puts together graphs and a pie chart that show what kinds of plastic all these objects are made of — whether they can be recycled, and what sorts of plastic in the overall "taxonomy" of global plastic waste I've come in contact with that day.

"One of my goals," Jambeck says, "is to get people more in touch with, and to be thoughtful [about], the waste they generate."