Accessibility links
Tennessee Could Be A Bright Spot For Republican Women In 2018 Tennessee is one of just seven states that have never elected a woman as senator or governor. Reps. Marsha Blackburn and Diane Black are hoping to change that, but both face big hurdles first. 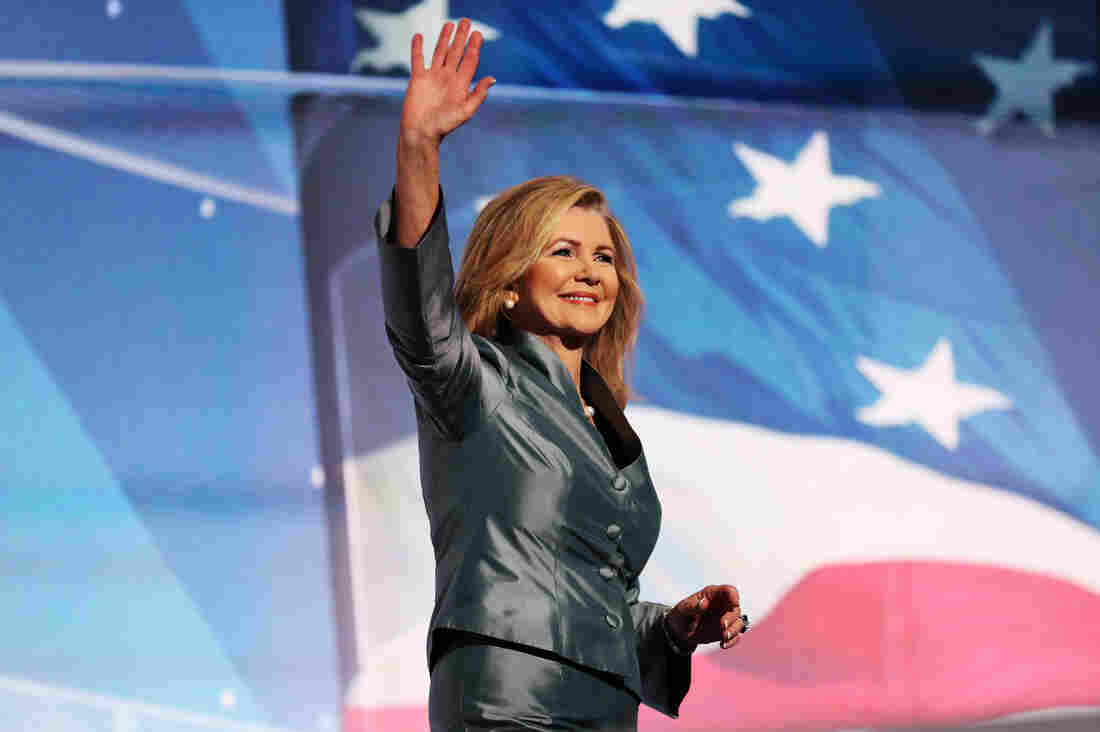 Rep. Marsha Blackburn gave a speech during the Republican National Convention in 2016. Blackburn is running against former Democratic Gov. Phil Bredesen in one of the year's most critical and competitive Senate races. Joe Raedle/Getty Images hide caption 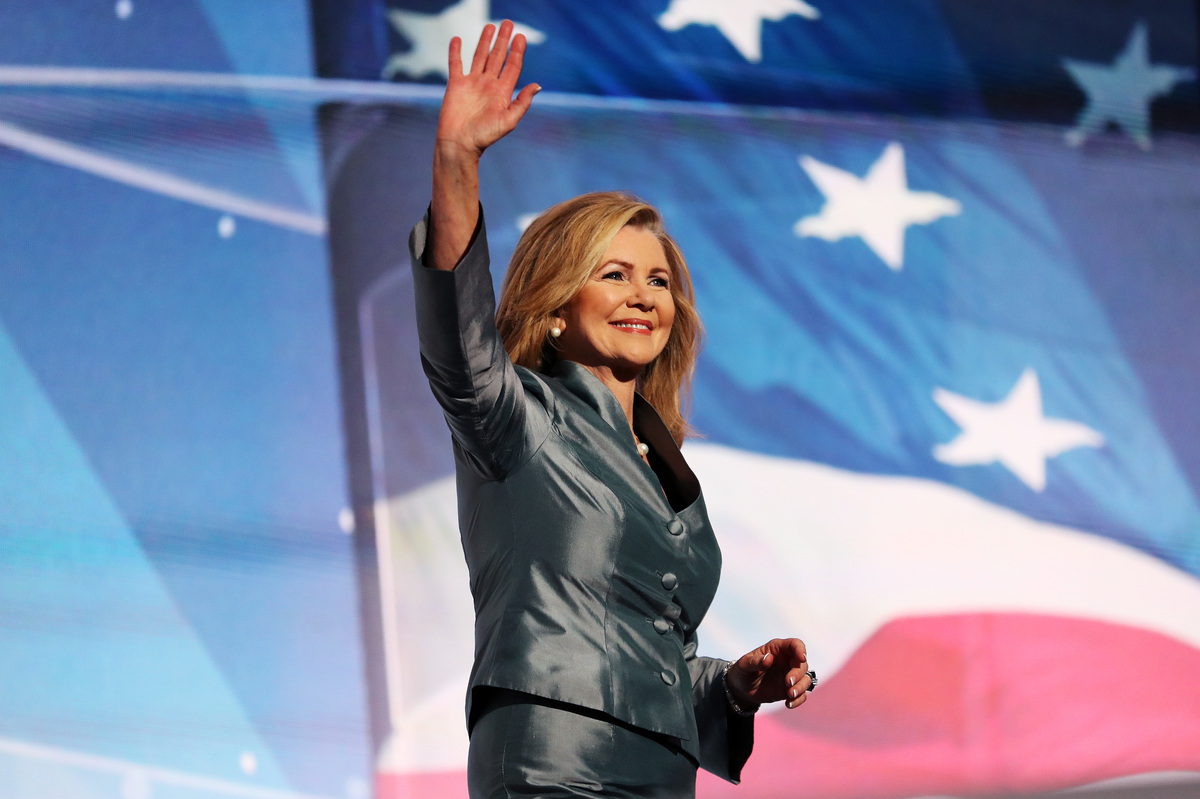 Rep. Marsha Blackburn gave a speech during the Republican National Convention in 2016. Blackburn is running against former Democratic Gov. Phil Bredesen in one of the year's most critical and competitive Senate races.

In an election year shaping up to be a good one for Democratic women candidates, Republican women could see their numbers drop after November. But one state where GOP women might find success is in Tennessee.

Rep. Marsha Blackburn will go up against former Democratic Gov. Phil Bredesen in one of the year's most critical and competitive Senate races. Rep. Diane Black is running for governor, though she first has to win a very competitive primary next week.

A win by either woman this fall would be historic for Tennessee, which is one of only seven states that's never had a female senator or governor.

But as both women crisscross the state, their gender rarely comes up with voters — and unlike many female Democratic candidates, it's definitely not something they're emphasizing.

"When I'm talking with Tennesseans, I say I'm the most well-qualified person for this position," Blackburn told NPR after a campaign event earlier this month at a bank in Portland, Tenn.

Marsha Blackburn, 'Politically Incorrect And Proud Of It,' Runs For Senate In Tenn.

Later that day, at a truck stop near Greeneville, Black relayed the same sentiment.

"People talk about that more than I do. I rarely talk about it," Black said about any potentially groundbreaking win.

But both women have broken gender barriers. During college, Blackburn became one of the first female saleswomen for Southwestern Company, a door-to-door book company that attracted many conservatives. She was rejected when she first applied because she was a woman, but the company finally hired her, though with a catch — she had to live at home in Mississippi with her parents, while the male salesmen were allowed to travel between cities.

Blackburn married and moved to Tennessee, where she would rise through local and state politics. Then in 2002, she became the first woman elected to Congress in Tennessee who hadn't followed her husband in the position. She jumped in the Senate race last year after Sen. Bob Corker announced his retirement. But when Corker was urged by some to reconsider that move amid concerns the more conservative Blackburn would jeopardize the GOP's hold on the seat, a spokeswoman for Blackburn forcefully pushed back that, "Anyone who thinks Marsha Blackburn can't win a general election is just a plain sexist pig."

Black grew up in public housing and was a single mother who worked the night shift as a nurse. She later remarried and with her husband founded a multimillion dollar drug testing company. Black eventually ran for the state legislature and then Congress, which led to her own historic milestones. 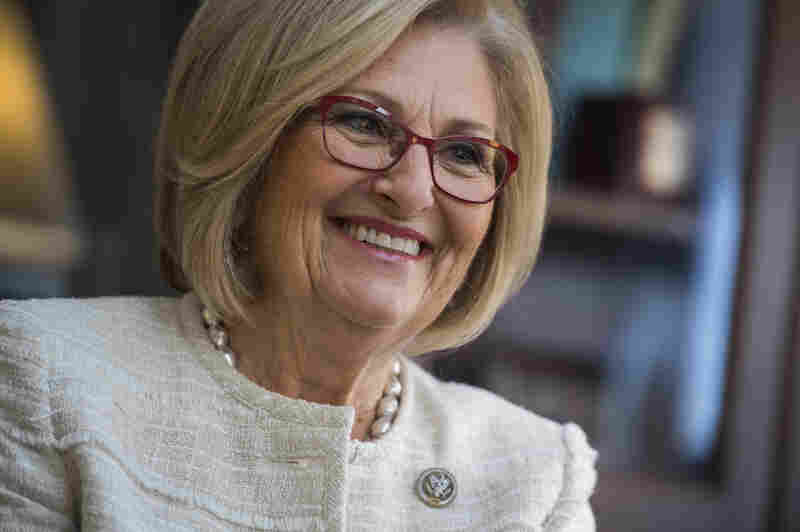 Rep. Diane Black is running for governor of Tennessee, which is one of only seven states that has never had a female senator or governor. Tom Williams/CQ-Roll Call,Inc. hide caption 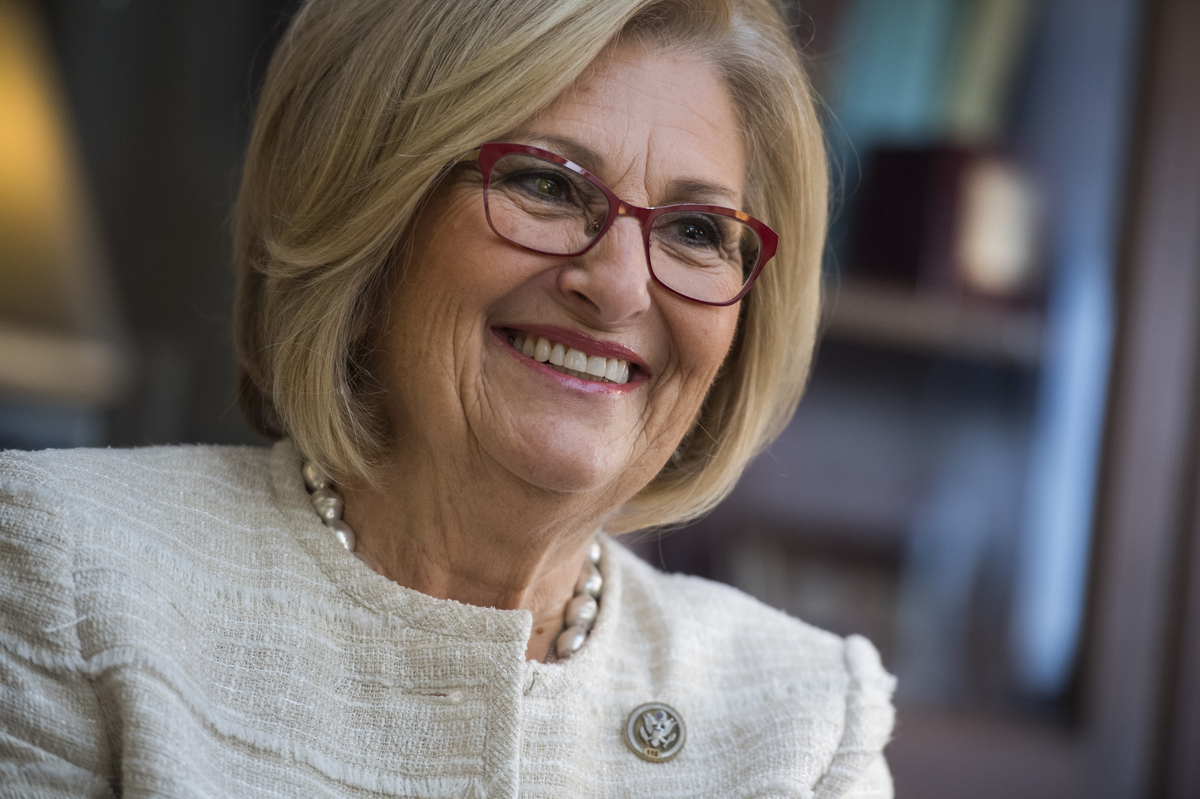 Rep. Diane Black is running for governor of Tennessee, which is one of only seven states that has never had a female senator or governor.

Both women have taken that approach in Washington. Blackburn has famously said she prefers to go by congressman instead of congresswoman because she thinks it's more gender neutral, and Black has adopted that same title.

Tennessee gave women the right to vote ... then fell behind

Back in Tennessee, female political observers say it's past time for the state to elect a woman to its top positions. After all, nearly a century ago, it was Tennessee that gave women nationally the right to vote, as the final state needed to ratify the 19th Amendment.

"It's about time, wouldn't you say?" laughs Barbara Trautman, president of the Tennessee Federation of Republican Women. She's sitting in the headquarters of the Shelby County Republican Party, surrounded by campaign signs and several volunteers, many of whom are wearing red "Marsha, Marsha, Marsha" shirts from Blackburn's campaign. 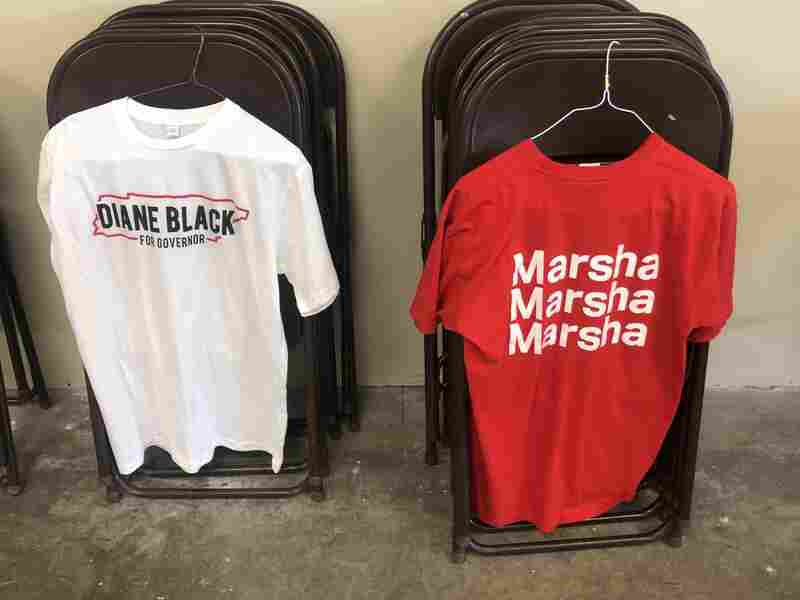 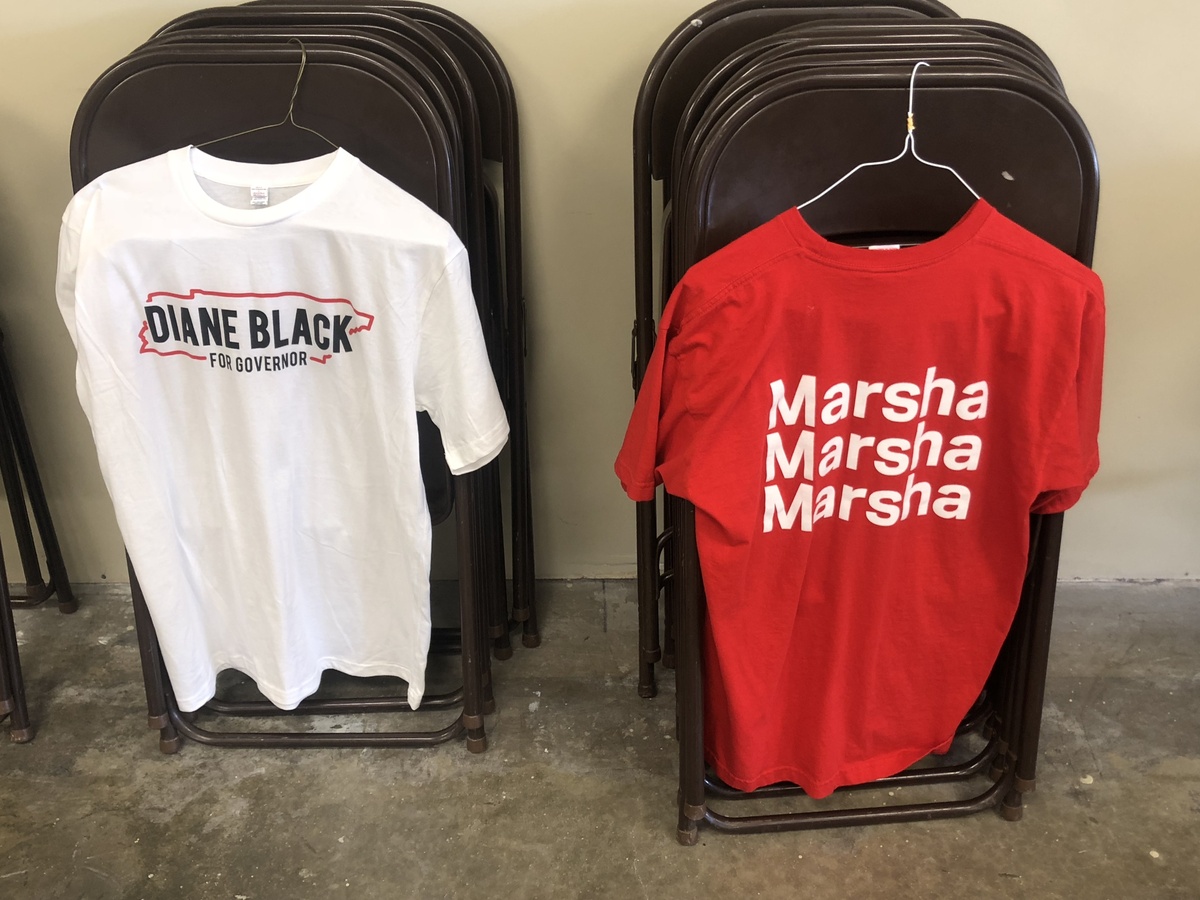 Campaign swag for Tennessee Reps. Diane Black and Marsha Blackburn is on display at the Shelby County Republican Party headquarters.

Trautman has to remain neutral until after the primary, but if Blackburn, who faces only nominal opposition, and Black in her much more competitive contest, advance, Trautman says it would be a good thing for the party and could help other women win at the local level across the board.

"It's part of the paving the way for the younger generation to want to achieve that too," Trautman said.

There have been other women who've achieved firsts statewide. In 2011, Republican Beth Harwell became the first female speaker of the Tennessee House of Representatives. Harwell is also running for governor, but in most polling she has lagged far behind Black and the other two frontrunners, businessmen Bill Lee and Randy Boyd.

In 1980, Democrat Jane Eskind became the first woman ever elected to office statewide, winning a seat on Tennessee's Public Service Commission, though that's no longer an elected board. Now, governor and senator are Tennessee's only statewide elected offices. Eskind was also the first woman to be nominated by a major party statewide in 1978, unsuccessfully challenging Republican Sen. Howard Baker for his seat. Back then, she faced a lot of pushback because of her gender.

"During the campaigns, there were many people who thought that I should go home and have a baby, as improbable as it was at the time," the late Eskind recalled in a video for the Tennessee Women's Hall of Fame.

In 1982, Susan Richardson Williams became the first female chairman of the Tennessee Republican Party. She said times have changed since she was party chair — for the better for women.

"I think the stigma of being a woman running for office is fortunately gone. I've heard some discussion about Republicans having two women running statewide and whether we've arrived enough to elect two women statewide, and I actually do," Williams said. "I think we're to the point in the South, in and around the country, where gender doesn't matter so much. Yes, it will be historic. But both of those women are qualified to serve in the offices that they seek."

National conservatives look to Tennessee in "year of the woman"

Nationally, a win by either Blackburn or Black would be important for conservative causes, according to Susan B. Anthony List President Marjorie Dannenfelser. Her group promotes anti-abortion rights candidates and has endorsed both women in their races.

"Tennessee stands out as a place that is really answering the call for women to run, and especially in the uniquely important way that these two women are very strongly pro-life women running for the highest level offices that Tennessee or any state can can offer," said Dannenfelser.

She said it's important for more conservative women to run, but the difference is that Republicans don't talk about their gender in the same way Democrats do.

"I think that the Democrats are far more invested in identity politics — so, 'Vote for me because of how I look and what my gender is.' I think that those reasons are legitimate as a supporting role, but not as the only reason, and so that is different," said Dannenfelser.

"This is a moment where the experience of women needs to be heard," Dannenfelser added about conservative women, especially in the wake of the #MeToo movement, "To put an R beside their name or a D or an I or whatever ... and exclude any women in this conversation, really does not serve women."

Blackburn's race could well be pivotal to Senate control this fall, and polling has shown she's neck-and-neck with Bredesen. In that contest, despite being a woman, she could struggle to keep women voters. A Mason-Dixon poll from April, which gave Bredesen a three-point lead overall, found that he wins women voters by 11 points.

Do Women Candidates Have An Advantage In 2018?

Both Black and Blackburn have heavily underscored their support of President Trump in their races, and while the president's approval ratings have fallen — especially among women — nationwide, they're banking that he can still help them in a state he carried by 26 points, even if Trump has a history of controversial comments about women and has fought off allegations of sexual misconduct.

"Women know that their economic security, their national security is in better shape" because of President Trump "and they are grateful for that — and that is primarily what they're talking about right now," Blackburn countered after her Portland event.