Fire officials in Greece say at least 74 people have died from surprisingly fast-moving wildfires that struck near Athens on Monday, with the death toll tripling in what has become a national tragedy. The fires have sent people scrambling to escape and have put intense pressure on fire and rescue agencies.

At least six major fires continue to burn in Greece, the national fire service says. The blazes have drawn power from strong winds to devastate homes and forests in towns near the Greek capital. Other areas hit by fire include the island of Crete.

Rescue workers warn the death toll is likely to rise, as they go through the scorched remains of hundreds of homes and cars. In addition to those killed, 164 adults and 23 children were injured, according to the fire service.

The danger has not let up: From 6 a.m. to 6 p.m. Tuesday, officials said, firefighters were called to face 18 forest fires.

Greeks trapped by fires in seaside resorts east and west of the capital have tried to flee by car, motorcycle — even by boat.

People on the beach waved down fishermen. Others just swam out. The Greek coast guard, which evacuated hundreds of survivors from beaches, said it had recovered at least four bodies at sea.

Early Tuesday, the Hellenic Red Cross workers made the gruesome discovery of 26 bodies near the badly burned resort village of Mati, in the Rafina area east of Athens. It's a popular vacation spot for older Greeks and for kids attending summer camps.

Rescue workers said the victims included children. The charred bodies were found huddled together. Some appeared to be hugging. Red Cross staff said it appeared the victims had been trapped by the fire just a few yards before reaching the sea.

NPR went to the the village of Mati, now largely evacuated. The charred remains of homes still smoldered. Sooty heaps of scorched cars lined the street.

Architect Yiannis Orphanos inspected his charred home not far from the spot where the 26 bodies were found. Rescue workers told him about the victims.

"They were surrounded by thick smoke and were trying to make their way to the beach," Orphanos told NPR. "But because of the smoke, they must have found it hard to orient themselves. They never made it to the beach. The smoke overwhelmed them."

He said he can't stop thinking about them. "The fact that they were hugging," he said, shaking his head, "hugging as the smoke overwhelmed them." He hugged his own son. "We are lucky," he said.

A friend had been staying at Orphanos' house and had fled immediately with her dogs as soon as she saw huge plumes of smoke. "A good thing, because look what happened," Orphanos said.

Among the first to flee Mati were some 50 residents and the staff of a foundation run by a monastery. They included monks, nuns, retirees in a monastery-run rest home and 10 teenage orphans, according to Panos Tzilavis, who runs the the Marathon Beach Resort in Nea Makri.

Tzilavis got a call that the group needed a place to stay, and he took them in for free.

"They arrived exhausted and stressed in the middle of the night," he said. "They spoke about how they left as soon as they saw the flames. They were afraid they'd burn up."

Tzilavis said he is trying to make the group feel as comfortable as possible. Every few hours, locals dropped off food, juice, clothes and shampoo for them.

NPR asked to speak to the survivors, who were all in hotel rooms, but a representative of the Greek Orthodox Church forbade them to speak.

Greece has declared a state of emergency. Prime Minister Alexis Tsipras called for three days of national mourning. Several European Union countries, as well as the U.S. and Israel, have offered to send help.

"Europe will stand by our Greek friends in these difficult times," tweeted European Council President Donald Tusk, writing in both Greek and English. "Help is on its way."

The U.S. Embassy in Athens — which issued alerts about the dangerous fires on Monday afternoon — said American fire experts are visiting Greece to meet with officials to discuss how U.S. agencies can help. 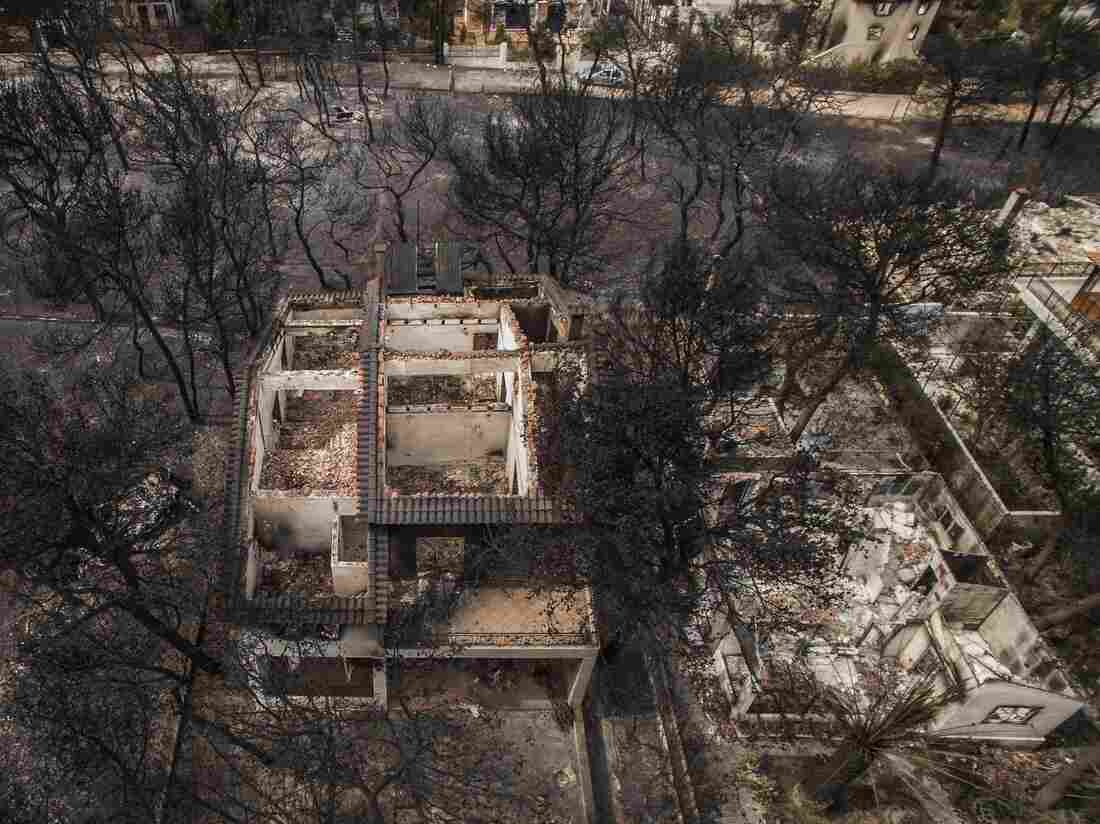 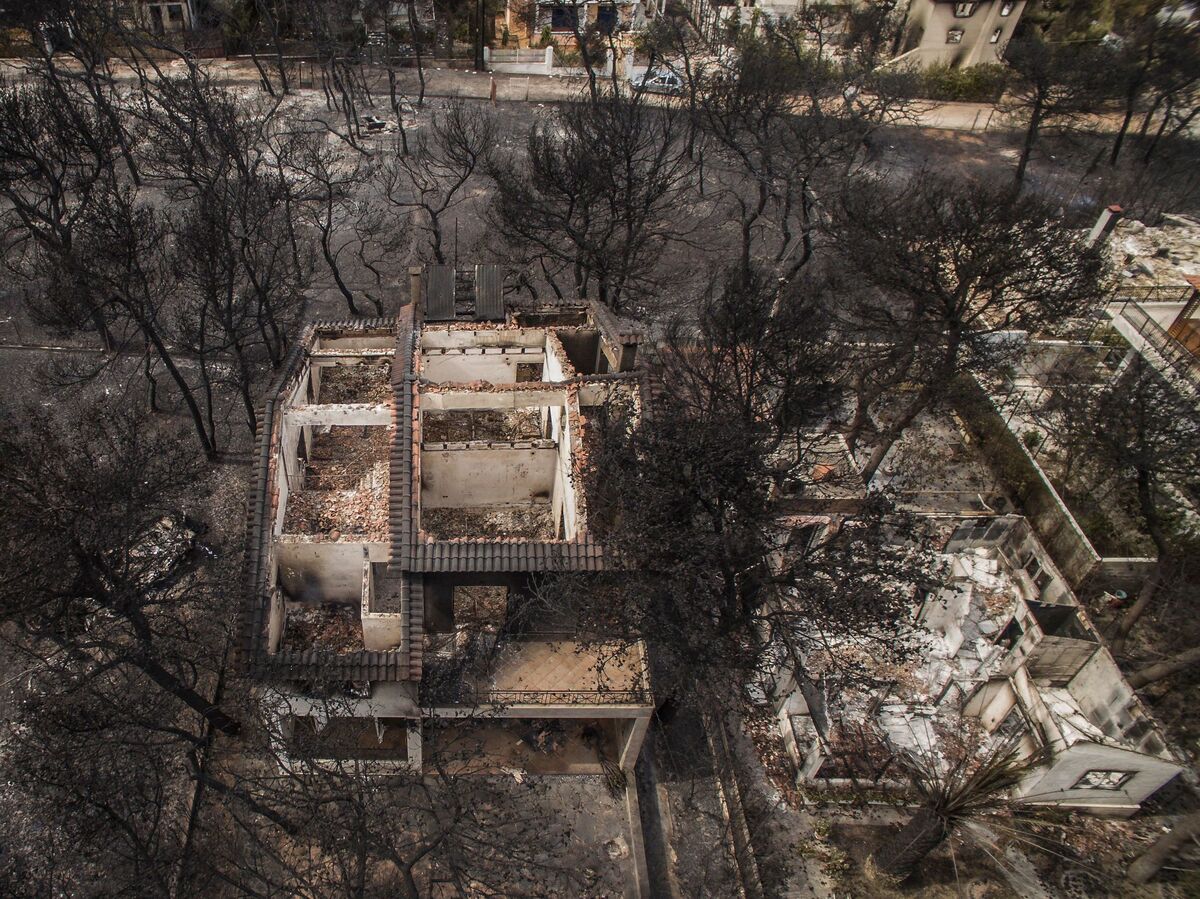 Wildfires left behind burned-out shells of homes in the village of Mati, near Athens. Greek Red Cross workers discovered 26 bodies in the devastated resort village.

Greek firefighters battled the flames throughout the night. The worst fire broke out east of Athens near the town of Rafina. Other fires raged west of Athens in Kineta and to the north, around the towns of Pendeli and Kalamos.

Tsipras cut short his visit to neighboring Bosnia on Monday and quickly returned to Athens. He told reporters that his government will do "whatever is humanly possible to control" the fires.

He also pleaded with Greeks in affected areas to leave immediately. TV footage showed several residents trying to fight the fires with garden hoses or buckets filled with water.

"What's most important now is your life," he said. "Properties and material wealth can be replaced. Human lives cannot."

Wildfires are not unusual during Greece's hot, dry summers. Dozens of people died during an especially fiery summer in 2007. But Monday's blazes near Athens spread so quickly that they seemed to catch everyone off guard.

In the towns of Penteli and Rafina, northeast of Athens, children were evacuated from summer camps. Skai TV news reported that residents and vacationers fled to nearby beaches in Rafina, where they were rescued by the coast guard. Ten panicked tourists, reportedly from Denmark, also fled a beach by boat. Five have been located and rescued.

At least three villages have been evacuated. Evangelos Bournous, the mayor of the seaside town of Rafina, told reporters that he has seen many homes go up in flames.