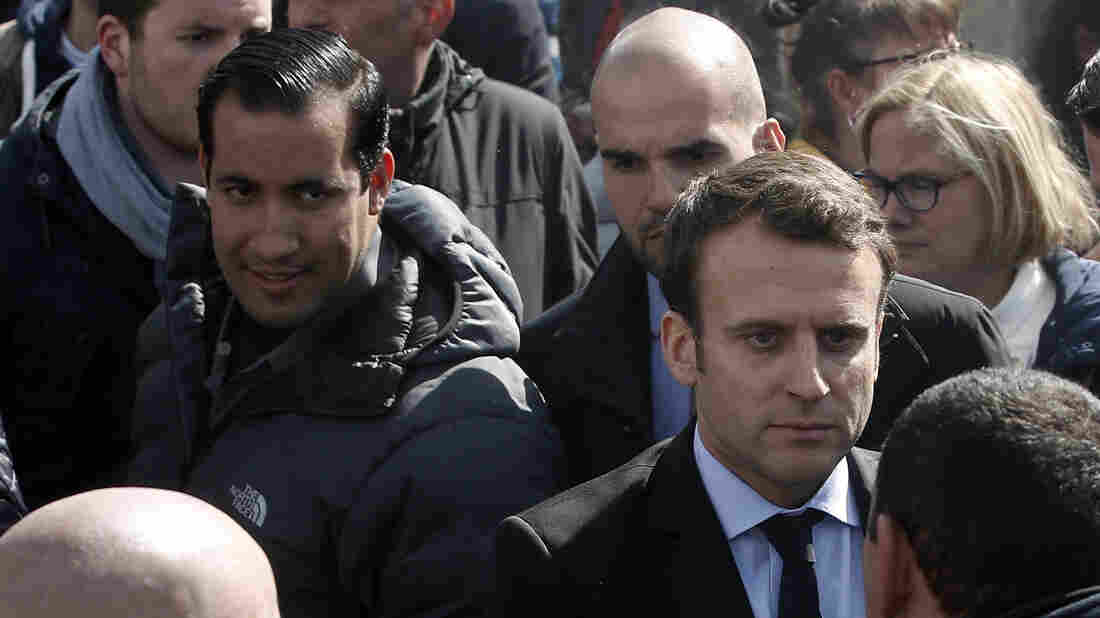 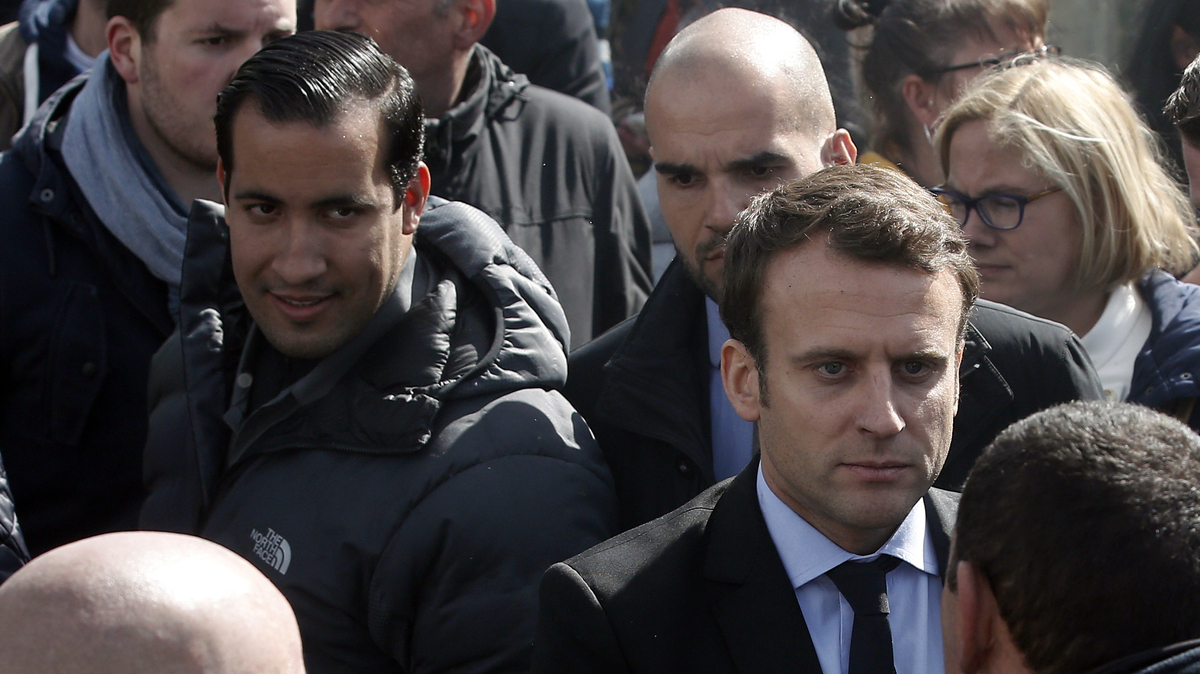 Emmanuel Macron (right) is flanked by his bodyguard, Alexandre Benalla (left) in Amiens, France. Benalla was filmed in May beating protesters during labor demonstrations.

France is consumed with a presidential scandal the media is dubbing "L'Affaire Bennalla" and "Benallagate." The scandal involves French President Emmanuel Macron's former security aide, Alexandre Benalla, who was identified as beating protesters in a video of May Day demonstrations.

The video, showing a helmeted man assaulting protesters, first appeared on Twitter hours after the incident, according to France 24. That was May 1. It wasn't until last week — nearly three months later — that the man was identified by the French newspaper Le Monde as 26-year-old Benalla, Macron's bodyguard.

In the video Benalla is wearing a police helmet and armband. He is shown wrestling with a female protester, and grabbing a male protester by the neck and hitting him several times.

It remains unclear how Benalla obtained the police helmet and armband, and why the incident was not reported to prosecutors when officials first learned of the video on May 2, according to France 24. A day later, Benalla was quietly given a 15-day suspension, and then returned to work.

July 20 Benalla was fired, after Le Monde identified him. He was then charged with assault.

The incident has left many questions about how the bodyguard was vetted and hired, and why it took so long for the presidential palace to announce it was Benalla in the video.

Benalla has a checkered past. The Times of London reports he was previously dismissed for a hit-and-run incident while chauffeuring a government minister. He allegedly wanted to buy weapons for Macron's presidential campaign security team last year, according to emails posted on the Wikileaks website. He pushed a news photographer away "violently and ripped his accreditation off him earlier this year after he came too close to the president at a speech in Caen."

Questions also remain over the relationship between Benalla and the Macrons. Several media outlets, including The New York Times, reported on special privileges Benalla was accorded as a "favored" member of Macron's inner circle, including "a presidential apartment on the fashionable Quai Branly in Paris, a chauffeured car and a special legislative floor pass."

Publications such as the right-wing Le Figaro are calling it a "grave political crisis" for Macron, a 40-year-old former investment banker who was elected president last year. The scandal comes at a time when Macron is trying to reform France's economy. His plans include cutting more than 100,000 public-sector jobs and linking pay raises to job performance.

Thousands were out on May Day to protest Macron's plans. The protests got out of hand, as NPR's Scott Neuman reported:

"More than a thousand anarchists – many wearing masks and black hoodies — tossed petrol bombs during the annual May Day rally in Paris, as riot police deployed water cannon and teargas. Nearly 200 were arrested.

Benalla said through his lawyers that he was "lending a hand" to police during the May 1 demonstrations, according to AFP, and that his conduct was being exploited for "media and political ends."

The controversy is energizing opposition leaders, and adding fuel to criticism of Macron as having a monarchical management style. Last year NPR's Eleanor Beardsley reported, "With his careful appearances and staging of events, critics say ... Macron appears to believe his role is to be France's elected monarch."

On Monday, Macron's interior minister Gérard Collomb appeared before a parliamentary investigative commission to face questions over the matter, and the head of Macron's cabinet, Patrick Strzoda, testified on Tuesday.

According to Reuters, the scandal is already resulting in falling approval ratings for Macron:

"According to an IPSOS poll released on Tuesday, Macron's popularity has fallen to 32 percent, down four points since June and his lowest level since September 2017."